A beach, mermaids and a parade take over Tucson's Fourth Ave.
Share this
1 of 4 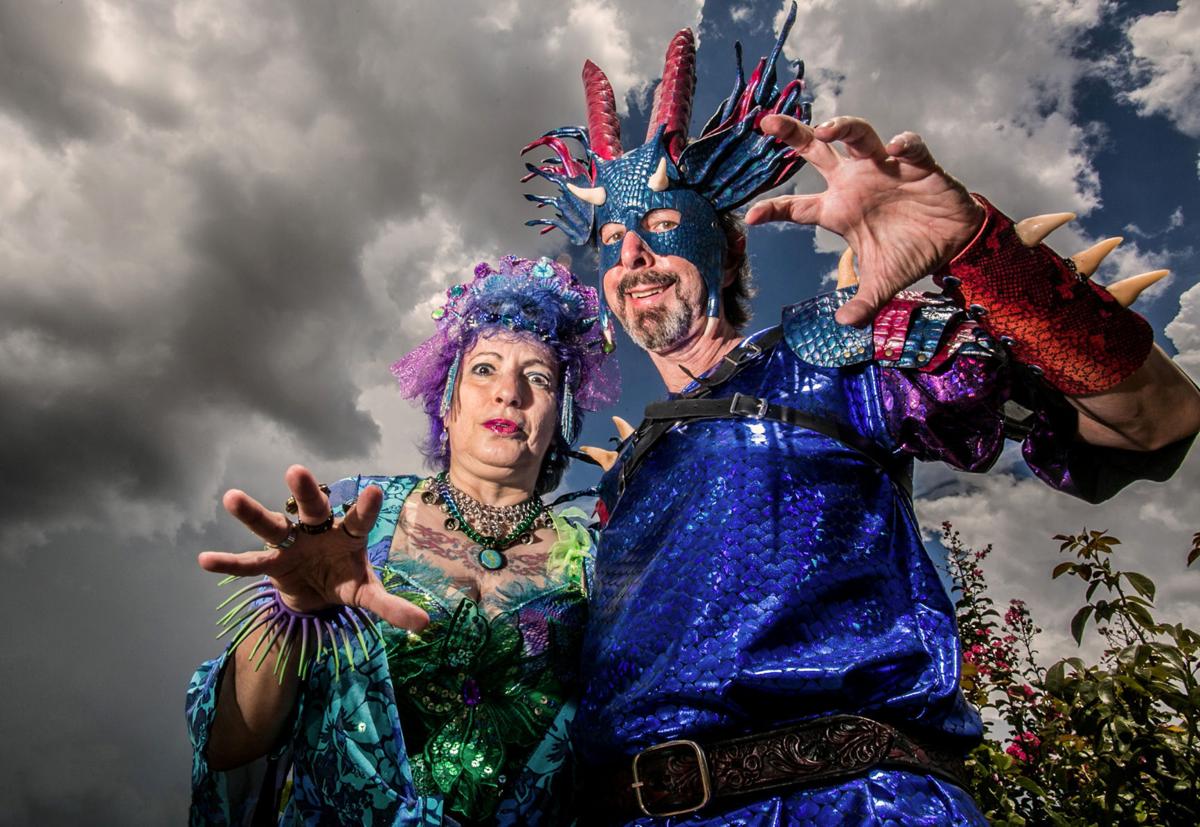 Jill and Loren Darklyng get into the spirit at their home in Oro Valley. They were involved in the early days of the Coney Island Mermaid Parade, which inspired Tucson’s festival. 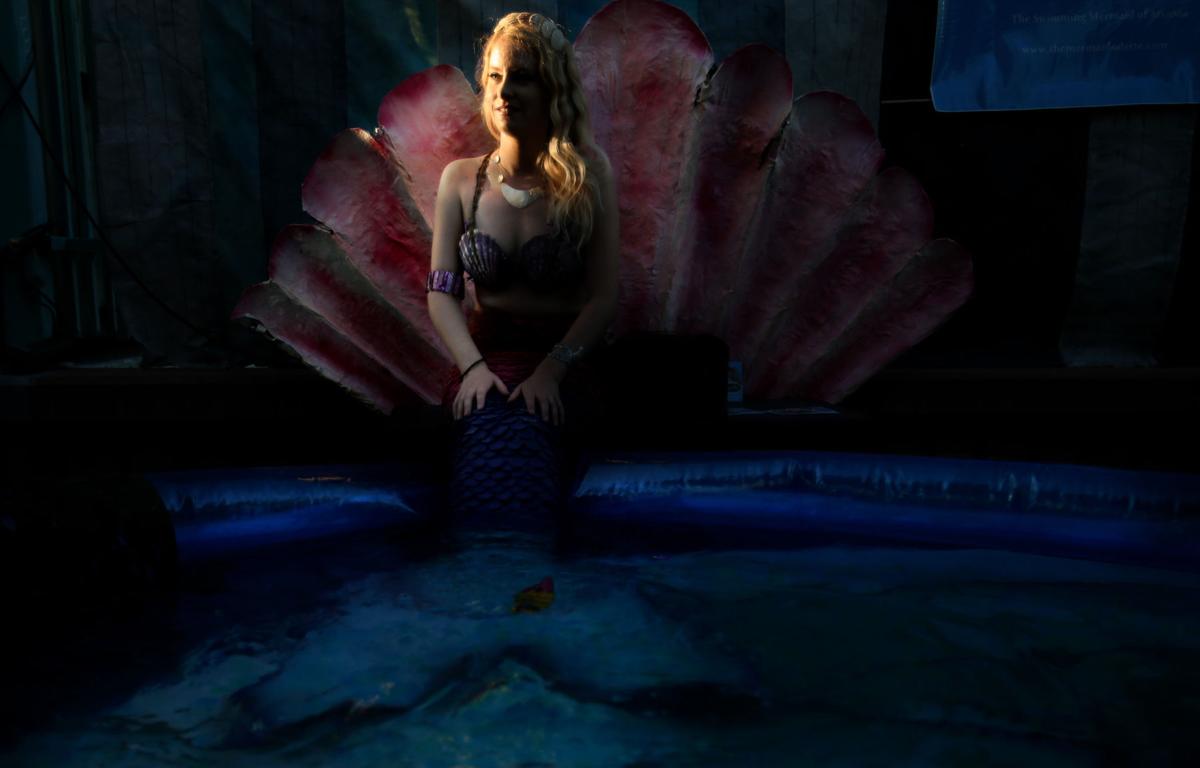 The last shaft of the day’s light struck Mermaid Odette (Emy Higdon) as she held court from her watery throne in Haggerty Plaza during the 2016 festivities in Tucson. 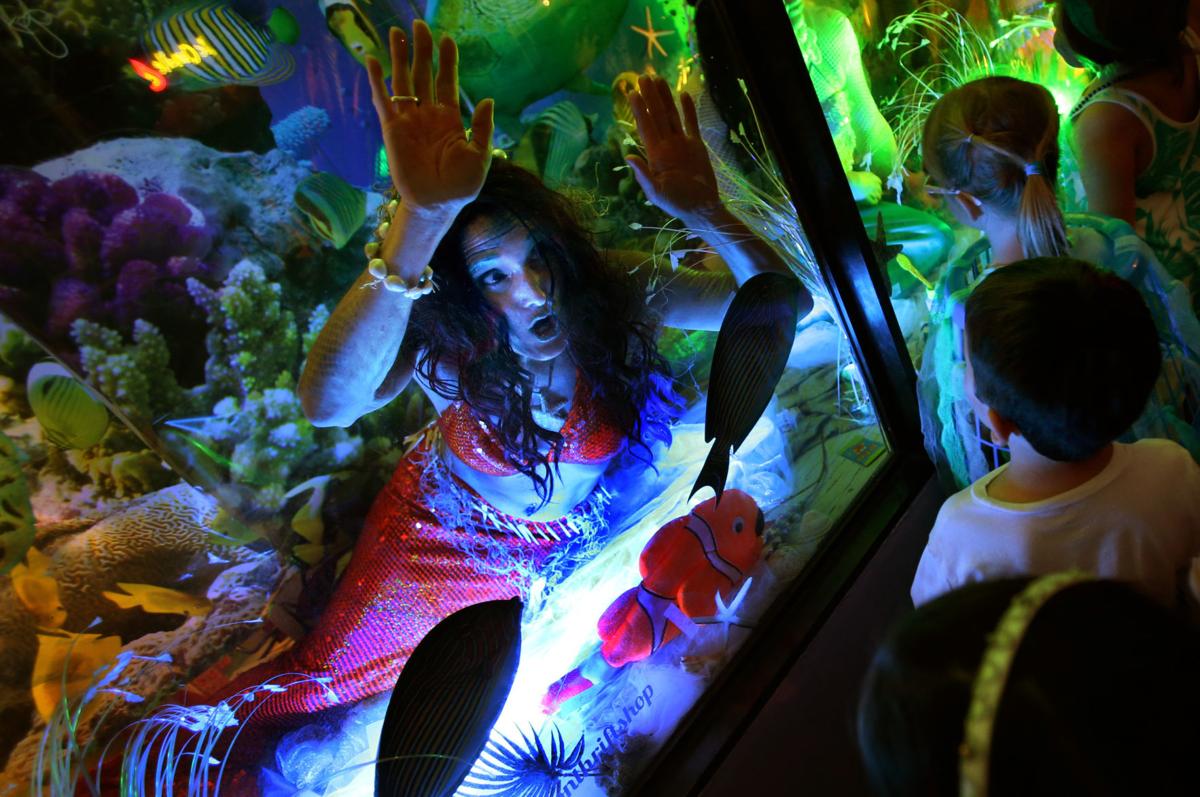 Michelle Ruffo, known as Mermaid Michelina during Return of the Mermaids, presses against a window transformed into an “aquarium” at Tucson Thrift Shop. 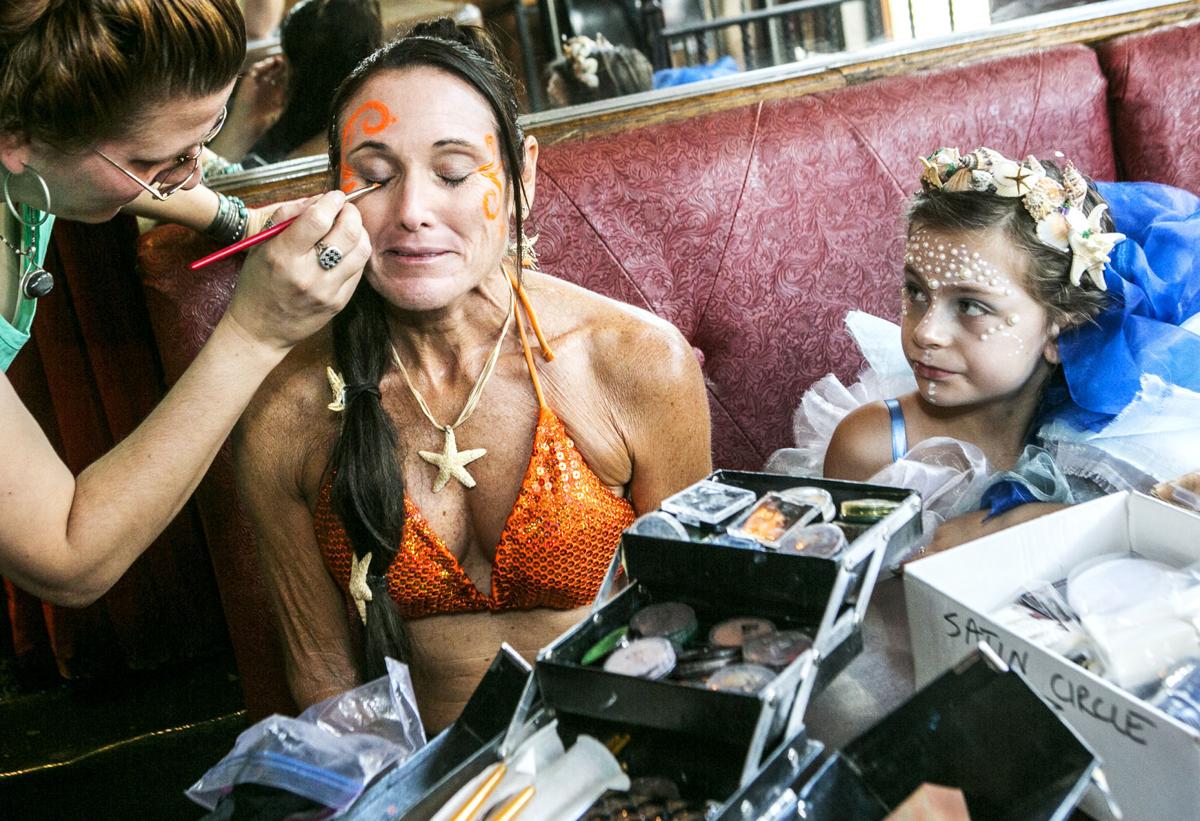 Come Saturday, Aug. 12, Fourth Avenue will be flooded with mermaids and sea creatures for the 4th annual Return of the Mermaids.

“When we think of ourselves as mermaids, it has more to do with a wild spirit,” Lizzie Mead, the event’s co-organizer, says. “For me and many others, mermaids represent freedom.”

Although you don’t have to dress up, it is encouraged.

“It’s more fun if you’re dressed up, even if you’re not a kid,” Mead says. “Just cut back and embrace the strangeness of it.”

Legend has it that at one point in our history, Tucson was underwater. At least, that’s what David Aguirre, co-organizer of the event, says.

“David came up with the whole folklore for why the Return of the Mermaids event happens,” Mead says.

Mead and Aguirre say that since we’re no longer underwater, when the monsoon season comes around, the rain brings back the mermaids.

“It’s almost like mermaids are dormant until the monsoons ignite,” Mead says.

Mead says that Aguirre had the idea for the mermaid parade, so he reached out to Facebook friends who were equally interested.

“I already had a date set for a separate event, so David and I got together and planned the parade together,” Mead says. And just like that, the Return of the Mermaids event was born.

Tucson’s mermaid event is inspired by the Coney Island Mermaid Parade in New York, which has been around for 35 years.

And get this: two of Coney Island’s mermaids now live in Tucson.

Loren Darklyng moved to Tucson three years ago with his wife, Jill.

“I had been wanting to move out of New York City for a while,” Loren says.

The couple began taking part in the Coney Island Mermaid Parade more than 25 years ago when there were only three dozen spectators. Now there are 500,000.

They discovered Tucson’s mermaid festivities through the Tucson Steampunk Society, and, as you can imagine, they became interested.

“There’s a lot of overlap in different costuming groups in Tucson,” Loren says. “It shows that creativity isn’t limited to one group — they are welcome to all areas.”

Although Tucson’s 8,000-spectator parade is much smaller than Coney Island’s, Loren says he finds Tucson’s creativity to be equal to New York’s.

“People put a lot of care and inspiration into their costumes here,” Loren says. “It makes me feel very much at home.”

In terms of his costume, Loren puts a new one together every year.

Mead stresses that you don’t need a store-bought mermaid costume to look amazing.

“Last year, someone built their mermaid costume entirely out of trash, like soda tabs and bubble wrap,” Mead says. “She said she spent $6 on the costume and it was really cool. The idea is that before the parade even happens, you’re already engaging in creativity.”

Mead says that while many mermaids simply wear a costume, others develop their own character.

“Some people want to be really beautiful; some want to be edgier or galactic,” she says. “Some have regional themes or color themes. We see a lot of creative variations in costume and character.”

The event extends past mermaids to also include mermen, sailors, fishermen and sea creatures.

“Just come and dress as though you live under the sea,” Mead says.

Emy Higdon, also known as Mermaid Odette, will be the event’s guest of honor.

Higdon says that Mermaid Odette is originally from France. She joined the circus and traveled to the United States, the story goes, but her world was turned upside down when her tank fell off the circus truck and she ended up in Arizona’s desert.

“Being Mermaid Odette is fun,” Higdon says. “For me, it’s a tool. I can use the mermaid to teach and bring awareness to the ocean. It also means that I get to bring a little bit of magic into kids’ lives. For a little bit of time, something mythical becomes a reality, which sparks imagination.”

Higdon gets to be Mermaid Odette a few times a month when she performs at parties and attends public events.

The event is jam-packed with festivities.

The day begins at noon with a mermaid art show at Pop Cycle, followed by a 1 p.m. show at Tucson Improv Movement. Tickets for the improv show are available online.

At 4 p.m., Tucson Thrift Shop will house Mermaid Michelina. From 5 to 8 p.m., folks will have the chance to meet Mermaid Odette at Haggerty Plaza. Twelve-year-old Mermaid Kailee will also be present.

The Surf Broads, an all-female band, will take the stage at 5:30 p.m., and a costume contest will begin at 6:30 p.m. When 7 p.m. hits, Lykiska Dance will begin their performance, followed by Flam Chen and the Tucson Circus Arts at 7:45 p.m.

The parade will start at 8 p.m. in Haggerty Plaza. Everyone in the parade should be costumed or holding the hand of a child who is costumed.

The event will also have activities at the “Beach” in downtown Tucson, near Hotel Congress. From 3 to 10 p.m., the Beach will showcase 25 art vendors, and there will be music, food trucks, and even more shows, such as fire-spinning and a body-positive mermaid pageant at 9 p.m.

What: Return of the Mermaids.

Cost: Event is free with the exception of Tucson Improv Movement show and admission to Surly Wench Pub.

Pearl Christiansen, 71, a retired school teacher and resident of tiny mining town of Gleeson since 1920, witnessed several UFO's in 1968. She …

There will be staggered traffic impacts on Fourth Avenue and Sixth Street.

Jill and Loren Darklyng get into the spirit at their home in Oro Valley. They were involved in the early days of the Coney Island Mermaid Parade, which inspired Tucson’s festival.

The last shaft of the day’s light struck Mermaid Odette (Emy Higdon) as she held court from her watery throne in Haggerty Plaza during the 2016 festivities in Tucson.

Michelle Ruffo, known as Mermaid Michelina during Return of the Mermaids, presses against a window transformed into an “aquarium” at Tucson Thrift Shop.