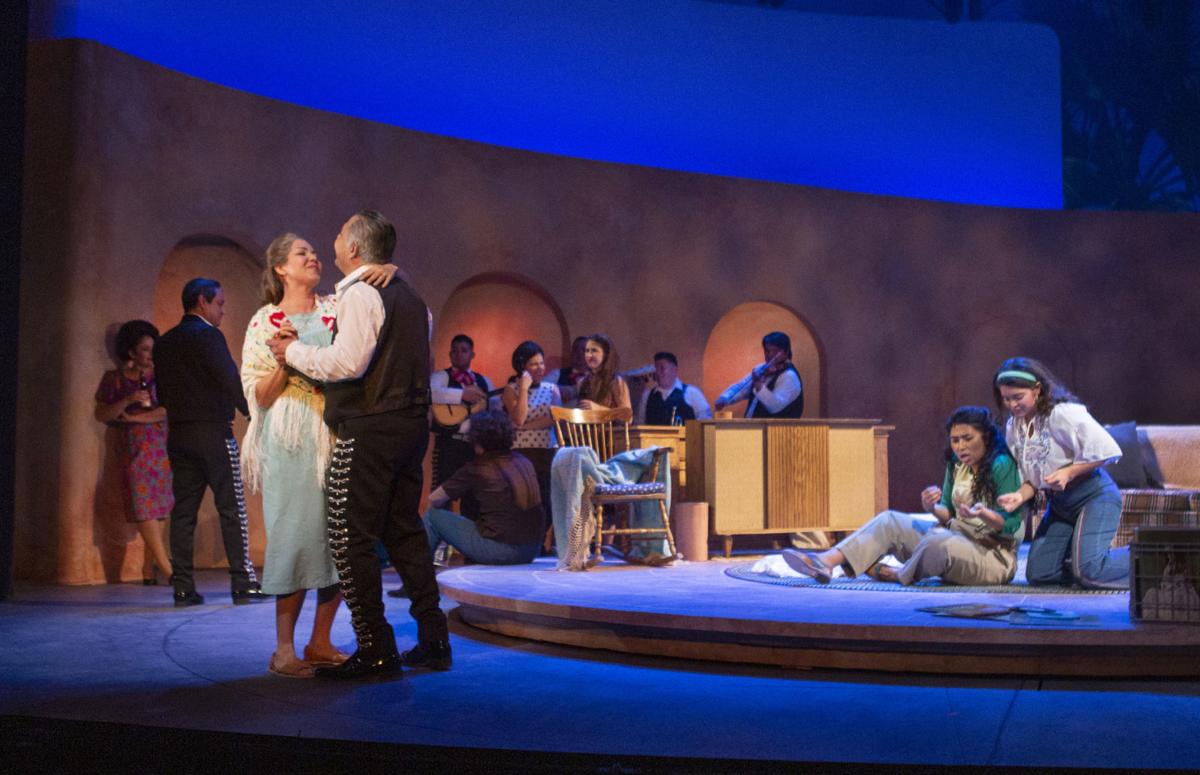 It was love at first viewing.

The Arizona Theatre Company’s current offering, “American Mariachi,” is so exuberant, so joyful, so full of heart that it is impossible not to fall in love with it.

The José Cruz González play is many things: A look at second-wave feminism, a crash course on mariachi music, a study on forgiveness and a nod to the power of art.

It is all those things wrapped up in a simple story about family: It’s the 1970s and Lucha (Christen Celaya) longs to burst out and be her own person. But her father (Danny Bolero) isn’t interested in her future. What he wants is for Lucha to stay home and help care for her mother (Diana Burbano), who has dementia. When Lucha discovers that her mother responds to mariachi music, she decides to form a mariachi group to play for her. But hey, it’s the early 1970s. Girls just don’t go around playing mariachi.

Christopher Acebo, in his directorial debut, has shaped a production that moves with the rhythm of the music woven in and out of the play.

And a solid cast brought the story and the mariachi to vivid life. Burbano seamlessly traveled back and forth between someone who doesn’t recognize her own daughter to a vivacious and earthy woman in the memory scenes. Bolero was fierce as the father who starts out stern and unforgiving and eventually settles in a place where his heart is open.

Celaya’s journey from an obedient daughter to a young woman who is not afraid to use her powerful voice was well-rooted. And Satya Jnani Chavez as Hortensia, Lucha’s best friend, infused her character with an energy and attitude that brought both laughter and a recognition of a woman ready to burst out and make her mark.

Lucha and Hortensia spearhead the all-female mariachi band and pull together a motley crew of can’t-play-instruments women to join them. They were brought to life by Alicia Coca, Marlene Montes and Osiris Cuen. Each gave distinction and zip to their roles.

Most actors played multiple roles, but you’ll have to read the program to discover that — thanks to often-witty costumes (Kish Finnegan is the designer), hairpieces and good acting, it was hard to tell.

Especially with Sol Castillo, who plays Padre Flore and Mino, a family friend who agrees to teach the women mariachi. His Mino was contemplative and pained. His Padre Flore was befuddled and spoke Spanish at a breakneck speed. There were many laughs on opening night, and Castillo earned his fair share with his short appearance as the priest.

Of course, mariachi music is another character in this play. Giving the music the energy and passion it requires are a group of men who all got their start in the youth group Los Changuitos Feos de Tucson: Esteban Dagnino, Francisco Javier Molina, Ali Pizarro and Antonio A. Pró. Tucsonan Stephanie Swift Molina was like a spirit who plays a mean violin as she floated in at crucial moments. Her music underscored mournful and happy moments.

There are flaws to this play — sometimes it’s predictable, and it occasionally stumbles into saccharine territory.

But the pure joy and deep heart in “American Mariachi” makes any shortcomings disappear.

M. Night Shyamalan will be the president of the 2022 Berlin Film Festival jury

M. Night Shyamalan will be the president of the 2022 Berlin Film Festival jury

Mariachi music was the soundtrack of José Cruz González’s youth.

As a child, Daniels learned to love theater watching plays and taking classes at ATC.

The musical will feature a 14-piece orchestra.