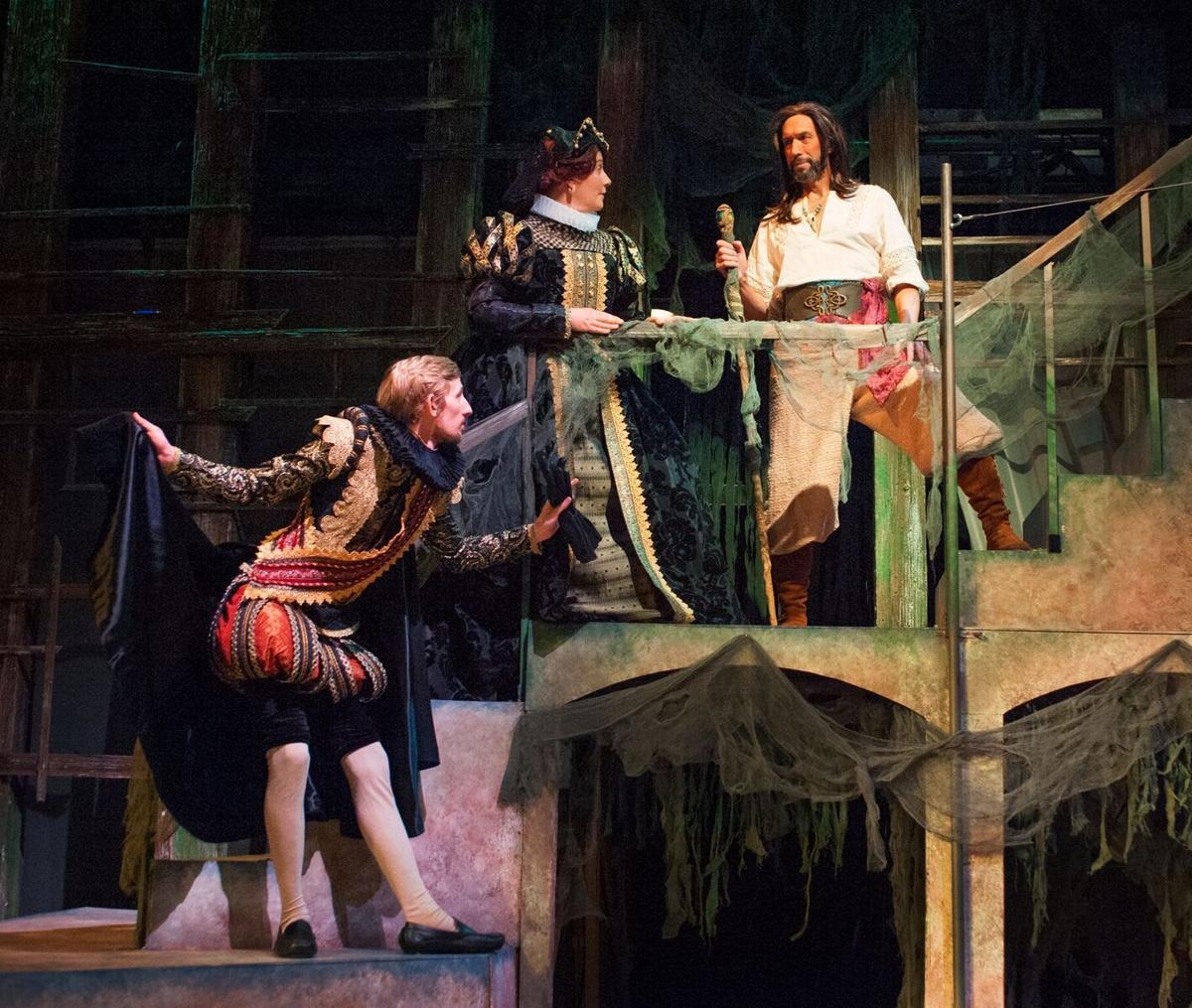 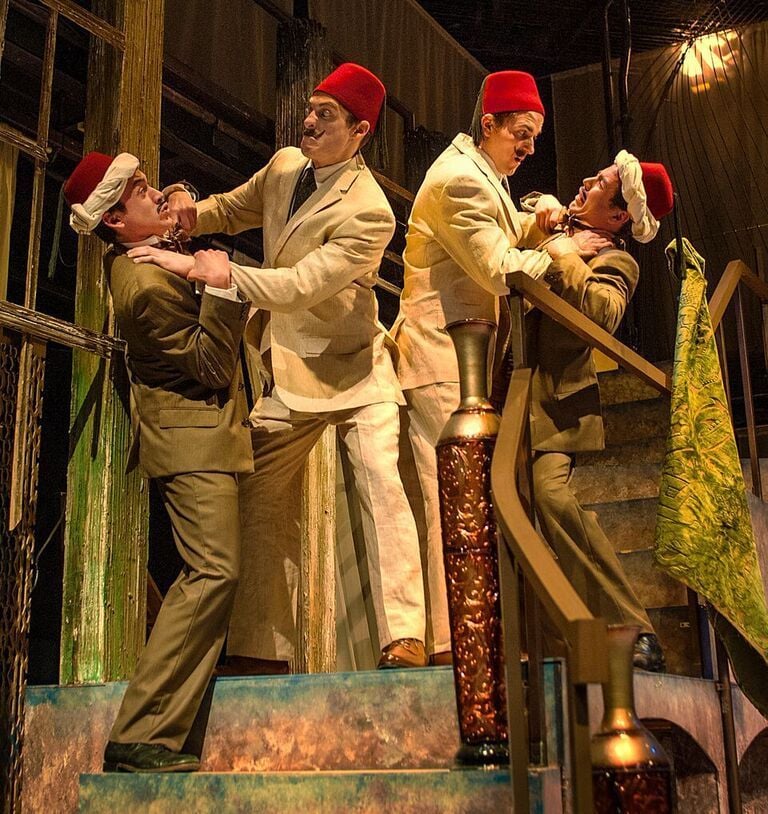 What could possibly go wrong with two sets of twins Dromio of Ephesus (Connor Griffin), Antipholus of Ephesus (Ethan Kirschbaum), Antipholus of Syracuse (Kasey Caruso) and Dromio of Syracuse (Keenan Larson) who were separated at birth, but find themselves grown up in the same town thats renowned for sorcery? (Photo by Ed Flores.) — Credit: Ed Flores 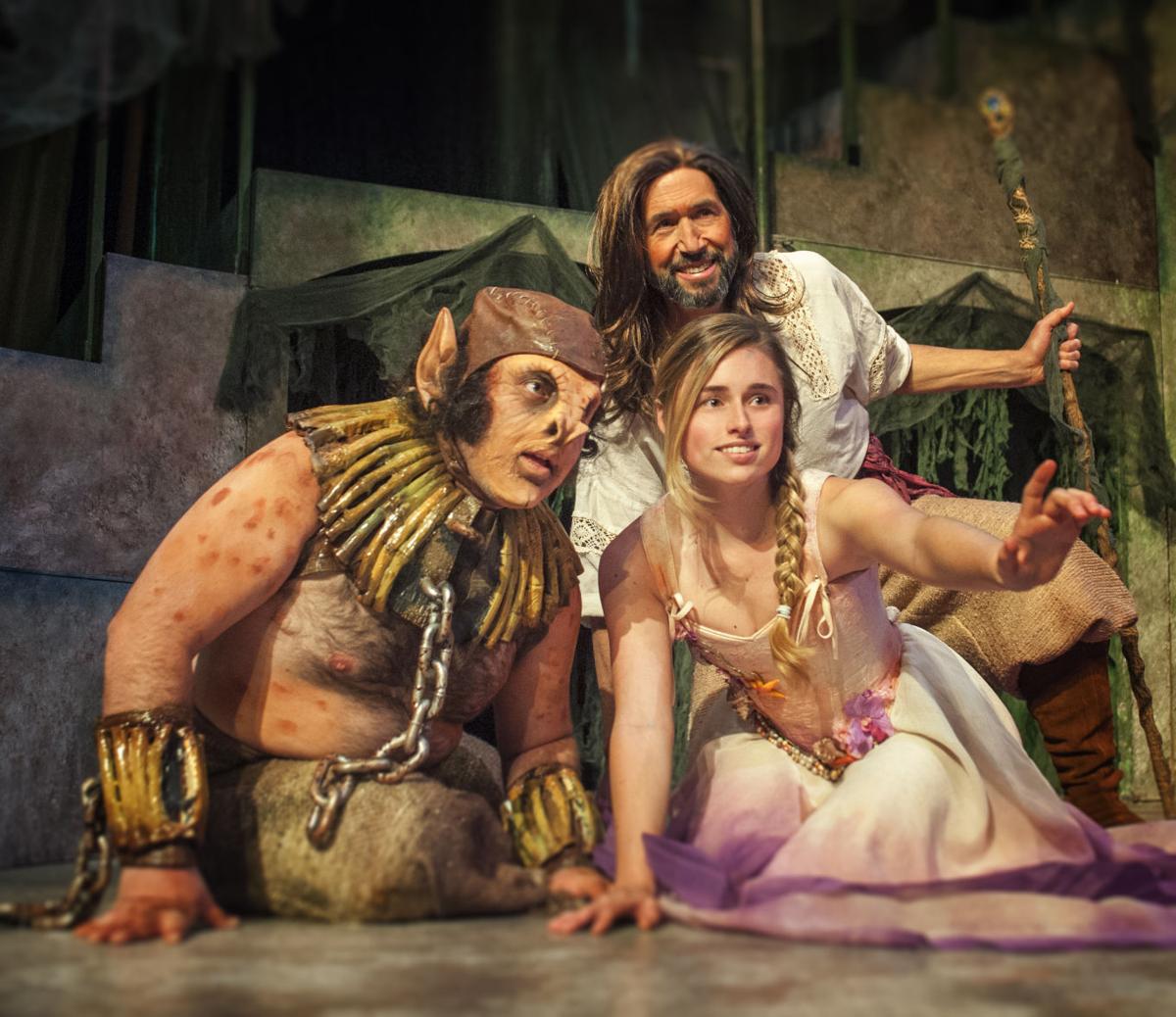 Prospero (Kevin Black), the magician, and his daughter, Miranda (Tyler Reaser), look out to the sea with Prospero’s slave, Caliban (Charlie Hall) during happier times.

Mounting a Shakespeare play is always a challenge.

So you can imagine the effort involved in staging two of his works at the same time.

It’s the task the Arizona Repertory Theatre has taken on, presenting “The Comedy of Errors” and “The Tempest” in repertory. “Comedy” opens in previews Sunday, Feb. 28, and “Tempest” March 6. Thereafter, the two will play on alternate days.

The Shakespeare bonanza has been timed with the visit of the First Folio to the Old Pueblo, which is at the Arizona State Museum through March 15.

The Star sat down with director Brent Gibbs to talk about the plays.

Why do these two plays in repertory?

“There are several reasons. The university is hosting the First Folio. There were 18 plays that were published for the first time in the First Folio, and these are two of those plays. ... Then, there is also the reason that these are plays from the beginning of Shakespeare’s career. ‘The Comedy of Errors,’ is one of the first that he wrote, and ‘The Tempest’ was one of the last that he wrote. It is a lovely chance to be able to have the bookends of his career represented in these plays that would have been lost if the First Folio had not been published.”

Other than the playwright, are there any other similarities or common themes in these two plays?

“I think there are similarities in terms of journeys of discovery. In ‘The Comedy of Errors,’ the twins find each other throughout the course of the play after many mishaps. Egeon, their father, is reunited with Emilia, their mother, so they discover each other. In ‘The Tempest,’ at the end of the play, Gonzalo mentions that on this island where no one was their own (person), everyone found themselves. Ferdinand finds Miranda; Prospero receives his dukedom back. But for a large portion of the play people are at odds with themselves. And then everything is put back in order, which is why it’s a comedy.

What challenges do staging two plays in repertory present?

“It is just very difficult to find enough time to give everything the attention that it deserves, and yet, that is our job. We started rehearsals for ‘The Comedy of Errors’ in November, so we’ve been at it for a while. And then we picked up with ‘The Tempest’ as soon as this semester started. We have spread it out as long as we thought we could.”

Are you using the same cast?

“It is ... primarily the same cast. For example, the actor playing Prospero in ‘The Tempest’ doesn’t appear in ‘The Comedy of Errors,’ but that’s really the only difference in terms of the cast. Using the same cast is a common repertory model. People may have a smaller role in ‘The Comedy of Errors’ but a larger role in ‘The Tempest’ and vice versa.”

For the untrained ear, what is the best way to take in a Shakespeare play?

“The thing about going to see a Shakespeare play is that there is a short period of adjustment at the beginning of the show where your ear becomes acclimated to the language. Shakespeare wrote as people talk. There is a perception that it is a foreign tongue, when in reality it is not. The rhythms that Shakespeare wrote in are the rhythms that we speak in normally. The language can be sometimes somewhat archaic, but we stress clarity in terms of the productions that we produce. That means the clarity of the word, the clarity of the pictures, the clarity in terms of the design, so that everything can help the audience.”

What: Arizona Repertory Theatre's production of Shakespeare's "The Tempest" performed in repertory with "The Comedy of Errors."

Where: Tornabnene Theatre in the UA Fine Arts Complex near the southeast corner of Park Avenue and Speedway.

Running time: "Comedy," 90 minutes with no intermission; "Tempest," about two hours, with one intermission.

"The Comedy of Errors" — One of Shakespeare's shortest play, it is also his more farcical. Mistaken identity is key to the humor. Two sets of identical twins are separated shortly after birth thanks to a storm at sea. They accidentally get back together in the most ridiculous way. Look for puns, confusion amongst the characters, love and laughs. Pure comedy.

"The Tempest" — A sea storm opens this play. It's caused by the magic of Prospero, who is on an island with his daughter Miranda, watching as a boat carrying the King of Naples rocks back and forth. Prospero had been banished to the island, after a treachery by his brother, Antonio, who is on that rocking boat. Those on the ship are knocked ashore in three different groups, and Prospero has plans to manipulate them all to bring love to his daughter and regain his rightful place as Duke of Milan. Though classified as a comedy in the First Folio, there are some tragic elements to it. As well as romance.

The UA Repertory Theatre cast infuses an abundance of energy into the play.

AZ Rep's "The Tempest" is a magical night of theater

Shakespeare's First Folio will pay an extended visit to Tucson

The University of Arizona Library snagged a Tucson stop for the First Folio tour.

Shakespeare, Poe, national parks at the Tucson Festival of Books

The eighth edition of the community literary festival is set for March 12-13.

Launching new books at festival boosts sales and enables authors to interact with readers, other authors.

This is Tucson: Weekend of March 6th

From Shakespeare to steampunk, Irene and Hannah discuss Tucson activities this weekend

What could possibly go wrong with two sets of twins Dromio of Ephesus (Connor Griffin), Antipholus of Ephesus (Ethan Kirschbaum), Antipholus of Syracuse (Kasey Caruso) and Dromio of Syracuse (Keenan Larson) who were separated at birth, but find themselves grown up in the same town thats renowned for sorcery? (Photo by Ed Flores.) — Credit: Ed Flores

Prospero (Kevin Black), the magician, and his daughter, Miranda (Tyler Reaser), look out to the sea with Prospero’s slave, Caliban (Charlie Hall) during happier times.