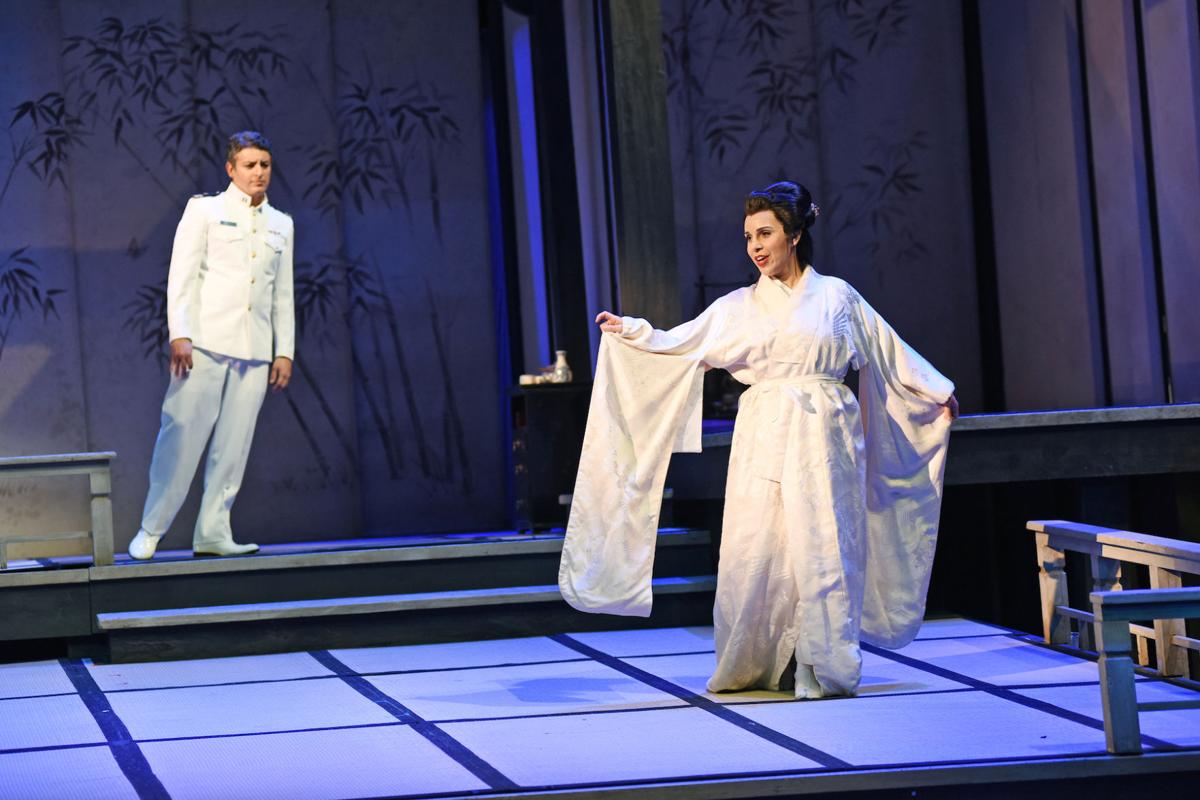 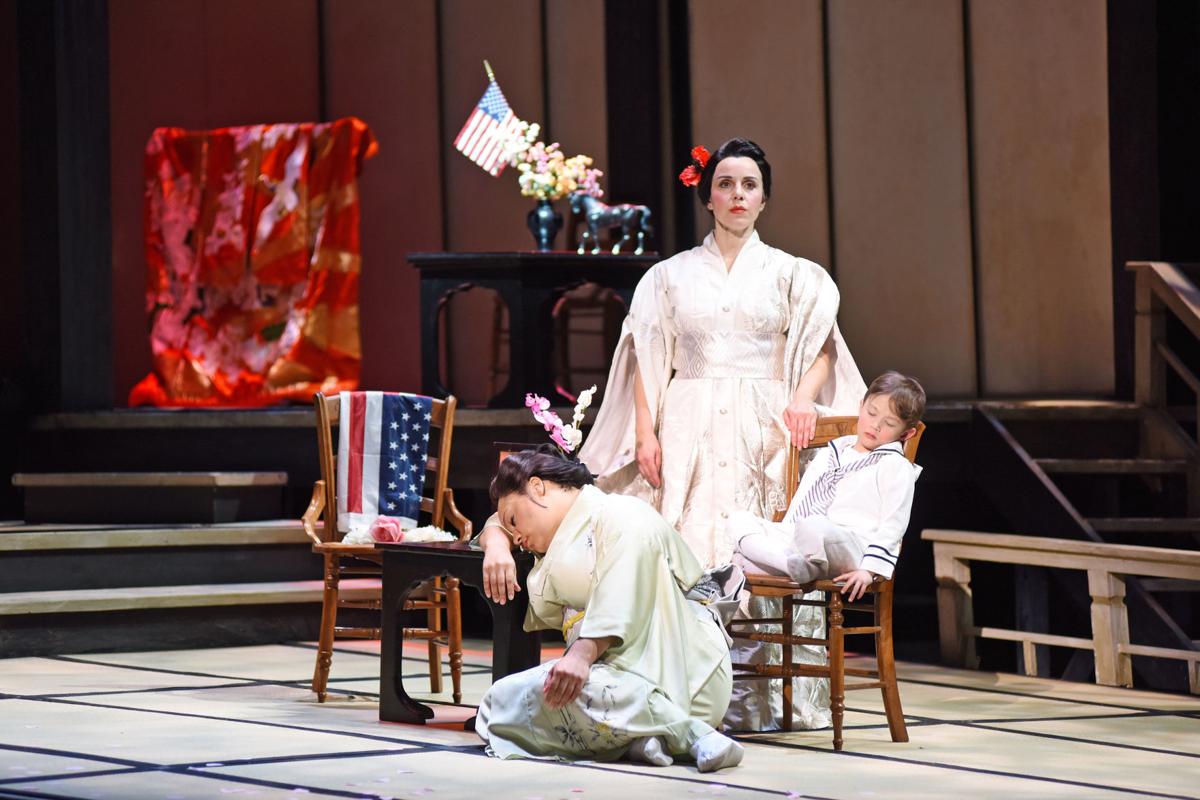 Sandra Lopez as Cio Cio-san fixates on being abandoned by her American husband while her son and maid (mezzo Deborah Nansteel) sleep. 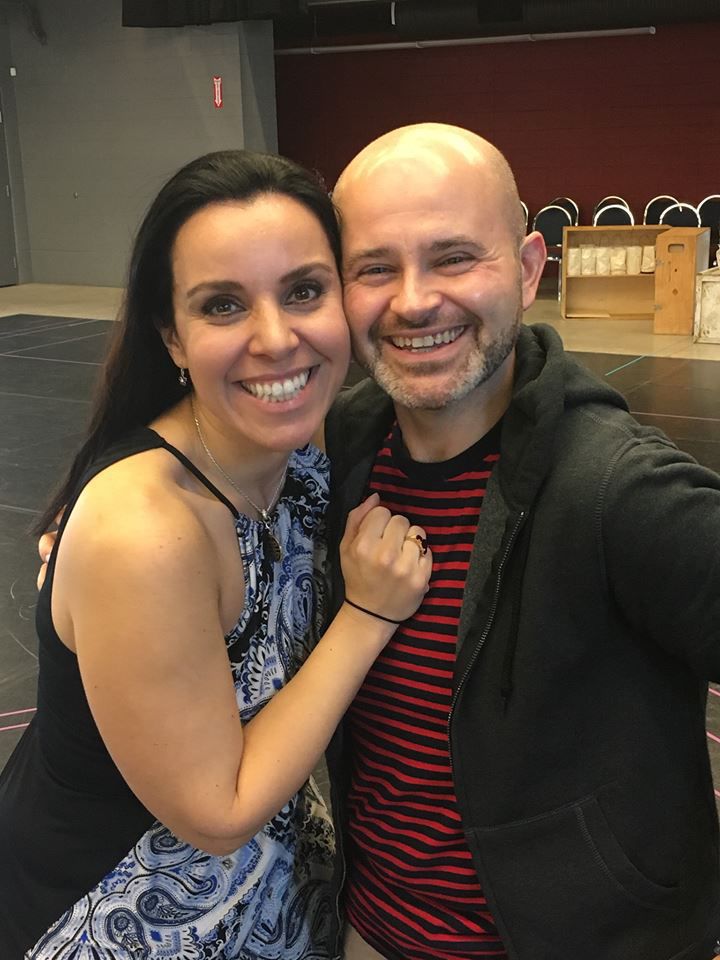 performed her first ever “Madama Butterfly” with tenor Jason Ferrante years ago. The pair, who initially met as high-schoolers auditioning for music schools, are reunited in Puccini’s piece with Arizona Opera.

Bring on the boos. Let me have it, he encouraged the crowd with a simple flick of the wrist.

And the audience nearly filling the hall booed — playfully, of course.

They weren't booing for the former San Francisco Opera Adler Fellow, a rising voice on the tenor scene who had just made his role debut as Pinkerton in Arizona Opera's production of Puccini's "Madama Butterfly."

They were booing his character, the wretched excuse of an American sailor in crisp white dress uniform who deceives a young Japanese geisha into marrying him so that he could have his way with her.

And under the vision of director Matthew Ozawa, Pinkerton was especially creepy, with undertones of pedophilia — when told by Sharpless (performed with conflicted emotion and a rich, dramatic baritone by Levi Hernandez) that Butterfly was only 15, possibly too young for the American sailor, he quipped that what some saw as young he viewed as "wedding candy." Eeewww.

Montenegro was pretty amazing in the role, conniving and cold-hearted when wooing Butterfly (soprano Sandra Lopez) during their long love duet in the first act, then suspiciously remorseful and, well, chicken-you-know-what-ed when it came time to end the farce and take home his Japanese son to be raised by his new American wife.

"Madama Butterfly" is part of the Tucson Desert Song Festival, the 19-day event spread over several organizations from Tucson Symphony Orchestra to the opera company. Montenegro and Lopez were among the nearly two dozen festival artists.

Lopez has sung the role of Butterfly so many times during her young career that it has become a signature. We weren't surprised that she could sing the dickens out of the role, which is the predominant voice throughout the two-plus-hour piece. But she brought a crisp balance of pain, confusion and anger to her interpretation. The higher her soprano soared, the more desperate we saw her character become. Lopez started out gentle voiced with tones of optimistic warmth. But as the story unfolded and Butterfly realized that she was being had, Lopez soared to the highest point of her register and sang faster, accentuating anxiety and disappointment one minute, then retreating into soulful and painful resignation.

Ozawa gave us an intimate view of a young naive girl folding under the weight of despair and disappointment. He let us see Butterfly's plight through a universal lens; it wasn't a Japanese story, or American story. It was a human story.

• The Arizona Opera Orchestra under the baton of conductor Craig Kier sounded terrific from the opening orchestral prelude to the crushing suicide scene in the finale. At times, though, they played too loudly, nearly drowning out the voices on stage.

• Where the heck did mezzo-soprano Deborah Nansteel come from and please, bring her back! She owned the role of Butterfly's maid Suzuki with a commanding, muscular voice that had flashes of vulnerability that gave way to a not-so-subtle snarky side. When the audience was handing out standing ovations and applause, the loudest went to Nansteel, and she deserved every brava and hand-stinging clap the audience gave.

Saturday night's performance was a little late getting to the stage. Thank hockey.

A soldout Tucson Arena crowd greeted the Tucson Roadrunners in its matchup with the San Diego Gulls, which meant parking was at a minimum. And that left folks heading to the opera — which was supposed to start at 7:30 p.m. — circling the nearby parking garages and lots for a rare spot here and there. As for the Roadrunners: San Diego won 3-0, sweeping the three-game series with the Roadrunners and extending the hometown team's losing streak to five.

Everything comes into play at ensemble's magnificent Mendelssohn concert.

Sandra Lopez as Cio Cio-san fixates on being abandoned by her American husband while her son and maid (mezzo Deborah Nansteel) sleep.

performed her first ever “Madama Butterfly” with tenor Jason Ferrante years ago. The pair, who initially met as high-schoolers auditioning for music schools, are reunited in Puccini’s piece with Arizona Opera.