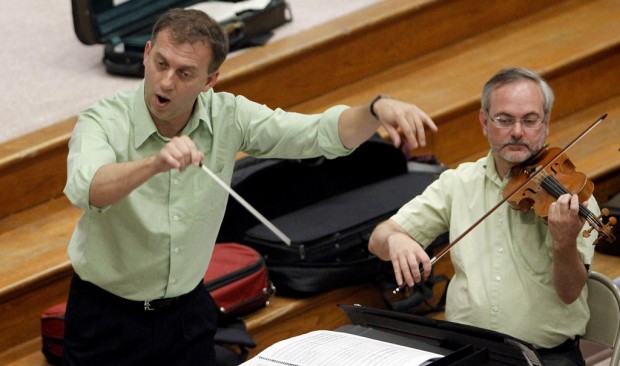 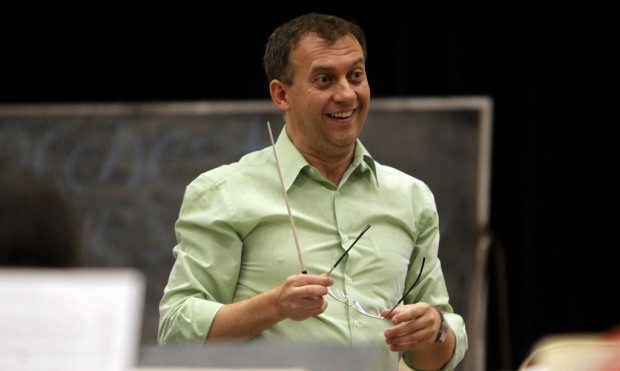 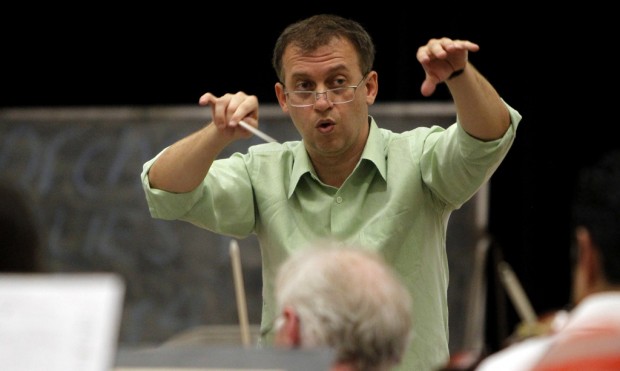 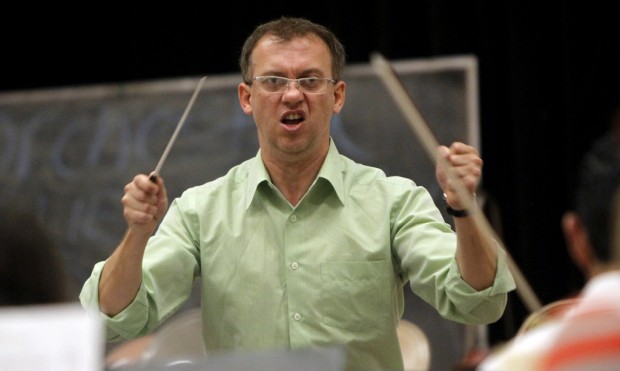 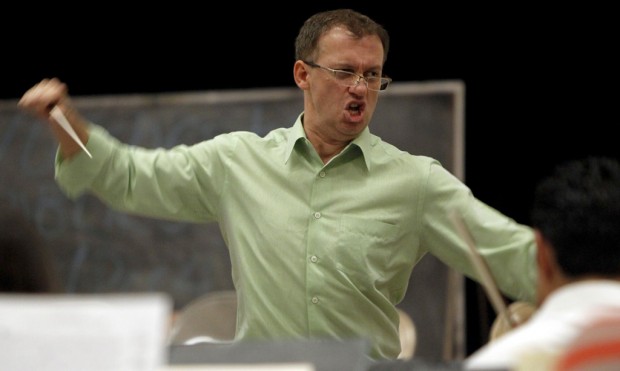 This summer alone he will hopscotch the globe to vocal coaching/teaching and guest conducting gigs in his native Brazil, along with Oaxaca, Mexico and Beijing, China.

In the fall, the Southern Arizona Symphony Orchestra conductor will add even more miles: He's back to Mexico and then will return to China with SASO for the volunteer ensemble's second state-sponsored tour.

With mostly word-of-mouth referrals, Lerner has quietly built an international conducting and teaching career that has taken him to 35 countries, including his April debut in Turkey.

Next year, if everything goes as planned, he will add country 36: Taiwan.

To know how he went from a community orchestra conductor in Tucson to an in-demand vocal coach and having his name in neon lights above China's finest concert halls, you have to go back to Lerner's hardscrabble childhood.

A deep desire to rise above

Sitting in Bentley's House of Coffee & Tea on a May Wednesday morning, Lerner tapped on his laptop, scrolling through his growing résumé. He ticked off his accomplishments - from the international guest conducting gigs to his work as a vocal clinician in Mexico and Brazil.

"There's a sense to me that every place I work, people want to play for me," he says in a lyrical Brazilian accent that has softened some after 15 years in the United States.

The statement might sound like bragging if you've never seen SASO in action with him at the podium.

"He has done amazing things in building up excitement in the community and among orchestra members," longtime SASO violinist Tim Secomb says.

"I think it's a very strong orchestra and a lot of the motivation comes from Linus" (pronounced Lee-Nus), adds bass player Barbara Chinworth, who founded the orchestra with her husband 33 years ago.

Lerner will tell you that he has studied and practiced muscle memory - repeating specific motor tasks until your body instinctively reacts, such as when you get on a bicycle and automatically start pedaling.

But his drive goes deeper than that.

From the time he was a young boy in Brazil, growing up in an impoverished family, he was determined his life would matter.

It was a survival tool, he explains in the coffee shop, sipping iced tea. He says he was raised in a volatile household with an alcoholic father who told him more than once that Lerner was a mistake.

Lerner never really believed him. Instead of dwelling on the negative, he became adept at focusing on the good.

No time for play

Lerner started working when he was 7, helping his father make shoes in his small shop.

"I would got to school and come home for lunch and make shoes and spend the nights making shoes," he says. "I had no time to do my schoolwork so I would memorize it. And I became such a good student because I would memorize everything."

There was not a time he didn't work as a child, including jobs at the local Coca-Cola factory. Life was school, work and church.

When Lerner took his first communion, he had an epiphany.

"I was chosen from 90-some boys and girls making their first communion to do a solo," he says, recalling how he stood in front of the packed church and sang. "That moment I realized music is what I want to do."

But his father would have none of that. He pushed his youngest child - Lerner has an older sister and brother - into a prestigious Brazilian banking program for disadvantage teens. At 13, Lerner landed a spot in the program and worked four hours a day for a decent wage.

His father envisioned Lerner sticking with the program through high school and eventually getting hired on permanently for a high-paid job. Lerner, though, was just biding his time, sneaking in guitar lessons paid for by his older brother without his father's knowledge.

Within two years, Lerner had become so good at guitar he was offered a teaching job with a local music school. He quit the bank.

"My father was so mad he kicked me out," Lerner recalls. "But I was actually, at age 16 and 17, making more money playing music than I was at the bank."

Carving a career out of nothing

On his own, Lerner taught at the guitar school and started singing in restaurants. He spent money to attend workshops and seminars on Brazilian popular music. At one of those workshop in the summer of his senior year in high school, he met Herminio Bello de Carvalho, a poet and one of Brazil's leading music producers. De Carvalho was speaking on the future of bossa nova before a group of older musicians and educators - and the then-teenage Lerner.

When the renowned producer opened the session up to audience questions, Lerner boldly asked why there were no other young people at the seminar if its purpose was to talk about the future. De Carvalho was intrigued. He pulled Lerner aside later and the two struck up a friendship that paid dividends: De Carvalho introduced Lerner to the who's who of Brazilian popular music.

"Here I am this poor kid going to the center of the bossa nova world, and I'm going into a world that is absolutely amazing to me," Lerner recalls.

Lerner returned to school from that summer more determined than ever to make music his life - but not the popular music de Carvalho knew.

"I had decided I wanted to do classical music," he says. So he focused his final high school year on choral conducting, graduating with a music diploma.

It took him a few years to find his way to college; he was too busy conducting several nonprofessional choirs, singing with and conducting a vocal quartet and performing with his guitar orchestra, which played in restaurants and clubs throughout the region and was featured on TV.

By the time he earned his bachelor's degree in choral conducting from the Universidade Federal do Rio Grande do Sul, Lerner had performed in a few operas and studied singing with top-ranked teachers including Brazil's leading vocalist Neyde Thomas, who was a regular with the Deutsche Oper and the New York Metropolitan Opera and had shared the stage with Placido Domingo and Luciano Pavarotti.

Lerner arrived in the United States through an invitation to study in Ohio when he was 27. He earned his master's degree in orchestral conducting from Florida State University and made his way to Tucson at the invitation of Thomas Cockrell. The University of Arizona School of Music's conducting director promised Lerner he could combine his musical loves in the UA doctoral program.

"I love opera and I love singing and I love conducting," Lerner says. "The University of Arizona had a program where I could do all three."

Early into his UA tenure, Lerner landed a job with Tucson's Reveille Men's Chorus, a nonprofessional troupe that specializes in Broadway show tunes and fanciful pop choral literature. Under his leadership, Lerner grew the group artistically, expanding its repertoire and its audience and joining forces with other arts organizations.

He has had a similar approach to SASO since taking over as music director in the 2008-09 season. In four years, he has invited other arts organizations to share SASO's stage, including the acclaimed soldout performances of "Carmina Burana" in 2009 that involved three local choruses and 240 musicians in all; beefed up the group's repertoire adding, in Secomb's view, "programming that is as difficult as professional orchestras do"; and brought in a host of guest soloists including guest conductor Tao Fan, a leading music director in China.

Perhaps his biggest coup was taking the group to China in early 2010 for a whirlwind 10-day tour. The SASO will return in late December for its second tour, this one under the auspices of the Beijing Concert Hall, the country's leading concert organizer, Secomb says.

"That's a reflection of how well we did the last time around and the connections we have in China," he says.

"Linus wants to be challenged himself and he wants us to be challenged," Secomb adds. "I think most of us are very enthusiastic about what he brings. We are wondering can we handle it, so it's a little bit scary. But I think most people enjoy that challenge. And I think everyone appreciates it."

"I love what I do," Lerner says that day at the Tucson coffee shop. "The biggest reward as a musician is doing something so well that they invite you back."

How to spend those miles

Since his second season with SASO, Lerner has commuted from Houston, where he took on the job as music director of the Bayou Performing Arts' men's and women's choruses and lives full-time, to Tucson, where he still owns a home. He is earning those frequent flier miles every time he hops on a plane in Houston bound for Tucson, which is several times a month from September through May.

In May, he cashed in a big chunk of his saved miles to bring his brother and sister-in-law, and his parents to the United States to celebrate the parents' 50th wedding anniversary.

He spent a few extra miles to fly his mom and dad first class.

Tucson orchestra on Sunday played first of two concerts at festival in Brazil.