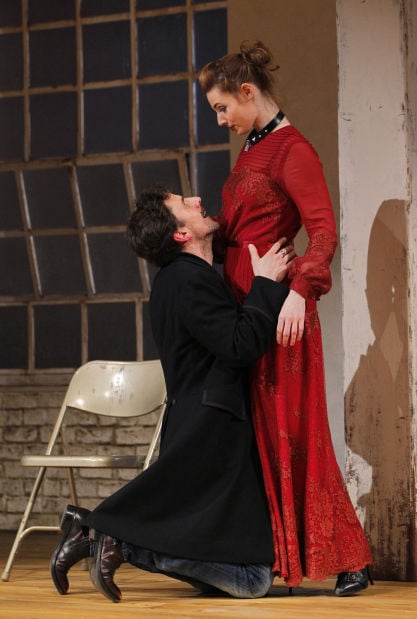 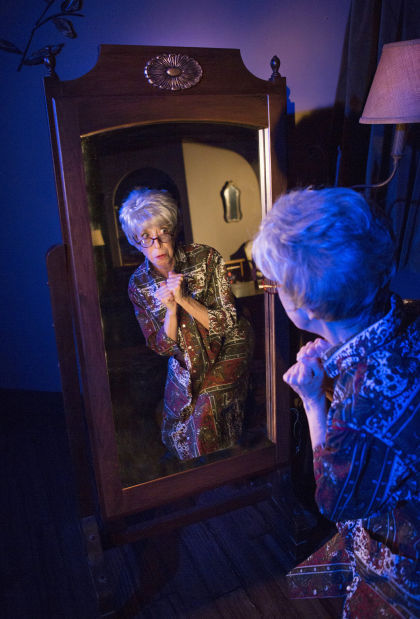 Olive (Susan Claassen), original star of the “Gimme The Sausage” commercials, sees an image in the mirror, setting off a chain of madcap events in “Olive and the Bitter Herbs.” 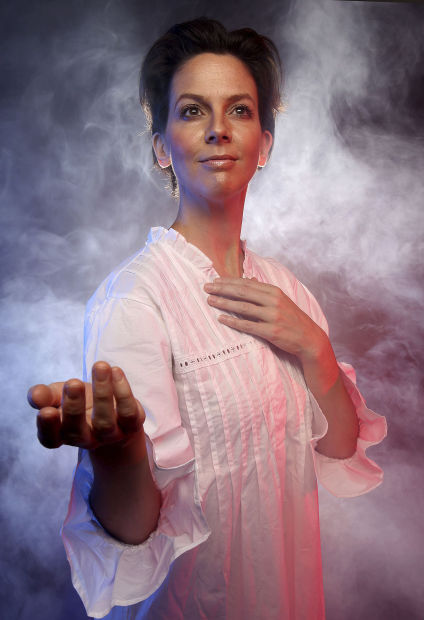 Amy Erbe is a cast member of Les Miserables who plays Fantine in the Arizona Onstage Productions performance. The play is being performed August 9-10 and 16-17 at the Berger Center for Performing Arts, 1200 W Speedway Blvd. The photo was taken on Sunday, July 27, 2014, in Tucson, Ariz. Photo by A.E. Araiza/ Arizona Daily Star 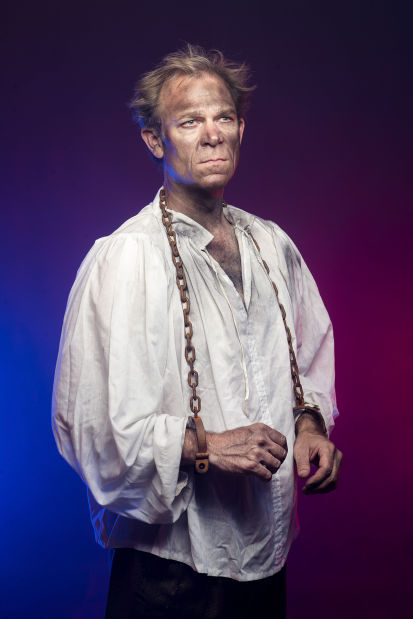 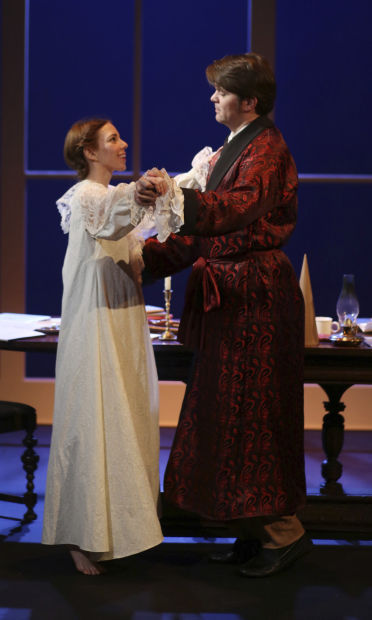 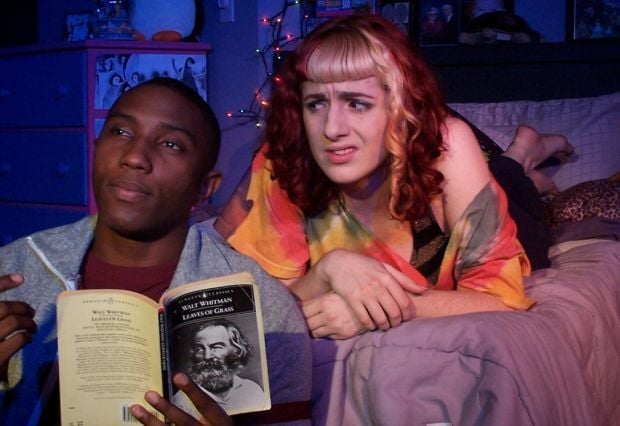 The characters that Nick Trice and Lucille Petty portray in “I and You” should be insufferable. Instead they are haunting. 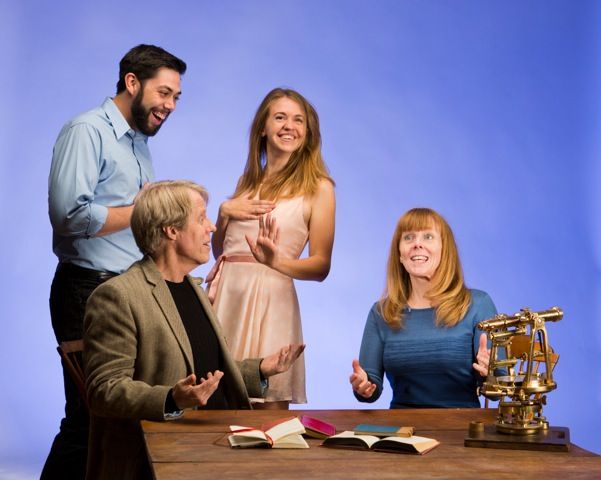 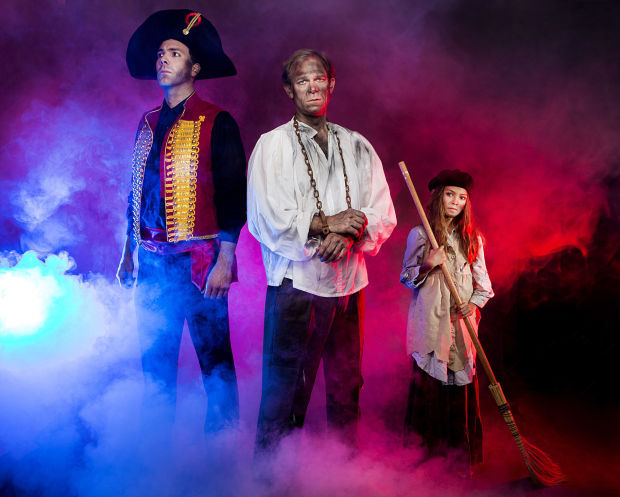 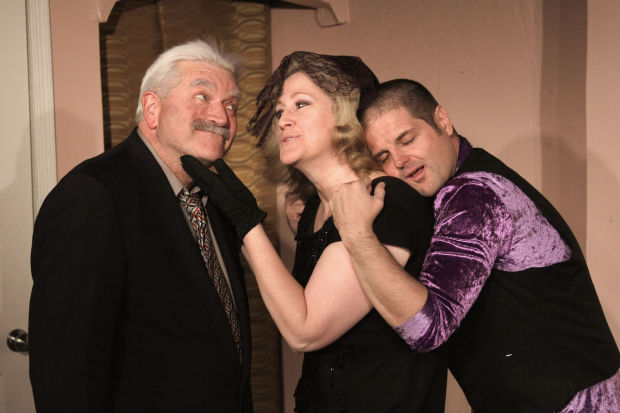 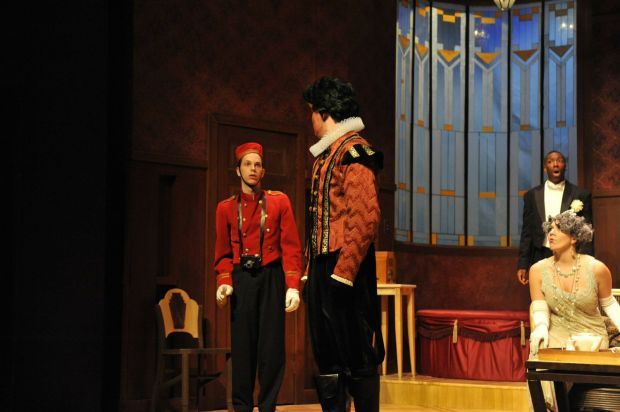 Paul Michael Thomson's portrayal of the bell hop in Arizona Repertory Theatre's production of "Lend Me A Tenor" wins him a Mac for Best Actor in a Comedy. -- Credit: Ed Flores

Also at ATC, Charles Janasz in “Vanya and Sonia and Masha and Spike” gave us a character who was a bit sad and a lot funny.

Stephen Frankenfield was completely over the top in Live Theatre Workshop’s farce, “The Game’s Afoot,” and we completely loved him for it.

Chris Moseley, Matthew C. Copley and Patrick Burke in Live Theatre Workshop’s “The Complete Works of William Shakespeare (Abridged) [Revised}” played off each other beautifully and kept us laughing throughout the one-joke play.

Evan Werner was deliciously awkward as Jules in Winding Road Theatre Ensemble’s production of “Doom,” an alternative theory on the end of the world.

The Mac goes to Paul Michael Thomson as the star-struck bellhop in Arizona Repertory Theatre’s “Lend Me a Tenor.” He conveyed volumes with the shrug of a shoulder and the twitch of a brow.

Dani Dryer‘s performance as Jo in Winding Road Theatre Ensemble’s “Boom” was as funny as it was nuanced.

Noga Panai barely spoke English in Invisible Theatre’s “Handle With Care.” Still, she conveyed volumes with her face and body.

Suzanne Warmanen was a whining, winning Sonia in ATC’s production of “Vanya and Sonia and Masha and Spike.”

In ATC’s “Venus in Fur,” Gillian Williams switched characters in a flash and was convincing both as the actress who plays the ditz to hide her smarts and the cultured, whip-cracking Victorian lady.

Rhonda Hallquist‘s comedic sense was pristine in her portrayal of Fay, a murderess, seductress, and thief in Live Theatre’s “Loot.”

The Mac goes to Susan Claassen for her performance as Olive in Invisible Theatre’s “Olive and the Bitter Herbs,” Claassen slipped into the role of the outrageous character with finesse and expert timing.

Laurey — the romantic lead in “Oklahoma” — can be a not-so-interesting character with a beautiful voice. But Silvia Vannoy in Arizona Repertory Theatre’s production loaded her Laurey with personality. And she has a gorgeous voice.

Jamie Grossman as the spunky Georgie in Arizona Rep’s “The Full Monty,” was a sassy hoot.

The Mac goes to Amy Erbe for her performance as Fantine in Arizona Onstage’s “Les Miz.” She made the depth of the character’s despair palpable and the memory of her “I Dreamed A Dream” is still fresh.

Ethan Kirschbaum managed to mix machisimo with a tenderness, giving the out-of-work dad in Arizona Repertory Theatre’s “The Full Monty” heart and heft.

Charlie Hall in the role of the chunky Dave in “The Full Monty” sang beautifully while he made us laugh and ache for this character with no self-esteem.

Michael Calvoni made his mark in comedic roles at the University of Arizona, but in “Oklahoma,” he showed he’s got what it takes to be a romantic lead, too.

Jeremy Vega and Tyler Wright have powerful voices and they were on impressive display in Arizona Onstage Productions’ “The Story of My Life.”

The Mac goes to Kit Runge in the role of Valjean in Arizona Onstage Productions’ “Les Miz.” Runge revealed a range and nuance we hadn’t seen before. His Valjean was angry, conflicted, vulnerable, tender and harsh. And riveting.

Christopher Johnson‘s portrayal of Macho in Latina Dance Theatre Project’s “Jaguar” was mesmerizing as he stalked the stage and embodied a young, complex and questioning jaguar.

Matt Bowdren played the husband, and Ryan Parker Knox, the lover in the Rogue’s compelling production of “Betrayal.” Both gave full, complicated and tense life to their characters.

Nick Trice embraced his inner geek in his moving performance as the gawky teen boy in Invisible Theatre’s “I and You.”

The Mac goes to Ryan Parker Knox, who shimmied into the skin of the tutor Septimus in the Rogue’s “Arcadia” and became the character with intellectual sharpness, a roving eye, and a razor-sharp wit.

Carley Elizabeth Preston‘s portrayal of the blind woman who regains her sight after surgery in Live Theatre’s “Molly Sweeney” had a luminousness and deep knowing.

Lori Hunt silkily slipped from one compelling character to another in Live Theatre’s “9 Parts of Desire.”

Marissa Garcia‘s Emma, in Rogue’s “Betrayal” gave us a deep sense of this woman’s struggles to keep her emotions — and deceptions — hidden.

Silda, the trying-to-recover alcoholic in ATC’s “Other Desert Cities,” felt real and painful and funny in Robin Moseley‘s hands.

The Mac goes to Lucille Petty, who possessed Caroline, a teen with a life-threatening illness, in Invisible Theatre’s “I and You.” She was steeped in the natural swagger and shyness of a teenage girl and gave us a character that is hard to forget.

Winding Road Theater Ensemble’s “Boom” was a dark, wild story that took the audience on a crazy ride that provoked laughter and a bit of thought.

Live Theatre Workshop’s “Loot” could have been dated and tedious, but this production made it seem fresh and as funny and dark as always.

Arizona Onstage Production’s “Love, Loss, and What I Wore” did justice to Nora and Delia Ephron’s very funny script.

ATC’s “Vanya and Sonia and Masha and Spike” was whacked out (of course; it’s by Christopher Durang) and very, very funny.

Invisible Theatre’s “Handle With Care” was a comedy wrapped with heart.

The Rogue impressed with its eloquent, tense and heart-wrenching production of Harold Pinter’s “Betrayal.”

Invisible Theatre’s “A Kid Like Jake” packed a punch with its story of a married couple struggling to bring up a child in the best way possible.

“I and You” at Invisible Theatre made us laugh as we watched a story about teens, poetry and death.

The Mac goes to The Rogue Theatre for its electrifying production of Tom Stoppard’s complex “Arcadia.” This is not an easy play to stage, but The Rogue made it look easy while it clarified, provoked and entertained.

Arizona Rep also staged a production of the classic musical “Oklahoma” that reminded us of what was so golden about the Golden Age of Musicals.

Arizona Onstage’s “The Story of My Life” was beautifully staged and performed.

The Mac goes to Arizona Onstage Productions not only for the guts to take on the massive “Les Misérables,” but for doing it so well. The all-Tucson cast proved that when talent and heart are in place, thrilling things can happen.

Susan Claassen saw to it that Invisible Theatre’s “Handle With Care” was as poignant as it was funny.

Annette Hillman snags the Mac for her direction of Live Theatre’s “Loot.” She wrung every bit of humor out of the script without ever sacrificing playwright Joe Orton’s pointed jabs at all aspects of society.

Cynthia Meier‘s direction of the Rogue’s production of the talky “Betrayal” was full of angst and tension.

Kevin Black‘s direction of Invisible Theatre’s “A Kid Like Jake” was layered. That he also starred in the play just makes the spot-on directing job all the more impressive.

The Mac goes to Cynthia Meier for her direction of the Rogue’s “Arcadia.” The play has the potential to be dry and convoluted. Meier gave it coherence, movement and made it the riveting production playwright Tom Stoppard surely intended.

Danny Gurwin‘s direction of the Arizona Repertory Theatre’s “The Full Monty” and “Oklahoma” resulted in some remarkable performances from his student actors and both shows had audiences cheering.

Kevin Johnson somehow took a cast of more than 40, an orchestra, and a universally loved play and made it fresh and madly entertaining. He wins the Mac for his direction of Arizona Onstage Production’s “Les Misérables.”

Olive (Susan Claassen), original star of the “Gimme The Sausage” commercials, sees an image in the mirror, setting off a chain of madcap events in “Olive and the Bitter Herbs.”

Amy Erbe is a cast member of Les Miserables who plays Fantine in the Arizona Onstage Productions performance. The play is being performed August 9-10 and 16-17 at the Berger Center for Performing Arts, 1200 W Speedway Blvd. The photo was taken on Sunday, July 27, 2014, in Tucson, Ariz. Photo by A.E. Araiza/ Arizona Daily Star

The characters that Nick Trice and Lucille Petty portray in “I and You” should be insufferable. Instead they are haunting.

Paul Michael Thomson's portrayal of the bell hop in Arizona Repertory Theatre's production of "Lend Me A Tenor" wins him a Mac for Best Actor in a Comedy. -- Credit: Ed Flores