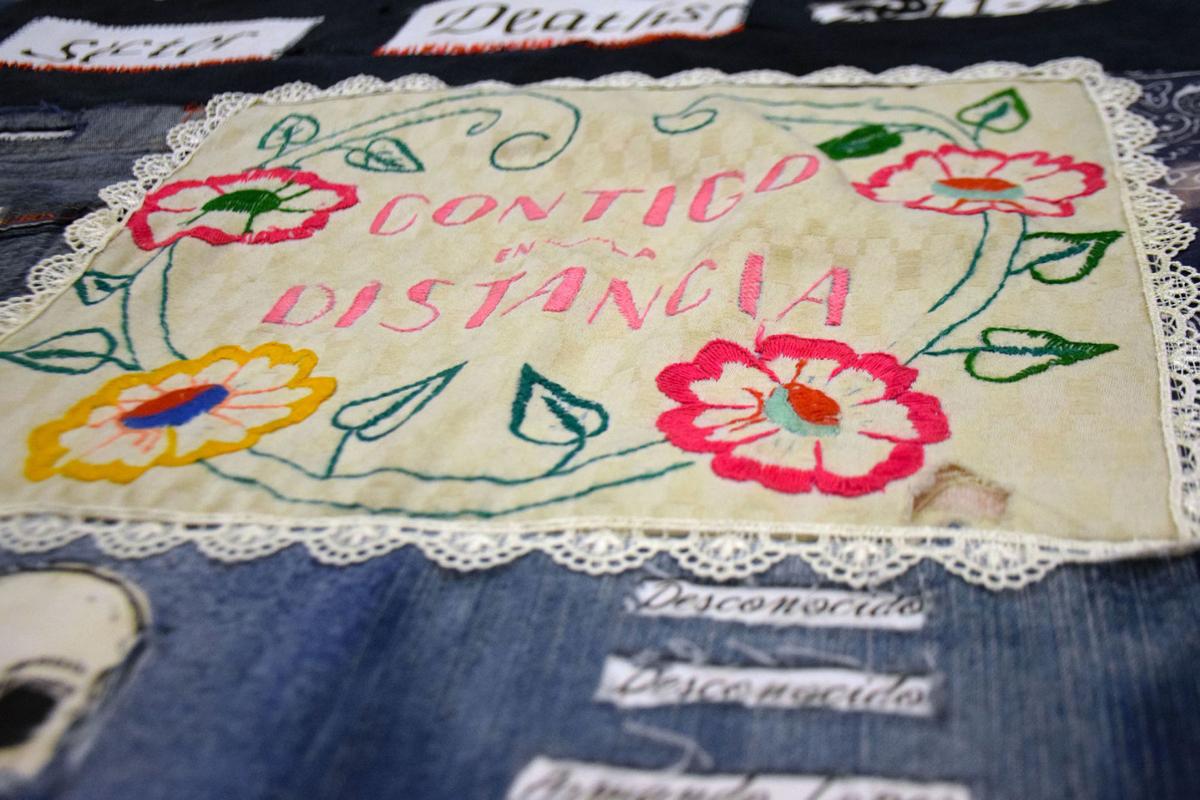 A bordado, or embroidery, that reads “with you from a distance” is stitched onto a migrant quilt, as are names of people who died in the desert. 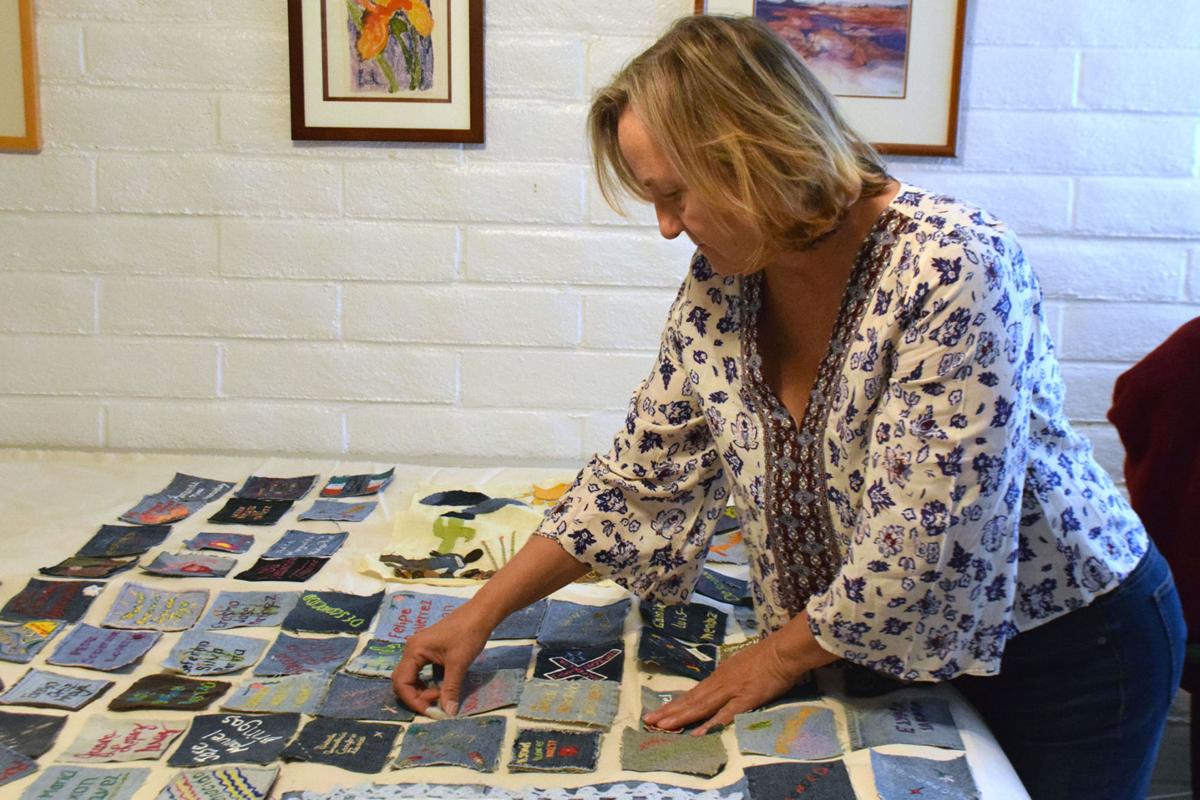 Founder of the Migrant Quilt Project, Jody Ipsen, lays out pieces for a quilt. Fabric for quilts comes from clothes collected from “lay-up sites.” 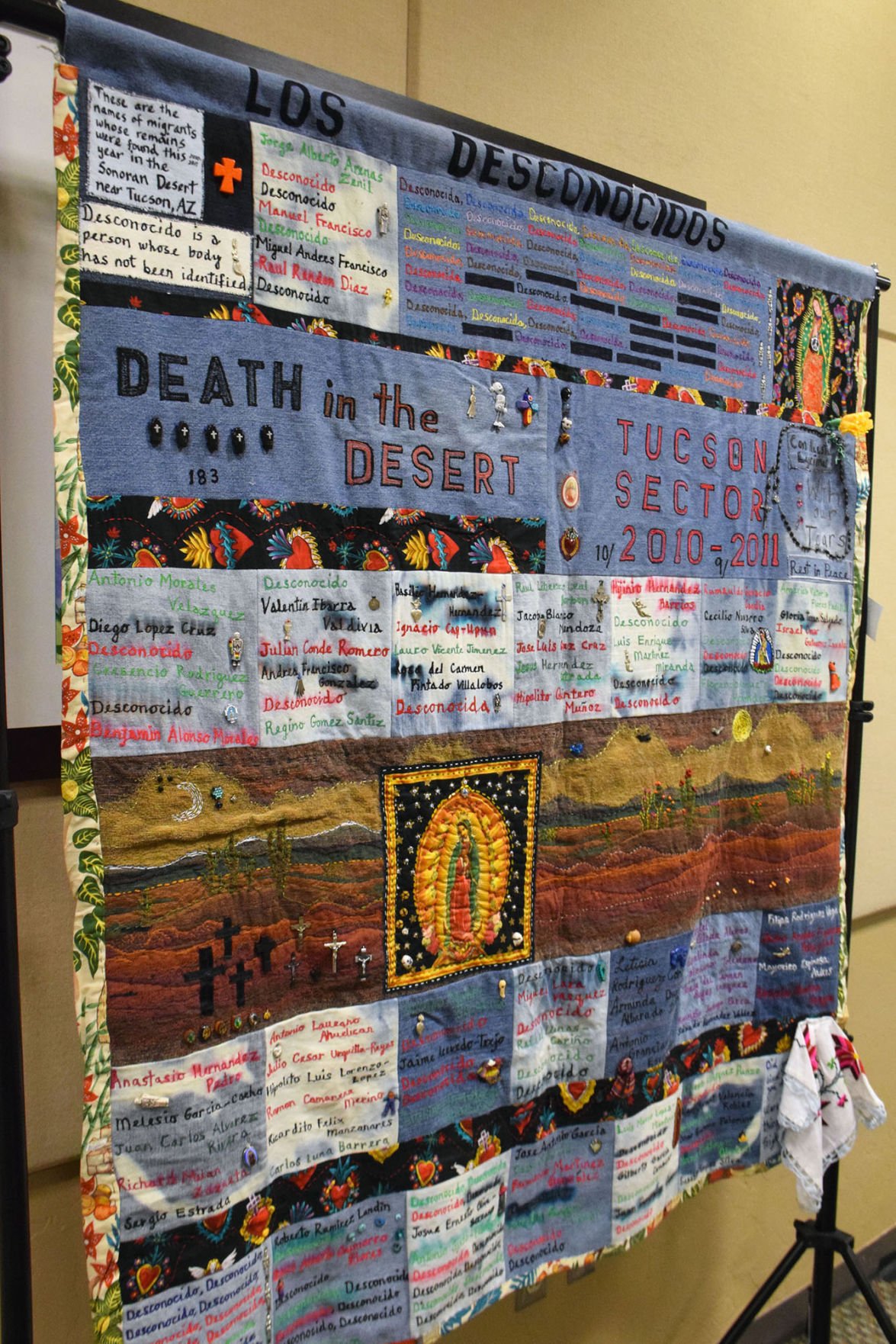 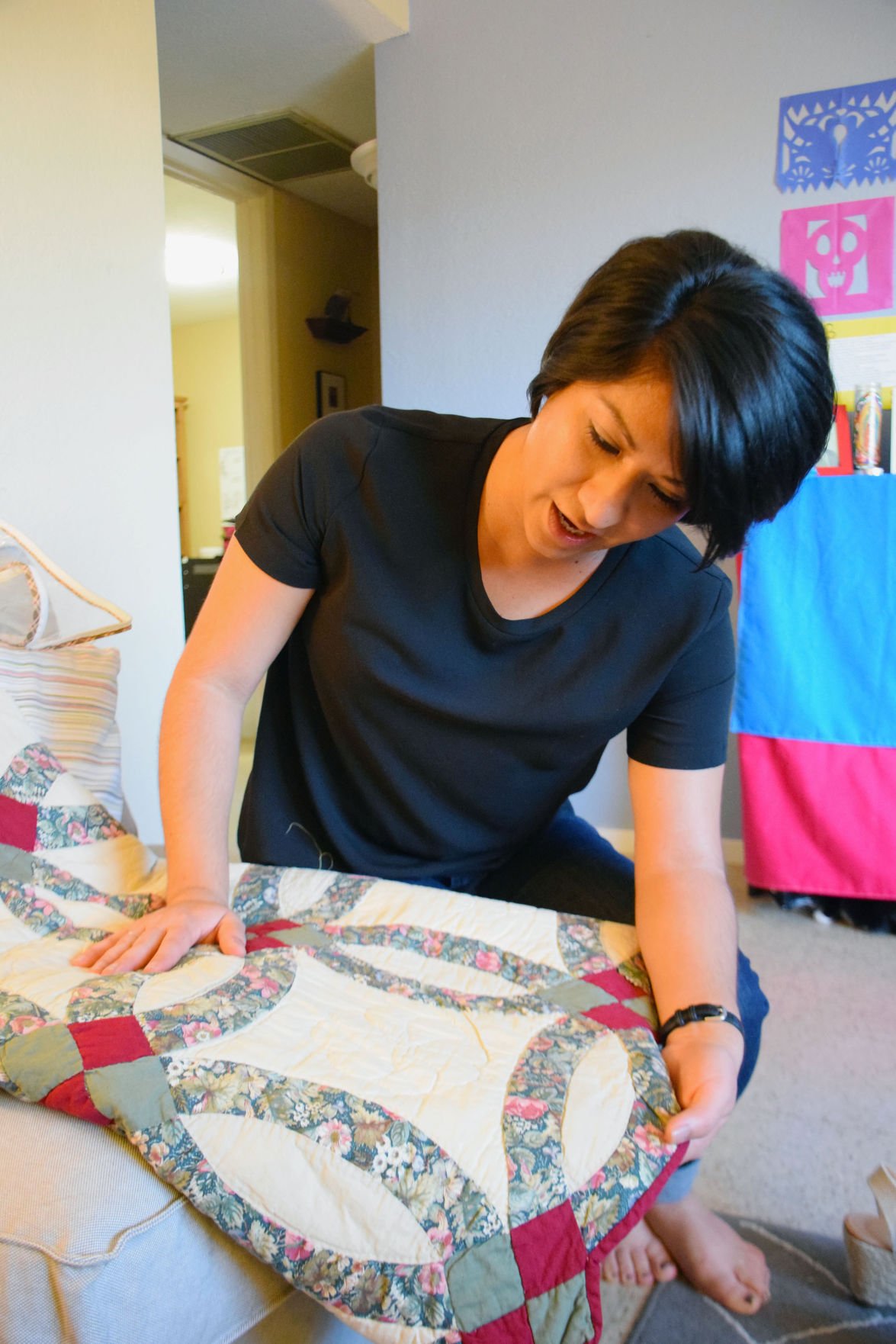 Sonia Arellano looks at a quilt her grandmother made. 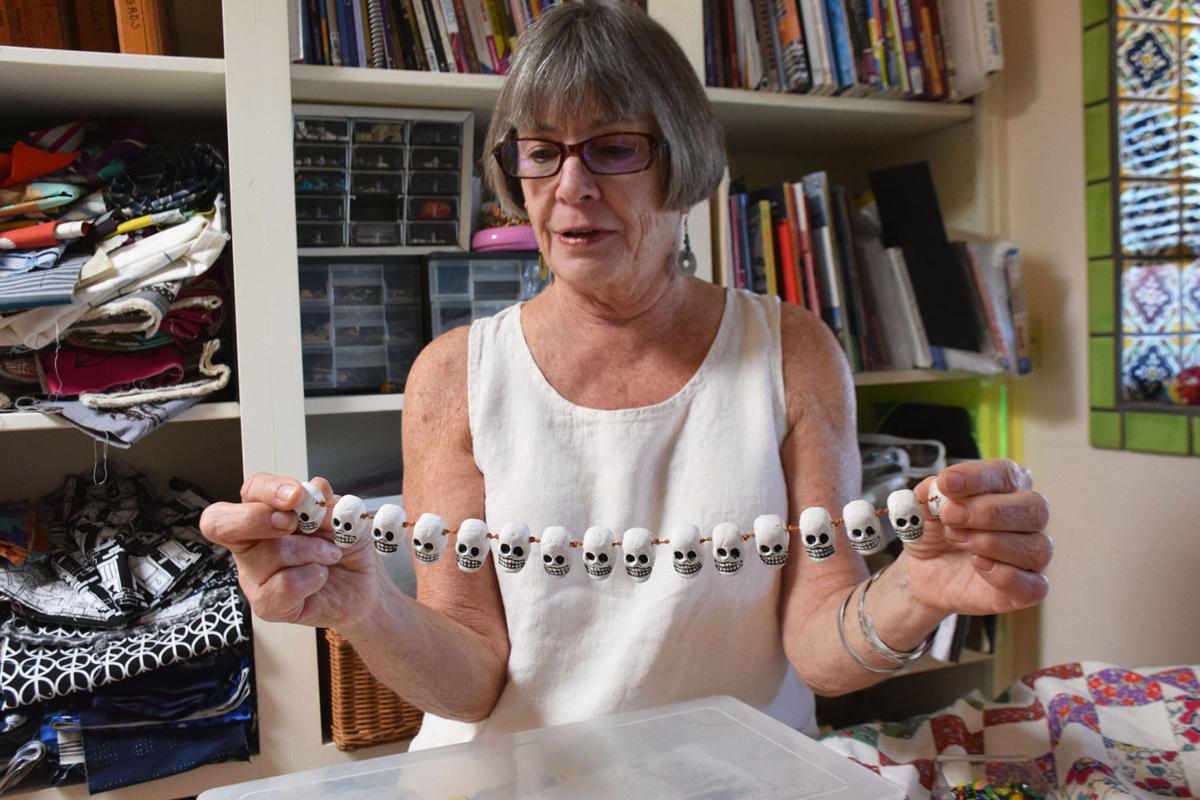 Cornelia Bayley holds up a string of skull beads in her quilting room. 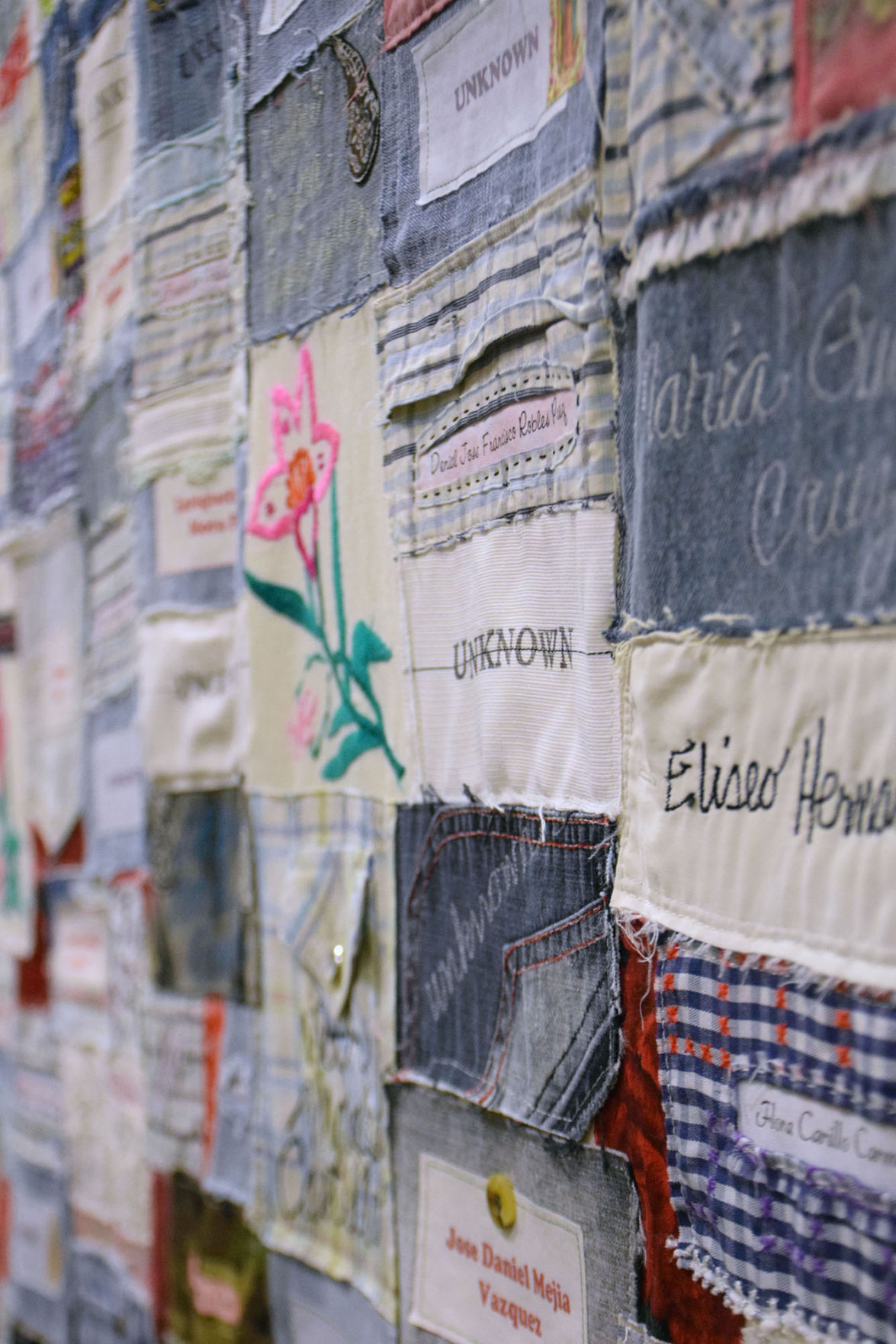 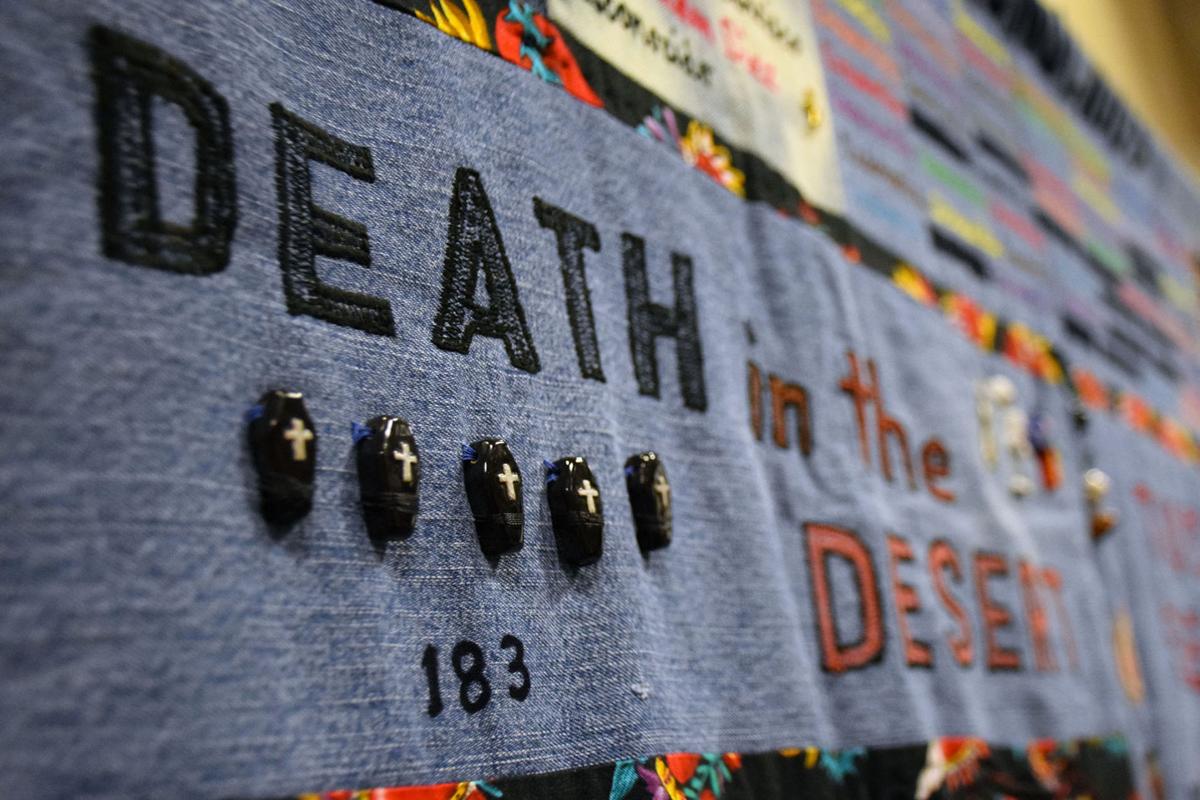 Each quilt is unique.

Some are bejeweled with tiny black coffins, images of the Virgin of Guadalupe and colorful crosses. One has rows of skulls stitched into the back pockets of faded blue jeans. Another is a patchwork of embroidered flowers and deconstructed shirt collars.

What they have in common are the names of people who died trying to cross the desert into Arizona. Thousands of names are stitched and penned onto denim patches and pockets, strips of fabric and clothing labels.

At once beautiful and staggering, the quilts are part of Los Desconocidos and The Migrant Quilt Project, founded in 2007 by Tucsonan Jody Ipsen to honor the thousands of migrants who have died in the Arizona desert since 2000 and to bring awareness to the policies bound to their deaths.

Ipsen has lived in Tucson since she was 6 years old, so she was familiar with tales of migration and border security. She knew that migrants who don’t cross through legal ports of entry often trek through the Arizona desert on their way to family members or jobs across the country.

She knew, but she didn’t really understand. Until 2006.

Hiking in the Huachuca Mountains with a friend, she happened upon a “lay-up site,” where smugglers bring migrants to eat, rest and maybe change their clothes before continuing on their journey. The small clearing was littered with clothes, shoes and backpacks — but also with baby diapers and children’s clothes.

“It was so overwhelming to see those baby items in the desert,” she says. “I was just so completely appalled, but sad. Deeply sad. Because these people were crossing for a better life, but they were also bringing babies and children.”

The sight sparked her curiousity, and she decided to make the grueling journey herself. She found a translator, bought a plane ticket to El Salvador and backpacked north along the route many Central American migrants travel.

On the way, she stopped in tiny, remote villages of El Salvador and Guatemala to talk with families of deceased migrants whose names she had found in Tucson’s newspapers.

She heard of farmers who couldn’t compete with subsidized imports from the United States that hit local markets mid-1990s, when the North American Free Trade Agreement went in to affect. She spoke to the families of people who couldn’t find jobs and felt they had no choice but to leave their homes, even though they didn’t want to, she says.

With Operation Hold-the-Line in 1993 in El Paso, Texas, and Operation Gatekeeper in San Diego, California, as well as Operation Safeguard in 1994 in the U.S. Border Patrol’s Tucson Sector, new and higher border fences went up, the number of Border Patrol agents increased and migrants began crossing in remote deserts.

Deaths in the Tucson Sector surged from fewer than a dozen each year during the 1990s to nearly 300 in fiscal year 2004-2005 alone, records from the Pima County Office of the Medical Examiner show. Since 2000, more than 3,000 migrants have died trying to cross in this sector and upwards of 6,000 across the entire U.S. southern border.

Distressed by what she found, Ipsen started volunteering with the nonprofit group Humane Borders, filling water stations in the desert and collecting belongings left behind at migrant camps: T-shirts, embroideries, bandanas and blue jeans. Lots and lots of blue jeans.

She saw the discarded clothing as a tool to talk about migration, so she used the fabric to make bags and purses. But it didn’t seem like enough.

Thinking of how the NAMES Project AIDS Memorial Quilt had brought awareness to the AIDS epidemic in the 1980s, she decided to turn the clothing into quilts with the names of the migrants who died trying to cross the Border Patrol’s Tucson Sector, 262 miles from the eastern edge of Yuma County to the New Mexico state line.

She recruited volunteer artists and quilters to create bold works that would both honor the migrants and draw attention to the policies that pushed them into the desert where they died.

When Cornelia Bayley quilts, she doesn’t do it halfway. Attaching a dazzling assortment of beads, buttons, charms and embroidery, her eye-catching pieces are as distinct as they are beautiful.

Bayley has been quilting for as long as she can remember, at least since the 1970s when her children were born. And for almost as long, she has been making quilts with an emotional significance — personal or political.

She has made anti-war quilts, one about the death of Princess Diana, quilts for people protected in the Sanctuary Movement and small ones that she donates to migrant mothers. But the pair of quilts she made Los Desconocidos may be her most important, she says.

Handed a list of names and a stack of clothes collected from lay-up sites — never clothing from recovered bodies — she and the other quilters are given carte blanche to create, and for many the process of designing and constructing becomes intimate and emotional, a grieving process.

“I don’t think when I signed up for it I had any idea how it would grab me,” Bayley says. “When I made those migrant quilts it was touching me down to the bone. I was obsessed with it for months.”

As she held the migrant clothing she imagined the hopes of dreams of the people who had worn them, where they came from, what their lives and deaths had been like.

Stitched into the waistband of one pair of blue jeans she found $300 someone had hidden for their in new life in the United States.

“That was their special money. And it was sewn in so it wouldn’t get stolen while they were traveling,” she says. “I thought that was heartbreaking.”

Quilts have deep ties to activism and consciousness-raising. From abolitionists to the temperance movement, civil rights to the AIDS Memorial Quilt, textiles have long served as a way to communicate political and social ideas, especially for women.

“That was a way that women had a political voice when they had no vote,” says Peggy Hazard, an artist and curator retired from Tohono Chul Park.

Quilts convey emotion and meaning . But they also speak of home and family, safety and comfort.

That’s what makes them effective tools to highlight social issues.

Hazard joined the project in 2010, working with fellow artists Suzanne Hesh and Alice Vinson to create a quilt for the 205 migrants whose remains were found in the desert in one fiscal year.

“For me, it was a stretch. I was not involved in any kind of activism, only very mildly politically active,” Hazard says. “But something about it spoke to me.”

After the quilt was finished she didn’t plan to stay involved with the project. Yet she kept coming back to it.

In 2012 she curated an exhibition at Tucson Meet Yourself called “Quilts Making a Difference,” which showed activist and fundraising quilts, including the Migrant Quilt she had worked on. Two years later, attending the annual American Quilt Study Group Seminar, she found herself pitching the migrant quilts as a research topic.

“It was just two days before the meeting, I was literally in the shower washing my hair and I went, ‘The migrant quilts. People need to hear about the migrant quilts,’” she says.

When the seminar came to Phoenix in 2016, she talked to fellow quilters about migrants, the border and the quilting project.

Many audience members told her after that was the first time they had ever heard about migrant deaths.

“I’ve become more of an activist, which isn’t my personality,” she says. “But I think the quilts have the ability to very subtly and quietly and humanly and visually show what’s happening.”

When people don’t matter in death, the violence and hardship they experience in life is also ignored, Ipsen says. By creating the quilts, she and the other artists recognize migrants as human beings whose deaths — and lives — are worth remembering.

Though the quilts have been incorporated into several exhibits over the past several years, Ipsen and Hazard are actively working on to increase their exposure, preparing them to be shown across the country.

Twelve have been completed and four more are in progress — one quilt for each year since the Pima County Office of the Medical Examiner started tracking migrant deaths in 2000.

“They have named all of the migrants for each year. And, to me, that naming is super powerful,” says Sonia Arellano, a University of Arizona doctoral student who is writing her dissertation about the Migrant Quilt Project. “They are there saying, ‘These migrant lives are worth grieving. We must memorialize them. Because if we don’t, who will?’”

Since the beginning of this fiscal year in October, the remains of at least 36 migrants have been recovered in the Arizona desert.

Find all the stories and photographs associated with this project, plus video, at http://www.mujeresarteyresistencia.com/

Beyond the wall: Why we don't need Trump's "great great wall"

The border is their canvas for these art activists

Art activists counter divisive, simplistic narratives with their own stories of U.S.-Mexico borderlands and migration.

Not immediately clear whether he resigned or was asked to leave.

The dog separated from its handler during a tracking operation.

Illegal crossers being snatched for ransom on O'odham land

Letter: Re: the Jan. 5. article “Migrant memorials: Quilts honor migrants who died in the Arizona desert”

I lived in Tucson for about 9 months in 2015 and worked with the Tucson Samaritans. I moved to Oaxaca, Mexico in 2016. I return to Tucson at l…

A bordado, or embroidery, that reads “with you from a distance” is stitched onto a migrant quilt, as are names of people who died in the desert.

Founder of the Migrant Quilt Project, Jody Ipsen, lays out pieces for a quilt. Fabric for quilts comes from clothes collected from “lay-up sites.”

Sonia Arellano looks at a quilt her grandmother made.

Cornelia Bayley holds up a string of skull beads in her quilting room.