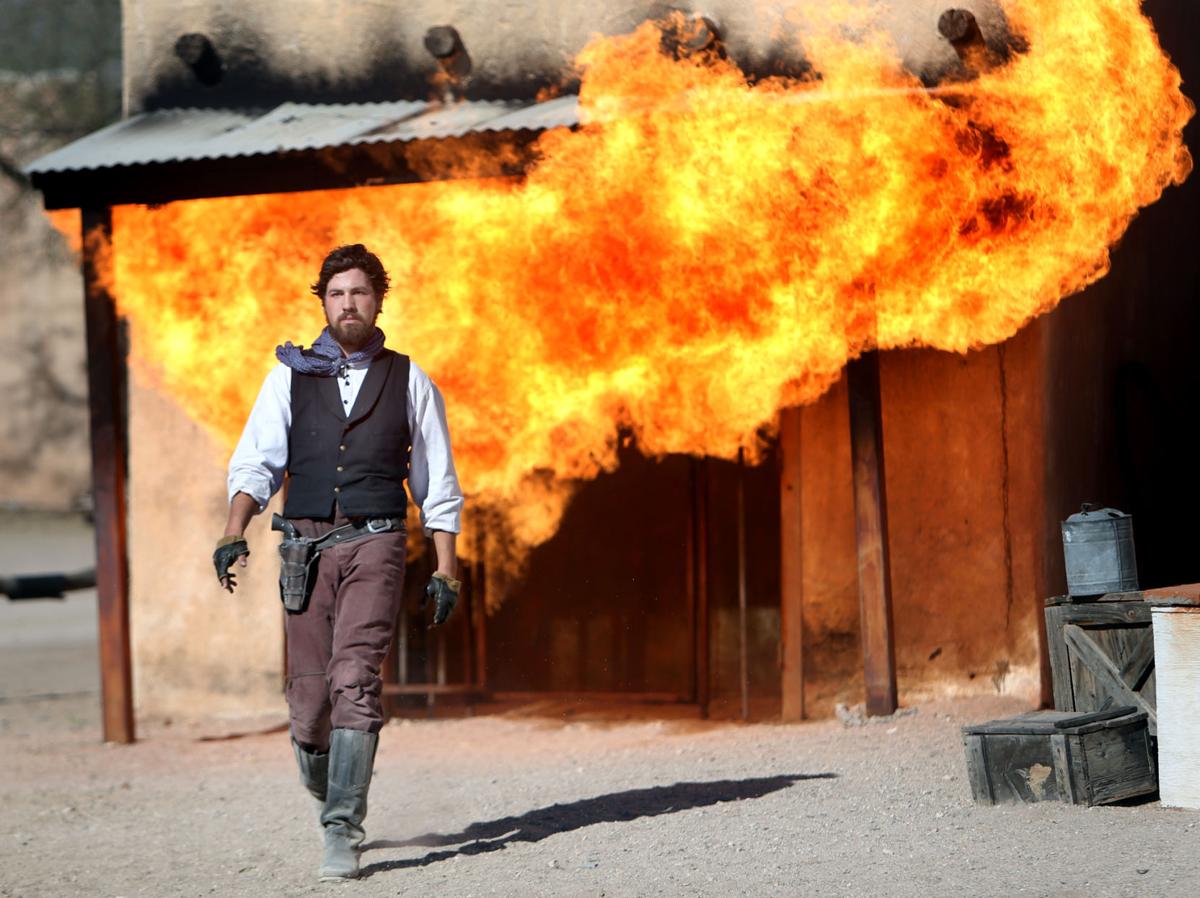 Jesse Pickering’s job as a stuntman at Old Tucson allows him to do things like look cool walking from a building in flames. 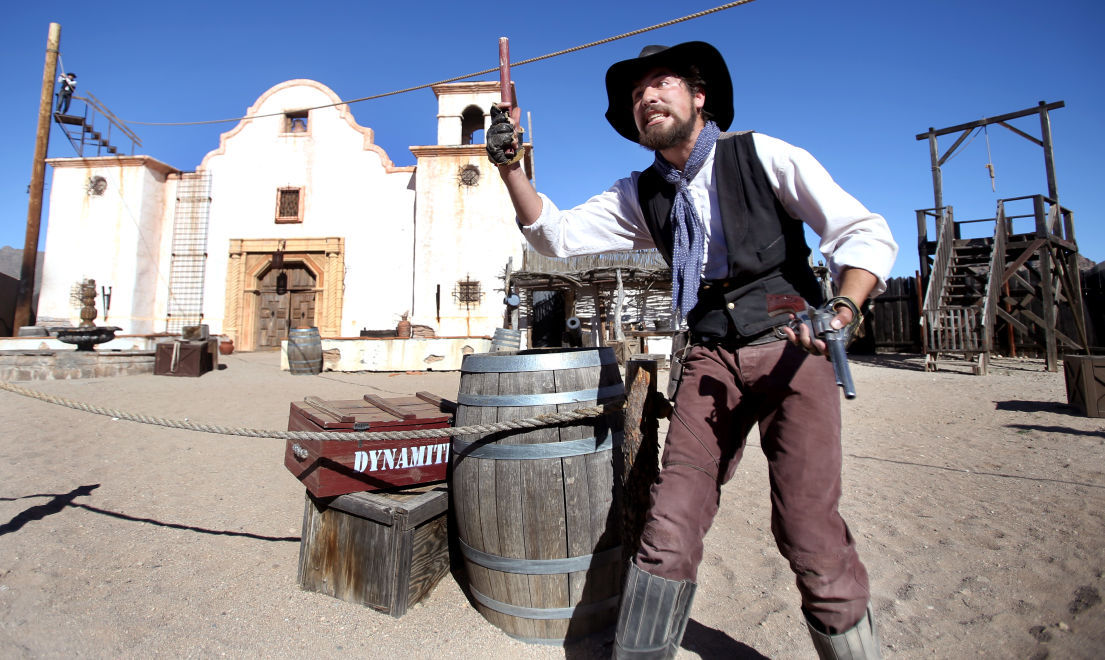 Jesse Pickering, seen here offering fake dynamite to a member of the crowd at Old Tucson, played characters from Goofy to Woody from “Toy Story,” while participating in the Disney College Program in Orlando, Florida. 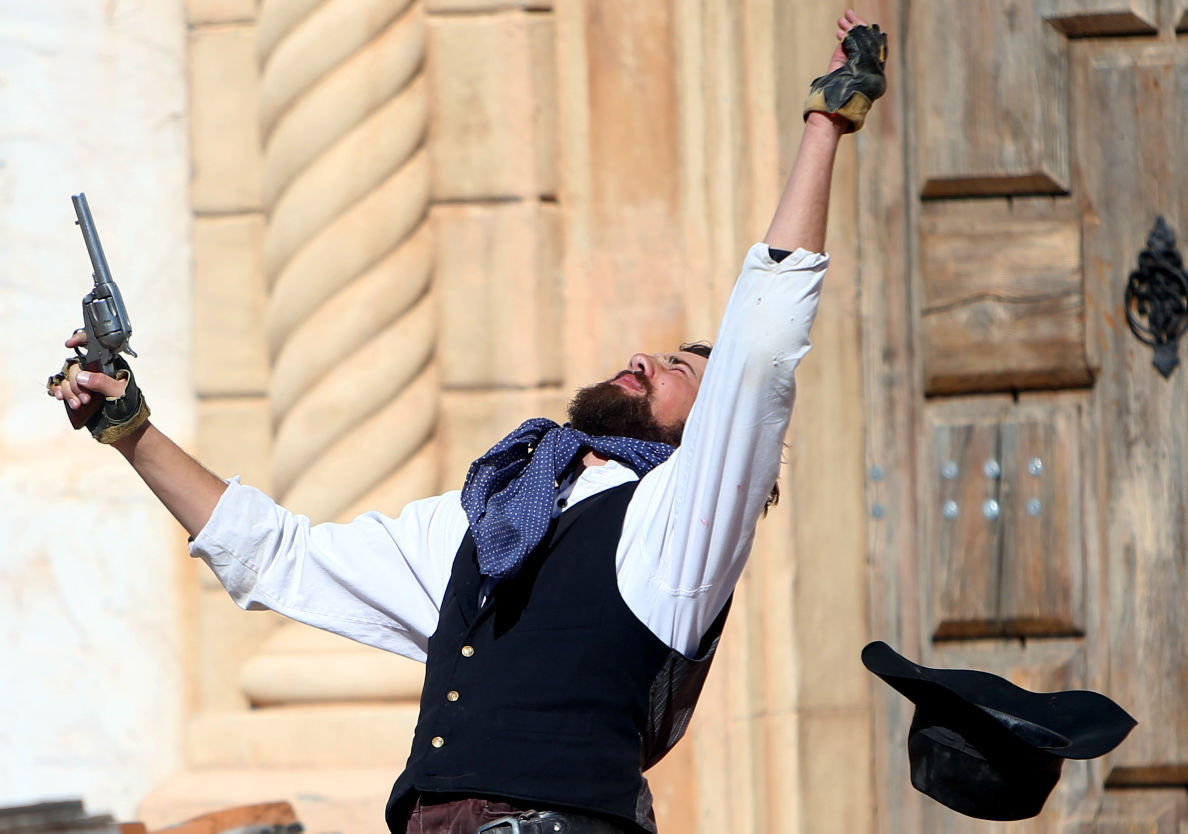 By Elizabeth Eaton For the Arizona Daily Star

Jesse Pickering has been kicked in the face while throwing someone off a building, once won $50 by doing a George W. Bush impersonation and hopes to be a Jedi someday – and he couldn’t imagine his life any differently.

He is a stuntman at Old Tucson, a western movie set, the home of the television show “High Chaparral” when it was shot here from 1967-71, and an amusement park straight out of the 1800s.

Pickering received the facial injury during one of the stunt shows he performs multiple times a week. He has also accidentally punched another actor in the face and received a scar from a botched falling stunt – all dangers of the job, though not necessarily the job Pickering thought he would have.

The 24-year-old Pickering has an associate’s degree in theater from Pima Community College and has been acting since middle school. He had no stunt experience when he joined Old Tucson a little over three years ago. He learned quickly.

“It’s weird,” Pickering laughed, trying to find the right words. “You gotta look like you’re about to knock their socks off, but at the very end you have to pull back a little and turn.”

Even though he stands well over 6 feet, Pickering doesn’t cut an imposing figure; his constant smile and unabashedly loud laugh turn him into more of an oversized teddy bear. His easygoing nature makes him perfect for the more comedic, high energy performances he does most often.

Along with thrilling audiences in Old Tucson’s dramatic productions, Pickering and two other actors dressed as proper cowboys let visitors in on their wild west fighting secrets in their Hollywood stunt demonstrations, which take place in front of the old Mission movie set.

It’s rare to find someone who can smile while getting beaten up, but Pickering manages just fine as he shows the audience how to properly take a stage hit.

Pickering’s over-the-top comedy and willingness to commit to even the most absurd things on stage helped him earn a job where his infectious, constant good mood is quite at home — Walt Disney World.

Pickering took a semester off from PCC — which turned into a year — to enroll in the Disney College Program in Orlando.

Before the internship, he’d never been east of Texas.

Even though Orlando wasn’t his favorite — “It’s just nothing but humidity; ah, it’s gross,” — his animated and “big” acting skills landed him jobs as Goofy, Sully from Monsters, Inc., and Woody from “Toy Story.”

Pickering appreciated his time at Disney World, but he’s found the roles he loves the most are the ones that challenge him to express emotions that he usually doesn’t experience.

It was in PCC’s production of “The Diary of Anne Frank” that Pickering learned what he could do in a serious role. He played Mr. van Daan, the patriarch of the family that hid the Franks from the Nazis.

Todd Poelstra, the theater arts program director at PCC, said the role seemed to suit him.

Pickering has taken on more serious roles at Old Tucson, but nothing quite as emotional as Mr. van Daan. For one of the stunt shows called “No Honor among Thieves,” Pickering plays an outlaw with a conscious who turns on his partner after he kills the bank teller.

“I finally get to be mad!” Pickering said. “I don’t get mad easily, so that’s how I just get to unleash any anger I have into those characters, so it’s nice, cathartic.”

Clad in a prison jumpsuit and confined by a straitjacket, Syd is an escaped science-experiment-gone-wrong. Wandering the eerie streets of Old Tucson, Syd waits for unsuspecting kids to pass by before jumping out — though this often doesn’t have the intended effect.

“I’m not really that good at scaring people, because I hate being scared in the first place,” Pickering said. “And I don’t like scaring little kids, I can’t do it in my heart… and with my floppy straitjacket sleeve I just wave to them,” Pickering said, miming a goofy, flappy wave that is much more likely to give someone the giggles.

Cass Anaya, a coworker and fellow stuntman at Old Tucson, said that it’s hard for Pickering to be scary.

“He’s like a Disney character walking around all the time, so it’s funny seeing him play evil characters because it’s the total opposite of what he is,” Anaya said. “He’s just goofy, quirky, and scaring people isn’t in his nature. Any little kid just instantly trusts Jesse and wants to hug him. That’s the kind of vibe he always gives off.”

“There’s just an essence that exudes from him,” Poelstra said. “You know you can trust him as an individual and a character. He is for real.”

Pickering sees more Disney in his future: next summer he plans to pursue his acting dreams in California, and hopes to get a job at Disneyland until he makes it in Hollywood.

The lifelong “Star Wars” fan hopes to become a part of the Jedi Training Academy, where cast members dress as Jedi Knights and train visitors in the way of the Force to ultimately take on either Darth Vader or Darth Maul.

Jesse’s other goal is to fight the Empire on the big screen.

“You know when you have those dreams where you’re not sure if they’re gonna happen, but it’d be really awesome if it did?” Pickering asked. “I’d love to be a part of one ‘Star Wars’ film before I die.”

Poelstra can’t wait to see where his student’s career goes.

Despite his father’s attempts to convince him to get a business degree “just in case,” Pickering can’t imagine a life without performing.

“I don’t know what else I could do. I don’t know. I don’t see myself doing anything outside of being a performer,” Pickering said. “How can I have a backup plan when all I want to be is a performer, no matter where that is?”

Get out your autograph book: Western television and movie stars are coming to Tucson for The High Chaparral Reunion starting March 17.

The first Western show to be shot on location instead of in a Hollywood studio, “The High Chaparral” was filmed at Old Tucson and put the city on the map, said Penny McQueen, the event organizer. The series aired on television from 1967 to 1971.

“People were amazed by it, amazed by the country and how beautiful it was, and the cowboys were dirty and hot and sweaty, and they’d never seen that before,” McQueen said. “The one word that was always said about it was ‘gritty.’”

Reunions began taking place in Los Angeles in 2003, but since 2009, fans of the show and its stars have gathered annually at Old Tucson to share their love of “The High Chaparral." This year, the guest list has expanded to include many more actors from a variety of different Westerns.

Some of the featured attendees include Robert Fuller, who was a part of “Laramie” and “Wagon Train”; Susan McCray, who produced, among others, “Little House on the Prairie” and “High Chaparral”; and Roberta Shore from the “Virginian,” who will perform the play “Love Letters” with Western author Boyd Mages on Saturday night as part of the reunion’s program.

Other programming includes photo opportunities and autograph sessions with the stars, Q&A panels and lunch at the set of "The High Chaparral" ranch house in Old Tucson.

Tickets start at $30 a day, and the full VIP “Ranch Owner” experience has a price tag of $500 for the whole weekend, from Thursday, March 17 to Sunday,M arch 20.

Find the full schedule and more at thehighchaparralreunion.com

Taylor Swift, Cardi B and Harry Styles lead the list of performers at the 2021 Grammys

Taylor Swift, Cardi B and Harry Styles lead the list of performers at the 2021 Grammys

Nearly 40-percent of Old Tucson, including many of the most-famous wood structures, was destroyed by fire on April 24, 1995. The park was rebu…

Is America's best burrito in Yuma?

If you're driving to San Diego, you have to stop at this restaurant ... Video by Andi Berlin, Nick Murray and Samantha Munsey.

How to make Chiltepin hot chocolate

Kick your cocoa game up a notch by using real chocolate and local chiltepin chiles.

Here are seven spots to hit up while in the neighborhood. Video by Andi Berlin.

Jesse Pickering’s job as a stuntman at Old Tucson allows him to do things like look cool walking from a building in flames.

Jesse Pickering, seen here offering fake dynamite to a member of the crowd at Old Tucson, played characters from Goofy to Woody from “Toy Story,” while participating in the Disney College Program in Orlando, Florida.