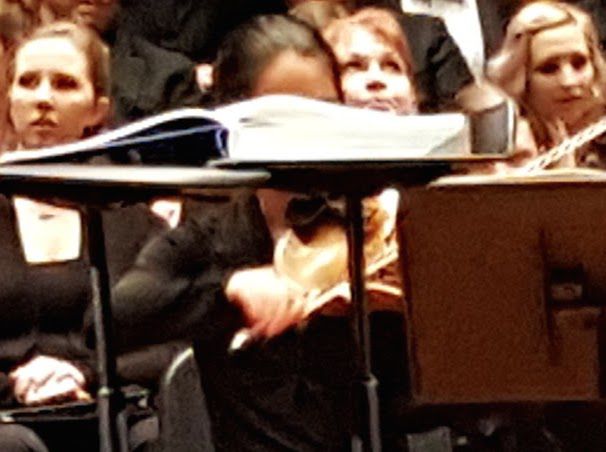 By the time "Elijah" was making his ascent into heaven aboard a fiery chariot, the audience in the packed house at Catalina Foothills High School Friday night was on the verge of bounding from their seats.

We knew it would be a dramatic finale, but nothing could  have prepared us for Grammy-winning baritone Richard Paul Fink's stunning performance.

True Concord Voices & Orchestra founder and Conductor Eric Holtan predicted Fink would "make your chest rumble," and he was right. But he left out the goosebumps we experienced and how our hearts pounded a little harder when Fink sounded the cry of "Lord God of Abraham, Isaac and Israel!" in the concert's first half. His dramatic nuanced baritone took on a sense of urgency without losing any of its warmth and underlying tenderness. When he sang of the righteous shining forth in the glory of God, it was almost as if he were standing on that stage addressing God himself with twin emotions of wonderment and humility.

And Holtan had no idea what talent he was getting in the deal with the trio of soloists from the Chicago-based Ravinia's Steans Music Institute, which is in Tucson as part of the fifth annual Tucson Desert Song Festival. Ravinia offered up soprano Heather Phillips, mezzo Rebecca Ringle and tenor Trey Smagur to join True Concord's 50-piece orchestra and 70-voice choir — 45 of them graduate students from the University of Arizona Fred Fox School of Music. Ravinia officials viewed it as an opportunity for the young singers to get in a bonus experience to their recital Feb. 3 with fellow Ravinia singer baritone Nathaniel Olson.

All three were terrific. Phillips' clarion soprano hung delicately in the air at its highest register and Ringle, who had a little trouble projecting during an early duet with Phillips, found her voice, and it was pretty incredible, with wonderful colors and exuding an exciting warmth. But Smagur turned out to be something very special.

Smagur looked like a college linebacker, all shoulders and buff, tall enough that he appeared to have to slightly duck to get through the stage door. When he took his seat at the far end of the soloists, with a perfect glimpse of Maestro Holtan, he looked almost nervous with nearly 700 folks fixing a gaze on him.

But then he started to sing, his voice at once tender and vulnerable before giving way to an amazing confidence and control that defied his age — 25 years — and sucked us into another place. He followed Fink's lead and gave a compassionate performance that made you wonder: When will he win his Grammy, or make his Metropolitan Opera debut, and will we be lucky enough to see it and tell people around us, "I saw him when ... "?

"Elijah," the cornerstone of the fifth annual Tucson Desert Song Festival, was a true test for True Concord, a mammoth oratorio that plays more like an opera. It required that everyone play their A game. In classical music, that means the choir and orchestra need to mesh, with voices and instruments locking hands and keeping step. True Concord on Friday night found that balance; voices and instruments finished one another's sentences without ever interrupting or speaking over one another. And the sound they created together was thrilling. When the voices came together in perfect harmony it was like hearing angels singing on high, cheering on Elijah's fiery chariot as he rode away to his glory.

The 2017 Tucson Desert Song Festival runs through next weekend. Coming up this weekend:

'Butterfly" takeaways: Boos, cheers and no where to park

Yes, they were booing, but let us explain.