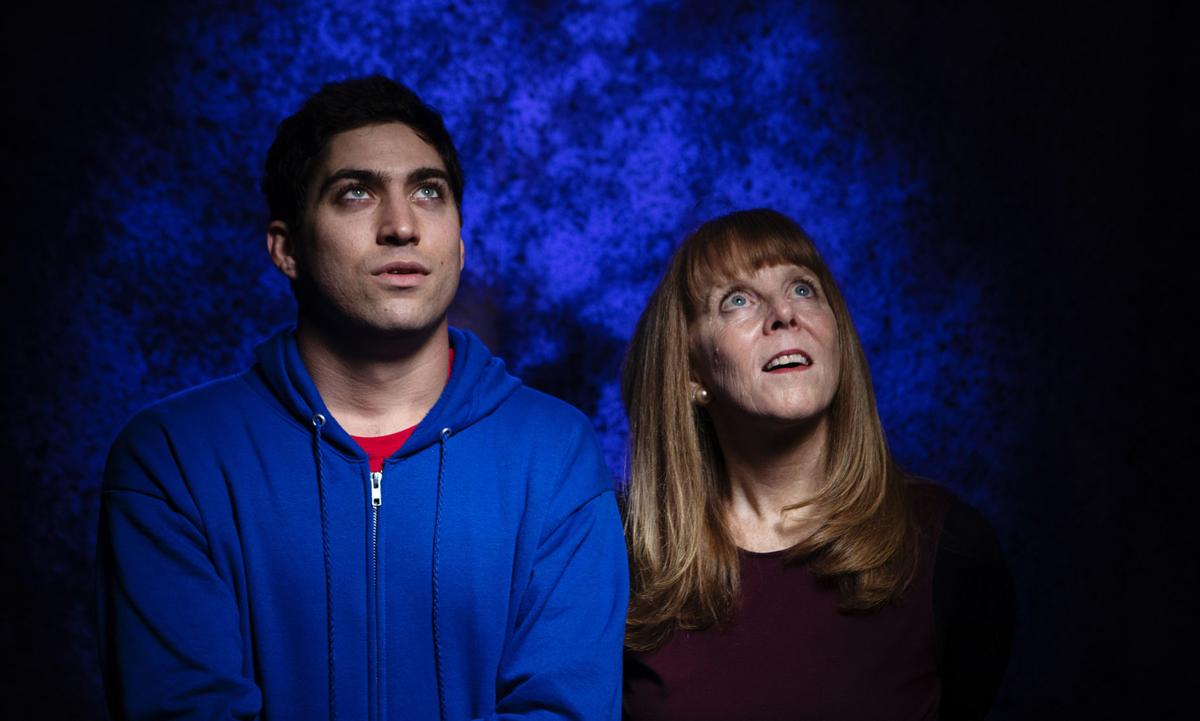 Hunter Hnat and Patty Gallagher perform in The Rogue Theatre’s “The Curious Incident of the Dog in the Night-Time.” 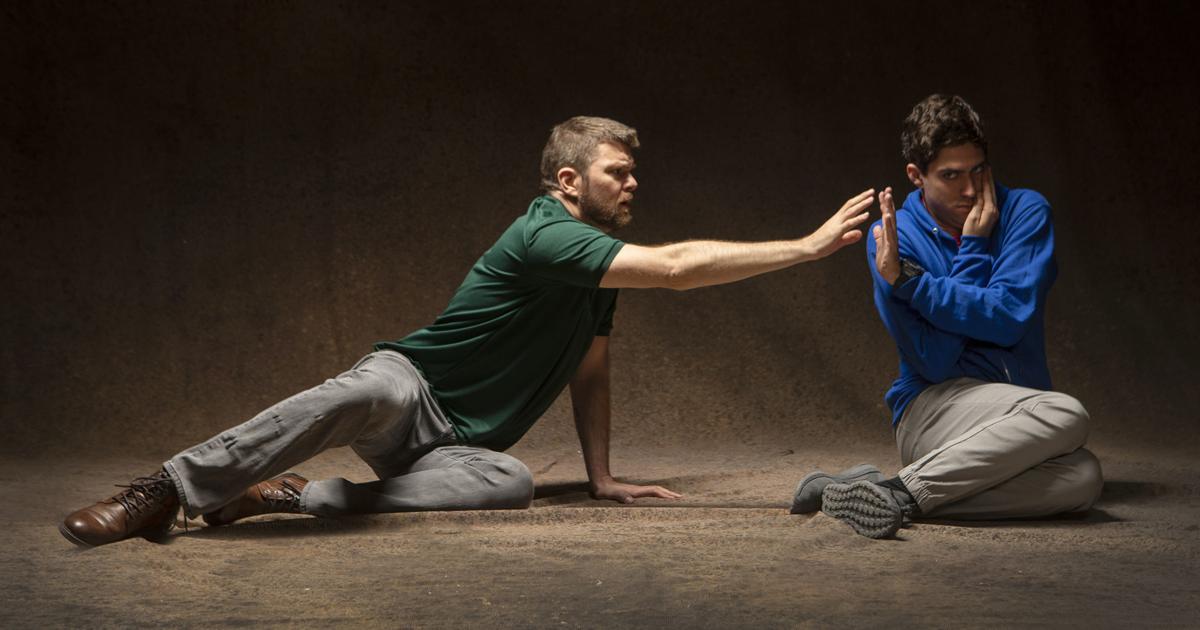 Ryan Parker Knox, left, and Hunter Hnat in The Rogue Theatre’s production of “The Curious Incident of the Dog in the Night-Time.”

Don’t expect a lot of fancy special effects in The Rogue Theatre’s production of “The Curious Incident of the Dog in the Night-Time.”

Certainly, the adaptation of Mark Haddon’s novel about a young boy, Christopher, who sets out to solve a mystery, calls for it: There are scenes in crowded train stations and cramped trains, a harrowing one in a subway station, and a character who hides in the most unlikely of places.

Fancy lights and sound could convey those, but it’s not what Director Cynthia Meier has opted for.

“The first stage direction in the play is that all the actors are on the stage for the whole play,” she says.

“So instead of flashing lights, we’re using the company to create sound effects and the environment Christopher is in. … We are not physically creating the inside of a London subway station, so bring your imaginations.”

The bestselling book was adapted for the stage — at Haddon’s request — by Simon Stephens.

The story: Christopher, who lives with his father, is an awkward teen, brilliant in math, but socially uncomfortable. Loud noises disturb him, he can’t be touched without screaming, he is particular about colors — he hates yellow, for instance, so bananas gross him out. He attends a school for children with special needs, and has a teacher there who encourages him to write a book after he discovers a neighbor’s dog has been murdered and he wants to find out who did it.

In his quest to write the book, he discovers secrets his father has kept from him. He had always trusted his father; to find out he had been lying to him, especially with the secret he’s hoarded, throws Christopher’s world into chaos.

Stephens stayed faithful to the book.

“The thing the playwright did that is so interesting is he’s taken the book and put the narration into the mouth of the teacher, and it really works,” says Meier. “She’s reading the book and it comes to life from there. It’s been a delightful, very creative experience.”

While Christopher is perceived as “different,” he is a character that most can relate to, says Meier.

“I was thinking about how many people relate to Harry Potter— none of us are wizards, but there is something so relatable about him. I feel that way about Christopher. There’s something about him that we can all relate to.”

The story of Christopher can give us “a deeper appreciation of differences, of different ways of being in the world,” says Meier.

In the end, she says, “I think audiences will walk away with a sense of how important it is to be kind to each other. There’s a lot of people trying to help Christopher find his way. I find that really inspiring; I think people will be touched by it.”

There isn’t much that’s funny about poverty. But playwright David Lindsay-Abaire uses humor to make a serious point about the issue in his pla…

Friday's concert is an encore to her 2012 concert with the TSO.

Martin McDonagh works his magic, and dark comedy, in "Cripple of Inishmaan"

Really, there wasn’t much to laugh about in Erma Bombeck’s life.

More than 250 artists plan to open their studios and greet visitors curious about their work.

Natalia Lebed has a definite mission with her artwork.

Gig at Laff's Sunday is sold out.

A celebration to mark the silver anniversary is slated for Nov. 11.

Faith, and the lack of it, drive Invisible Theatre play

Hunter Hnat and Patty Gallagher perform in The Rogue Theatre’s “The Curious Incident of the Dog in the Night-Time.”

Ryan Parker Knox, left, and Hunter Hnat in The Rogue Theatre’s production of “The Curious Incident of the Dog in the Night-Time.”