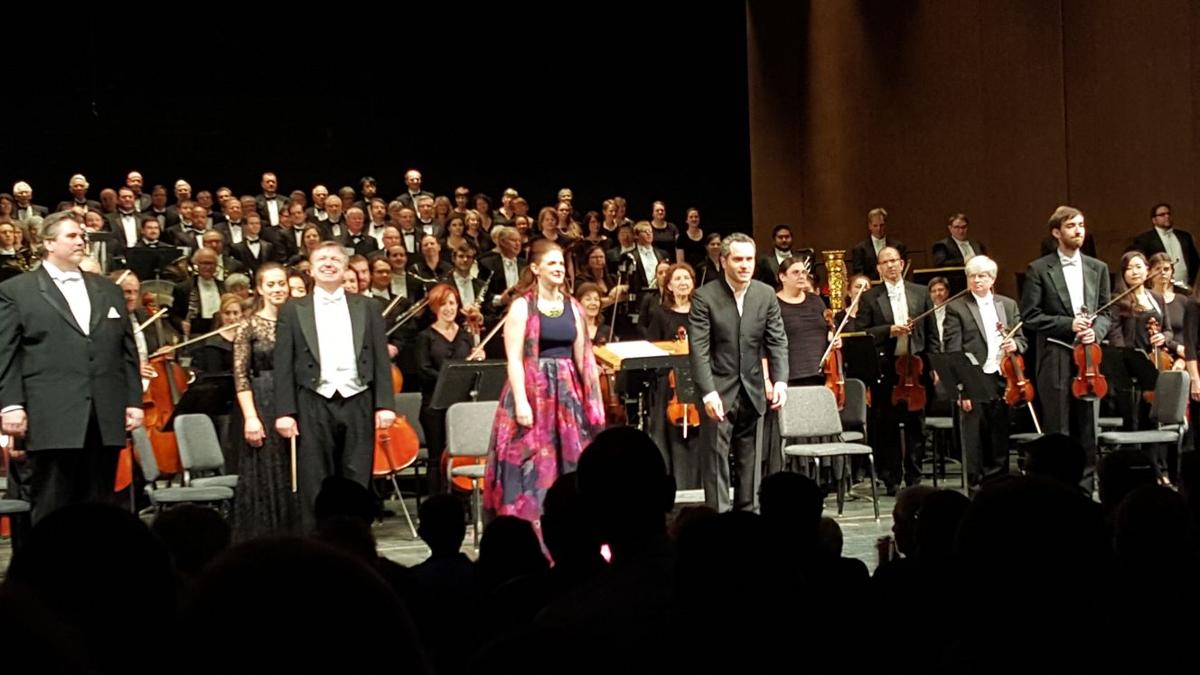 A new program will bring young audiences into the symphony hall for the 2016-17 TSO season. 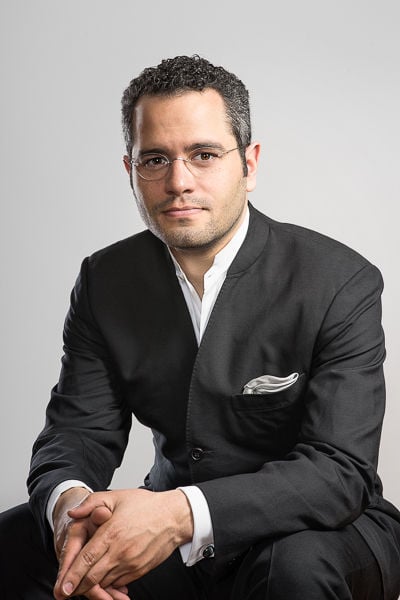 Andrew Grams will be both violinist and conductor. 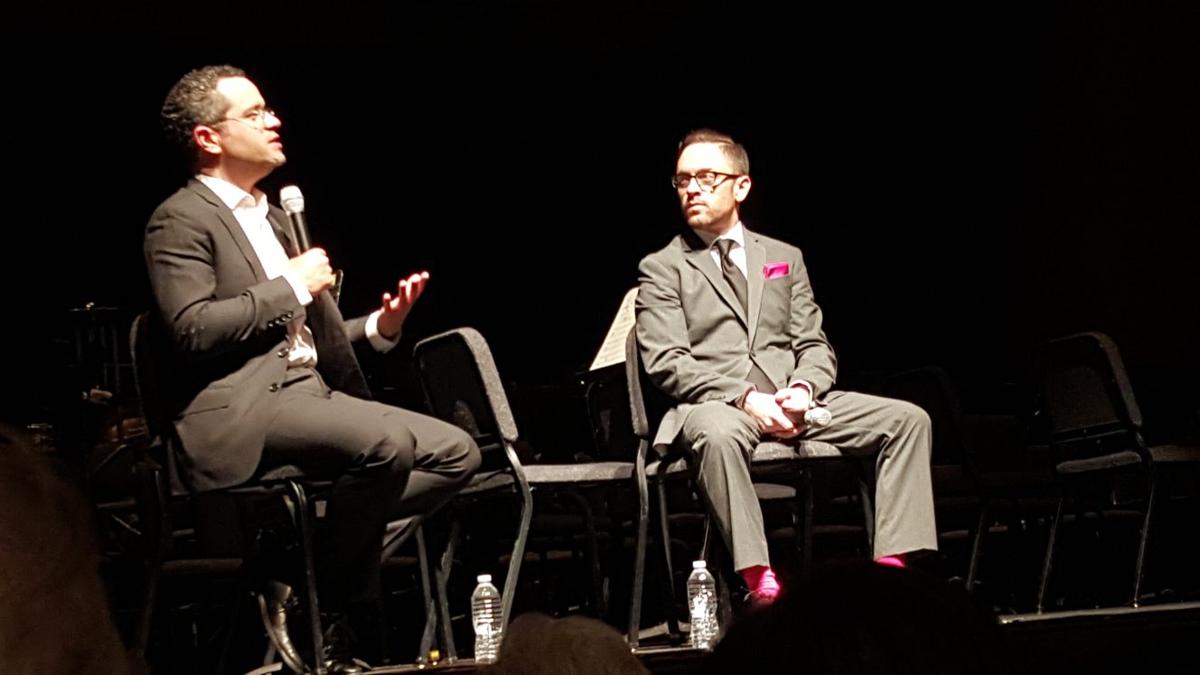 Thanks to the threat of parking woes from the Bernie Sanders rally at Tucson Arena Friday night, many folks arrived to the symphony early enough to catch the pre-concert talk with conductor Andrew Grams, left, and the TSO's Benjamin Nisbet.

Andrew Grams trotted on stage with his hand extended below his knee. As he passed the trio of Tucson Symphony Orchestra guest vocalists, he gave them a low-five — that’s a high five down low. He looked like a basketball player being introduced to the starting lineup and greeting his teammates on his way to center court.

It was a playful moment that came at the end of the TSO’s performance Friday night of “Carmina Burana,“ Carl Orff’s behemoth choral piece that employed the full force of the TSO, its chorus and the Tucson Arizona Boys Chorus. And it epitomized Grams’ approach to the piece; take it seriously, but leave yourself wiggle room to let the spirit move you.

The result: A performance of “Carmina Burana” that raised the bar for those that follow.

Under Grams’ baton, the 65-minute work played as a near continuum with no true interruption aside from a pause when the first of the three soloists, baritone Richard Zeller, came on stage. It felt more like an unstaged opera than a choral piece, with each of the 23 songs flowing effortlessly into one another so that we didn’t lose our place.

And Grams brought out colors and passionate play in the orchestra that is essential in a piece as demanding as “Carmina Burana.” And, quite frankly, one with so much going on — drama, anguish, joy and lust.

Orff’s piece is based on 23 songs culled from the 13th century satirical and often bawdy writings of clergy and students. The songs change tempos and moods, going from cinematic in scope to outright bombastic with crashing cymbals and drums to strings played with dynamic force and brass and winds blaring at their loudest volume. The choir alternately sings and chants, mostly in Latin and in German so even if we wanted to sing along we probably couldn’t.

The orchestra followed Grams lead at every turn, performing with a sense of purpose and precision. The cacophony of the opening lament to fate in “O Fortuna” didn’t feel forced and never wavered even when the TSO Chorus joined in. The sound of their voices against the grain of that big sound filled Tucson Music Hall with a clarity we are not used to in that space; the voices and instruments never seemed to overpower one another and get muddy.

About those voices: We don't often see the TSO Chorus, but every time we do they impress. On Friday night, they were perhaps the best we’ve ever heard. Clarion voices that never got buried beneath the force of the orchestra — which also goes to Grams’ credit; he struck the perfect balance of instruments to voices.

The Tucson Arizona Boys Chorus, dressed in red robes and standing off to the side of the stage, next to the bass players and a handful of violinists, were pretty terrific, as well. As TSO operations and orchestra manager and violinist Benjamin Nisbet said during the pre-concert talk with Grams, we often take the Boys Chorus for granted. But on Friday night, they demonstrated their maturity and vocal prowess that comes from their dedication to their craft.

Also worth a shout-out: Guest vocalist Maeve Höglund had a lovely, warm soprano that married well with the Boys Chorus’ voices. And tenor Christopher Pfund, who sang only three verses in the performance, was the standout with his charismatic portrayal of a swan on a spit. His entrance on stage, glancing about the orchestra with the look of someone who had wandered in off the street with no clue why they were there, was priceless and fit his character of being an innocent and unwilling guest for dinner.

At one point Friday night, a man in the audience applauded as Grams was about to segue into the next song, The man, in a voice loud enough for the audience and Grams to hear, apologized and Grams turned to him and bowed. Of course, that prompted the audience to laugh and turned what could have been an awkward moment into a highlight.

But more importantly, it followed with what we have come to know of Grams in his four podium appearances with the TSO: When you give yourself wiggle room, the spirit will move you.

Thirty minutes before Friday's Tucson Symphony Orchestra concert at Tucson Music Hall, Democratic presidential hopeful Bernie Sanders was next door at the Tucson Arena telling 7,000-plus potential voters why he feels he can beat Hillary Clinton for his party's nomination.

And while the competing events created a bit of a scramble for parking spaces, it did have one positive impact on the orchestra: The TSO audience arrived early enough to catch the pre-concert talk an hour before showtime.

That meant Friday's pre-concert audience was two, three or maybe even four times the usual size to listen to guest conductor Andrew Grams and TSO  operations and orchestra manager Benjamin Nisbet, who also plays violin in the orchestra, talk about "Carmina Burana."

Normally a couple hundred people attend; by the look of the filled seats throughout the Music Hall Friday, upwards of 800 or 900 people  of the audience of nearly 1,800 attended the talk.

We can't help it; we love 'Carmina Burana'

Competing events means you might have to hike into Music Hall for Tucson Symphony Orchestra concert.

Review: Andrew Grams and the TSO

Does Phoenix have better Mexican food?

A new program will bring young audiences into the symphony hall for the 2016-17 TSO season.

Andrew Grams will be both violinist and conductor.

Thanks to the threat of parking woes from the Bernie Sanders rally at Tucson Arena Friday night, many folks arrived to the symphony early enough to catch the pre-concert talk with conductor Andrew Grams, left, and the TSO's Benjamin Nisbet.