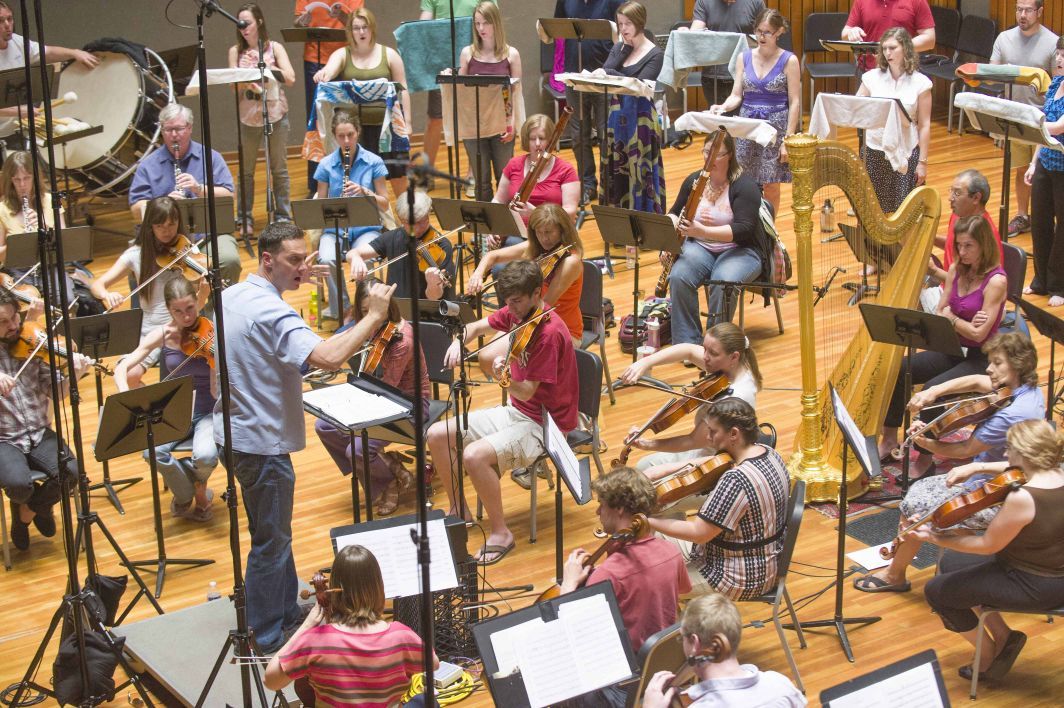 True Concord Voices & Orchestra recorded its CD “Far In the Heavens” in May 2013. It includes “Prayers and Remembrances” and five other pieces by Stephen Paulus. 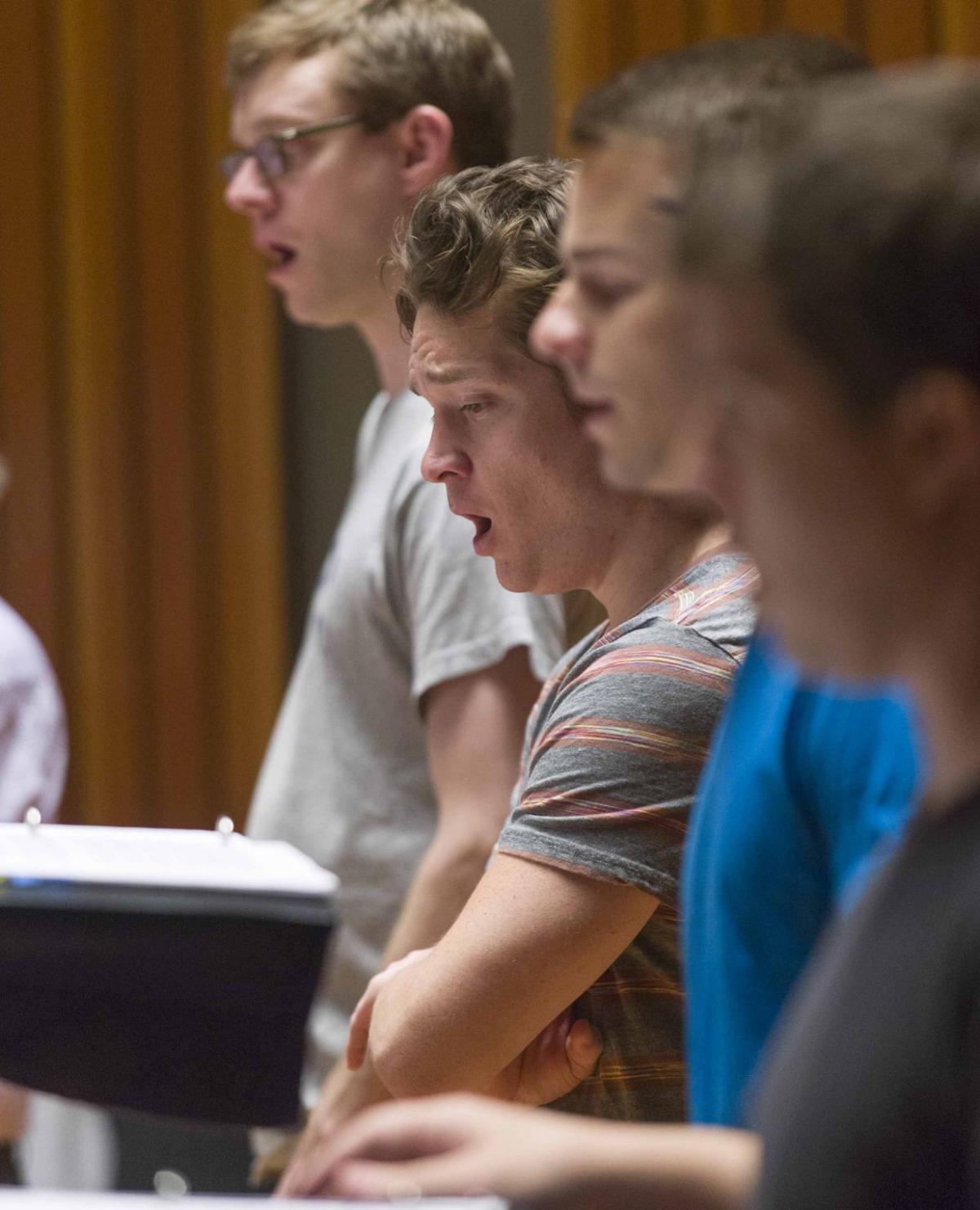 The professional choir is set to perform its landmark Stephen Paulus 9/11 commission “Prayers and Remembrances” at Lincoln Center’s Alice Tully Hall on Friday, Sept. 11 — the 14th anniversary of the terrorist attacks that leveled the World Trade Center.

It will be the first time the professional choir has performed the piece outside of Tucson, where the choir premiered it on Sept. 11, 2011, with the Tucson Symphony Orchestra at Centennial Hall.

“It’s going to be a powerful event,” said Eric Holtan, True Concord’s founder and music director. “The confluence of both these things — performing a piece that Stephen wrote and then performing it on 9/11 in New York City at the epicenter of these tragedies.”

The New York concert celebrates the release Friday of True Concord’s CD “Far In the Heavens,” which includes “Prayers and Remembrances” and five other Paulus pieces that had never been recorded. Paulus, died in October, 18 months after suffering a devastating stroke. He was 65.

About 50 Tucsonans including True Concord donors and subscribers will be in the audience, which could fill Alice Tully’s nearly 1,100 seats. Among them will be Paulus’ widow, Patty, and the couple’s two sons.

Patty Paulus said that performing the piece in New York “is a confluence of all sorts of wonderful, positive karma.” Holtan had told her his vision was to commission the piece from her husband, record it and “it needs to be performed in New York.”

“And here it is,” she said last week. “We are so thrilled to be there.”

Holtan said the program for the New York concert is the same: They will open with the Requiem and devote the second half to Paulus.

True Concord will fill the Alice Tully stage with 32 vocalists from Tucson, Phoenix, Los Angeles, Seattle, Chicago, Boston and Atlanta — all regulars with the choir. The orchestra, made up of TSO members, will number 34 and will include the rock-star harpsichordist Guy Whatley from Phoenix, who has become a regular on Tucson classical music stages.

Holtan said the trip is costing True Concord $225,000, money that it raised from a sizable gift from patron Dorothy Vanek — who sponsored the 2010 Paulus commission — and a $40,000 National Endowment for the Arts grant. The bulk of the money came from its rank and file donors.

“This is a huge validation from our community of the importance of a project like this, to take this music and share it in what is arguably the cultural capital of the world,” said Holtan, who noted for comparison that True Concord’s annual operating budget is $400,000.

“I don’t think he had ever had really that much input on his previous CDs. This one he was involved in directly,” she said. “The whole album is a culmination of a very mature composer.”

“Far In the Heavens” is being released by the national classical music imprint Reference Records and is being distributed by the classical music behemoth Naxos Records. Holtan said Naxos will release 300 new CDs on Sept. 11, but True Concord’s is on the top of the pile when it comes to marketing. Naxos has sent copies to music reviewers around the country and to public radio stations including in Phoenix and Minneapolis, which have agreed to play the CD. Stations in Chicago and Wisconsin already have expressed interest.

“There are stations that are interested in it not only because of the 9/11 connection. Naxos is really hot on this project because it was Stephen Paulus’s last work,” said Holtan. “He was here in Tucson recording and six weeks later suffered a stroke from which he never recovered.”

“Far In the Heavens” was Paulus’s last big project and re-scoring “Nun dimittis” was one of his final compositional acts.

Patty Paulus said she played the album for her husband while he was in the hospital. Although he was not able to communicate, she believes he heard it.

“I got this CD in the mail and I played it and I burst into tears,” she said. “It’s been very bittersweet. That’s why this will be a great celebration in New York.”

“Far In the Heavens” could be the recording that dispels any notion that classical music can’t reside and thrive outside a major city.

The CD from True Concord Voices & Orchestra — formerly Tucson Chamber Artists — is anchored by the Stephen Paulus oratorio “Prayers and Remembrances,” which the professional choir commissioned from the Minnesota composer in 2010. True Concord and the Tucson Symphony Orchestra teamed up to perform the world premiere on Sept. 11, 2011.

The disc, being released nationwide on Sept. 11 by Reference Recording and distributed by the behemoth classical music label Naxos Records, includes five other Paulus choral works that have never been recorded. True Concord, led by founder and Music Director Eric Holtan, made the recording at Catalina Foothills High School in May 2013 with Paulus and Grammy-winning producer and conductor Peter Rutenberg. Paulus returned home to Minnesota and two months later, in early July, suffered a devastating stroke from which he never recovered. Paulus died on Oct. 19, 2014; he was 65.

For those of us who were in the Centennial Hall audience for the 2011 world premiere, the recording of “Prayers and Remembrances” will bring back memories of that day. But the recording is in some ways more poignant than the live performance. The acoustics at Catalina Foothills are much crisper; the rumbling percussion and shimmering cymbals in the opening movement add to the sense of tragedy as the choir, in perhaps the finest voice that we’ve heard since the group was formed a dozen years ago, sings those fateful words — “They are all gone.”

The seven-movement piece was easily one of Paulus’s masterpieces, an oratorio that combines the text of Henry Vaughn’s poem “They Are All Gone” with excerpts from sacred and secular works ("Lord Make Me an Instrument" from St. Francis of Assisi, a passage from the traditional Navajo prayer "In Beauty It Walks" and passages from Mohammed and Hebrew texts) to create a work that honors the sorrow of that fateful day and celebrate the hope of moving past it and healing.

The orchestra, comprised of TSO players, had its biggest role in “Prayers and Remembrances,” but oboist Sara Fraker and harpist Christine Vivona had starring roles on “The Incomprehensible,” a piece that True Concord commissioned from Paulus. The CD title borrows from the piece, which also includes a passing nod in the oboe to the opening theme for the HBO series “Six Feet Under” — something that Rutenberg enthusiastically points out in the liner notes.

The CD also includes “Nunc dimittis,” a work Paulus originally scored in 2008 for organ and voice. Paulus rewrote it for unaccompanied voice the day before True Concord recorded it because there was no organ at Catalina Foothills High School. Frankly, the a cappella version, as performed by True Concord, makes a strong argument that the piece doesn’t need any instrumental backing. “Nunc dimittis” uses the Biblical texts of Luke 2:29-32, often heard in the Lutheran liturgy. But instead of serving as an ending for a church service, the choir’s version, with perfectly pitched harmonies that created a symphony on its own, sounded much more like parting words that you would hear sung in a hopeful, inspired way at a funeral. Ironically, that version was performed at Paulus’s own funeral last year.

Where to buy 'Far In the Heavens'

True Concord Voices & Orchestra's CD "Far In the Heavens" will be available beginning Friday, Sept 11, at iTunes, amazon.com or pre-order online at trueconcord.org and receive a discount off the regular price.

True Concord also will sell copies at its concerts beginning with its season-opener "Fanfare!" Oct. 2-4. For locations and more information, visit trueconcord.org

Ensemble teams up to provide free tickets for Friday's 9/11 concert at Lincoln Center.

Shoots up eight spots to land in the top 10.

Instead of having choirs perform the works, he's bringing in narrators to perform dramatic readings.

True Concord Voices & Orchestra recorded its CD “Far In the Heavens” in May 2013. It includes “Prayers and Remembrances” and five other pieces by Stephen Paulus.