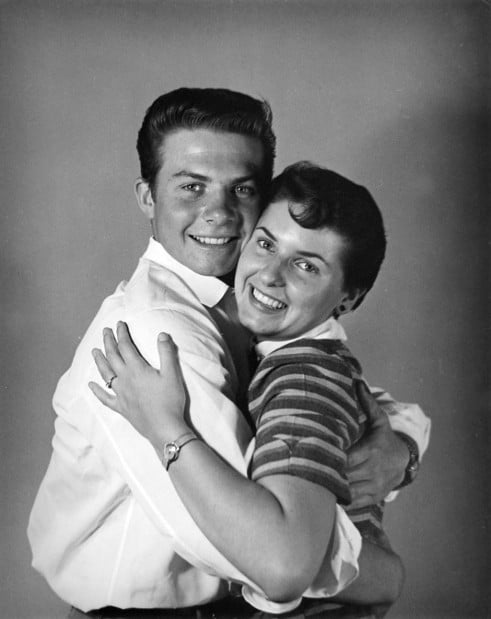 Peter and Patricia Likins, both 18, at their engagement in 1954. 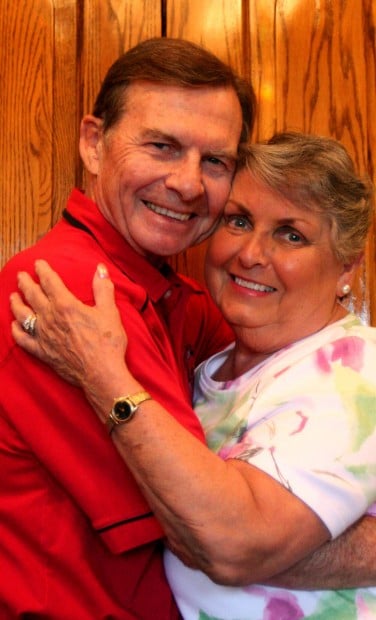 Peter and Pat Likins at her 75th birthday last month. 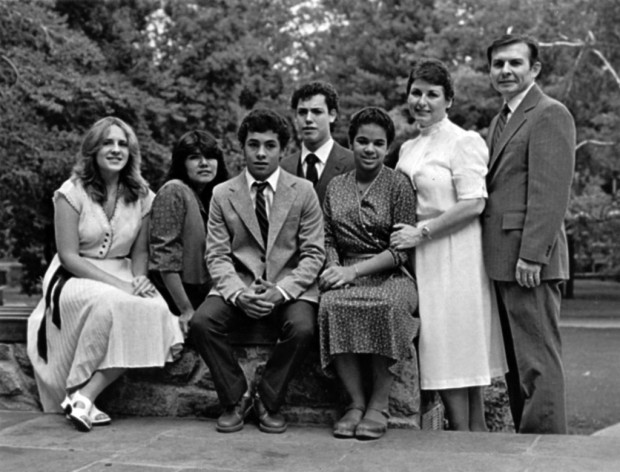 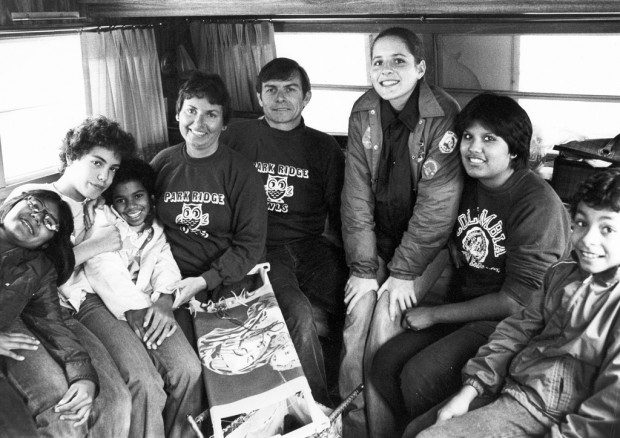 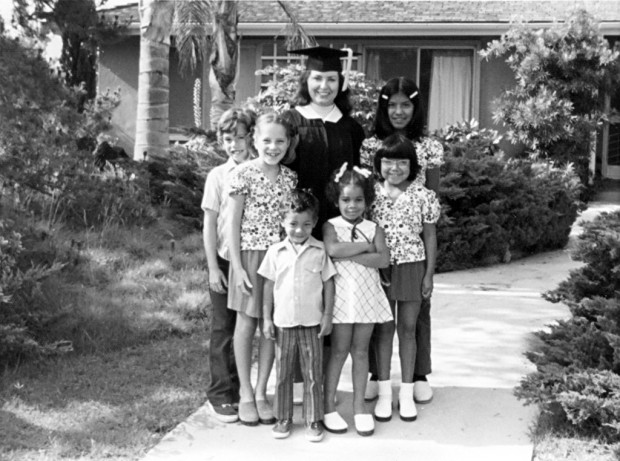 Pat Likins, who received her bachelor's degree from Cal State Northridge in 1973, is surrounded by Paul, left, Lora, John, Krista, Linda and Teresa. 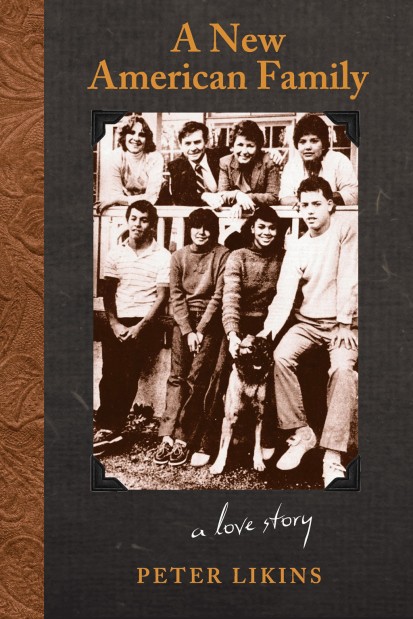 "Take her back," a physician advised anxious parents Peter and Patricia Likins, as though their weeks-old adopted baby girl, Lora, was a malfunctioning kitchen appliance.

Even though a hole between two chambers of Lora's heart threatened her life and she wasn't a surgical candidate in 1963, the 26-year-olds didn't return her. They believed accepting a child for adoption was a lifelong commitment.

The couple went on to raise Lora and five other children who in the 1960s were considered unadoptable.

For Pat and Pete Likins, parenthood and strong family bonds are forged by loyalty and love and don't require birth or a bloodline.

The memoir is a love story for Pat and their family, who together faced racial prejudice, mental illness, drug addiction and addressed homosexuality and unwed pregnancy, according to Likins.

Likins, who holds three degrees and numerous honorary degrees, describes himself as "a working-class guy with an education."

Standing on the landing a few steps above the living room of his 6,000-square-foot east-side Tucson home, Likins points out that the room is larger than the cabin in which he grew up.

Born on Independence Day in 1936, he was the second of four children. His neighborhood-bar-loving father volunteered to serve in the Navy in 1944 and did not return to the family.

Likins' mother found work as a department-store clerk and took her children in 1946 to live in a two-room, tar-paper shack in Paradise Park in the redwood forest of California's Santa Cruz Mountains.

Family and career mementos, knickknacks, photos, framed needlepoint pieces, books and file folders fill shelves, curio cases and the walls of their Tucson home - a poignant contrast to the cold-water cabin that had a toilet in a closet and no tub or shower.

"Poverty was a powerful motivator for me," Likins says. When he realized in high school that he had an aptitude for math, he selected engineering as a career because of its employment and earning potential.

His education and career underpins the family's story.

Many Tucsonans recognize Likins as the UA's 18th president, serving from 1997 to 2006, and closing 53 years of involvement in universities.

He was on UCLA's faculty for 12 years, and was a professor, dean of the School of Engineering and a provost at Columbia University in New York.

Likins published numerous academic papers, journal articles and books on heady topics, such as engineering mechanics and the dynamics of flexible spacecraft.

"Education was our salvation," Likins says.

The Beatles singing "Well my heart went boom, When I crossed that room, And I held her hand in mine" comes to mind when Likins talks about the evening he met bubbly Pat Jolley at a junior high school graduation dance in 1950.

Pat wrote in her diary: "Tonight I met the boy I'm going to marry."

They became engaged in July 1954, the summer after Likins' freshman year at Stanford and Pat's high school graduation. They were married Dec. 18, 1955, when both were 19.

The couple wanted a large family - at least four children - but suffered several early-stage miscarriages. Undeterred, they confected their family of six children with an age span of less than seven years.

In 1963 they took Lora to their student-housing home in Stanford Village about eight hours after she was born.

The couple adopted Paul a few days after his birth on Nov. 10, 1964. Agency protocol of the 1960s required a baby to be placed in a matched-heritage family. The Likinses privately adopted Paul, whose birth mother was Mexican-American and birth father was Hispanic with German heritage.

Four-month-old Krista became part of the family in 1968 after Pat spotted her on a television show featuring children deemed unadoptable. Krista's birth mother was white and her birth father was French and African.

John, born in October 1968, joined the family when he was 8 months old. His birth mother was white and his birth father black.

Likins says the book "is about what it takes to hold an American family together, to make it work."

She shouldered the heavy load but seldom showed the strain, Likins says. Pat was extremely organized, doing things such as cooking meals for the entire week on the weekends.

While Likins completed his degrees, Pat's education was deferred so she could earn an income. She eventually completed her degree in English in 1973 at Cal State Northridge and became a teacher with six children in tow.

There were music lessons for all. Krista played softball and soccer. John was a naturally gifted wrestler. Likins coached John and Paul's football teams and started a wrestling program at the Park Ridge Athletic Club while living in New Jersey.

For vacations, the family often packed into a Layton travel trailer hitched to the family van and accompanied Likins to technical and academic conferences. They visited national parks and camped along the way.

Among the kids' favorite activities growing up was listening to their dad make up stories about Hans, says Lora. The game began "Who invented ____?" and Likins spun a colorful yarn about a fictional Hans invention. Apparently Hans invented the bicycle when two unicycles crashed and became tangled.

Of course, there was teasing and sibling mischief, such as stuffing John into a cat carrier.

With the family's happy times came heartache, too.

Cold stares and "tsk-tsks" steeped in racial prejudice often greeted Pat when she took her multiracial brood to the grocery store.

A well-regarded preschool warmly welcomed Pat, but suddenly didn't have any open spots upon meeting Krista.

Paul's behavior at 18 stretched Likins' patience and he finally asked the question, "Is Paul gay?"

Likins says the resulting conversation was five years overdue, much later than a more worldly father would have initiated.

Likins says he regrets his ignorance and not being able to help his adolescent son deal with the complexities of his sexual identity.

Drug addiction and mental illness had a profound impact on the family. John, who began using alcohol and other drugs at 17, went through cycles of addiction, recovery and relapse. He was eventually diagnosed with schizophrenia.

A low point found Likins driving the streets of Riverside, Calif., searching for his ill son, who desperately needed help.

In 2002, John had successfully completed some classes at Pima Community College and moved into his own apartment. He died in bed from a lethal mixture of prescription and street drugs. He was 33.

Several branches of the Likins' family tree are bent and overlapping.

Teresa, who had not made the move to Pennsylvania when Likins became president of Lehigh University, gave birth in 1988 to a son. The family never met the baby's father.

Pat encouraged Teresa to bring the baby to the family home so all of the Likins women could share in raising the baby. Eventually, Teresa and Lora decided to switch roles - Lora became Tommy's adoptive mother and Teresa his aunt.

John, at 17, conceived a child with a classmate. He and his daughter's birth mother allowed the baby to be adopted.

Krista, who struggled with and overcame her own drug demons, had two children - Christian and Carly, who were adopted by Likins' niece Jennifer and her husband, Mike Swanson.

Likins' account of the unconventional Likins family is a deeply personal story, yet he says these issues reflect the complexities of contemporary life for the American family. Their family story is a story of the American experience, Likins says.

He believes the 21st-century American family will resemble his. Demographic data supports his notion.

"One in seven new marriages is between spouses of different races or ethnicities, according to data from 2008 and 2009 that was analyzed by the Pew Research Center," the New York Times reported in January.

In addition, multiracial and multiethnic Americans are one of the country's fastest-growing demographic groups, the Times reported. That trend is expected to continue or accelerate.

America can continue to be a nation whose greatness is rooted in family values, Likins says, if a more inclusive concept of family is embraced and celebrated.

Likins says he and Pat were not trying to change the nation, promote diversity or be trendsetters. They were only trying to create a beautiful family.

"Each of these children needed a family and we did, too."

Peter Likins selected these excerpts from "A New American Family: A Love Story" (University of Arizona Press) for Star readers.

Dedication: To the heroine of our story, the love of my life, my wife and the mother of our children, Patricia Likins.

"If I had been a dreamer as a child, I would have dreamed the wrong dreams. … I didn't know that the beautiful stranger I boldly asked for a dance at my junior high school graduation party would become my life's partner, my best friend, and my accomplice in all of life's adventures. I was still thirteen; how was I to know? If Pat and I had not met in 1950 and married in 1955 at age nineteen, we would surely have missed the greatest adventure of our lives together: creating our multiracial family with six adopted children."

"Pat was at home one afternoon in 1968, sick with the measles and watching a movie on television. The host of the show, Ben Hunter, dedicated fifteen minutes between films to 'Adoption Interviews,' introducing to his audience children then thought to be 'unadoptable' because of race, age, or infirmity. Ben Hunter was breaking through the barriers of prejudice that excluded entire categories of children from adoption, believing that these barriers would fall if potential parents could see these children as individuals. He hoped that somewhere in his television audience each one of his vulnerable guests would touch someone's heart.

"Pat fell in love at first sight with a four-month-old African American baby girl (actually of mixed black/white lineage). When Pat told me about this child, she may as well have said, 'I'm pregnant.' Another child was about to join our family."

"Pat has a special kind of courage. The spotlight was not focused on her as it was on me, but in many ways she is the more courageous. She didn't falter when a doctor told her to reject for adoption the infant with a congenital heart defect. She didn't hesitate to adopt a black child who needed a family, or a second black child, or a Mexican American child, or two Indian children who brought with them the scars of seven to ten years of difficult and chaotic life. In every one of these instances, and in many more, Pat was the courageous initiator and I followed her lead, fully supportive but not the primary force."

Contact the Star copy editor and reporter Ann Brown at 573-4170 or abrown@azstarnet.com

Peter and Patricia Likins, both 18, at their engagement in 1954.

Peter and Pat Likins at her 75th birthday last month.

Pat Likins, who received her bachelor's degree from Cal State Northridge in 1973, is surrounded by Paul, left, Lora, John, Krista, Linda and Teresa.