Read Today's E-Edition
Share This
Librarian reinvents herself with a dash of new tech, a flash of Harry Potter
Share this
1 of 2 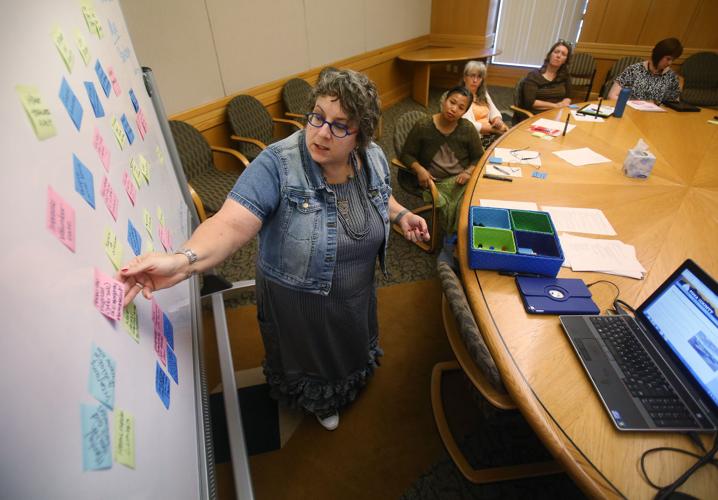 Pima County social media librarian Lisa Waite Bunker introduces a group of county workers to social media platforms for use in their respective departments. The sticky notes are participants’ desires for their department’s social media presence. 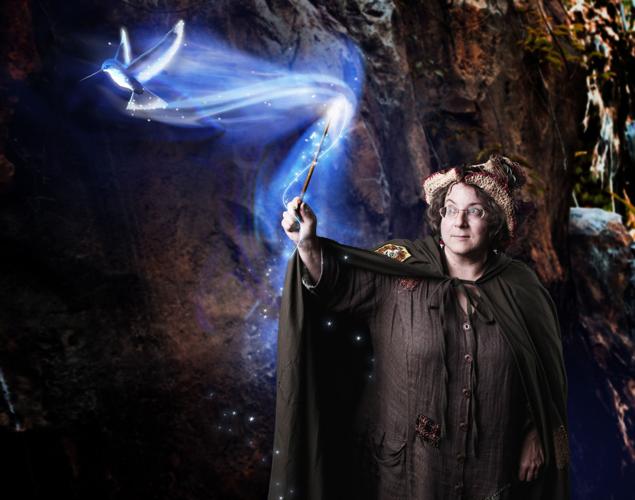 Lisa Waite Bunker does a spot-on Professor Pomona Sprout, casting a Patronus of a hummingbird.

Lisa Waite Bunker, a social media librarian for Pima County Public Library, owes much of her tech-savvy to a bit of magic.

In fact, you might even call Harry Potter her teacher.

Bunker, a devoted fan of the fantasy book series, had a growing interest in hand coding and graphic design when she discovered the online community of Potter fans.

In a “fandom” with a heavy teen presence, Bunker, now 55, watched “younger people online who were making it up as they went along,” she says. “They would do anything that would delight the fandom. They were willing to experiment, and it taught me to be somewhat fearless with trying new technologies.”

A librarian (and double for Hufflepuff’s Professor Pomona Sprout), Bunker finds that spirit of exploration handy, as her workplace grapples with the role of the library in a modern community.

No longer just a place to find books, discs or magazines, the library now deals online and in person, positioning itself as a gathering place for community creativity.

“When I think of libraries, you know, I have somewhat the same reaction as when I go into Home Depot or Michaels,” she says. “It’s walking into a place that is full of possibilities, and to some extent the possibilities are what is changing.”

Rather than just offer physical media to consume, the library can increasingly drive innovation by hosting community forums or teaching professional skills, she says.

“We will always have books,” she adds. “I don’t care what they say ... I’m sorry, they are not going away. But some of the things that we are doing are really exciting.”

Bunker believes the digital age can be a golden one for libraries — and if she has anything to say about it, it will be.

So, what exactly is a social media librarian?

Bunker primarily runs the Idea+Space and main library system Facebook accounts, while overseeing pages for other branches and programs such as the Seed Library and Bookbike.

The library also has a handful of Twitter handles and a presence on social media sites such as Pinterest, LinkedIn and Instagram. Bunker’s is the library’s prominent voice.

“You see her on those accounts,” says Jen Maney, a library service manager and Bunker’s boss. “One of her big training points for everyone doing social media for the library is using your own voice. If you show interest, you’re bound to trigger interest.”

“We have freedom to create community and that may mean posting things just because they are funny, or posting things just because they are beautiful, or because you know people who love books would love seeing it,” she says. “There are an increasing number of cardholders who don’t come into our buildings anymore ... and we need to figure out how to have warm relationships with them the way we do at the desk.”

Bunker also runs the library’s monthly Catalyst Café, which she started after attending South by Southwest’s Interactive technology conference several years ago. As a way to inspire would-be entrepreneurs, nonprofits and even neighborhoods, Catalyst Café recruits local speakers to talk about technology and business. Think, Pinterest, crowdfunding and freelancing, for example.

“She saw that startup companies and entrepreneurs and makers needed some venues and guidance that they couldn’t find elsewhere, and the library was the perfect place to do that,” says Lupita Chavez, a friend of Bunker’s and a library technical associate supervisor at the Wheeler Taft Abbett Sr. Library.

The Joel D. Valdez Main Library hosts the workshops in its Idea+Space, a meeting room created to be a hub for businesses, job-seekers and nonprofits. Bunker helped the library win a $65,000 grant funded by the Institute of Museum and Library Services for the space, which opened in October.

“Lisa is one of those connectors ...” Maney says. “She sees how to put people together in a way that will make us all stronger.”

What’s with this Harry Potter thing?

When the first “Harry Potter” book came out, Bunker was working as a library assistant at Sunrise Drive Elementary School.

“I had been in libraries a long time, and I had never had my desk at the library three-deep with boys,” she says. “It was amazing and kind of breathtaking for a librarian to see a book that had that kind of power for kids.”

About 2004, she discovered another enchanting world — online fan communities.

The main activity at the time was speculating about how the series would end for Harry and friends and, with a master’s degree in library science from the University of Arizona, Bunker was well-equipped to decode clues scattered throughout the other books. Unlike the teen fans who only knew to Google search, she could look up iconography, find runes in an encyclopedia or research name etymology. She also found a niche indexing J.K. Rowling interviews online by character and theme, drawing the attention of major fan sites.

In Tucson, she pulled together Potter-themed parties at the libraries, organizing a costumed cast and inviting library-goers to spend a day at Hogwarts.

“The idea was to make it as immersive as possible and really create something where they weren’t just coming to listen to music, but they had venues of being creative themselves,” she says of the events, which often corresponded with a Tucson show by the band Harry and the Potters. “We had a real quill and paper and ink so kids could us a real quill, and Snape went around handing out detention notices for goofy infractions. It was just wonderful, geeky fun.”

Bunker also worked with three other Potter devotees to put together a print version of the online fan encyclopedia, “The Harry Potter Lexicon.”

“I’m in my own library catalog, which is a kick,” she says of “The Lexicon: An Unauthorized Guide to Harry Potter Fiction and Related Materials.”

But it wasn’t all magic.

In 2007, Rowling and Warner Bros. filed a lawsuit against the small, Michigan-based publisher of the encyclopedia, citing copyright infringement. The publisher lost the case, but Steve Vander Ark, the book’s primary writer, was able to change the book to meet the court’s fair use requirements.

But the deed was done — the Harry Potter fandom expelled Bunker and the others from their community. She suddenly had more time on her hands.

“When the library said, ‘We have these social media accounts, but we’re not using them to the best extent we can,” Bunker, who was working full-time for the county system and “on loan” to the Tucson Museum of Art, decided to try her wand at it.

“At our age, people have become settled in what they’re doing,” says Brenda Huettner, a technical communicator and owner of consulting company P-N Designs Inc. “Lisa is excited and enthusiastic that there is a new process and technique and tool and gadget. She is right out there trying to understand and see how it can be useful to the community.”

What about spare time?

Bunker’s rose garden — with about 45 varieties of roses, some historic — is where she gets away from the digital world. Life as a social media librarian means she never fully escapes. Notifications silently stack up on her phone, vying for her attention.

“My husband likes me to talk to him, and my dog likes walks,” she says, laughing about her work-life blend.

People skills matter to her. She didn’t go into technology to get away from people, but rather to engage and inspire them.

Randy Hays, a jeweler, has known Bunker since their days at Sam Hughes Elementary. More recently, she encouraged him to do an exhibition at Xerocraft Hackerspace and get involved with Startup Tucson. Now he sells his Celtic and Gothic-style rings through an Etsy store online.

“She is one of those people that can’t help but instigate things and push people toward things that they are probably going to love to do,” Hays says.

During the library’s days of Harry Potter parties, Bunker took on many roles — Rita Skeeter, Dolores Umbridge and Molly Weasley. But as a host of annual garden parties, it was the Hogwarts herbology professor Pomona Sprout that stuck.

“She dressed up and was dead-on perfect ...” says Thania Mayorga-Shull, a former library employee who now works for Make Way For Books. “She definitely has a green thumb and magical ability to make all these roses bloom ... and she has a magical way of making things grow and bloom in the library world, too.”

Librarians enjoy being geeky, too

Passion for children and books led to new career.

Starting a new life in a new country at the library

After starting her life over, she saw herself in patrons who needed the most support.

Coordinators of BICAS and Cyclovia are two spokes on a wheel.

Coordinators of BICAS and Cyclovia are two spokes on a wheel.

Love Letters to My Library highlights the gem that is Pima County Public Library.

Pima County social media librarian Lisa Waite Bunker introduces a group of county workers to social media platforms for use in their respective departments. The sticky notes are participants’ desires for their department’s social media presence.

Lisa Waite Bunker does a spot-on Professor Pomona Sprout, casting a Patronus of a hummingbird.