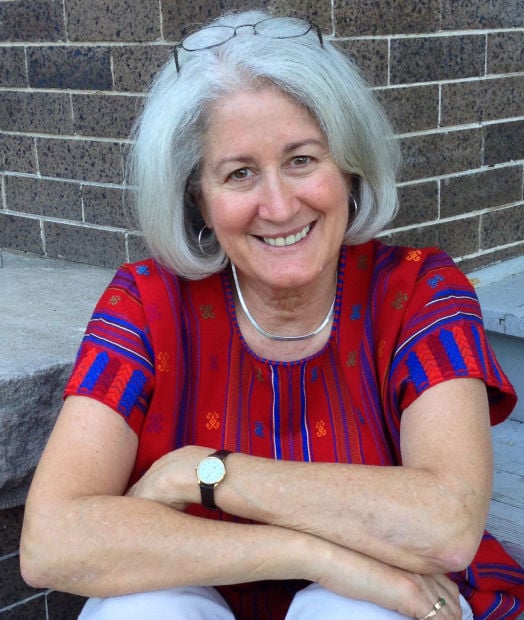 Cathy Moser Marlett, author of “Shells on a Desert Shore: Mollusks in the Seri World.” — Credit: University of Arizona Press 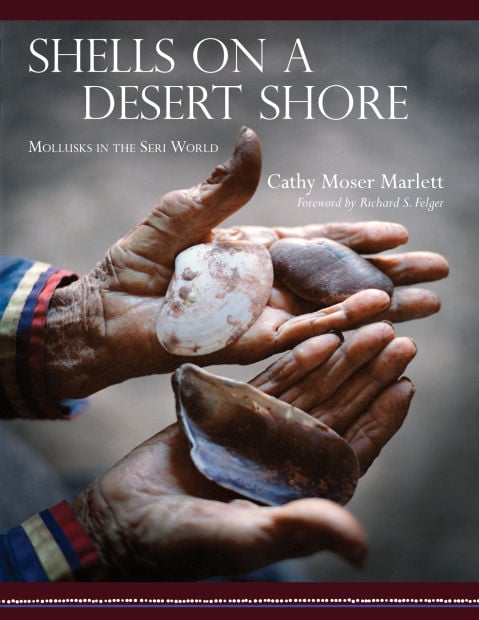 Cathy Moser Marlett’s interest in art and biology led to “Shells on a Desert Shore: Mollusks in the Seri World,” published by UA Press.

Cathy Moser Marlett spent her childhood darting barefoot up and down Mexican beaches, catching clams or octopuses stranded on the shore at low tide.

Starting in 1951, her parents, Edward and Mary “Becky” Moser, worked as field linguists with the indigenous Seri people in the western Sonoran Desert along the Gulf of California. There, working with faith-based SIL International, the Mosers were the first to write down the Seri language and establish an alphabet. Eventually, they translated the New Testament into Seri.

The family made their home in the village of El Desemboque, several hours north of Kino Bay on the northern Sea of Cortez.

Today Marlett, an only child, and her husband, Steve Marlett, build upon her parents’ work.

During her research for “Shells on a Desert Shore: Mollusks in the Seri World,” Marlett, now 61 and an illustrator of literacy projects for SIL International, sat down with childhood playmates who today have grandchildren, speaking in the Seri language she learned as a child.

Her 300-plus page book, published in May by the University of Arizona Press, contains more than 100 of her drawings of the region’s mollusks. As Marlett presents her research, she also includes personal anecdotes.

“These people have lived there for several thousand years and intimately know the sea and desert,” Marlett said by phone recently. “The mollusks are kind of another aspect of the Seri culture. The reason it (the book) is mollusks is that I spent hours on the beach as a child. I got to know the intertidal zone, and I loved the shells.”

Not only did mollusks provide easy food for the Gulf peoples at low tide, but their shells also doubled as utensils and containers. The blend of scientific documentation and personal recollection in the book highlights a cultural lifestyle and language. Today, less than a thousand people speak Seri, making it an endangered language.

Marlett plans to compile a separate work for the Seri community to give younger generations a tangible account of their culture. It will include her drawings along with the scientific and Seri names of the mollusks. She does not plan to publish this work.

“I don’t want them to feel like I’m taking something out of their culture and keeping it for myself and showing the world, and they’re not involved,” Marlett said. “This is their story. This is not my story.”

Growing up as an only child, Marlett entertained herself by reading, drawing and striking up conversations with the researchers that passed through her home.

The collection of illustrations in “Shells on a Desert Shore” reflects Marlett’s love of art and science, a passion cultivated when bush pilot Ike Russell and his wife, Jean, whisked Marlett to Tucson for several days as a kid. On that visit, she met with University of Arizona professors who encouraged her to draw the world she saw.

“My parents got me a microscope, and I’d sit at the kitchen table and draw things I saw in the microscope,” Marlett said. “Art and biology have always been a combination for me.”

Marlett contributed about 600 illustrations to two editions of a Seri dictionary developed by her husband and mother in 2005 and 2010. Her mother died last year at the age of 88. Her father died in 1976.

The research for her own book has taken her a couple of decades, interspersed with the rest of her life. Throughout the years, Marlett and her husband, a Seri linguist, have made trips from their home in Tucson to the village of her childhood. When their two sons were children, they would cart the family south of the border during school breaks.

The house she lived in with her parents still stands. She says it is the second oldest house in the fishing village, though it is falling in today. They no longer stay there on visits or camp in tents. These days, they take a trailer.

“It’s a wonderful place to grow up, walking the shore barefoot,” Marlett said. “It was an idyllic childhood in a sense.”

"Shells on a Desert Shore: Mollusks in the Seri World," by Cathy Moser Marlett published by the University of Arizona Press ($75). Available at uapress.arizona.edu

Excerpts from "Shells on a Desert Shore"

"My friends learned of my interest in shells and often found unusual ones to show me. It only later occurred to me that the Seri people had unique information about the sea and its creatures, and it just might be important to record it. And so what started as a short list of shell names grew to illuminate a fascinating world that was without a doubt quickly disappearing. It soon became obvious that such information from a people with a viable language and vibrant culture could provide a unique glimpse into the lives of those who for millennia inhabited the shores of the Gulf of California and whose stories exist only in the silence of their empty desert camps." Preface, p. XVIII

"In a remote desert camp a seashell lies where it was dropped long ago, perhaps marked by evidence revealing how it was used and who might have left it there—that shell’s narrative is repeated throughout the desert and on the extensive dunes that line the Gulf of California and some of its islands. And more than an eloquent reminder of the people who have long walked these shores, the depth and density of the shell deposits clearly speak of the richness of the Gulf’s waters and the importance of mollusks in the lives of these people." Introduction, p.5

"The Seris’ profound relationship with the natural world is expressed through a rich oral tradition that includes not only simple observations, names, and classification, but folklore, songs, and historical accounts as well. Considering that this group at one time consisted of fewer than two hundred people, no doubt many of them children, one can only be amazed at the wealth of information orally transmitted by these few individuals. And yet, at the same time I realize how much has been lost." Introduction, p. 6

"Names make the commonplace personal, perhaps transforming the ordinary into something whimsical to be chuckled over or important enough to be remembered. Such names as ‘what the beggar pounds in the sea’, ‘the firewood my younger sister gathered’, ‘necklace of the dark place’, ‘old woman’s toenail’, and ‘what the sea turtle tattooed’ give a narrative to shells that one comes upon tossed up on a beach or lying in a remote desert camp. One can almost hear them being talked about and used." Names and Naming, p. 25

"The name halít cahooxp ‘what causes white hair’ comes from the idea that eating too many of the clams will turn one’s hair white. However, Francisco Morales laughed as he related how the clam’s name and corresponding belief began: an old man eating the clams informed some young people sitting nearby that eating the meat would turn their hair white—because he wanted to eat the clams himself." Dosinia ponderosa, p. 120.

"An early gesture of Seri hospitality is recorded in the voyage account of a vessel exploring the northern Gulf, made by a Jesuit missionary, Juan de Ugarte, in the summer of 1721. He was accompanied by William Stratford, an English shipwright. Their return journey southward brought them a second time to Tecomate, on the north shore of Isla Tiburón. With their crew suffering from scurvy and Ugarte from severe rheumatism, they found themselves welcomed by the Seris and given food and water. Ugarte wrote that “todas las mujeres y niñas fueron a la playa y vinieron cargadas de unas almejillas delicadas” [all the women and girls went to the beach and brought back some delicious little clams]—no doubt the abundant haxöl found on that shore. Leukoma grata, p. 122

"Zaah ‘sun’, an older name unrecognized by most people, was said to have been given because of the sun’s bright reflection on the shell’s varnished, brownish-orange surface when fresh from the sea. Victoria Astorga provided the name, having saved some of the shells after the clams’ meat had been eaten. She thought that the shell and its name would be new to me, so she seemed rather delighted to be able to surprise me. As she talked with me about the shells, she kept using one of them to scrape off the other’s varnished brown periostracum, in order to “clean” it. I’m glad I refrained from asking her to stop. Those scratched-up shells are a much more poignant reminder of the day she introduced them to me than they would otherwise be, lying pristine in a collection." Megapitaria aurantiaca, p. 124

"As Eva López described, the shell was used to 'listen to the ocean' when people were inland:

The Ancestors used these as 'telephones'—they kept them in their bags. If they were away in the desert and wanted to hear the sound of the ocean, they held them to their ears. If there were a lot of noise, the tide was incoming or high; if there were little sound, it was low tide." Neverita reclusiana, p. 143

"According to Cleotilde Morales, the bubble snail was 'just played with.' Children would flick the live snails at each other with thumb and finger, 'like shooting marbles,' and because the animal itself was sticky, the shells would adhere to their target." Bulla gouldiana, p. 168

"The suction cups were removed after cooking and could be strung into necklaces, often as an amulet for a child. Sometimes the child would chew and eat the dried suction cups directly from the necklace, or the suction cups could be rehydrated like the body meat. As one person quipped, 'Dried octopus was the Seri Maruchan [a dehydrated noodle soup]!'" Octopus, p. 184

Leona Claire Fuller kept journals from her days of dancing with the senior tap troupe ﻿The Hot Flashes.

SummerMania!: An Epidemic of Fun

A librarian-salesperson describes offerings that appeal to youths

Gall's 'Dog vs. Cat' a parable on learning to cooperate

If you've ever shared a bedroom, you can relate to Chris Gall’s new book “Dog vs. Cat.”

When Oro Valley native Jessica Hickam finished working as a production assistant on “Star Trek Into Darkness,” she had a “now what?” moment.

Cathy Moser Marlett, author of “Shells on a Desert Shore: Mollusks in the Seri World.” — Credit: University of Arizona Press

Cathy Moser Marlett’s interest in art and biology led to “Shells on a Desert Shore: Mollusks in the Seri World,” published by UA Press.