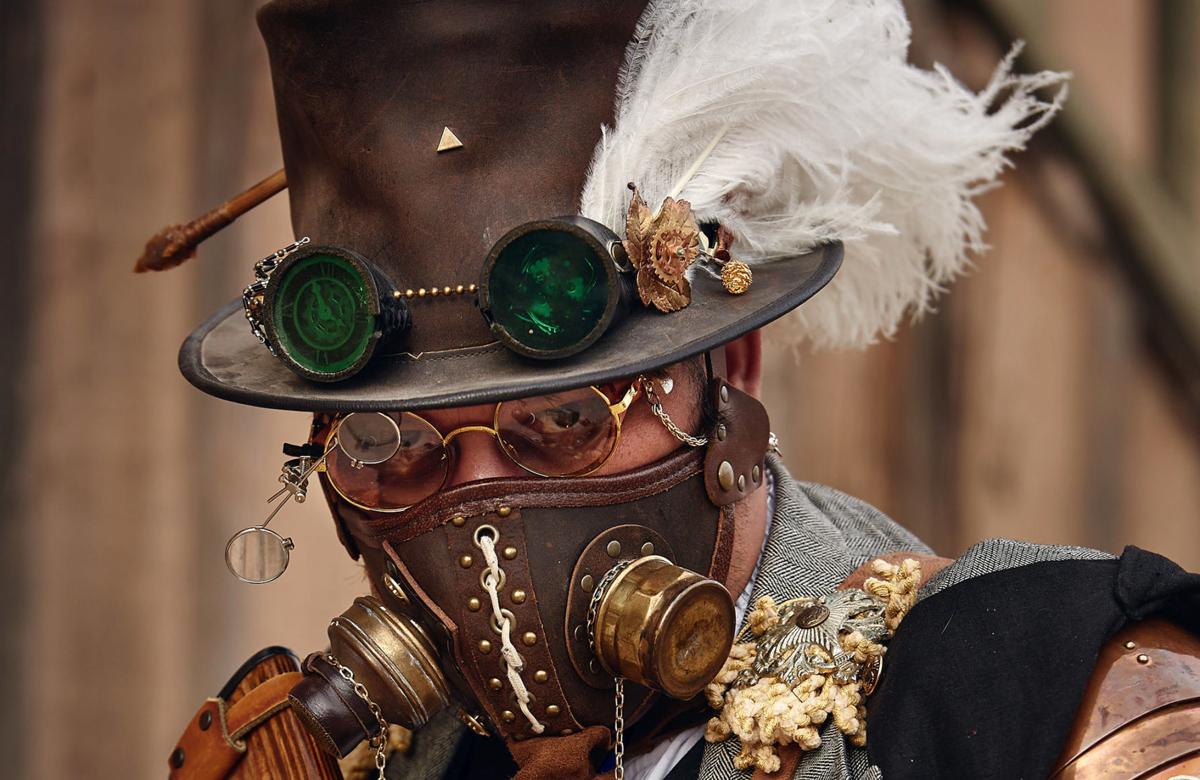 The 2020 Wild Wild West Steampunk Convention is coming to Old Tucson this weekend. 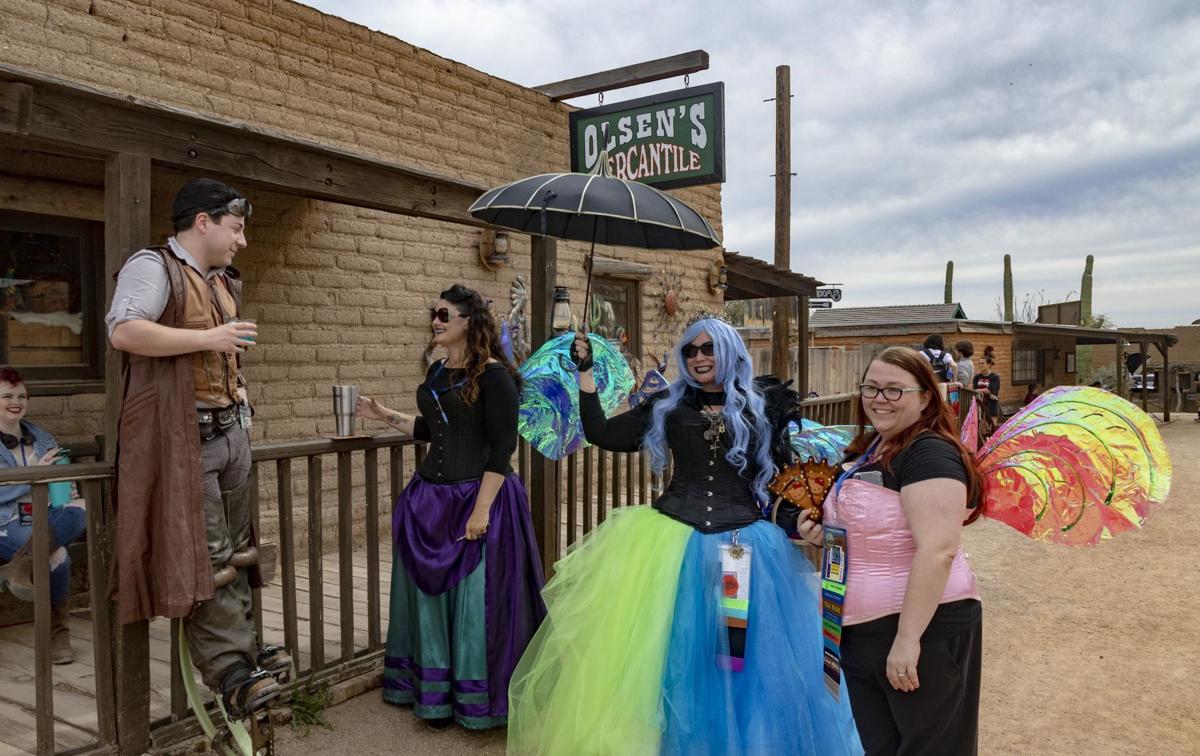 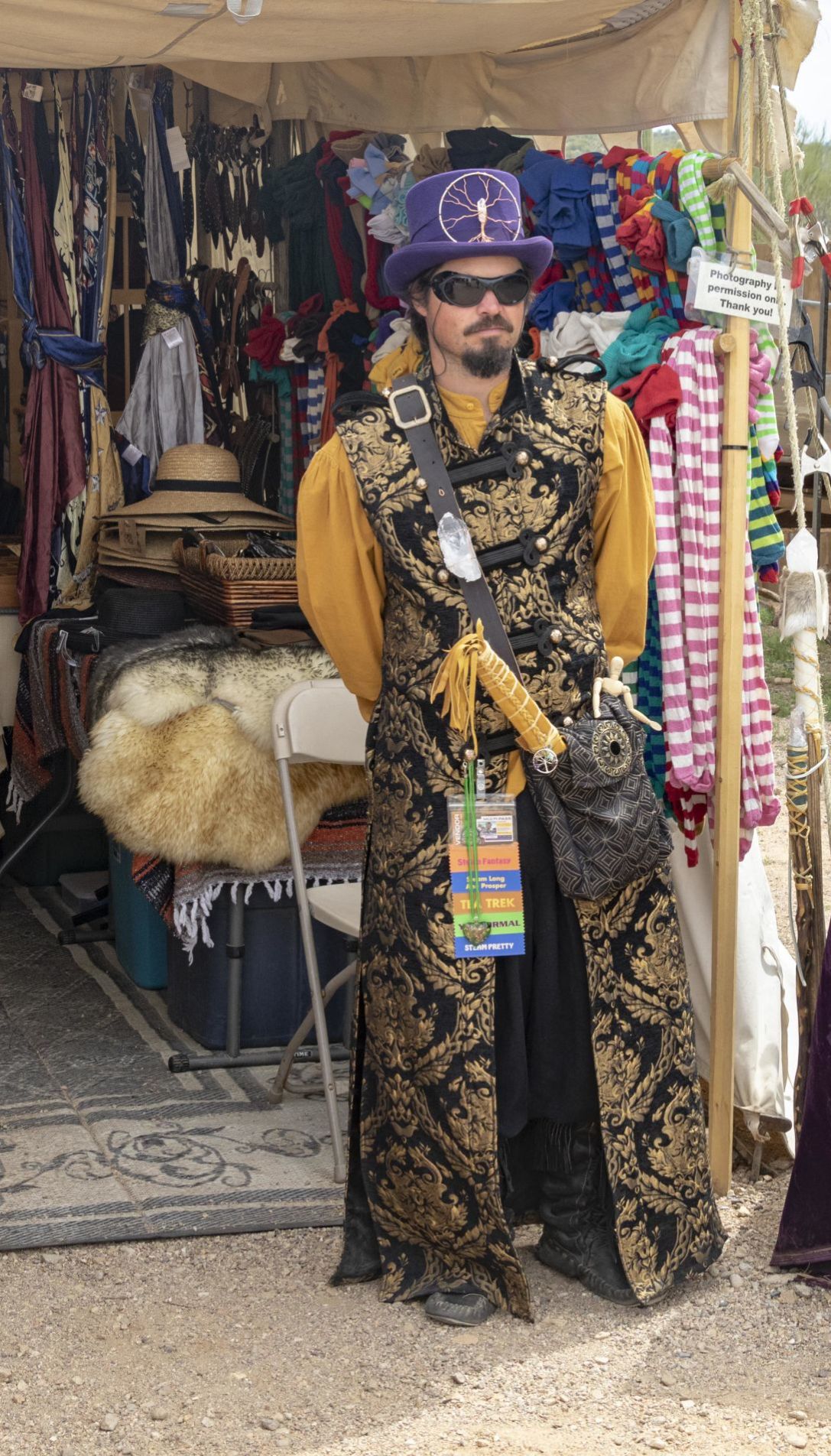 Steampunk is a science fiction subgenre that combines Old West and Victorian history and culture with fantastical steam-powered technology. 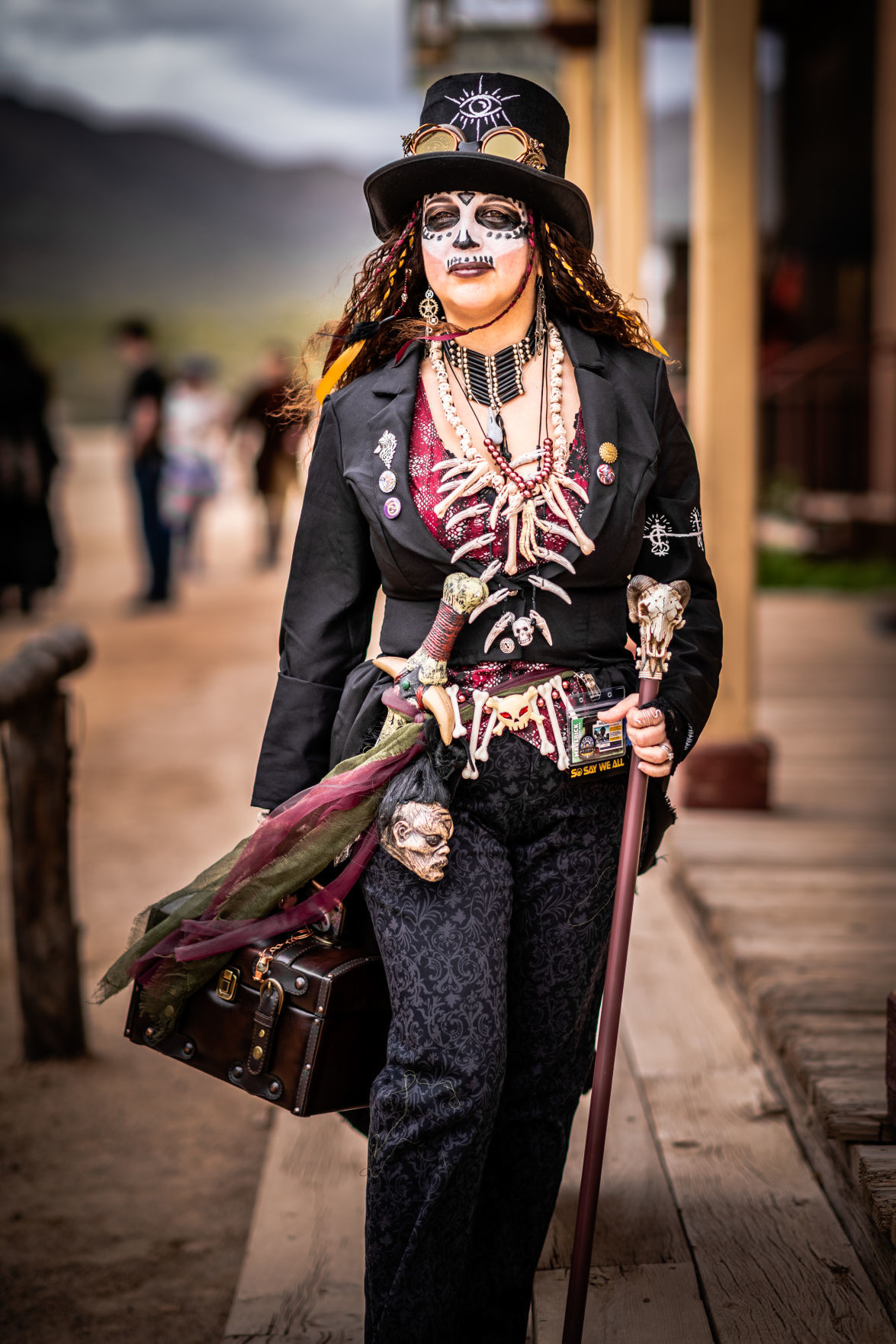 Thousands are expected to attend the Wild Wild West Steampunk Convention at Old Tucson, some from as far away as Germany and New Zealand, to share their affection for steampunk. 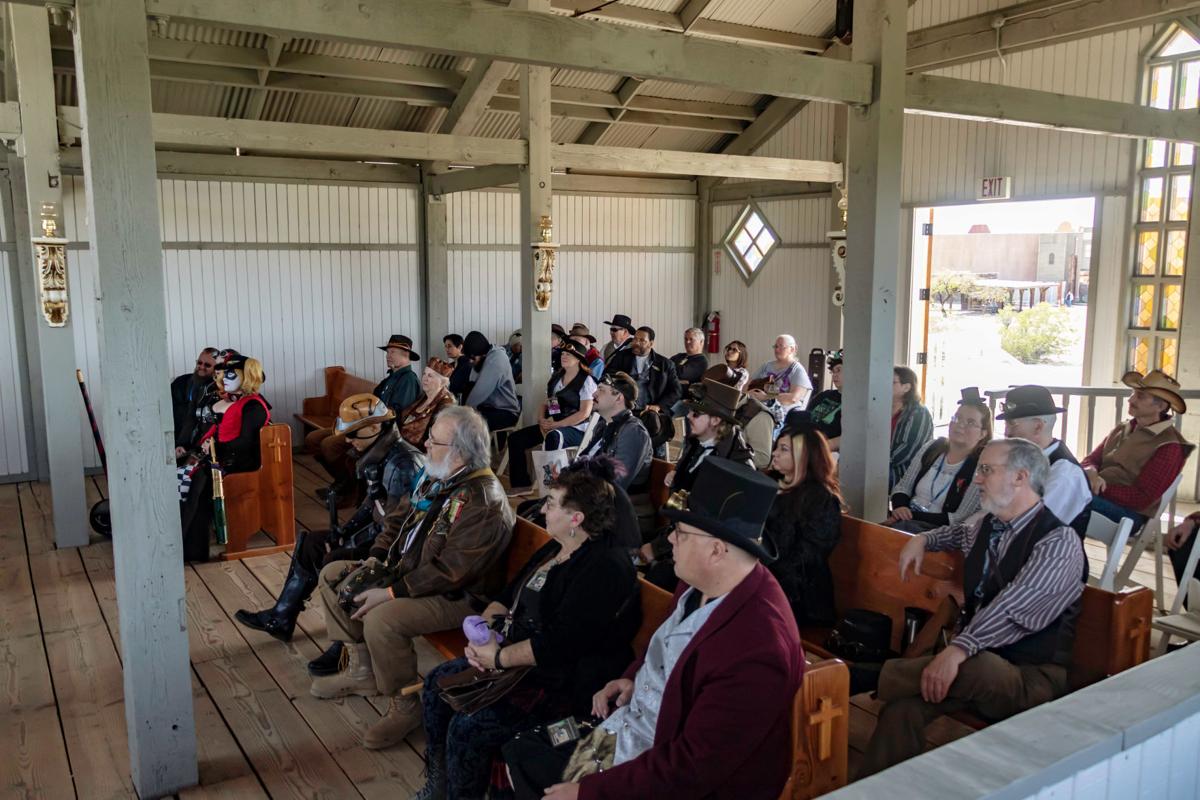 The gunslinging and saloon dancing at Old Tucson might look a little more anachronistic this weekend as the ninth annual Wild Wild West Steampunk Convention gets underway.

Thousands are expected to visit the longtime theme park for the event, some from as far away as Germany and New Zealand, to share their affection for steampunk, the science fiction subgenre that combines Old West and Victorian history and culture with futuristic steam-powered technology.

Jason Drotman, owner of the convention, said the con has gone from a couple hundred attendees when it first started to one of the largest events of its kind in the country.

“There is no other place quite like Old Tucson, nothing as grand or historic, to host an event like this,” Drotman said. “People love the feel of it all.”

The idea for the steampunk convention initially emerged from meetings held by the Arizona Steampunk Society in Phoenix more than a decade ago. Drotman, who was at those original meetings and still lives in Phoenix, said the majority of his team now resides in Tucson, as do many of the attendees.

Up to that point, Sparrold had not given steampunk much thought. A friend invited her to the convention.

She considered herself more of a Victorian goth girl; a regular attendee of goth-friendly clubs in Tucson, such as Fineline on West Drachman Street and Club Asylum on East Congress.

Sparrold, who works as a middle school teacher and has served in several positions with Wild Wild West Con, was immediately smitten with what the steampunk convention had to offer.

“It was a natural transition for me,” she said.

Sparrold said one of the major draws was the costume play. Sparrold tries to dress as a different original character each year. Last year, she carried a black umbrella, wore iridescent wings and a light blue and green skirt and called herself the Fairy Goth-mother.

“I roamed the park giving sometimes sunny, but snarky pieces of advice,” she said. “A lot of the people who attend the convention have the fact that they are makers in common. That provides a significant bond.”

Sparrold said it took her some time to transition from the all-black goth aesthetic, but these days, she enjoys a little bit of color in her wardrobe.

“I’m still drawn to the monochromatic look, but sometimes pink can be fun,” she said.

Sparrold said the steampunk community is a tight community. She considers many of the attendees of Wild Wild West Con friends for life.

“The convention is a really great place to meet with people who have a lot of these same interests,” Sparrold said. “We have this philosophy that we are fun, we are entertaining, we are weird. Everyone should come join us.”

Thinking about attending this year’s Wild Wild West Con? Here is what you can expect:

It doesn’t take long at the Wild Wild West convention to realize that the steampunk community is a creative community.

Many of the participants will be decked out in elaborate Victorian and Western garb with steampunk elements attached — things like fanciful goggles and wild, steam-powered weaponry.

“People take it to an extreme level,” Drotman said. “We have participants coming in whose full-time jobs consist of making steampunk props, equipment and gear.”

Drotman said you don’t need to be an expert costume designer to attend the event.

“We have people who spend 200 hours on incredibly elaborate costumes and others who assemble something from items they pick up at Savers,” he said. “All levels are welcome.”

Not feeling your costume? Attend a workshop or two to up your game for next year. Wild Wild West Con will teach you how to create a wide array of steampunk-inspired attire and accessories, including “steamy” hair clips, steampunk nail art, top hats, ear cuffs and eye patches.

Several of the buildings at Old Tucson during Wild Wild West, including the chapel and the courthouse, will be transformed into classrooms for a wide range of panels to be held throughout the weekend.

Like any good convention, be it for comics, gaming or steampunk, the panels are designed to be both creative and informative.

There will be discussions about Victorian spiritualism, the art of robbing a bank in the Old West, prop-building, and one called “The Pinkertons, The World’s First Private Detective Agency.”

The convention is going all out in the music department this year, flying the neo-steampunk metal band Poison Garden all the way from Italy for a concert on Saturday night. Led by Madame Anais Noir, the band delights with guitar-driven melodies and steampunk themes.

Poison Garden will be joined by the outfit known as Marquis of Vaudeville, a band known for its theatrical flair and originality.

5 rules from a pro

Arizona Opera brings 'Riders of the Purple Sage' back to Tucson

The piece, which Arizona Opera commissioned and world-premiered in 2017, set single ticket sales records in 2017, right behind 'Carmen,' 'La Bohème' and 'Madama Butterfly.'

It's wine festival season: It all starts in Elgin this weekend

Eighteen wineries are pouring their best vintages to celebrate the regional wine industry at Elgin festival, the first of several wine festivals throughout the state this spring.

The play looks at Tucson's Hispanic community and the Old Pueblo's rich culture.

The show, which culminates with a dance party, hones in on the power of family — chosen or otherwise.

Get out your grooviest gear for Tucson pup event, Woofstock

There will be contests for the most psychedelic dog and the best looking dog at the event, which doubles as an adopt-a-thon.

Also on Tucson stages this weekend: We'll see just how talented we are when 191 Toole hosts the finale of "Tucson's Got Talent."

A bit of chili powder and cumin, plus fresh chopped cilantro, remakes the classic French crepe batter into something more suited to Arizonan palates.

Freya Creech landed in Tucson in January 2019 and is already making a name for herself with everyone from Arizona Opera to True Concord Voices & Orchestra.

It's part theater, part concert, but Niyaz composer hopes in the end you will feel a sense of  peace and understanding for all humankind.

The comedian, known for his time on "The Daily Show," reportedly had an unforeseen scheduling conflict.

The 2020 Wild Wild West Steampunk Convention is coming to Old Tucson this weekend.

Steampunk is a science fiction subgenre that combines Old West and Victorian history and culture with fantastical steam-powered technology.

Thousands are expected to attend the Wild Wild West Steampunk Convention at Old Tucson, some from as far away as Germany and New Zealand, to share their affection for steampunk.