It’s a way to social-distance, relax and get fresh air and dinner all at the same time.

Really. Fishing folk don’t crowd together; instead, they stake their spot a good distance away from others and wait patiently for that catfish or bass to chomp on the line. If it’s big enough, it’s a meal.

“It’s more than fun,” says Mark Hart, public information officer for the Arizona Game and Fish Department. “It may be a coping strategy. … The longer people are isolating, the more they need to get out, and fishing is one of the safe ways to do that.”

Fredrick Barfield fishes about three times a week, and he says he has no trouble finding a lone spot at his go-to fishing hole, Silverbell Lake.

He doesn’t always catch a fish but it’s time well spent, he says.

Barfield heads to “the Bell,” as he calls the lake, with his five fishing poles (though he never uses more than two at a time, which is all Arizona Game and Fish allows), his punch bait (a cheese-based catfish bait), and his camping chair. Once he casts his line, he settles in his chair and sips on an energy drink, or maybe a Bud Light, while keeping a watchful eye for any movement on the line.

Barfield’s wife, Jennifer, and their three children often join him.

“I like being out by the water,” Jennifer says. “Even if I don’t catch one, I am OK. It’s nice and relaxing.”

For the desert, the Tucson area has a surprisingly generous number of places to fish. That’s particularly appealing to Helyann Fimbres, who took up the sport a few years ago.

“I always thought you had to go out of town to fish, but no,” she says. Still, her favorite place to cast a line is Parker Canyon Lake, about 80 miles south of Tucson. “You lose all cell reception,” she says. “The closest civilization is Elgin.”

We’re going to stick closer to home. Here’s a rundown of where to cast within 50 miles of this area. All but Rose Canyon have catfish, bass, trout, sunfish and amur swimming in their waters. Stocking won’t resume in the city lakes until mid-September, but fish are still swimming around. Rose Canyon is where you cast for rainbow trout. Rose Canyon stocking began in April and will continue monthly until the colder months hit the mountains.

The 13-acre lake provides plenty of secluded spots to set up your gear and try your luck. Properly licensed canoes up to 17 feet, and boats up to 14 feet are allowed, but no gasoline motors.

This is the lake that Fredrick Barfield a few years ago caught his biggest fish — a 15-pound catfish.

“It was summer, nothing going on, and then bam!” he recalls with relish.

The lake covers 10 acres and is as deep as 12 feet. Nonmotorized boats up to 14 feet and canoes up to 17 feet are allowed.

The fishing can be fruitful here. The “Brag Board” on the Arizona Fish and Game’s website pictures a proud Alex Martinez with an 11-pound, 9-ounce largemouth bass he snagged last year at Kennedy.

“The community of fishermen is friendly,” she says. “And there isn’t a lot of brush around the lake. There’s not a lot of shade in the summer, but that doesn’t bother my dad and I. We always get bites, and usually get fish.”

The 14-acre lake reaches a depth of 35 feet and offers a pristine view of the Catalina and Rincon mountains. Anglers have reported success with catching trout and catfish at the lake, which does not allow motorized boats, and limits canoes to 17 feet, and boats to 14 feet.

Keifer Gladwin likes Lakeside, but bemoans the lack of flatland around the lake.

“Good lake but the one thing that bothers me the most is that there’s not flat land to sit back and relax in front of your pole,” he says. “You basically sit on a decline and it takes a toll after a while on the back.”

This 10-acre lake, which dips to just 12 feet, is popular among Sahuarita residents who throw a line in and don’t wait too long to bring home supper.

It’s also a favorite of Fredrick Barfield, who fishes there when he can pull himself away from Silverbell Lake. “I love Sahuarita,” he says. “It’s pretty out there; a whole different atmosphere.”

He has caught mostly catfish at the lake, but bass, bluefish and trout have also bitten.

No motorized boats, canoes larger than 17 feet or boats beyond 14 feet.

Mount Lemmon, between mileposts 17 and 18 on the Catalina Highway

A crystal-clear lake, the smell of ponderosa pine trees, and tranquility galore are at this six-acre lake. Rainbow trout are what bite here and summer stocking has begun. No vessels are allowed on the lake.

Kathleen Allen has been a reporter in Tucson for more than 35 years.

Don’t dip a line in public waters unless you have your fishing license. It’s $37 annually for Arizona residents 10 and over. Licenses are $24 a year for the Arizona Game and Fish Department’s Community Fishing Program, which allows fishing at 46 lakes in the state, including Sahuarita, Lakeside, Kennedy and Silverbell lakes (Rose Canyon is not part of the program).

And here’s a bonus for those 70-plus who have lived in Arizona for 25 years or more: You are eligible for a Pioneer License — it’s a lifetime fishing license with no fee attached.

Fishing license applications and more information can be found at azgfd.com/fishing/community.

The daily catch limits for each person in lakes in the Community Fishing Program (Silverbell, Kennedy, Lakeside and Sahuarita) are four each of catfish and trout; two of bass, 10 sunfish and 1 amur.

Fish limits in waters outside the Community Fishing Program: Six each trout, walleye and bass; 10 each striped bass and catfish; unlimited on northern pike, crappie and sunfish.

No more than two poles allowed in the water at one time.

For full regulations, go to tucne.ws/fishingrules.

At all times, these rules of etiquette apply: Anglers should be careful not to crowd others; don’t move in on those who arrived earlier than you; and take out whatever you brought in.

And there are guidelines for those around anglers: Don’t throw rocks, feed ducks or otherwise disturb the waters in the area people are fishing. Give those fishing space and some quiet.

Each of the fallen service members will be honored in a special section of the Badgers' Hall of Champions.

This week's book recommendations from the Pima County Public Library are part of the #ReadBlack initiative, designed to further the conversation on black literature, history and culture.

Marilyn Heins: An open letter to my grandson on fear in the face of racism, disease

In the face of riots and a global health pandemic, fear can lead to positive change, Marilyn Heins tells her soon-to-be 8-year-old grandson.

Your bookshelf is a reflection of your interests, both past and present, Tucsonan says.

When theaters went dark in March, Tucson lost more than the chance to see plays and be entertained. 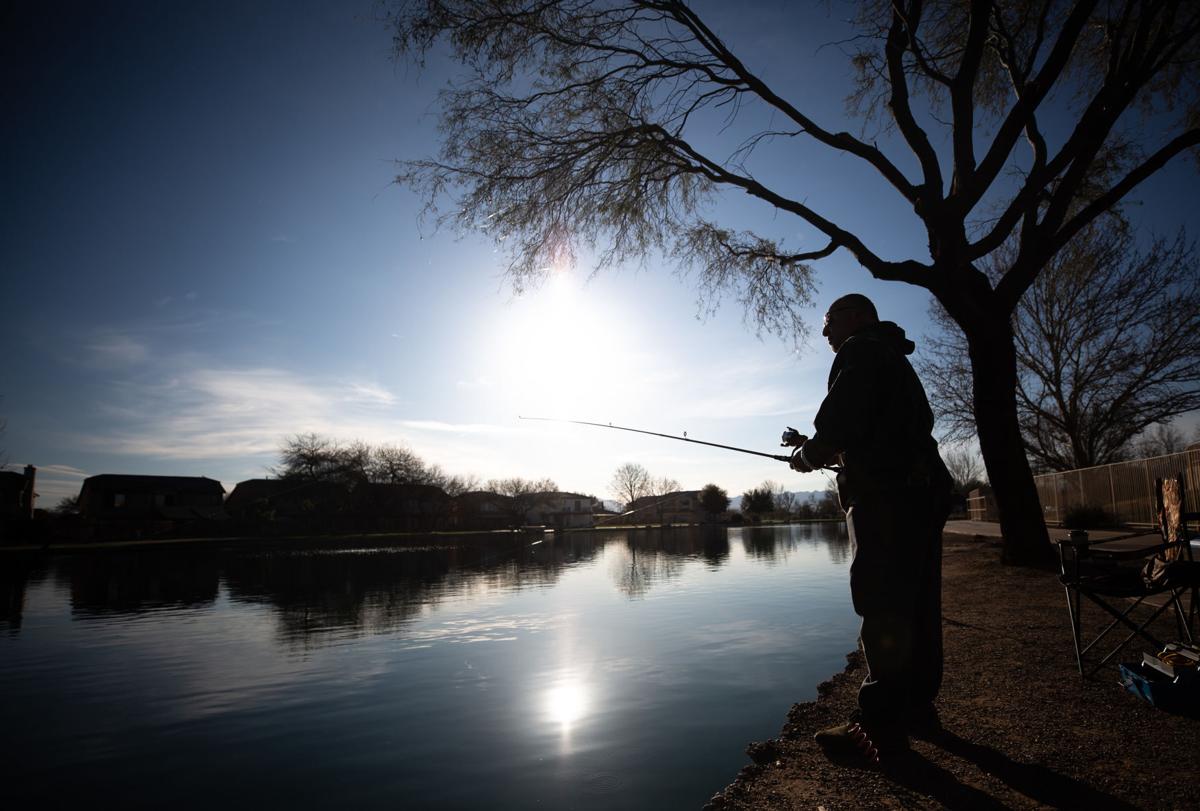 Ted Moreno reels in a line at Sahuarita Lake. The Tucsonan fishes for trout during the fall and winter months, generally splitting his fishing time between Sahuarita and Kennedy lakes. 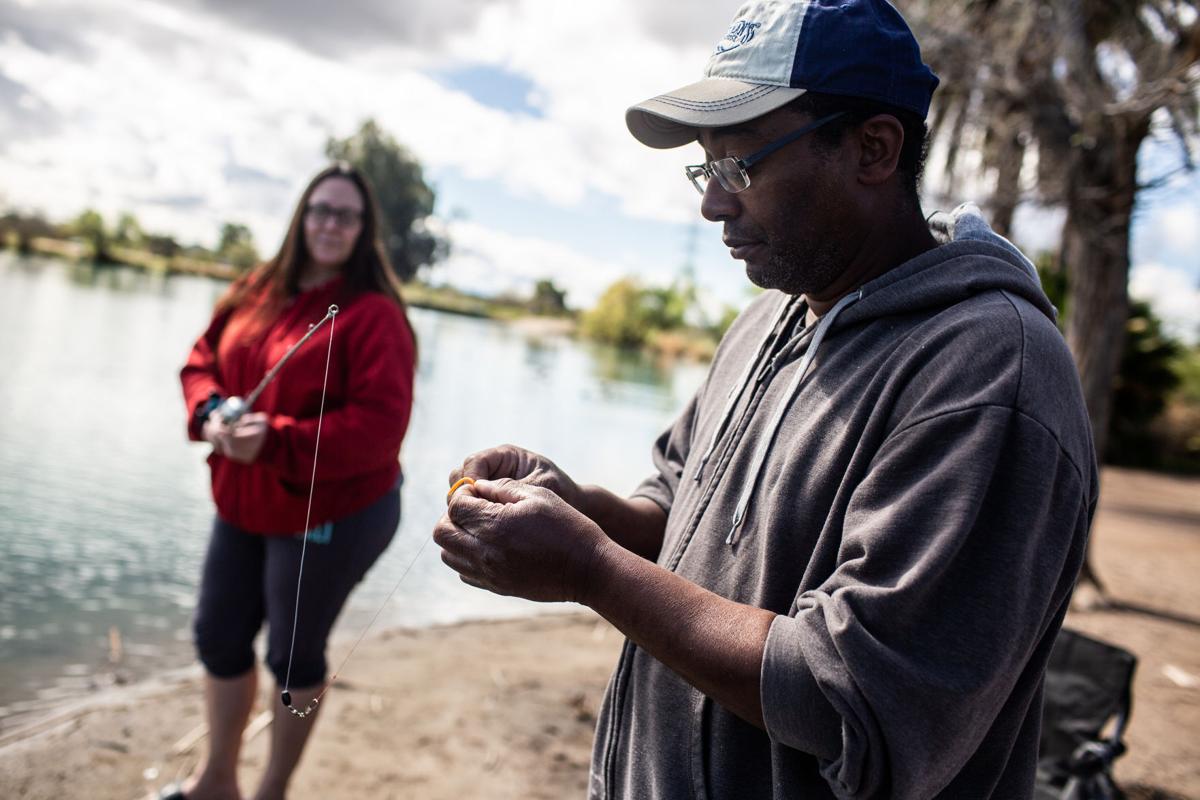 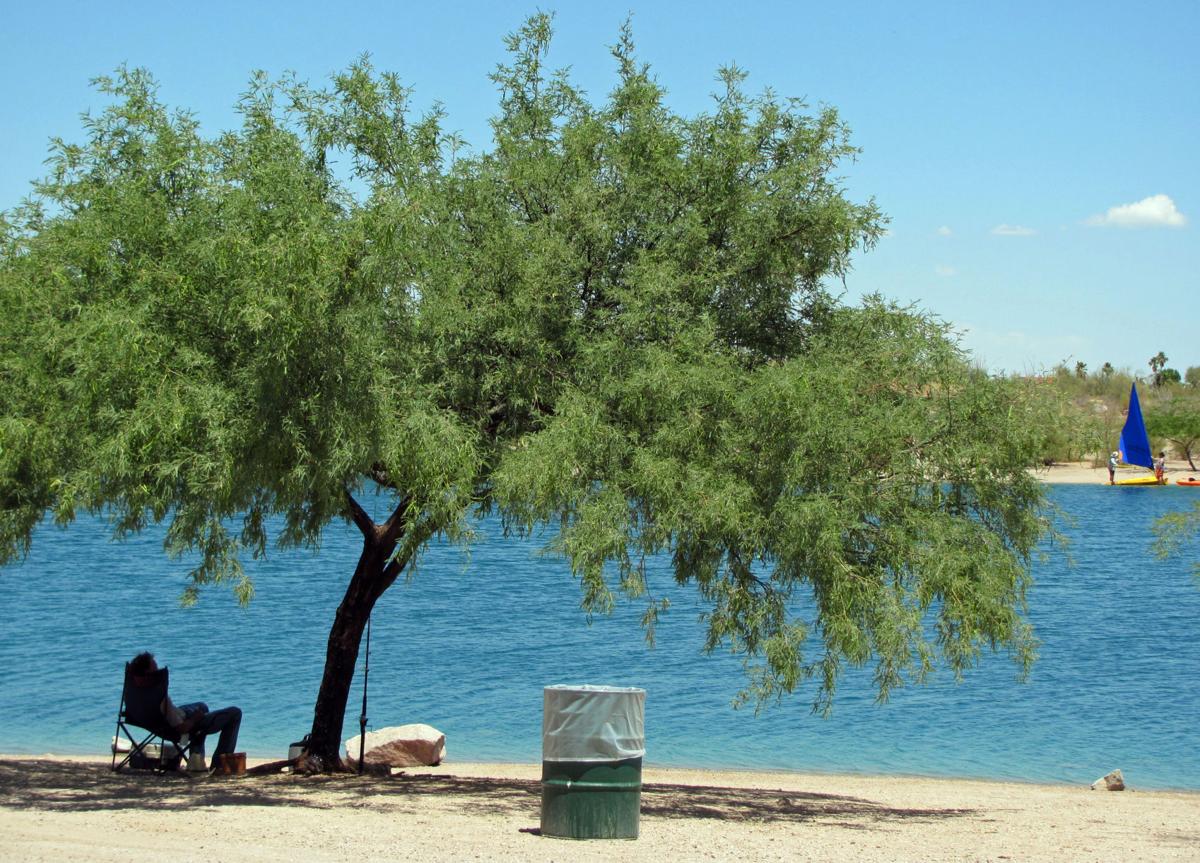 A lone angler relaxes under a shade tree alongside Kennedy Park Lake, where secluded spots are plentiful. 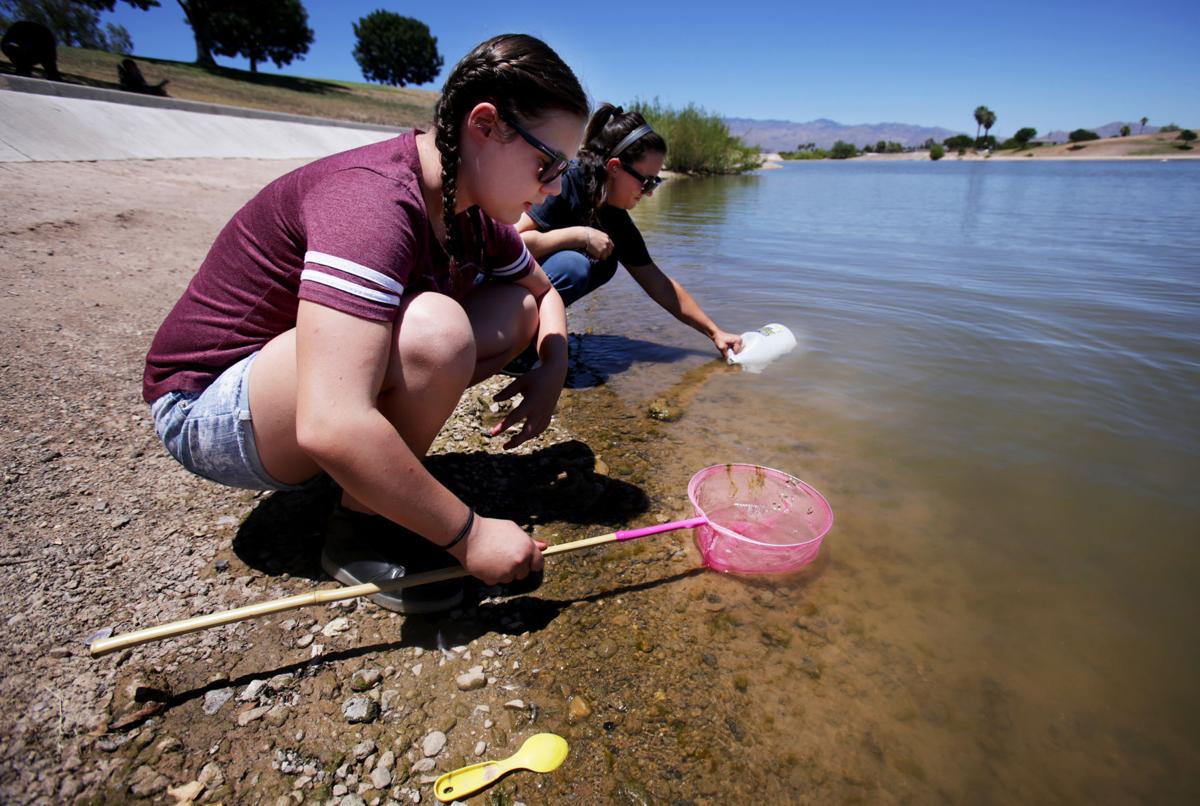 Natalia Smith dips her net for minnows while she settles in for an afternoon at Lakeside Park with her mom, Stacey. 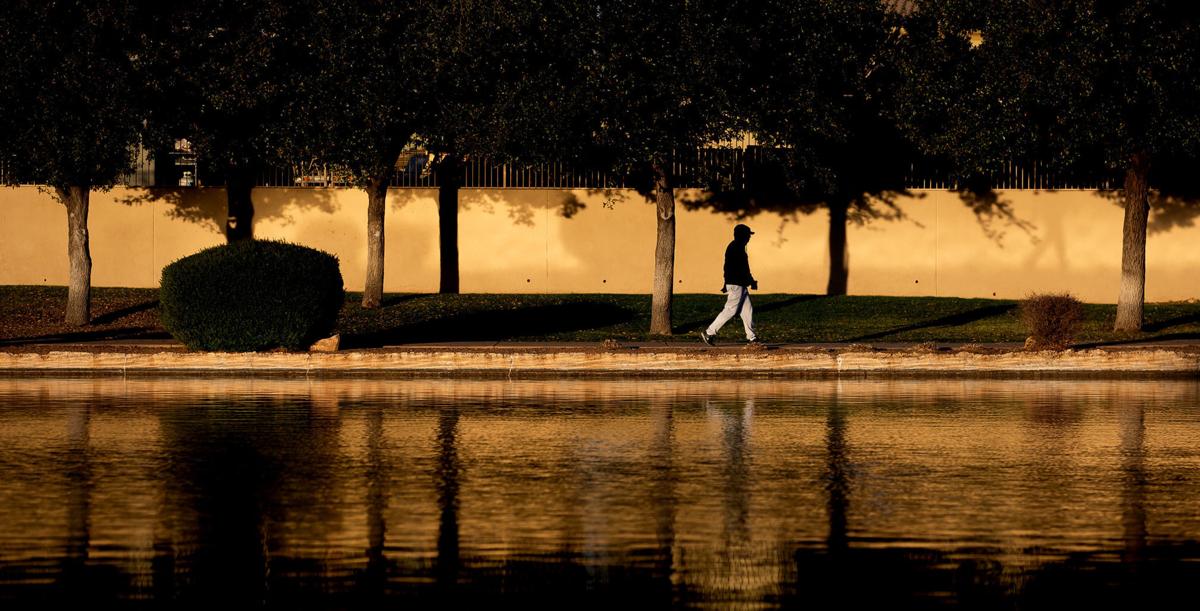 For many, troubles of the day melt away along the banks of Sahuarita Lake, above, and other fishing spots in the Tucson area. Annual licenses range from $24 to $37. 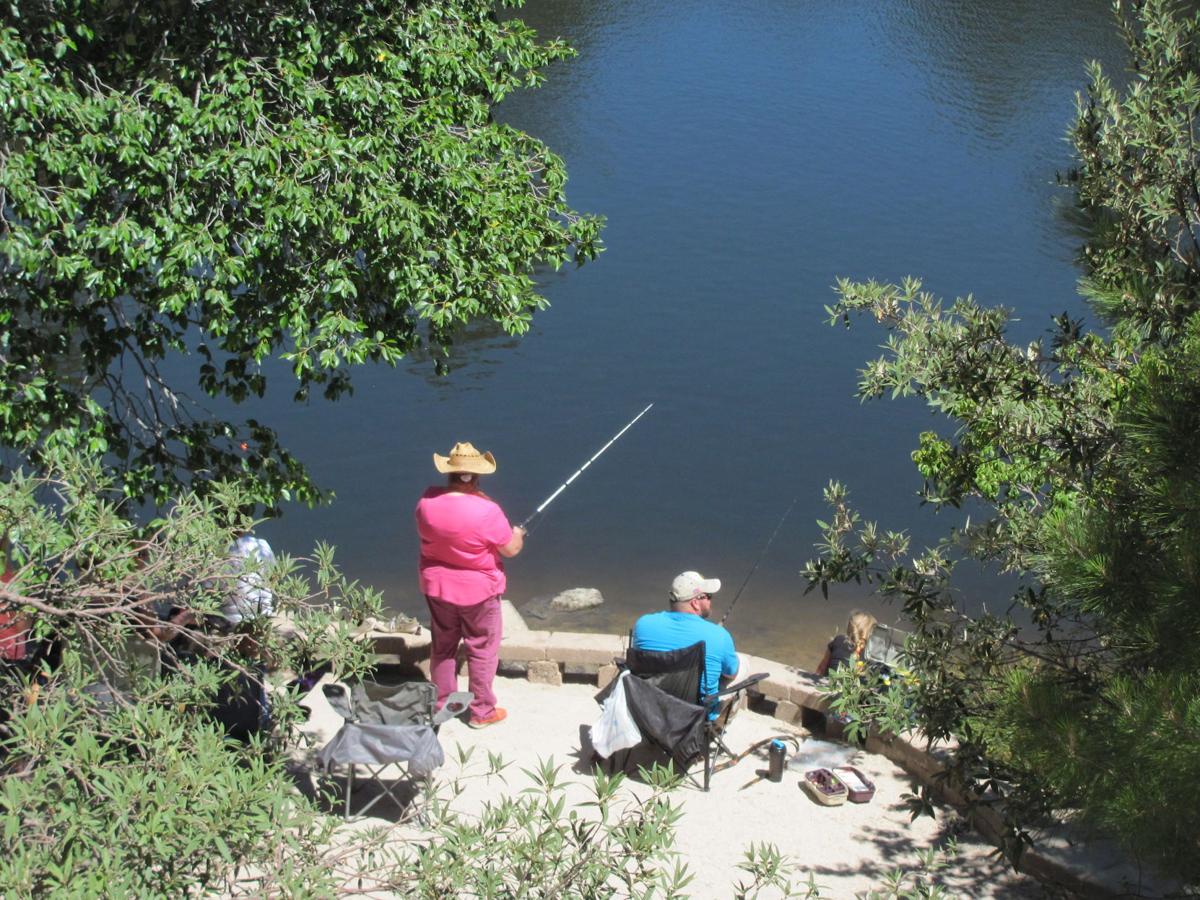 Anglers wait for the fish to bite at Rose Canyon Lake in the Catalina Mountains.