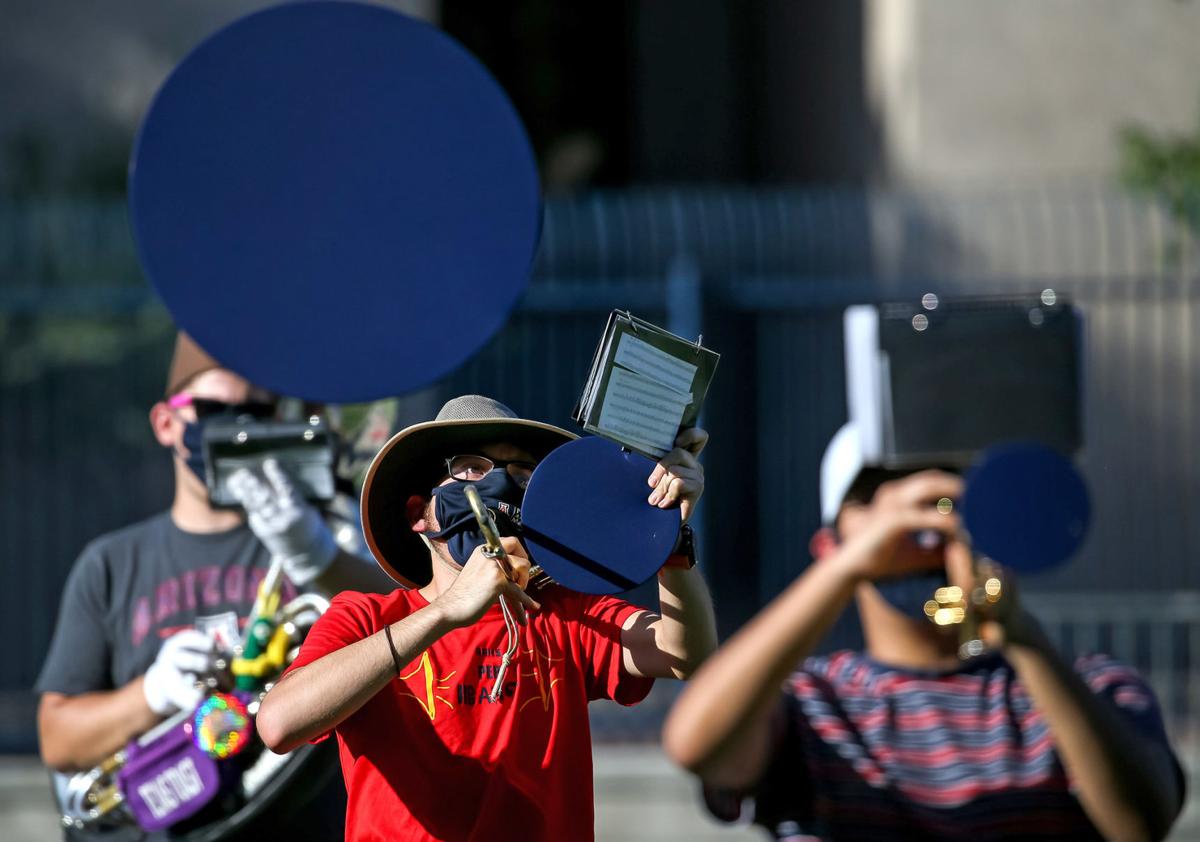 Pride of Arizona wind players cover their instruments with bell covers while practicing at Bear Down Field. Band members are required to wear masks and keep a safe distance from each other, and all the wind players have these special bell covers. 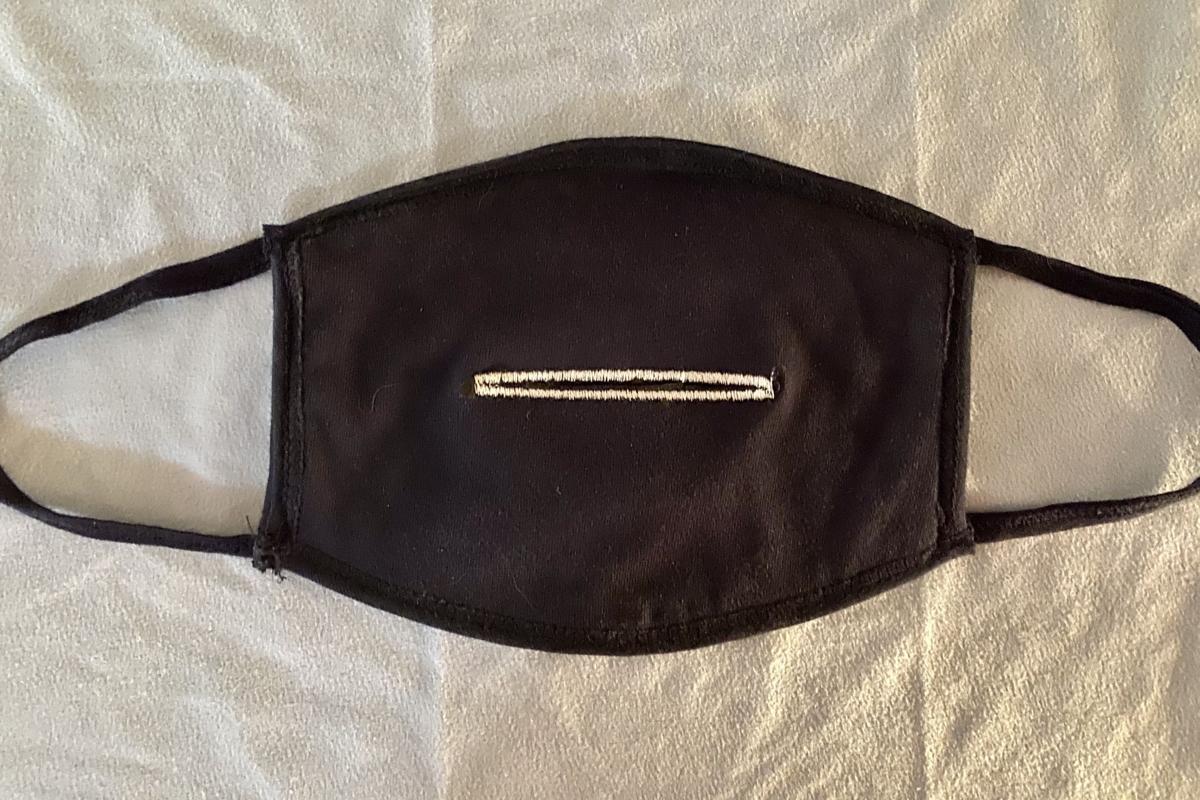 Pride of Arizona band members wear special masks that allow wind and brass players to keep their masks on while performing. 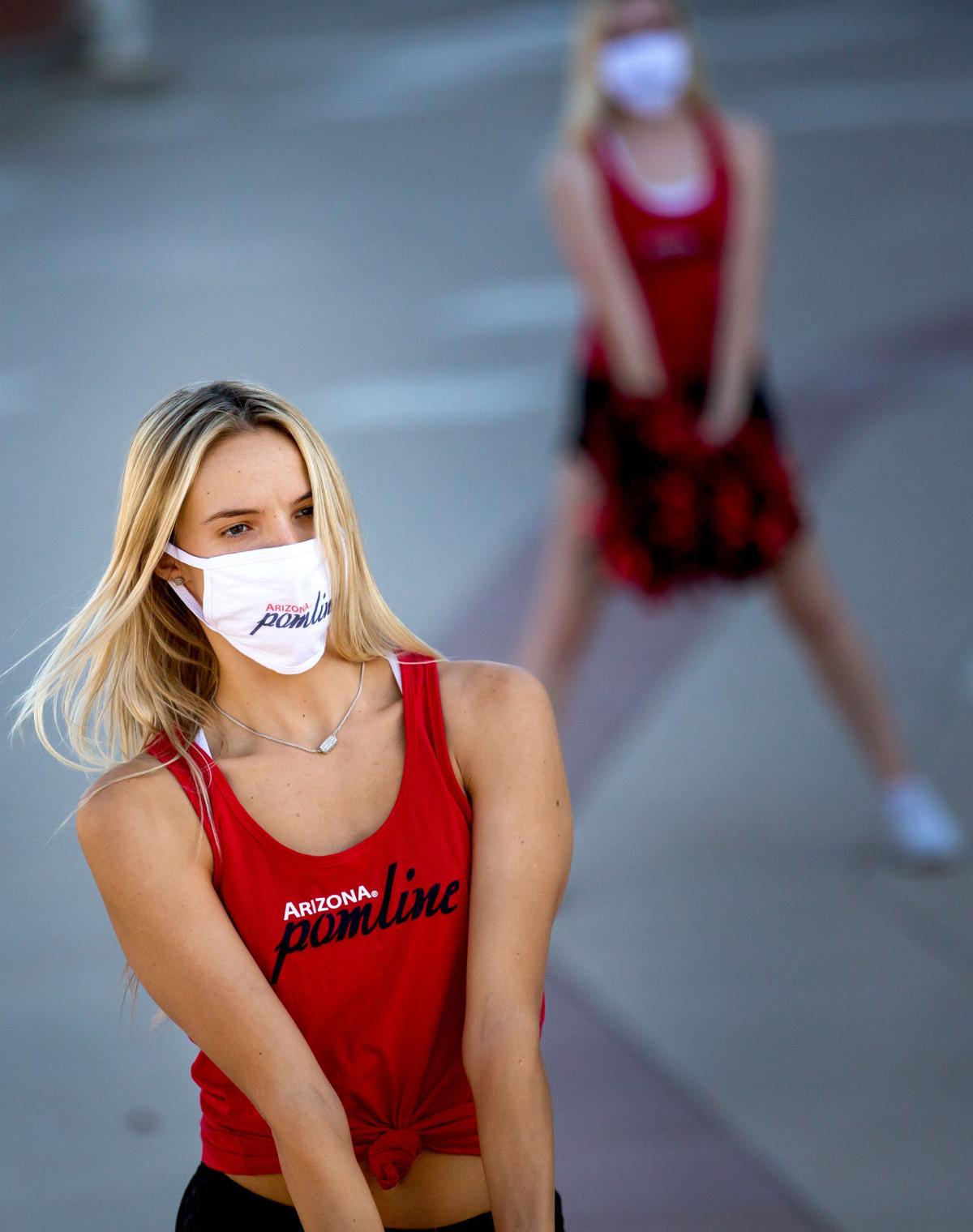 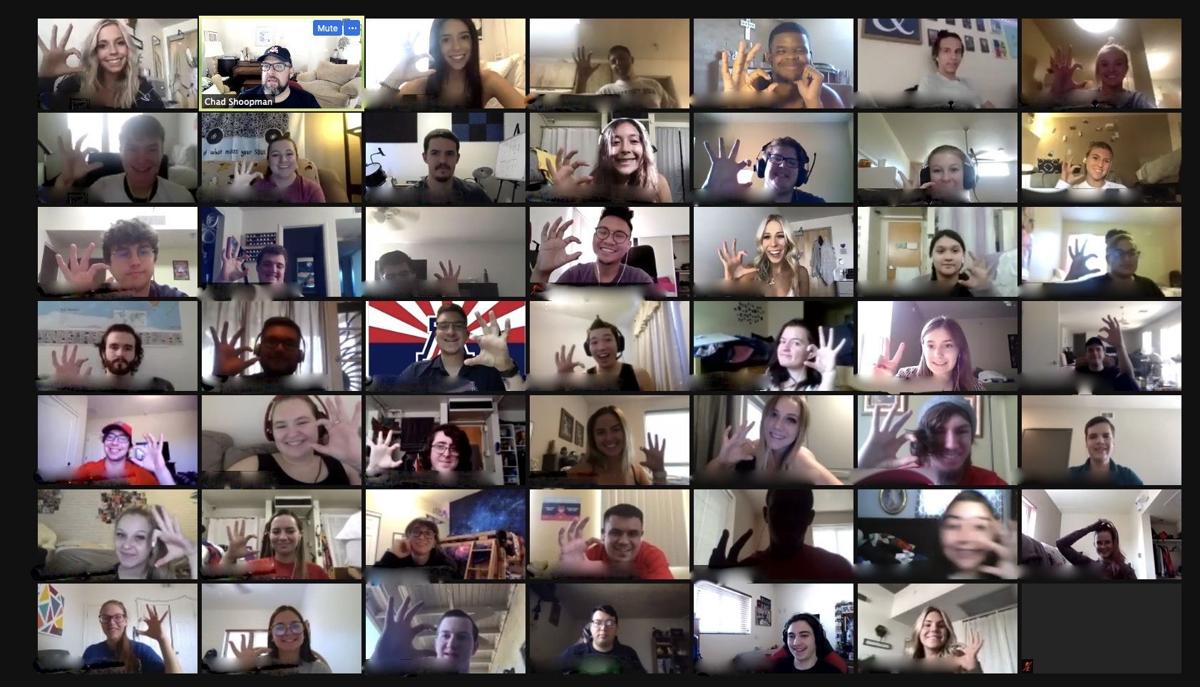 Members of the UA’s Pride of Arizona marching band had to rehearse on Zoom early in the semester. In September, they started in-person practices with social distancing and mask requirements.

By Sunday Holland For the Arizona Daily Star

From World War II to 9/11, the Pride of Arizona Marching Band has brought spirit and cheer to the Tucson community, even during the toughest of times.

But in the band’s 118-year history, it has never faced a challenge as big as COVID-19.

Since returning to campus in August, members of the University of Arizona marching band have not been able to rehearse in person until recently, and even then only with limitations including a specially designed mask for wind and brass players.

“I didn’t realize I was gonna miss (practicing in person) as much as I did,” said third-year band member Davis Ong, who leads the cymbal section. “I was getting excited to hear things like live drums and winds.”

On Sept. 28, band members began in-person practices with 80% of the 250-member band, and although things have returned to some sense of normalcy, the band will not be back on the field anytime soon. The Pac-12 has said fans and bands will not be allowed in the stadium when the Wildcats start their football season Nov. 6, a move that prompted a league-wide petition drive.

At the band’s practices, members are required to wear face masks and social distance; wind players with the exception of those playing piccolo have special four-ply, two-layer masks that act as bell covers for their instruments and allow them to play without removing their masks.

“You can’t get your horn up to your face as quickly as we have in the past, but that’s just a minor thing, and so people seem to be doing great with them,” said Chris Brown, who leads the trumpet section. “The band really does sound solid.”

On a recent Monday afternoon, on an otherwise empty campus, the percussion and wind sections met at Bear Down Field. And even with the new rules and social distancing, “it felt closer to normal life than it has been for several months now,” Ong said.

“One of my philosophies in teaching is every challenge presents opportunities, and sometimes they are hard to find,” said Chad Shoopman, who directs UA’s athletic bands. “Life is like two train tracks, the positive rail and the negative rail, and a lot of times you are forced onto one or the other. Which rail do you want to pay attention to? There are always things to be thankful for.”

Since that first in-person session, the band now practices from 3 to 5 p.m. every Monday, Wednesday and Friday.

Last March, the Pride was in Las Vegas, cheering the UA men’s basketball team in the Pac-12 Tournament when everything was shut down because of COVID-19. The band and players had to return early and then leave campus altogether when the city and state shut down.

Since then, they have had little to do beyond creating campus-wide morale-boosting music videos. Football season, the band’s busiest time of year, was pushed back to November, and all the band’s campus and community appearances have been canceled. They have practiced together on Zoom, which allowed the band members to gather in a virtual room, which Brown said helped the members stay connected.

“It was really great staying in touch with people. Communication was really easy, and people were so excited to have band in any capacity that it made it really easy to still stay connected,” he said.

COVID-19 “is a perspective-giver. We are so lucky to be able to be together and make music together,” Shoopman said.

In normal times, the Pride of Arizona was ever-present on campus and the community, performing at the weekly Bear Down Friday pep rallies and cheering on the team at Arizona Stadium during football season. The 55-member Pep Band also performed at basketball games.

“You don’t have to think alike or agree, but in that moment on the field we are all together. You get to connect with people who you wouldn’t normally,” Shoopman said. “That’s what I think is maybe one of the most beautiful things about athletic bands, is that ability to come around a common goal and achieve something powerful through music, and then watch 55,000 people react to it.”

This will be the first time since 1922 that the Pride has not performed at UA football games. Pride of Arizona and other Pac-12 school bands, pom squads and cheerleaders have launched a petition at moveon.org in hopes of convincing the league to change that. You can find the petition at tucne.ws/supportspirit.

Photos: The Pride of Arizona takes the field with virus safety in mind

Sunday Holland is a University of Arizona journalism student apprenticing with the Star.

The University of Arizona's Pride of Arizona marching band has consistently been ranked in the top 10 of college marching bands and has appeared before audiences as large as 62,000 in person plus 90,000 watching on TV when it performed in the Los Angeles Coliseum for the first Super Bowl in 1967. It also performed in President Jimmy Carter’s inauguration parade 10 years later.

Just last fall, Gwen Stefani and members of No Doubt tweeted about the band performing their songs, and there were over 500,000 views on her Instagram post within two hours.

Three years after being diagnosed with Parkinson's disease, Tom Philabaum has sold his glass art gallery in downtown Tucson and is ready to return to the simple pleasure of making art.

Linda Ronstadt looks back at her most cherished moments

NEW YORK — Growing up close to U.S. border in Tucson, Linda Ronstadt was exposed to the music and culture of Mexico from an early age. Her fat…

This historic Tucson neighborhood is exploding with works of art

Colorful adobe homes are the draw for one of Tucson's oldest neighborhoods, but murals and other works of art are another reason to venture over to Barrio Viejo.

The National Book Award is the most prestigious honor in American literature. Lydia Millet, who moved to Tucson in 1999 to work with the Center for Biological Diversity, is being honored for “A Children’s Bible.” The novel, described as a story of teenage alienation and adult complacency in an unraveling world, was published by W.W. Norton in May.

University of Arizona choral directors have rewritten their playbooks to keep their students engaged even as meeting in person has been limited due to the coronavirus pandemic.

The choir is open to kids from second through 12th grades from Sahuarita, Tucson, Oro Valley, Marana and the greater Tucson area who will perform a work composed for virtual choir.

Arizona head coach Kevin Sumlin made his way back to the practice field exactly one week after testing positive for COVID-19.

Pride of Arizona wind players cover their instruments with bell covers while practicing at Bear Down Field. Band members are required to wear masks and keep a safe distance from each other, and all the wind players have these special bell covers.

Pride of Arizona band members wear special masks that allow wind and brass players to keep their masks on while performing.

Members of the UA’s Pride of Arizona marching band had to rehearse on Zoom early in the semester. In September, they started in-person practices with social distancing and mask requirements.