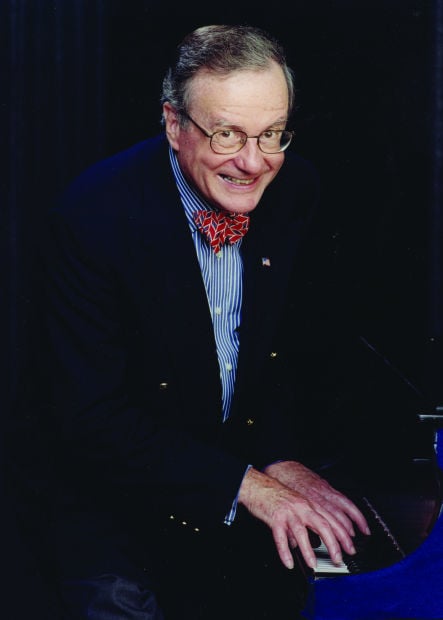 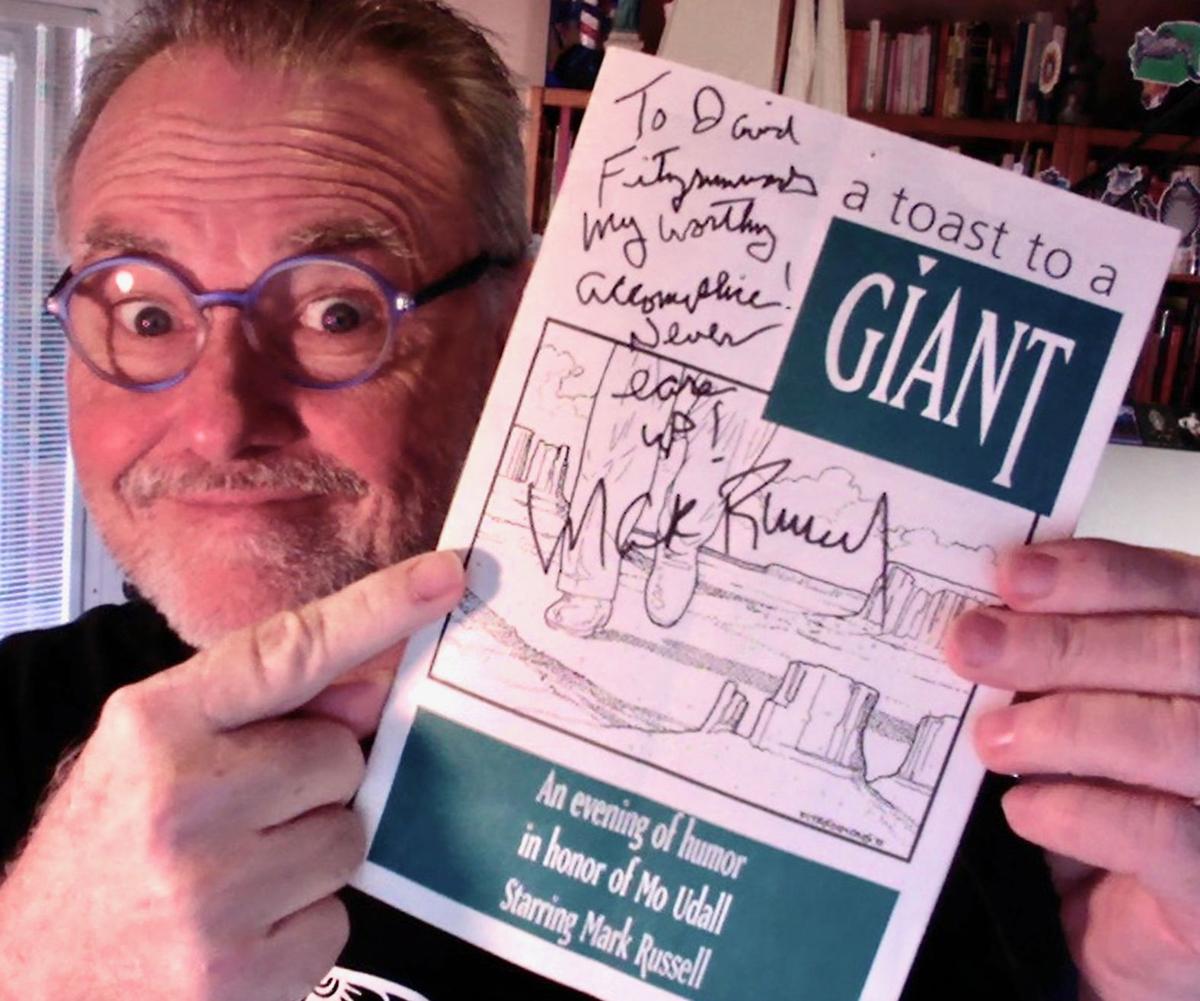 I’m a fan boy who discovered the genius of Mark Russell on PBS, with my folks, when I was a teenager dreaming of becoming a political cartoonist.

Mom and the Master Sergeant loved watching him on the Magnavox so that meant I watched every one of his one zillion PBS Specials between 1975 and 2004 with his trademark stars and stripes piano and satirical songs.

At the zenith of the Golden Age of Political Satire, the Watergate scandal, I became a cartoonist at the “Arizona Daily Wildcat.” Raised on talents like Allan Sherman, “How are things in Camp Granada” and Tom Lehrer, ”So long mom I’m off to drop the bomb”, I adored Russell. Here was a guy who played a piano and sang political commentary the way I drew. Whether artfully commenting on the turmoil of the time from Buffalo, New York, or from the stage of the Shoreham Hotel in D.C., he was consistently savage, insightful and funny.

The first time I met Mr. Russell was in the early ’90s at Centennial Hall for “A Toast to a Giant: An Evening of Humor in Honor of Mo Udall.”

I was one of the speakers honored to share that stage with Senator Barry Goldwater and Governor Rose Mofford before Russell headlined the night. Backstage, in the green room, I found the nerve to introduce myself. We talked about producing timely satire. “We’re in the same line of work. Cottage cheese has a longer shelf life,” he said. Peppering him with praise and inane questions, I was babbling like “SNL’s” awestruck Chris Farley interviewing Paul McCartney.

A mere kid, I knew I had made a fool of my young self. In spite of that, the ever gracious Russell autographed my program: “To David, My Worthy Accomplice! Never ease up! Mark Russell.”

That night he went on stage and killed. Worthy accomplice? Me? I framed the program.

I knew his son, Tucson’s own Matt Russell, the affable CEO of his own public relations firm and the witty host of “On the Menu … Live!”, but through the years I felt uneasy about asking Matt to introduce me to my idol.

I was surprised to encounter my hero again, decades later, here in Tucson! I was at Tucson’s Festival of Books where my friends and I had just performed our “Arroyo Cafe Radio Show” in the Student Union Ballroom. As the applause died down a nice older gent approached me out of the crowd. Is that THE Mark Russell? What the heck? My hero had been in our audience with his family the whole time? Mr. Russell told me he loved our show. Our show? He loved our songs! Our songs? And then he said to me, “I’d love to be in the show sometime.”

He and his bride are winter visitors. As I’m greeting his family members I’m thinking, “THE Mark Russell wants to be in MY show?” Such a nice fella, making this nobody feel like a big shot with a kind fib. As if he really wanted to be in our small town show. I squirreled the memory away and never pursued his polite offer.

The next time I saw Mr. Russell was at a subsequent Tucson Festival of Books. I wanted to connect him to humorist Dave Barry and “SNL” writer Alan Zweibel, two authors whose joint appearance I was moderating. They were fans. I planned to introduce Mark in their audience in the middle of the Barry-Zweibel event as a surprise for attendees. “Meet me where the authors meet their escorts and I’ll escort you to the event,” I said.

I stood and waited. Where was he? We stood next to each other for the longest time, wondering where the other one was. We thought it was pretty funny we didn’t see each other and then I had the conversation of a lifetime with my idol.

We talked about staying relevant. Retirement. Aging. Longevity. His blog. Satire. State of the world. Family. Personal happiness. Memoirs. I prized his book, “Presenting Mark Russell.” I encouraged him to write a sequel. In his late 80s, the man could not be sharper. I learned Mark was a Marine. His satire grows out of a profound love of country.

When I introduced Mark in the audience, at the Barry-Zweibel talk, the TFOB crowd was thrilled. What a lovely surprise. They adored him. Mark savored the brief spotlight, told some jokes and bantered with Dave Barry and Alan Zweibel.

I felt good about honoring my hero’s presence here.

A few months later I started getting emails from Mark with attachments, MP3s of songs he’d been working on, like “The Mar-a-Lago Tango,” or his version of “Crazy,”, about a certain President we all know.

“Crazy, the guy we elected is crazy.

Maybe a second opinion is due.

I was so blown away it might as well have been Picasso sending me some paintings he had been working on. And then I was shocked when I got a Facebook message from my friend Nancy Stanley, a brilliant comedian and the assistant dean of the University of Arizona law school. This summer Nancy had gone back East and had somehow encountered an acquaintance of mine:

“I just had a conversation with MARK RUSSELL and he referred to you as a good friend. So you can die happy.”

THE Mark Russell called me a “Good friend”? Days later the thought entered my tiny head, “Well, heck. Maybe he wouldn’t mind being in our show. Why not ask?”

I got an email response. Mark Russell would be delighted to perform in this years’s “Arroyo Cafe Holiday Radio Show,” which will be performed at the Rialto Theatre on Saturday, Dec. 7.

By then our fundraiser for Casa Alitas and other related causes was packed with talent. I had already lined up “Triple Threat” (Andrews Sisters eat your hearts out) — a trio made up by Crystal Stark, Katherine Byrnes and Julie Anne; former Tucson Mayor Jonathan Rothschild, FBI Assistant Director for Counter-Intelligence Frank Figliuzzi, Mayor Regina Romero, Sly Slipetsky, the Gaslight’s Piano virtuoso and all the Arroyo Players.

The cast and I were thrilled. When I was 16, watching America’s greatest musical satirist on PBS, I never imagined I’d be 64 and hosting a show featuring the same genius, let alone renting a grand piano for him to play.

Obviously, my friend, Mark, is a soft-touch for good causes.

Here is a follow-up email he recently sent, which I am going to print, frame and hang next to my autographed Mo Udall program:

As Hirohito once said, I am looking forward to December 7, as I plan to tell the audience, only for David Fitzsimmons would I come out of retirement.

Thank you for providing a piano. I never played one of them new-fangled electric thing-a-ma-bobs without the bongos and the maracas kicking in.

You are a genius by the way.

Hope we see you all soon, at the Rialto. Doors open at noon. The show is at 1 p.m. My friend, Mark Russell, will be there.

Tucson road trip: Take a tour of one of the largest irrigated pecan orchards in the world

Craft breweries from across the state will be pouring samples at Reid Park Zoo's Brew Lights, taking place this Saturday, Dec. 7, from 6 to 9 p.m.

Calling all Tucson performing arts organizations: Share your spring schedule with the Star

Performing arts organizations take note: It’s time to get your spring schedules to the Star if you want to be considered for inclusion in Cali…

DeGrazia Gallery in the Sun has a day of music, dancing and celebration in store with its annual La Fiesta de Guadalupe, this Sunday, Dec. 8.

Navigating the holidays through the lens of John Waters includes mocking political foes and enemies alike, avoiding the words "I love you."

Snoochie boochies: Smith and Mewes at The Loft this weekend

Kevin Smith and Jason Mewes, the director-and-actor duo known to fans around the world as Jay (Mewes) and Silent Bob (Smith), are in town this…

Civic Orchestra of Tucson performing work based on Gregorian chants

COT Conductor has championed the piece's composer for three decades.

Tucson Village Farm will hold its fifth annual Holiday Market this Tuesday, Dec. 10, from 4 to 8 p.m.

Death follows heart surgery and comes days before he was to do a show at the Rialto.

Review: ‘Superstar,’ now on stage at Centennial Hall, more of a fast-paced rock concert than a play

The play looks at Tucson's Hispanic community and the Old Pueblo's rich culture.

Facts you never knew about the Fourth of July

These are Carl Reiner's biggest movies and tv shows

These are Carl Reiner's biggest movies and tv shows