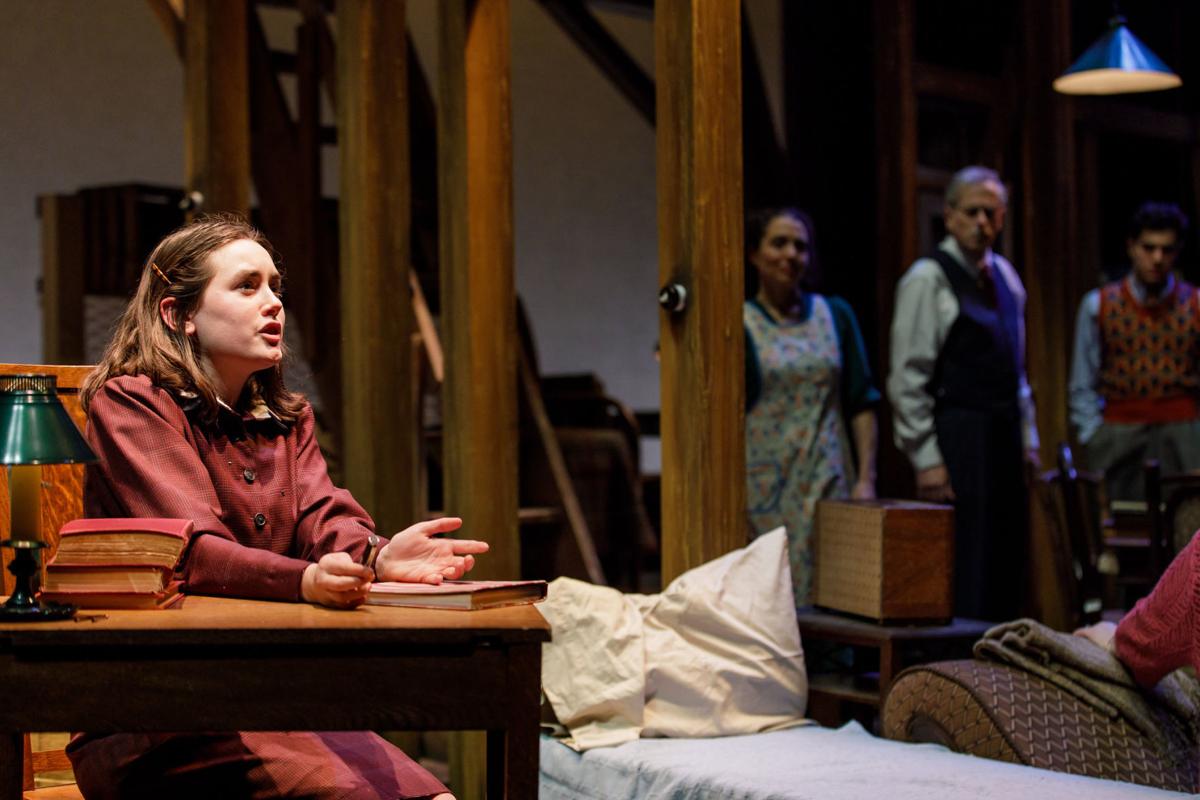 Anna Lentz, left, plays Anne Frank in ATC’s “The Diary of Anne Frank,” an adaptation that is packed with suspense. 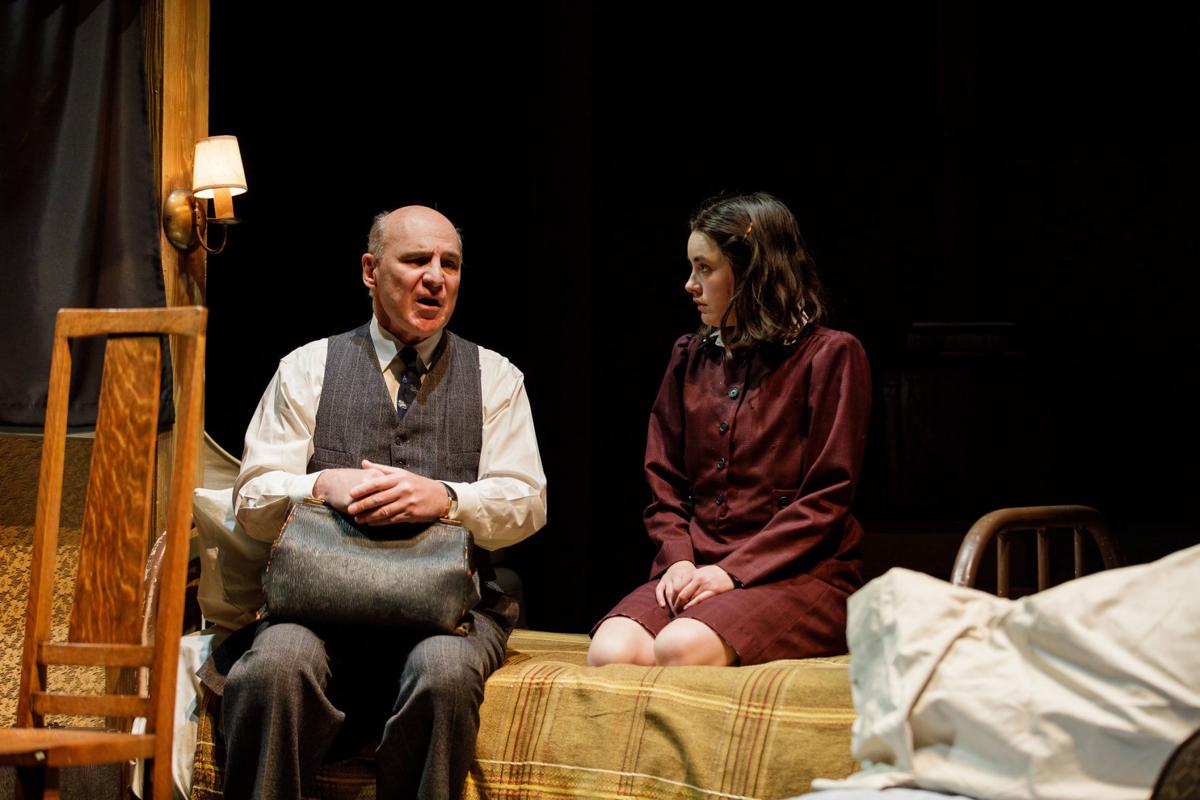 We know the ending of “The Diary of Anne Frank” even before the play begins.

We know that death will come to all but one of the eight Jews hiding in a claustrophobic Amsterdam space for two years while the Nazis take over the Netherlands and much of Europe, systematically murdering Jews and others deemed not worthy of living in the process.

Yet Arizona Theatre Company’s production of this dramatization of the true tale is packed with suspense.

Credit for that goes to the sounds of steel doors slamming, snippets of Hitler’s speeches and the screeching of bombers flying overhead (Dan Roach did the haunting sound design). And it is especially due to the tight and thoughtful direction of David Ira Goldstein, ATC’s artistic director emeritus.

“Anne Frank” is, of course, based on the diary that the just-turned-13 Anne kept as she, her family and four others hid away, hoping they would never be detected by the Nazis.

Quickly into the production you can feel the space get tighter as more and more move into the two-tiered building annex (Bill Clarke’s scenic design is almost stifling it is so effective). They are willing to be imprisoned to escape a prison much more hellish. Along with Anne, her parents Otto and Edith and sister Margot, the space is shared by teenaged Peter Van Daan and his often-fighting parents, and a grumpy dentist.

It isn’t long before tempers flare, food becomes scarce, boredom brews, and the better sides of some slip away.

Anne records everything in her diary: the arguments, the hoarding of food, the odd assortment of personalities and her rich inner life. That life is in a bit of a turmoil — her body is changing, her optimism is tested, her mother is annoying, she has a crush on Peter.

World War II and the Holocaust were more than 50 years ago. But this play, adapted by Wendy Kesselman from Frances Goodrich and Albert Hackett’s original Pulitzer Prize-winning script based on the diary, feels so raw and vivid that there is no doubt that what happened then can happen now.

The cast was led by Steve Hendrickson, who brought wisdom and warmth to his Otto Frank. The last scene, especially, was so deeply felt that it is no wonder that sniffles were heard throughout the Temple of Music and Art theater.

Naama Potok was a stoic presence as Edith Frank, a woman not given to complaining but who finally cracks thanks to confinement and the pettiness of the Van Daans (Gus Cuddy and Ann Arvia, both of whom brought a humanity to borderline unpleasant people). And Michael Santo as the grumpy dentist provided some fine lighter moments as well as some heartfelt ones.

Anna Lentz was in a tough spot with the role of Anne Frank. When we first meet her, she is giddish and girlish and sees the hiding away as an adventure. She has to evolve into a teen who is more thoughtful, more aware of the dangers, but still steeped in an innocence and optimism. Lentz was not so successful as the early Anne — her annoying, talks-too-much teen didn’t ring true. She felt more comfortable, more honest, as Anne got older and a little bit wiser.

“The Diary of Anne Frank” is an essential story — not just because it is imperative that we remember the Holocaust to honor the millions who were killed, but also because we must guard against it ever happening again.

These days, we see early signs of that around the world as the alt-right asserts itself, Muslims are vilified, and people of color are often treated as sub-humans. As Hitler began his crusade, many were complacent, sure it would never impact them, that his insanity would never be allowed to take hold.

This powerful production of “The Diary of Anne Frank” is a stark reminder that if we are not vigilant, none of us are safe.

What: Arizona Theatre Company's production of "The Diary of Anne Frank."

When: Various times through May 12.

David Ira Goldstein is back at Arizona Theatre Company.

“Tis the times’ plague, when madmen lead the blind.”

Two of the six plays in the ATC's 2018-19 season are by women and three are by playwrights of color.

Tucson theaters are beginning to roll out their 2018-19 seasons, and it looks as though we’ve got some old friends returning, and some new one…

The gift is the largest individual donation in the museum’s 94-year history.

Artifact Dance Project closes out its season with “New Moves,” which features three new works by a trio of young choreographers:

Anna Lentz, left, plays Anne Frank in ATC’s “The Diary of Anne Frank,” an adaptation that is packed with suspense.