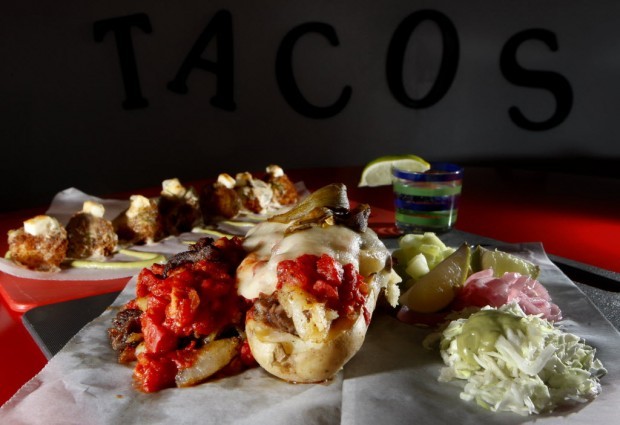 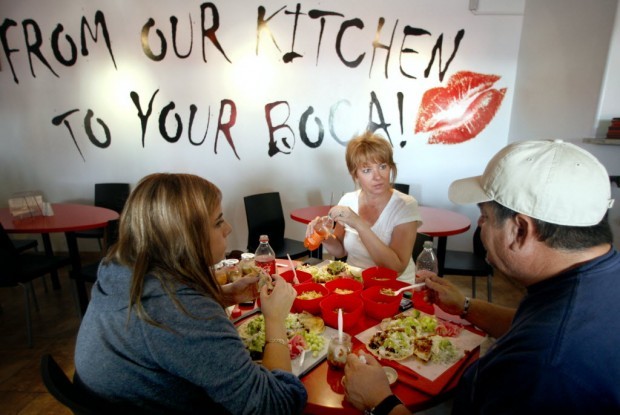 Dominique Rodriguez and her parents, Darci and Raul, sample some of the offerings during a recent lunch at Boca.

How long did it take to clean the grease off the walls at Greasy Tony's, the legendary university-area sub shop that closed in 2008?

For Bryan and Maria Mazon, it took 14 months from signing the lease for Tony's place to opening their taco shop, Boca, in May.

Besides renovating the building's appearance, the husband-and-wife team also redid all the plumbing and electrical work.

"We basically gutted out the whole building," Bryan Mazon said.

The Mazons are no strangers to the Tucson food scene. Bryan's family owns the Papagayo Mexican Restaurant and Cantina, where Maria, a native of Sonora, Mexico, is the executive chef.

Their Boca venture is entirely separate, Mazon said, with a focus on fast, casual food at a student-friendly price.

Three months in, Boca (which means "mouth" in Spanish) is off to a promising start. The menu offers 16 taco varieties designed by Maria, as well as a carne asada burrito, a fried potato appetizer, chocolate ganache cake for dessert and 39 varieties of tequila to cleanse one's palate. Mazon said his goal is to reach 100 bottles as soon as possible.

And while Boca proudly displays five varieties of salsa, don't look for chips. You have to save the experiments in flavor for the main course.

The interior is furnished with plastic chairs and red, circular tables, accommodating groups of four or fewer. Tony's loyalists will find that the dining room is still cozy, and the slogan "From our kitchen to your boca" painted across the southern wall, creates an even more welcoming feel. As a challenge, try to count how many puckered lips logos are kissed onto Boca's tables, walls and signs.

For a snapshot of more traditional décor, see the butcher's block in the kitchen. Mazon fashioned it himself from a tree trunk he found near a highway.

During our afternoon visit, a World Cup game flickered from a flat-screen TV, animating an otherwise quiet dining room. When the school year kicks in, expect plenty of late-night cable to hum behind tipsy undergrad banter.

We started with an order of Boca balls, one of Maria's original creations. Each ball is a bite-sized dollop of mashed potato, seasoned with chipotle, rolled in panko breadcrumbs and fried to a crisp. Served under dripping squares of cream cheese, the balls are a satiating combination of crunchy and creamy.

For the main course, we sampled five tacos, ranging from $2.95 to $3.75. Each came on our choice of either a flour or corn tortilla and was topped with a mound of shredded greens. Rice and beans can be added to any entree, but we passed on the sides to stuff our stomachs with tacos. For most appetites, two tacos should be enough. The truly ravenous will probably want a third.

According to the staff, one of their most popular tacos is the Macho. As the name suggests, stomaching this taco without dripping peppery tears on your table can be a test of bravado. The Macho is chopped steak wrapped in an Anaheim chile (seeds included) and slathered in melted cheese. If you augment it with one of Boca's more intense salsas, especially the pineapple, jalapeño and serrano pepper combo, you're in for a gauntlet of spiciness. Alas, the challenge comes at the expense of the steak's full flavor.

The most satisfying taco we tried was the chipotle barbecue. There's nothing fancy about this one: It's boneless pork ribs grilled and slow-roasted in chipotle sauce, then shredded over a lettuce-filled tortilla. Unlike the Macho, the warm, juicy quality of the meat in this taco shines through.

The octopus, padded with grilled onions, garlic and lemon, is a rarity in the desert, but is a bit too chewy to outshine the more traditional menu choices. If you really need a seafood fix, try the shrimp tacos or the Mary Tierra tacos.

We also sampled Boca's two vegetarian options. The veggie taco is loaded with sauteed mushrooms, serrano chiles and cilantro, and provides a fresh blend of flavors to entertain your taste buds. The Rajas, which does not appear on the menu yet but is nonetheless available, comes with corn and roasted green chiles and is a hearty and slightly spicy alternative to Boca's meat majority.

Brandon Specktor is a University of Arizona journalism student who is an apprentice at the Star. Contact him at starapprentice@azstarnet.com

Food and wine events for the next seven days

Dominique Rodriguez and her parents, Darci and Raul, sample some of the offerings during a recent lunch at Boca.
© Copyright 2020 Arizona Daily Star, 4850 S. Park Ave. Tucson, AZ | Terms of Use | Privacy Policy
Powered by BLOX Content Management System from TownNews.com.
You don't have any notifications.