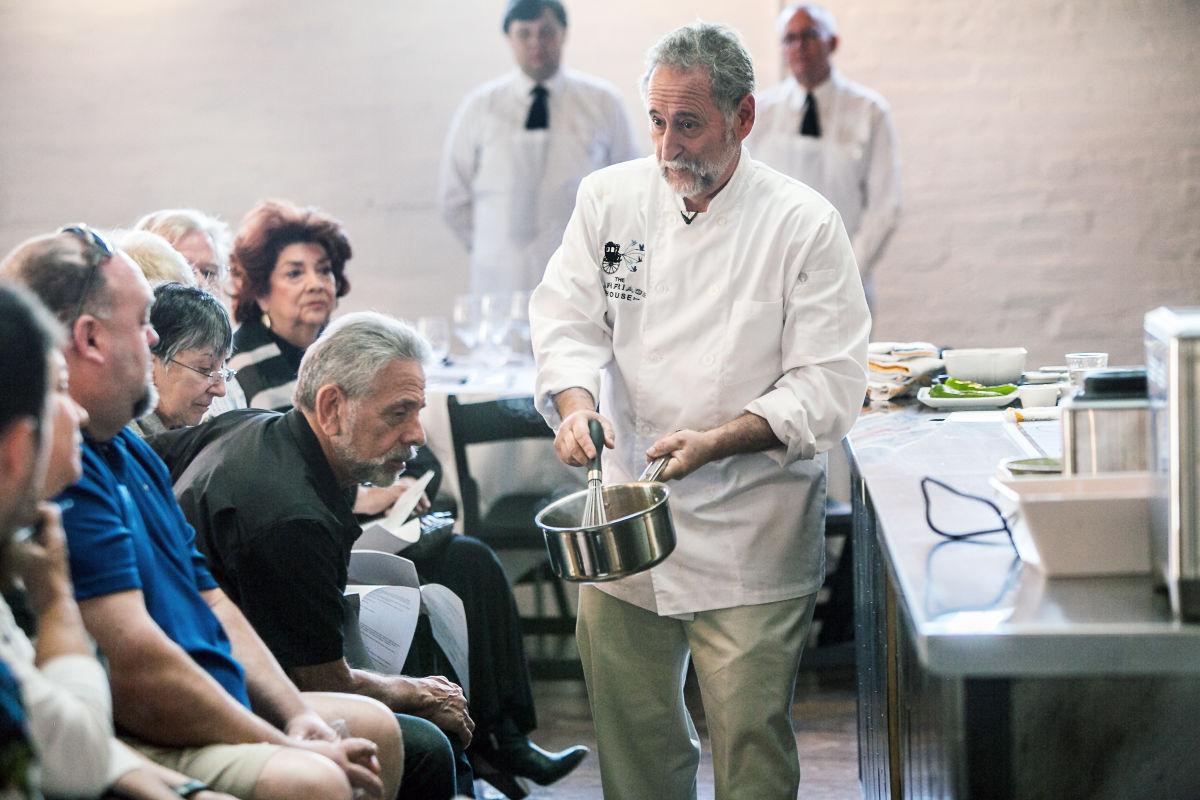 Chef Janos Wilder will host a culinary tour of cities designated by UNESCO as Cities of Gastronomy. Wilder will create dishes from Rasht, Iran, Phuket, Thailand, Parma, Italy and Ensenada, Mexico over the summer. 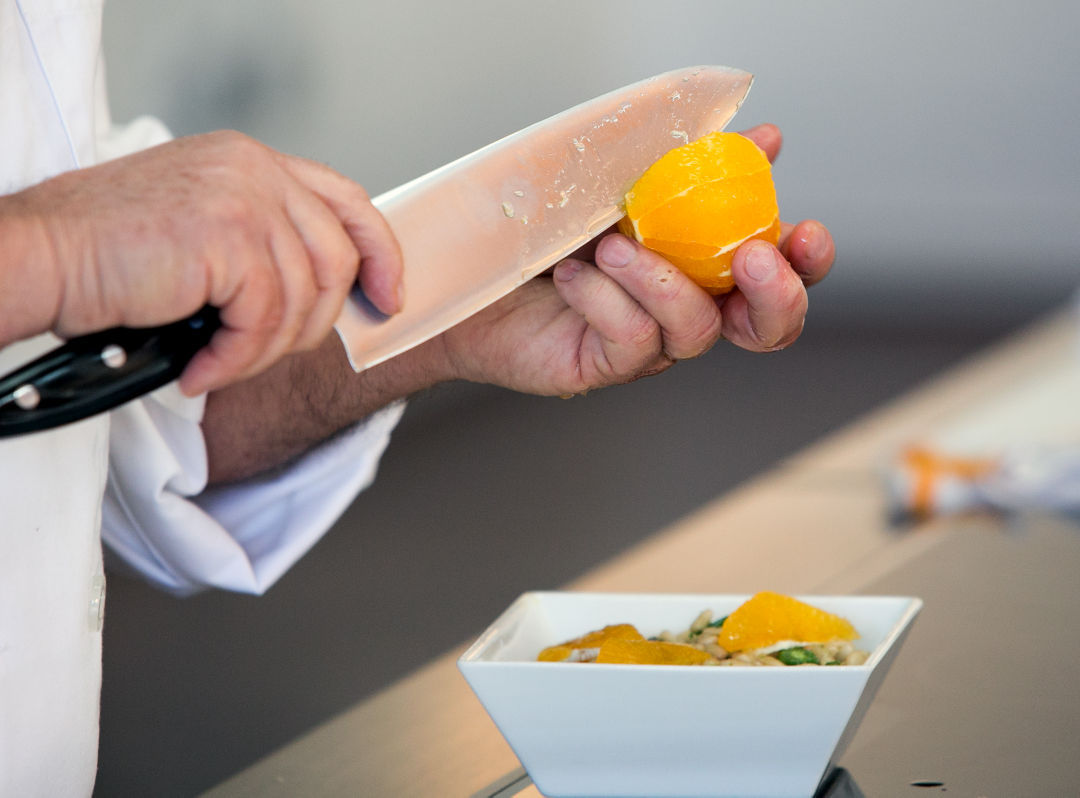 Wilder sections an orange that will appear on his tepary bean and cholla bud salad. 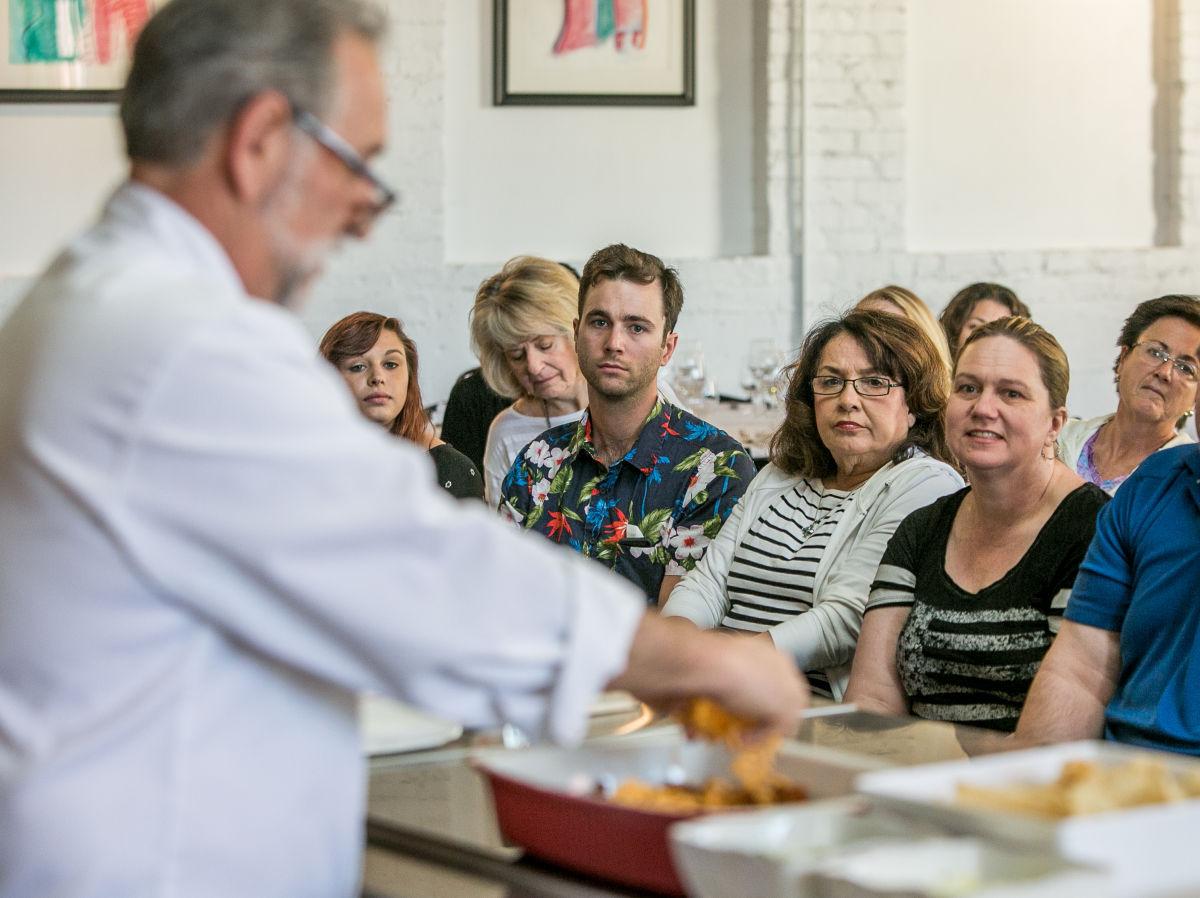 Audience members watch as Wilder prepares chorizo chilaquiles. The room is lined with tables, where attendees will dine on the dishes presented at the demonstration.

By Elizabeth Eaton For the Arizona Daily STar

The light hits you the moment you pass through the double glass doors.

It bounces off the white brick walls and illuminates the paintings in the shallow alcoves to your right. The sun streams through the windows to your left. Above you, nine disco ball-like chandeliers illuminate what the sunshine does not — a long industrial table covered with towels, bowls, spoons, and enough cooking utensils to make you realize food is serious business here. Four rows of chairs are spaced to view the action at the table, and six smaller round tables, three on each side, border the room.

This is the Carriage House, just a jaunt across an alley from Janos Wilder’s Downtown Tucson restaurant. It is the latest creation of the long-time Tucsonan and James Beard Award-winning chef. The former two-bedroom apartment has been transformed into a space ready for cooking classes, private events and even Sunday dim sum.

Wilder, dressed in chef whites and peering over reading glasses perched on the end of his nose, takes his place behind the table.

You can feel the anticipation buzzing in the audience. More than 30 men and women are ready to learn — and eat — at Wilder’s first cooking class, which celebrates Tucson’s designation as a City of Gastronomy.

A skylight positioned perfectly over the demo table lights up the chef. Your eye is drawn to the exposed pipes and wires that crawl across the ceiling and the back wall, giving the room a raw feeling. This isn’t just some industrial kitchen, perfectly spotless and churning out uninspired dishes.

This is the Carriage House, where Tucsonans are welcomed in to cook, learn and break bread together.

Though the cooking class is more like a cooking lecture — you don’t actually get to make any of the food yourself — it is still easy to learn as you watch Wilder craft four dishes specifically made to honor native Tucson ingredients.

His hands dance over the table as he chooses his ingredients and tools. He has an unconscious ease as he whisks the red chile velouté to be used in his chorizo chilaquiles. Without missing a whisk, Wilder explains what he’s creating, fields questions and shares a bit of his cooking philosophy.

“I cook from here and here,” Wilder says as he points to his heart and head, “and my mouth.”

Wilder wants you to know what Tucson tastes like, how you cook with Tucson. Each dish features ingredients with deep roots here — cholla buds, huitlacoche, chiltepin chiles.

He uses a blowtorch to roast the Anaheim chiles, and you can hear the almost too-green-to-be-real skin crackling under the heat. He opens the chile to show you the seed pods inside before scraping them out. The spiciness tickles your nose.

Wilder sautés the mixture that will go into the chile — relleno means stuffed. The garlic, chipotle and huitlacoche mix together and the aroma wafts over the room. A collective “mmm” is heard as appetites quicken.

After two hours, it’s time for your taste buds to experience the food that so teased your senses. You take your seat at one of the circular tables. A waiter pours you a glass of wine.

Wilder visits each of the tables, checking in with you and what you thought of the class. There were some mishaps — this was the first time Wilder had ever used some of the cooking equipment, and technical difficulties with cameras and monitors made it hard to see him cook. But the attendees don’t complain, and instead gab about how they can vary the recipes to make them more doable at home or to accommodate dietary needs.

The waiter returns, this time with a plate of food. Along with the chilaquiles and chile relleno is a tepary bean and cholla bud salad, carefully garnished with a fuchsia-colored amaranth shoot and a single slice of orange.

The red chile velouté that Wilder whipped up with ease envelops the chilaquiles with a rich-but-not-too-heavy flavor. The chile relleno is soft and rich, filled with the sautéed mixture and cheese, and spicy in a way that delights the tongue and doesn’t set it on fire.

You take a bite, and you know.

What: The Carriage House.

Dim sum: 10 a.m.-2 p.m. Sundays. In addition to traditional Cantonese dim sum offerings, small plates inspired by cuisines from around the world will be offered. Charged by plate, from $5 to $15.

Tucson dining: What came and went in 2015

A look back at the year of eating.

Food writer Andi Berlin takes a trip to Commoner & Co. to learn the secret behind their southern fried gem.

Watch: A foodie tour of the Tohono O'Odham Swapmeet

The weekly event at 5721 S. Westover Ave. is a food lover's paradise. Video by Andi Berlin.

How to taste whiskey: Tucson distiller shows us the basics

Here are seven spots to hit up while in the neighborhood. Video by Andi Berlin.

Chef Janos Wilder will host a culinary tour of cities designated by UNESCO as Cities of Gastronomy. Wilder will create dishes from Rasht, Iran, Phuket, Thailand, Parma, Italy and Ensenada, Mexico over the summer.

Wilder sections an orange that will appear on his tepary bean and cholla bud salad.

Audience members watch as Wilder prepares chorizo chilaquiles. The room is lined with tables, where attendees will dine on the dishes presented at the demonstration.