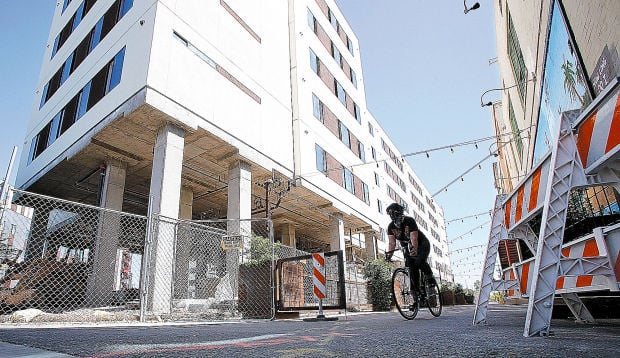 A bicyclist rides near East Congress Street next to the Rialto Theatre on the downtown site of the planned student housing complex. World of Beer, offering a well-stocked bar as well as beer to go, has leased space on the ground floor of The Cadence. 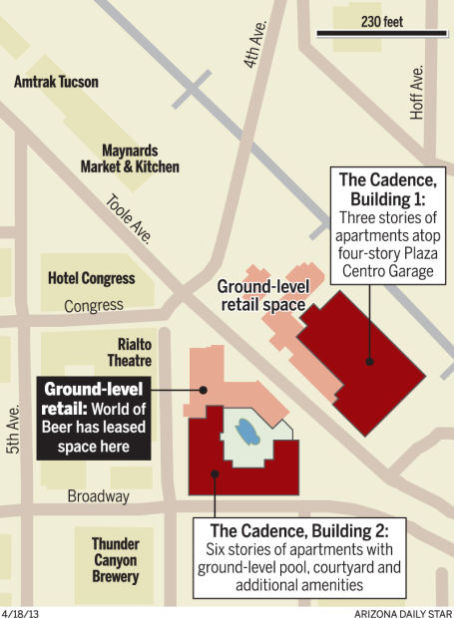 Residents of The Cadence student housing complex downtown won't have to go far for a cold brew.

In fact, they may be fighting for a seat at the bar when World of Beer, the behemoth purveyor of all things brewski, opens on the ground floor of the development in November.

The 3,000-square-foot bar, which also will sell packaged beer to go, will move into the main building of the 465-bedroom six-story complex at 350 E. Congress St., said developer Jim Campbell. Campbell is developing the retail end of the project, which is being built by Alabama-based Capstone Development Partners.

"What we wanted to do was create more of an entertainment venue. You've got the Rialto (Theatre) next door, Club Congress across the street," said Campbell, noting that World of Beer will host live entertainment several nights a week. "It cements the whole entertainment piece on that end (of Congress)."

"I think it's a great amenity. It also serves the development purpose of a mixed-use facility in an urban area," added Chad Izmirian, Capstone's senior vice president who is managing The Cadence development. "It's an added convenience of living not only in The Cadence but downtown Tucson. That's what we're sort of going for with the mixed-use, urban development."

Mike Zembillas, who owns the World of Beer franchise in Tempe, is opening the Tucson bar. He could not be reached for comment.

World of Beer carries more than 500 different bottled beers from all over the world and up to 50 beers on draft, including regional brews. Zembillas' Tempe location has Tucson's Dragoon Brewing Co.'s Biére del Bac and Scout Porter on tap alongside several varieties of Scottsdale's Four Peaks Brewing. The beers are regularly rotated in and out to increase the range of beers represented.

World of Beer will not serve food, although Campbell, the Mesquite Homes builder who also owns Mount Lemmon's Sawmill Run Restaurant and Saguaro Corners Ice House on Tucson's far east side, said the bar will carry menus from surrounding restaurants. Patrons will be allowed to bring in outside food, he said.

In all, Campbell will develop 20,000 square feet of retail space as part of The Cadence project. Half of that will be in the lower level of the Plaza Centro parking garage, whose top floors will have additional student housing.

Campbell said he has three other tenants lined up, all of them dining-related. Contracts have not been finalized, so he would not name names except to say that two of the businesses are homegrown and the third is coming from Los Angeles.

A bicyclist rides near East Congress Street next to the Rialto Theatre on the downtown site of the planned student housing complex. World of Beer, offering a well-stocked bar as well as beer to go, has leased space on the ground floor of The Cadence.