If your spooky side is longing for something Halloween-esque in the midst of summer, Colossal Cave has you covered.

Once a month, the cave offers ghost-hunting tours and paranormal investigations. The events are hosted by the Haunted Historians, an organization that conducts haunted tours all over Arizona.

“If you’re open to the idea that spirits exist, this is a rich experience for that,” Mike Holmes, Colossal Cave Mountain Park general manager, says. “Doing something like this has always been in the back of our minds, but we didn’t have the expertise to do it. When Haunted Historians reached out to us, it was an immediate yes.”

With more than 1,000 years of life surrounding the cave and another 100 years of tourism alone, Holmes says it makes sense that many people have experienced haunted encounters.

Colossal Cave currently offers two rounds of hour-long ghost hunting tours, followed by a separate 3-hour-long paranormal investigation in and outside of the cave.

During the hour-long cave tour, visitors are able to walk through the cave after dark and, hopefully, communicate with spirits. John Albrecht, Colossal Cave’s designated investigator from the Haunted Historians, provides each visitor with ghostly gadgets such as night vision cameras, audio recorders, a ghost box to help hear the voices of spirits, and K2 meters which spot waves in electromagnetic energy.

According to Holmes, many people in earlier decades are said to have died on the park grounds. Specifically, there is evidence showing the deaths of two Indian boys inside the cave. He says that many people also feel the presence of Frank Schmidt, who is said to have saved the cave and spent a lot of time inside of it.

Additionally, Albrecht says that one reason why the cave tours work is because experts believe that limestone — which Colossal Cave is — helps signal paranormal activity.

As for the haunted encounters that people have experienced, Albrecht says that he’s experienced “phantom smells of the spirit” during previous tours at Colossal Cave. For example, he says that he has smelled the scent of pipe tobacco smoke—which is something that Schmidt loved.

In fact, Holmes says that longtime Colossal Cave employees have all smelled that scent of tobacco at some point—when no one in the vicinity had been smoking.

Other times, orbs are caught on camera. To some, orbs can be an indication of roaming spirits.

One of the employees at Colossal Cave said that she’s had her own haunted experiences in the cave. She described a time in which she saw a man in an off-limits area, and when instructing him to get out of the forbidden space, he didn’t listen. But with a blink of an eye, he disappeared.

Holmes also had a spooky experience when giving a cave tour to a family. After a young girl took a photo of a passageway inside the cave, she looked back at the photo and said she saw a face in the picture. When taking another picture of the same spot, the face wasn’t there, and the first photograph had disappeared entirely.

Coincidentally (or not), both of those experiences happened in the exact spot where one of the Indian boys is said to have died.

During a recent tour, a group of aspiring ghost hunters shimmied into a smaller crevice of the cave. They all held up their ghost-hunting tools and waited in silence for something — anything — to happen.

“You’re going to want to talk to them,” Albrecht told the visitors. “Tell them that if they touch your devices, they’ll light up like Christmas lights.”

When a woman made the conscious decision to step forward, her device blinked a colorful light, just as Albrecht had said.

Later, Albrecht brought out the ghost box—a radio-like machine that produces loud static. But sometimes, after shouting out questions to potential spirits, the machine will produce a word or phrase through the static. It’s said to be a way to communicate with the spirits.

Albrecht shouted, “My name is John. You can tell us your name. Don’t be afraid.”

He also asked the spirit to read one of the words on his Colossal Cave T-Shirt. Through the static and in faint vocals, the visitors said they heard a voice say “cave.”

Later, Albrecht asked, “Frank, is that you?” And the crowd swore they heard a voice saying “Frank.” A series of other questions quickly convinced the crowd that they were, in fact, talking to the spirit of Schmidt.

At the end of the tour, Holmes said, “I can honestly say I heard some things tonight that I can’t explain.” Many of the visitors agreed.

The paranormal investigation is offered later in the evening and takes visitors through the cave and around different areas of the park.

Holmes says that paranormal activity has been picked up many times inside the cave, but that the activity is a lot more spooky on the park grounds — usually around and under the gift shop area.

In the most recent paranormal investigation, visitors said they felt the presence of Joe Maierhauser, who managed the park for several years before passing away in 2007.

“Whether you believe in ghosts or not, the tours are a lot of fun,” Holmes says.

When: First Saturday of every month. The next event will be held on Saturday, June 2. The tours are at 6 and 7 p.m. The Paranormal Investigation is at 8 p.m.

Photos: Colossal Cave came to life in the 1930s

Projects by the Civilian Conservation Corps in Southern Arizona, including Colossal Cave, put many skilled craftsmen to work in the depths of …

4 musical performances in Tucson to celebrate the 4th of July

Nothing says 4th of July like Lee Greenwood, all decked out in his red, white and blue splendor, singing his iconic patriotic ode "God Bless t…

If you haven't been to Colossal Cave in the last couple years, read more to see what you're missing.

Meet Me Downtown on June 2

More than 2,000 runners, joggers and walkers have signed up to hit the pavement in Tucson’s increasingly popular downtown on Saturday, June 2.

UA has plenty of cool attractions for summer

Temperatures are on the rise in Tucson, and here are some choice ways to keep cool this summer at the University of Arizona:

The celebration will include hands-on activities, exhibits, and a show.

4 Southern Arizona ghost tours sure to spook you

Halloween is right around the corner. Ready to get spooked? 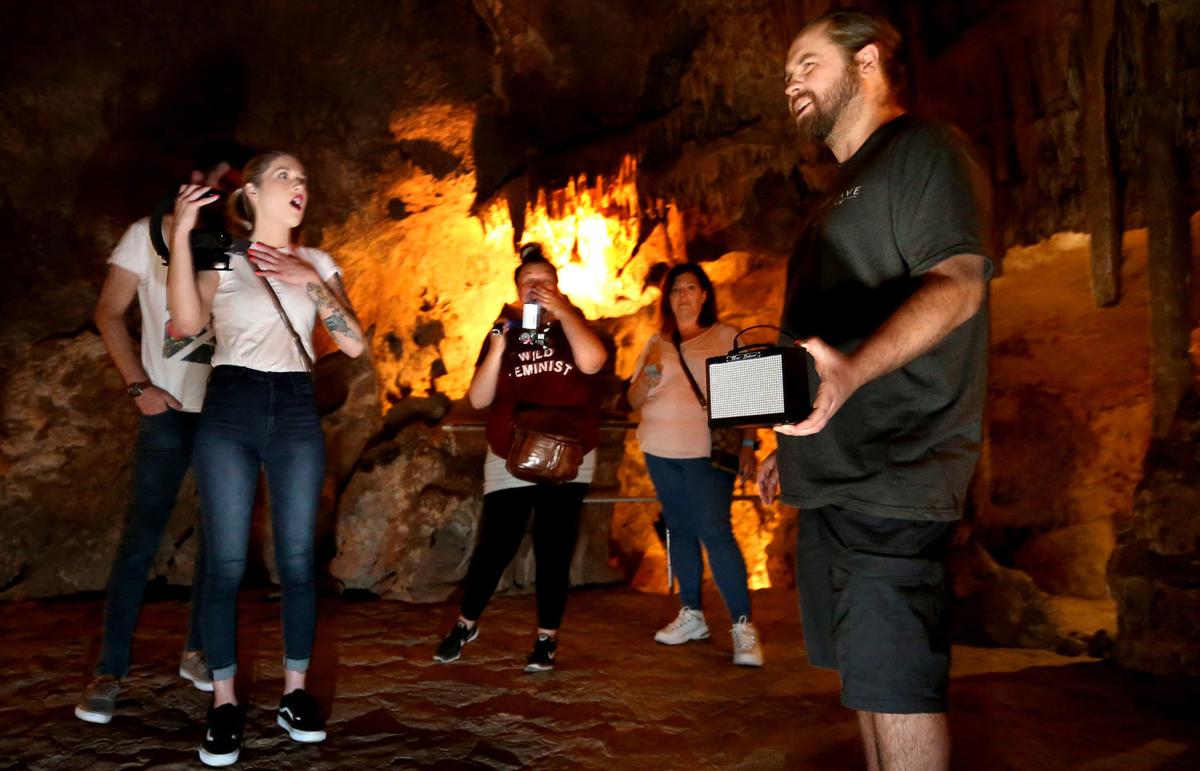 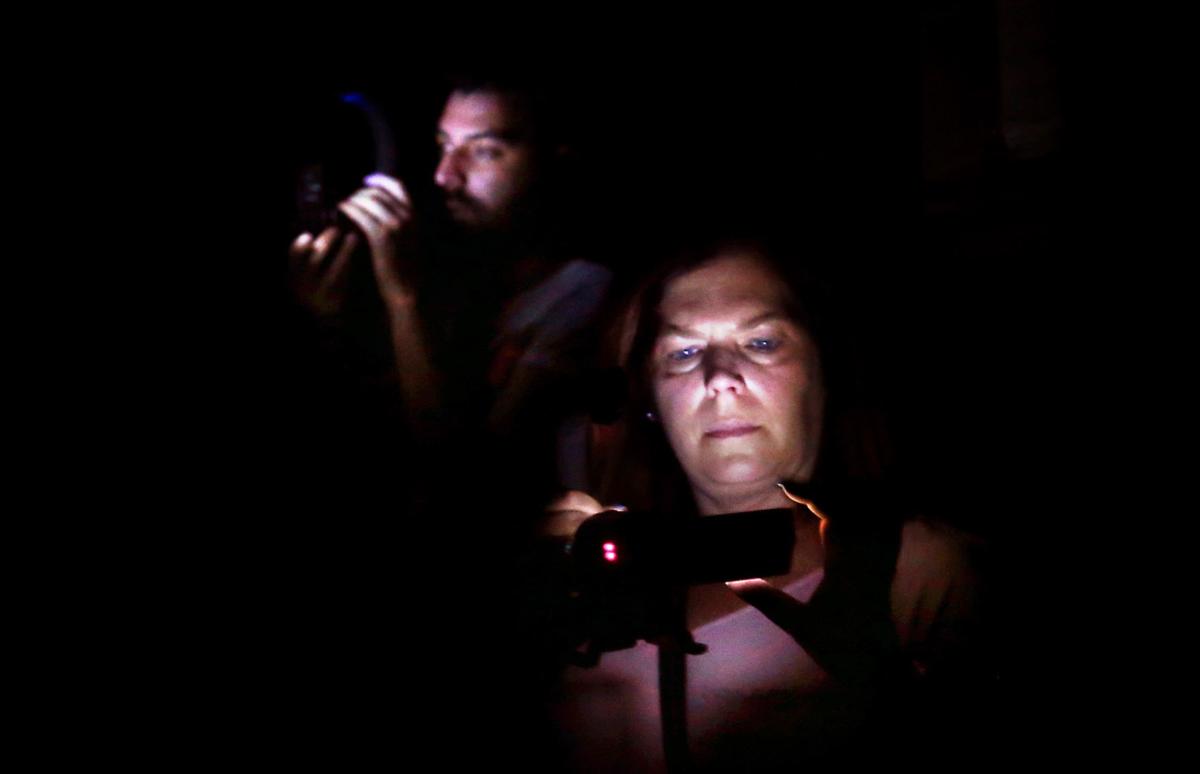 Richard Milbauer, top and Heather Shearer uses night vision modified video cameras to record the Haunted Historians tour of Colossal Cave and the park grounds east of Tucson on May 5, 2018.