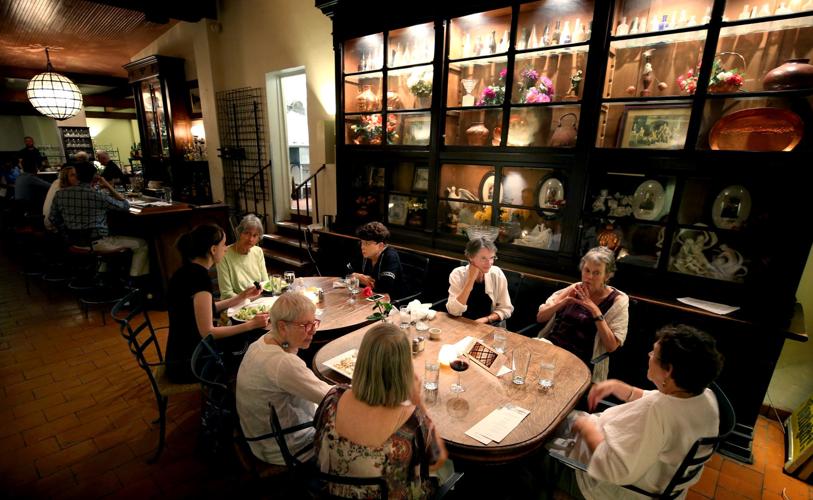 A law bookcase used in 1880s Hermosillo served as a display cabinet at the Cushing Street Bar & Restaurant in downtown. 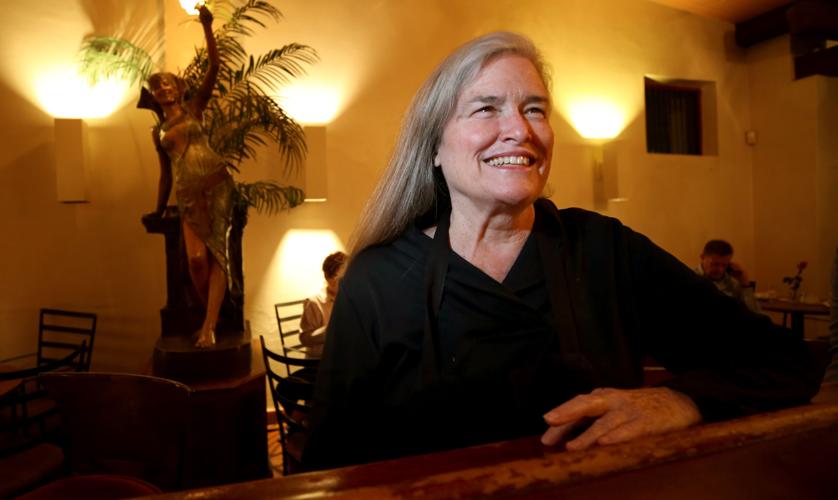 Betsy Rollings has run the restaurant since 2002. Her parents bought the building and other adobe buildings in the area to galvanize opposition to the proposed Butterfield Expressway. “It was a giant political action,” she recalls.

The Cushing Street building was originally a house built in the 1860s. It was later converted to a country store, a tailor’s business and in 1972 a restaurant. The Coronet, a popular eatery on Ninth Street near Fourth Avenue, will move to this site.

Editor’s note: This is another in the Star’s series on the history of some of Tucson’s older restaurants.

The Butterfield Expressway, which would have shortened the route to downtown from the east side, had been proposed in the 1960s. Many homes, businesses, and historic buildings would have been demolished in the process — including what is now the Cushing Street Bar & Restaurant in the historic Barrio Viejo.

So to take a stand and attempt to put a halt to the freeway, Betsy Rollings’ parents, Kelley and Sally, joined three other couples and opened the restaurant in what was originally a house built in the 1860s. They also purchased and restored many other adobe buildings in the area.

“They wanted to bulldoze and take out everything,” says Betsy, who has run the 45-year-old restaurant since 2002. “My parents chose this building for the restaurant because it was next in line for the wrecking ball. It was a giant political action.”

Rollings says that many community members supported her parents’ decision. Not only did they want to preserve a chunk of history, they wanted to prevent the loss of community in the area.

Protests and controversy stirred in the 1960s and continued into the early 1970s. The state finally decided to stop the demolitions in 1972 — the same year the Cushing Street restaurant opened.

But by the time the restaurant opened, much of the downtown area had already been demolished — Betsy says about 200 buildings had been destroyed.

“There was a lot of battle to prevent further destruction of the community’s heart and soul,” Betsy says.

The Cushing Street building was originally a house built by Joseph Ferrin Bloom in the 1860s. It was later converted to a country store and a tailor’s business.

And the patio, with lush greenery lining the walls, used to be a backyard , which was then stacked with nearly 20 junk automobiles.

The Rollings and friends then converted the space into a bar, but much of the history can still be visually seen — adobe walls, an antique chandelier and display cabinets.

On opening night, the bar was packed.

“It was a big hit,” Betsy says. “It was supported because people knew that our goal was to bring people together and stop the destruction. People were happy.”

But plumbing hadn’t been straightened out quite yet, so port-a-potties were the only option. The Rollings later added a separate building to the space which now houses restrooms and a catering space.

At the time, Cushing Street was mainly a bar, but they also served sandwiches, soups, salads, and quesadillas.

“It was just a place where people could gather downtown,” Betsy says. “So much had been torn apart, so this was such a great gathering place for the community.”

It also helps that Cushing Street is adjacent to the Tucson Convention Center, which hosted many big-name musicians at the time such as the Rolling Stones and Stevie Wonder.

About 15 years ago, Cushing Street started to focus more on food. It is launching a new menu in coming weeks that will offer small plates and salads, hearty entrees such as a New York strip and Atlantic salmon, and scratch-made desserts.

Although Cushing Street was built on strife, it didn’t all end there.

Betsy says that road construction and transportation issues have always been obstacles, in addition to the ancient infrastructure of the neighborhood. But it’s nothing she worries about too much.

“If you’re in the oldest part of town, there’s a lot of redoing to do,” she says. “A lot of people downtown have rolled with the punches because the goal is to have things improved. I don’t like to focus on it. I feel as though we still have our restaurant because we do it out of passion — because we love the community.”

Kids can struggle with eating for a variety of reasons.

Editor’s note: This is another in the Star’s series on ethnic markets in Tucson.

Groceries share the space with a restaurant and a meat counter

Hilary Duff is designing a new collection of children’s apparel

A law bookcase used in 1880s Hermosillo served as a display cabinet at the Cushing Street Bar & Restaurant in downtown.

Betsy Rollings has run the restaurant since 2002. Her parents bought the building and other adobe buildings in the area to galvanize opposition to the proposed Butterfield Expressway. “It was a giant political action,” she recalls.

The Cushing Street building was originally a house built in the 1860s. It was later converted to a country store, a tailor’s business and in 1972 a restaurant. The Coronet, a popular eatery on Ninth Street near Fourth Avenue, will move to this site.