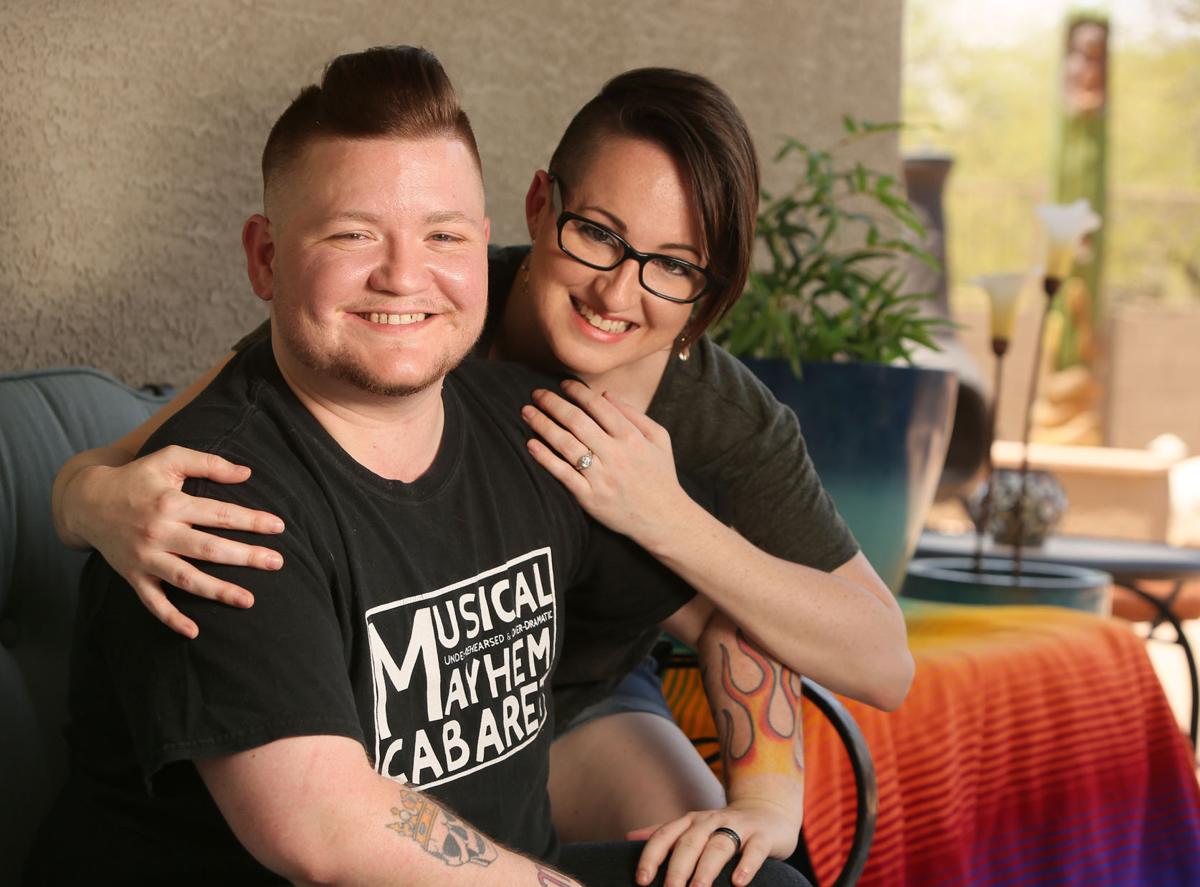 Veteran actor Donnie Cianciotto, shown with his wife, Rebecca, is back in Tucson to do a cabaret show at the Screening Room downtown. 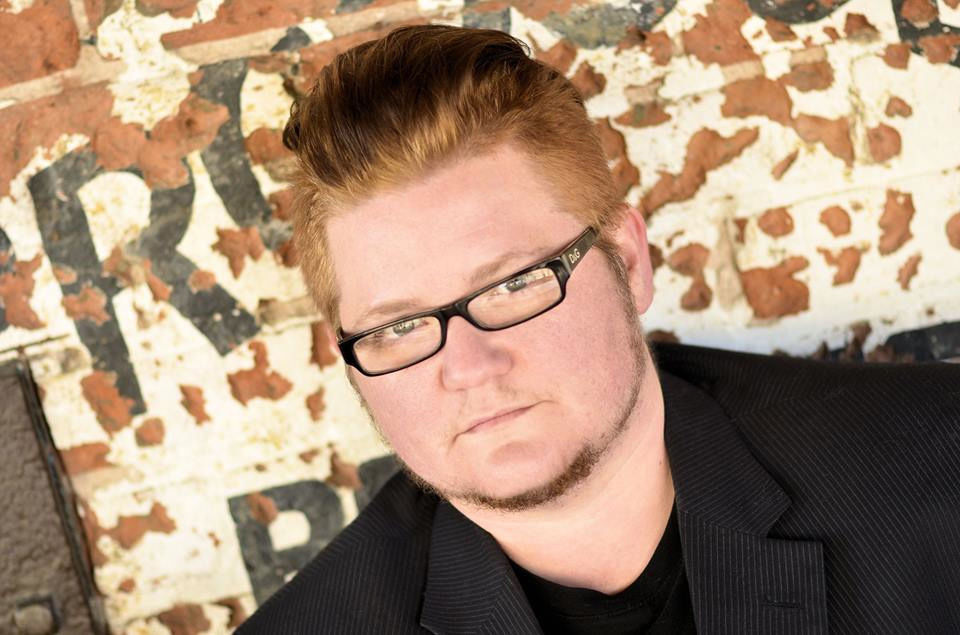 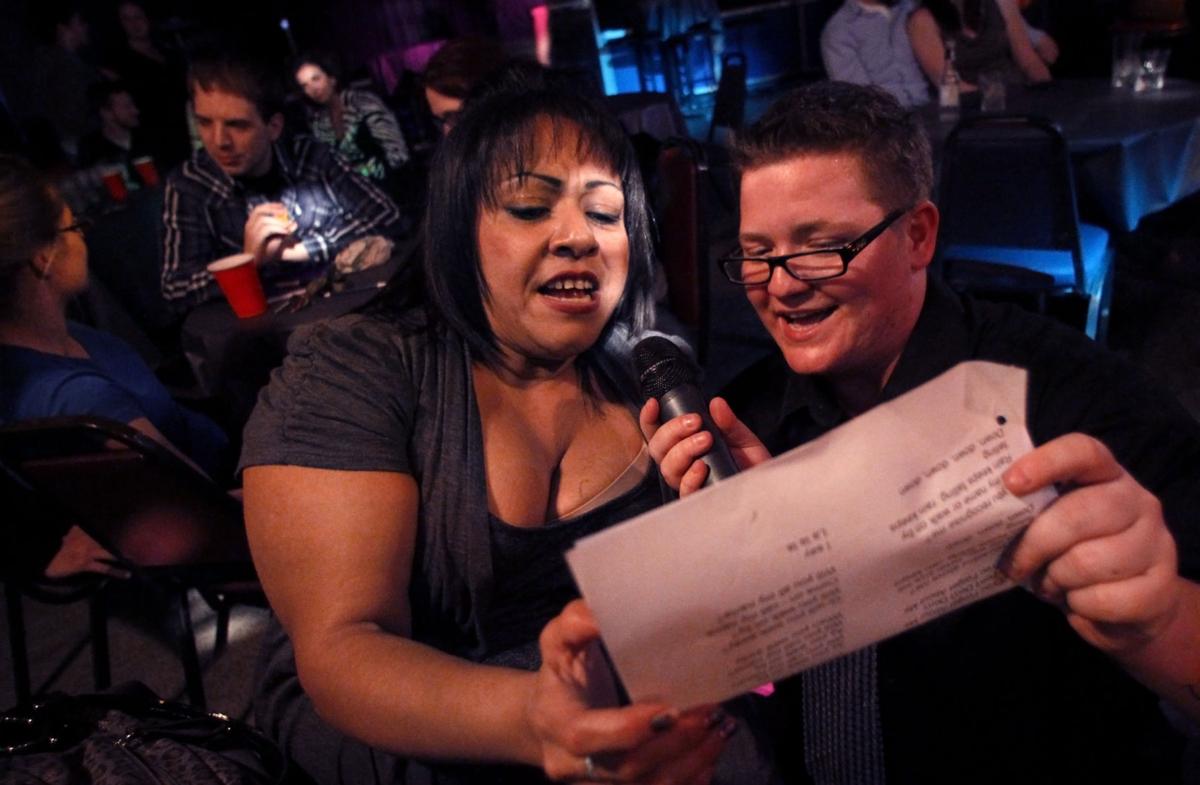 Angie Aguilar gets picked by Donnie Cianciotto of Musical Mayhem Cabaret to sing “Don’t You Forget About Me.”

At 13, Donnie Cianciotto came out as a lesbian .

But in his 20s, when he was cast as a drag king in a show that traveled around the country, he realized that what he was, was a man in a woman’s body.

Then he was given a candid photo of himself backstage while in costume.

“When I saw it, with the fake facial hair on, I thought ‘Oh my God, look at that happy guy.’”

When he was 28, he was able to admit to himself that he was a transgender man. The first time he said it out loud was to a woman he had long dated.

“She thought I was just confused,” he recalls, chatting at a small table at Beyond Bread, sitting up straight, with a trim haircut and scruffy beard.

“She said she didn’t want to date me if I was transgender.”

So he suppressed the thought but began to see doctors and therapists. Then he told her again.

The relationship soon ended. Cianciotto was 31 and he decided to not be afraid anymore and began the transition.

He went on testosterone, which deepened his voice. He began to grow a beard. The hormone also lifted his frequent depression and mood swings.

While he was surrounded by the love and support of family and friends, things were different when he left that protected bubble.

He blames his breasts. They were large — he was a size 40DD — and it was difficult to make them invisible, in spite of the heavy binding and several shirts he wore to hide them.

“It was tough,” Cianciotto, now 37, says. “Nobody knows what to make of you. I got called the bearded lady a lot.”

If he was home and the doorbell rang, he wouldn’t answer it. He was cautious going out in public. “I’d go to a restaurant with my girlfriend and the waitress would say ‘How can I help you ladies?’ That was really damaging. It was like not having your identity validated. … They were just little things, but there were thousands of them that pile up.”’

Breast removal seemed to be the answer.

“That was the big thing,” he says. “I felt better with myself, but the way people perceived me was the issue. Plus I wanted to get rid of (the breasts) anyway.”

He was on Arizona Health Care Cost Containment System (AHCCCS) — the state’s Medicaid system — and began to pursue coverage for the surgery. He was denied.

“They said that there was no proof it was medically necessary. That is not the general consensus in the medical community anymore,” he says.

A lawyer with Southern Arizona Legal Aid took on his case. He went to court three times, and was denied coverage each time. Each denial sent him into a depression.

Then, early last year, Cianciotto got word that New York’s Public Theatre was looking for transgender actors for a production of the musical “Southern Comfort.”

He had been acting since he was 3, around Tucson and the country. And though he was the artistic director of the local Musical Mayhem Cabaret, he had not pursued stage work since he started his transition. He was reluctant to send in an audition tape. “No, I gave this up. Nobody’s going to hire me,” he thought, but still sent the tape.

That tape won him an audition in New York City. Within three days, he was cast in the play. He would be making his off-Broadway debut.

He and his then-fiancee, Rebecca Sweet, quickly moved to Manhattan.

When the show ended, he began to pursue top surgery in that city. He thought his chances of getting coverage there were better.

In New York, HMO and medical facilities are required to provide health services to transgender people on Medicaid. That includes the surgery Cianciotto desperately wanted and needed.

“Even though it’s required, the HMOs are able to make up their individual requirements,” he says.

“An HMO can say ‘Well, you need 16 letters from doctors, and you need to give me two tickets to ‘Hamilton.’ They make it impossible,” he says, exaggerating some to make his point.

He was denied again.

“It was a huge blow,” says Cianciotto. “It was devastating. I was depressed, suicidal. I didn’t know what to do with myself.”

The breasts, he knew, were impacting his acting as well as his body and his psyche. He found that the first thing he thought of on stage was whether or not they were concealed enough, if the audience was looking at his chest rather than becoming absorbed in his character. He had long been a professional actor; he knew that he needed to concentrate on the role.

He again appealed the decision.

Not long after, he was on a subway train going to rehearsal for another play when he was assaulted.

“He started calling me Bruce Jenner, which didn’t make any sense, and any other slur he could think of. It was like my worst fear coming true.”

Cianciotto decided he couldn’t depend on insurance companies for help and started a GoFundMe campaign to raise the close to $10,000 needed for the surgery.

“In the span of about six hours, we raised $9,000,” says Cianciotto, still in a bit of shock. More than 250 donated — relatives, friends and strangers. That same day, he got his final denial for insurance coverage for the surgery. This time, depression did not set in.

At the end of January, he and his now wife, Rebecca — they married quickly after the presidential election, fearful that their right to marry would be thwarted by the Trump administration — headed to Baltimore, where the surgery was less expensive than it was in New York.

Two weeks later, home in New York, he posted a photo of himself, bare chested. “Fifteen days post-op and I’m feeling more myself than ever,” he said.

Anxiety disappeared. Depression did, too. He went out in public with a new ease.

“It was like a switch lift,” he says about post-surgery, stressing that he is proof that the procedure is medically necessary.

“A calm came over me. I started smiling in pictures, I can throw on a T-shirt and leave my house. I remember what confidence felt like. It was like having parts of my life back that I hadn’t even realized I had lost. The surgery has allowed me to just be.”

This week, Donnie Cianciotto is in Tucson visiting friends and family. Sunday night, he gives a cabaret performance that he hopes will evolve into a show that will make its debut at the famous Joe’s Pub at the Public Theatre in Manhattan. It will include music and stories about the hardships and victories he has faced since he began his transition.

Eight new murals in downtown Tucson are part of the City of Tucson Mural Program, in conjunction with Tucson Arts Brigade.

'Same Time, Next Year' follows an affair that we can't help but admire

Veteran actor Donnie Cianciotto, shown with his wife, Rebecca, is back in Tucson to do a cabaret show at the Screening Room downtown.

Angie Aguilar gets picked by Donnie Cianciotto of Musical Mayhem Cabaret to sing “Don’t You Forget About Me.”