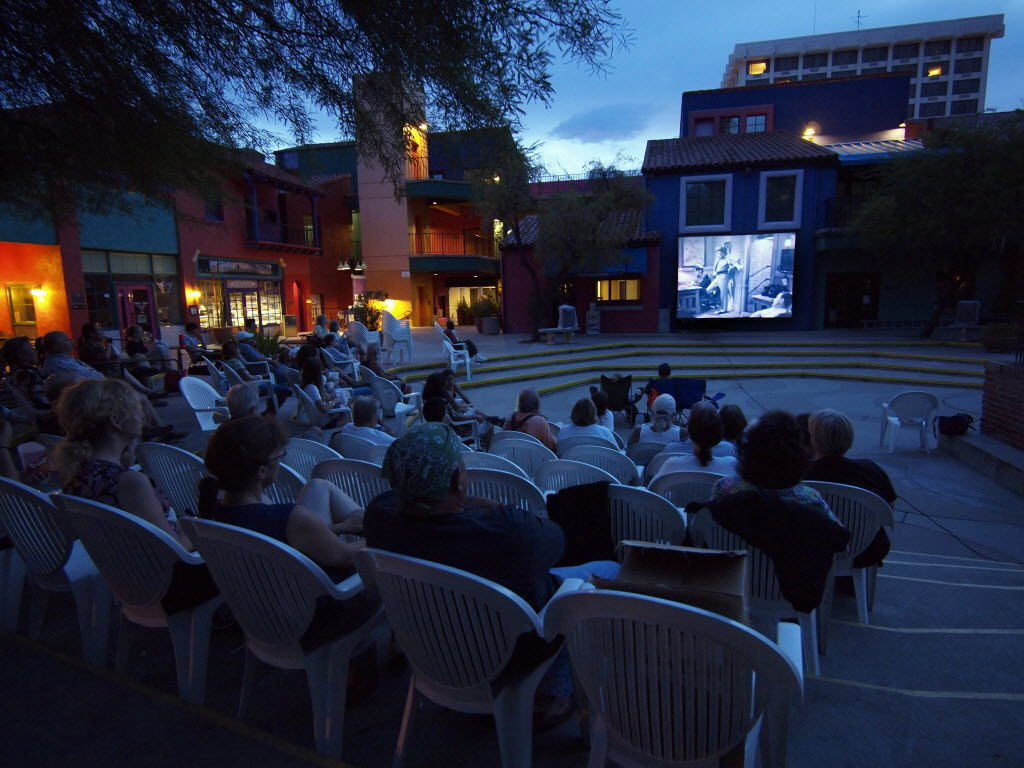 Cinema La Placita is starting its 17th season at La Placita Village this week but will finish it at a new location. Audience members will decide the June schedule, says founder Erika O’Dowd. 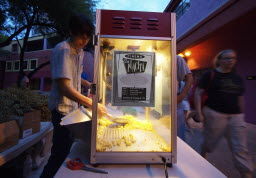 Popcorn is included in the $3 cost of admission at Cinema La Placita.

The Cinema La Placita outdoor film series kicks off its 17th season Thursday, May 5, with “When Harry Met Sally” at La Placita Village.

In June it will move to a new home at the historic Pima County Courthouse to keep ahead of changes—including possible demolition—planned at La Placita, 110 S. Church Ave. at Broadway.

Erika O’Dowd, who founded the nonprofit outdoor film series, said she was sad when she heard it needed to find a new home. “Then when the prospect of the Pima County Courthouse came along it made me really excited,” she said.

The weekly film series will continue at La Placita through May 26 — which will be a special “bring your dog night” for the screening of “Best in Show.”

“My husband got really nostalgic and he wanted a last hurrah,” O’Dowd explained. “We met there.”

O’Dowd and husband Josh Pope have also involved their 9-year-old daughter in the summer series. “She’s been scooping popcorn with us for a couple summers now.” Popcorn is included in the $3 admission, and all proceeds go directly to series programming.

Other people have also met, had their first dates and gotten engaged during the screenings in La Placita’s courtyard.

A strong fan base has grown over the years, said O’Dowd, who can count on at least 100 to 125 regulars attending every Thursday. She wanted everyone to have a month at La Placita before the move.

The series will take a week off and then resume June 9 at the courthouse, and run through Aug. 25. All films begin at 7:30 p.m. each Thursday.

This month Cinema La Placita is accepting votes by audience members and on its Facebook page to decide the June schedule, said O’Dowd.

“I’m excited about the new location because it’s gorgeous and it’s nostalgic, but I’m a little sad. I’m going to miss La Placita. We’ve been there for 16 years,” O’Dowd said.

The new venue will offer improved amenities such as wheelchair accessible bathrooms and a historic setting with nearby on-street parking, O’Dowd said.

It turns out O’Dowd also has a special connection to the iconic domed courthouse. “My great great uncle was Roy Place, architect of the courthouse,” she said. “It makes me happy. It’s gorgeous there.... It’s such a nice space to be in.”

Falling in love with Tucson

Need some romance? Write a love letter to the Old Pueblo.

La Placita Village just one of many ideas for more downtown living.

I Dream in Widescreen: UA film students ready for their close ups

Movies in a Minute: 'One Night in Miami'

Movies in a Minute: 'One Night in Miami'

Movies in a Minute: "One Night in Miami"

Movies in a Minute: "One Night in Miami"

Cinema La Placita is starting its 17th season at La Placita Village this week but will finish it at a new location. Audience members will decide the June schedule, says founder Erika O’Dowd.

Popcorn is included in the $3 cost of admission at Cinema La Placita.