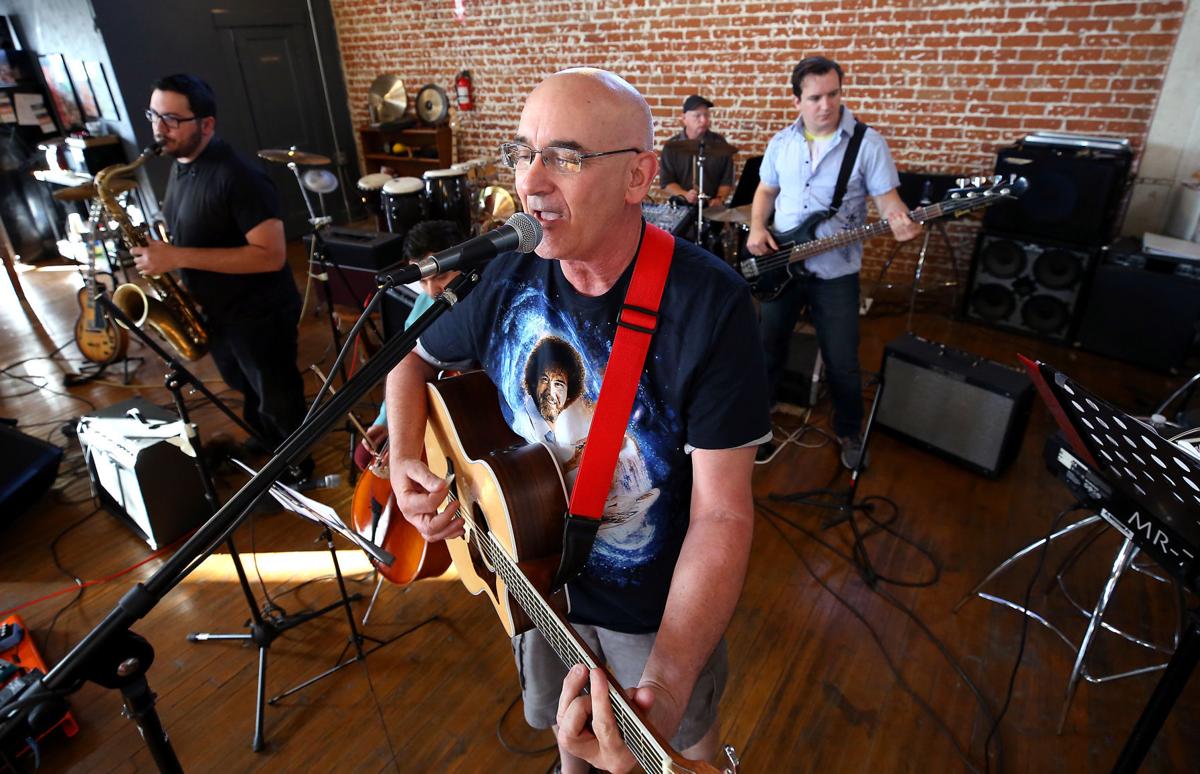 Jim Kloster sings during a SQWRL rehearsal. The rock ’n’ roll band is having a CD release party April 28 at Club Congress. 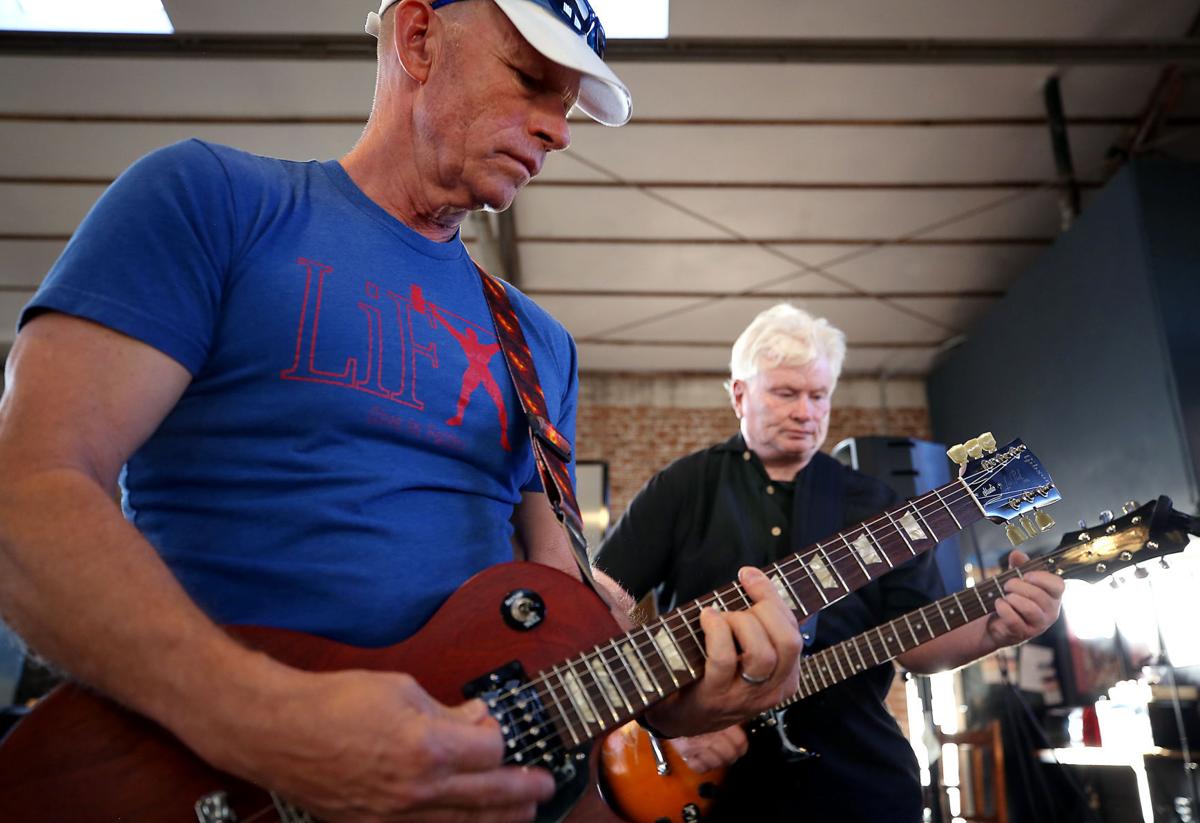 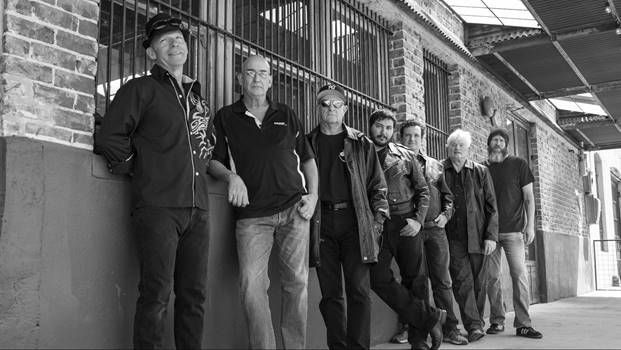 From nearly the first day Sinfonia HealthCare Corporation opened for business in early 2013, a group of medical executives have toted guitar cases along with their briefcases into an old warehouse at 1 E. Toole Ave., a stone’s throw from the railroad tracks and downtown’s bustling nightlife.

They set up their guitars and drum set, keyboards and amps in the main office at the headquarters of what’s become a nationwide home-health-care company. And every Wednesday night and Sunday morning, the small group of 50- and 60-somethings loosen their ties and rock out like teenagers.

At first, it was a way to relieve stress. Lead singer and University of Arizona pharmacist Jim Kloster liked to call the budding musicians “hobbyists.”

Then they started playing in public, small affairs, mostly at fundraising events and community festivals including the monthly Second Saturdays Downtown, and never for money.

“Guess what? We’re pretty good, so people started inviting us to play and we started developing a fan base,” Fletcher McCusker, Sinfonia founder/CEO and the band’s de facto leader, said last week as the band — SQWRL — was preparing for the biggest gig in its four-year career: the release of its debut CD “When I’m Trying.”

“We never really fashioned ourselves as anything other than a company band,” McCusker said, until a German music fan in the audience at the Hotel Congress 2015 HoCo Festival handed them a business card.

He runs the online Cactus Rock Radio station in Germany, and his playlist is a who’s who of Tucson rockers from Calexico to Howe Gelb and Rich Hopkins. He liked SQWRL’s sound, he told them. Did they have a CD? Did they do original music?

But the fan said he was sure that if they ever recorded original music he could book them gigs in Munich and other German cities. Germans love desert rock and Arizona bands like Gin Blossoms, Calexico, Giant Sand, Rich Hopkins & Luminarios, and Brian Lopez, the newest hot musical import from Tucson.

“We all work for a living and have very important jobs,” he said, “but we’re really passionate about what we’ve been able to put together.”

Secretly, though, they each probably gave more than a passing nod to the notion of writing music and putting out a record. Each of the members — McCusker and Tony Whitaker on guitars; Kloster singing lead and playing rhythm guitar; Sinfonia CFO Michael Deitch on drums; and Chief Medical Officer Dr. Christian Moher on keyboards — had dabbled in bands in their youth and were pretty accomplished musicians. But life called and they answered.

“Music has always been a belief, not a career,” McCusker said.

Weeks went by, then months. And then one day in early 2016 at their weekly Wednesday jam session, they mused aloud about the songwriting idea planted by that German music lover. What the heck, they all agreed.

“We kind of had a bucket list, especially Fletcher,” Kloster recalled. “He lit the fire under us. He said we really need to have original songs.”

Each member of the band, which also included newcomers Zach Corvera on sax and Mike Ion on bass, wrote a song or two, drawing heavily from their ’70s and ’80s radio-rock influences.

Corvera and Ion, who both graduated last December from the UA’s Fred Fox School of Music, added a youthful element including penning the album’s title song.

They spent weeks learning to play one another’s songs and tweaking and innovating each one until the band felt the songs fit into their overall idea of creating radio-ready music.

At one of those rehearsals, longtime Tucson record producer Jim Pavett, who runs the state-of-the-art Allusion Studios, stopped by. McCusker had reached out to him earlier about recording the album, but Pavett wanted to hear for himself exactly what McCusker meant when he described the band, whose name was inspired by “Dug,” the talking dog from the Disney animated film “Up.”

Pavett said he sat back and listened awhile, then worked with each musician individually, suggesting changes in their pitch, tempo and conviction of play. Kloster said the tweaks were invaluable; Pavett heard and saw things that Kloster and his bandmates would never have known to look for.

By the time SQWRL entered Pavett’s studio a few weeks later, everyone was on the same page, the record producer said. They laid down each track individually — the scratch vocals, guitars, drums and keyboards — and when they were finished, Pavett worked his magic in the studio.

“I think the overall way that the album came out really created a vision that they we’re looking for,” Pavett said. “We started from one spot and we got it across the finish line. It was great.”

The album is guitar-driven rock with flashes of Southern rock-infused jump blues on “I Ain’t Asking Anymore” and hints of rockabilly on the toe-tapping “Bad Drunk Good Hangover.” “Nicole” will remind you of those 1970s power ballads fused with classic Doors.

“When I’m Trying” drops on iTunes and Spotify on Friday, April 28, the same day that SQWRL is headlining a CD release gig at Club Congress, 311 E. Congress St. The free show starts at 8.

Whether the album will lead to a tour of Germany is a mystery for now. McCusker said they plan to send that kind man in Germany a copy.

“We’ve had a lot of interest in the album,” he said. “We’ll see what happens. We have no idea where it will go.”

“Whatever happens happens,” added Kloster, who moved to Tucson in 1983 from Indiana after finishing his pharmacy degree. “I don’t have any expectations. We’ll see what happens. I think we put together a pretty good product.”

Cost: Admission is free, 21 and older only.

The arena-rocker "Roadrunners Rock" off SQWRL's CD "When I'm Trying" will have you fist-pumping at Tucson Arena when the Tucson Roadrunners hockey team takes to the ice.

"We had this one ambition, a very simple one: Create a song for the Roadrunners and hear it played at the arena," said University of Arizona pharmacist Jim Kloster, SQWRL's lead singer.

The band's founder and guitarist and Sinfonia CEO Fletcher McCusker said the band sent a copy of the song to the Roadrunners, which adopted it as their theme. Snippets of it are played during games and fans often shout the "Roadrunners rock!" refrain.

McCusker is chairman of the Rio Nuevo District board and helped bring professional hockey to Tucson last fall.

Tucson No. 7 when it comes to music fans

While tunes are in abundance, it is the workshops, especially for kids, that is the focus of the annual event

Program explores the deep Mexican and Mexican-American roots in rodeo.

Donations pour in from fans and help band save European tour.

Jim Kloster sings during a SQWRL rehearsal. The rock ’n’ roll band is having a CD release party April 28 at Club Congress.