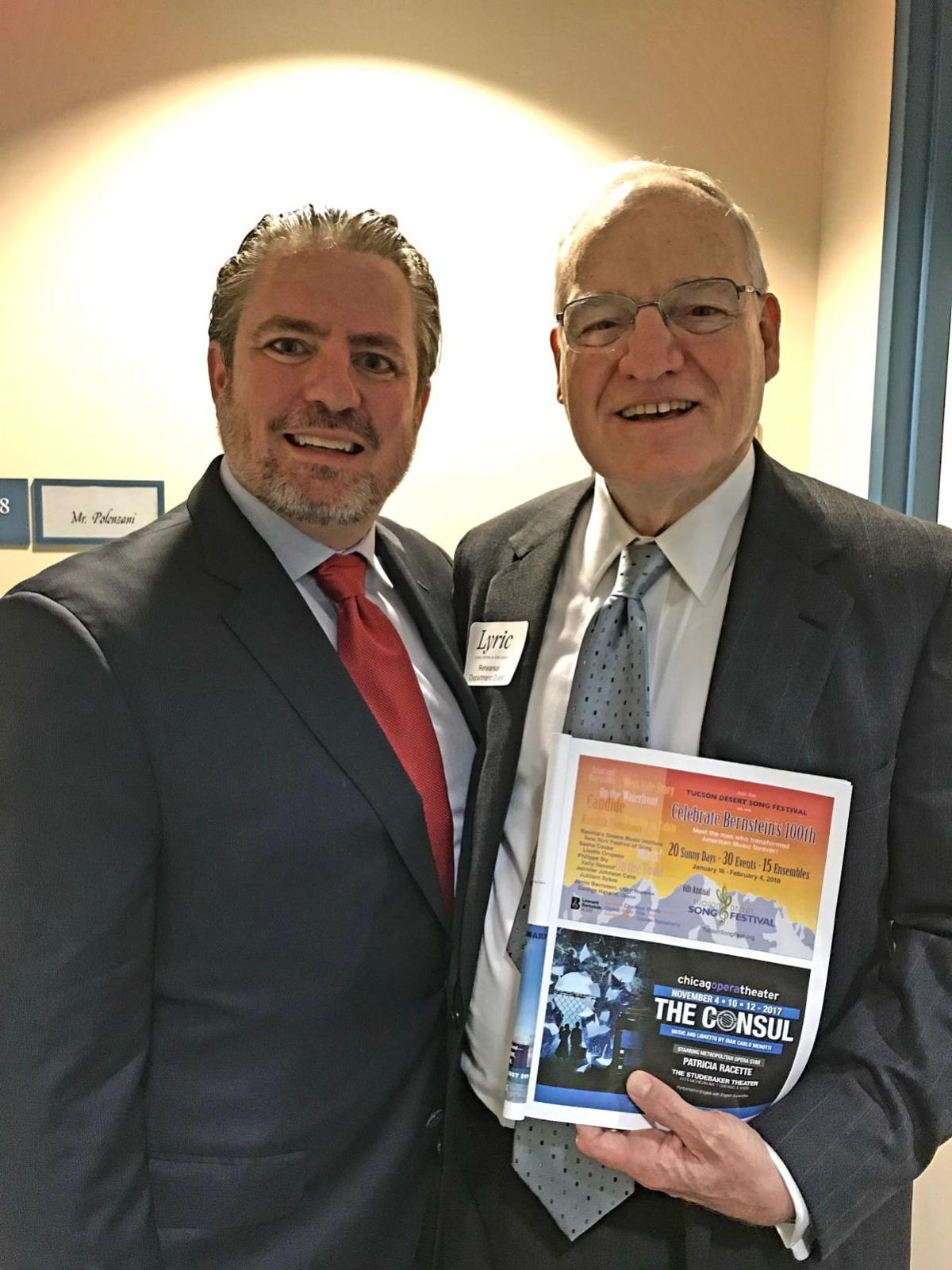 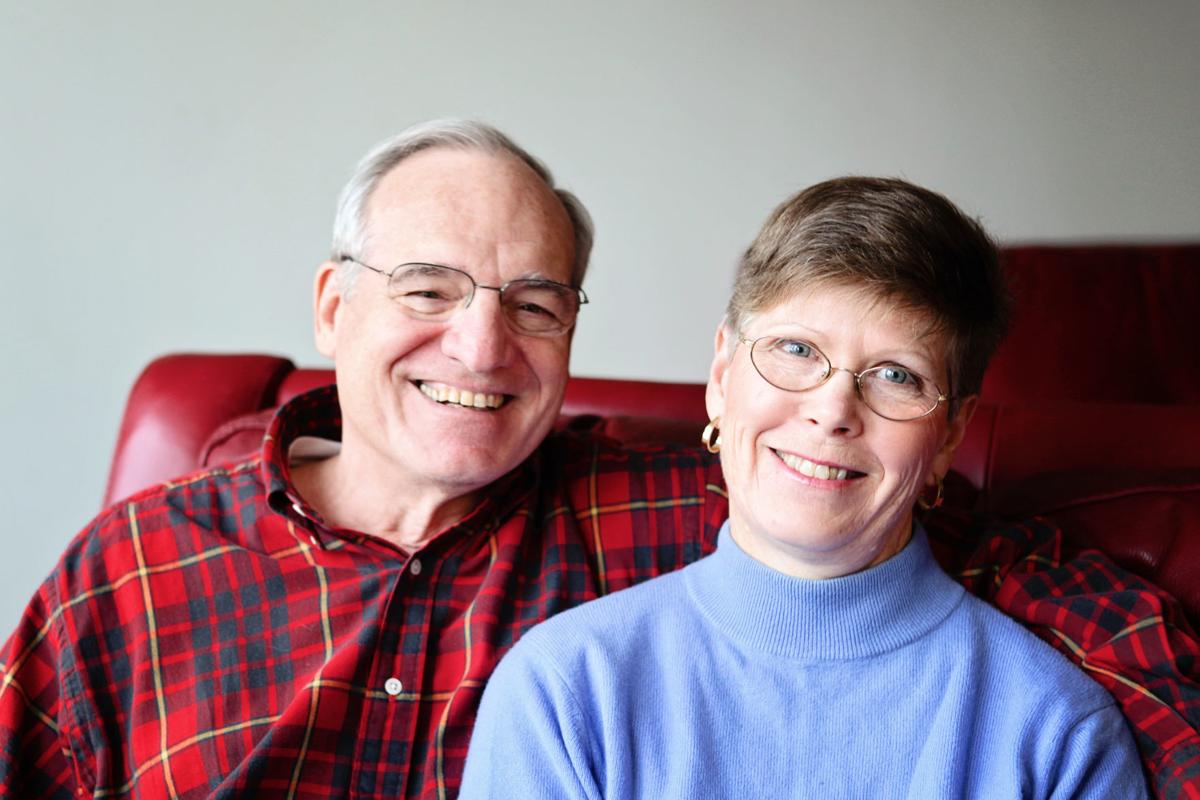 Jack Forsythe, pictured with his wife Terry, grew up on Chicago’s south side, fell in love with classical music in the late 1960s and moved to Tucson when he retired.

Jack Forsythe was sitting on the back porch of his Dove Mountain home one sunny day in early January, sipping a nonalcoholic beer and nibbling cheese and crackers.

His back hurt, his body ached and the cancer that he had been battling for more than a dozen years seemed to be getting the better of him.

But as the conversation shifted to the upcoming eighth annual Tucson Desert Song Festival, Forsythe perked up. He sat up straighter, smiled through the pain and his voice took on a lively animation, as if just the mention of seeing world-class singers on Tucson stages had restored some of the strength and vitality that the cancer was stealing away.

“I just want to live long enough to see the 10th anniversary festival,” he said. “I’m going to come through this the best I can, but I’ve been fighting this for a long, long time.”

Forsythe’s fight came to an end on April 29 when he died at Banner-University Medical Center. He was 72.

“Everything just ganged up on him at the end and he couldn’t fight any more,” said his wife of 50 years, Terry Forsythe.

Forsythe, who grew up on Chicago’s south side, fell in love with classical music in the late 1960s when he was studying for the law school entrance exam. He took a music appreciation class at Loyola University and was hooked.

He never took the law school test, but he soon started compiling a record collection of the greatest works in classical music, including vocalists. After listening to a recording of the famous soprano Maria Callas, he became enamored with art songs.

“He fell in love with her voice and the songs,” his wife recalled. “Every chance he got he would buy another album of something or another. At that time he was mostly interested in opera.”

His love of art song led him to form the St. Paul Summer Song Festival in Minnesota, where the couple lived before Forsythe retired from a career with Ecolab in 2006. He had intended to retire five years earlier, but the company begged him to stay. His wife said Forsythe agreed on the condition that the company provide seed money for the St. Paul festival, which ran from 2002 to 2006.

When the couple moved to Tucson in 2007, Forsythe joined the Arizona Opera Board and almost immediately started spitballing ideas for a similar song festival in Tucson, where he and his wife spent their winters before returning home to Chicago in the summer months.

“Jack would think about this night and day,” said Jeannette Segel, who sat on the Arizona Opera board with Forsythe and is now president of the song festival board. “His imagination and his mind was constantly stirring around ideas about the festival. I think when he was sleeping ideas were coming in his mind.”

“Immediately I was struck by this man who seemed larger than life with this business pedigree that was pretty remarkable and here he is talking about singers and song repertoire as if he has a doctorate in music,” Holtan recalled. “And he had this huge vision for this song festival. I fell in love with the guy right away.”

Segel, a former professional opera singer who replaced Forsythe as board president last year, said Forsythe would “call us maybe a couple times a week and he would be on the phone a long time with us. But he would just go on and on and he would think of what he wanted to do and the artists he wanted to bring.”

One of those artists was the world-class tenor Matthew Polenzani, but it took the festival years to land him due to scheduling conflicts. Polenzani was the marquee headliner of the Desert Song Festival’s inaugural Jack and Terry Forsythe Recital Series in January, performing a sold-out concert at University of Arizona’s Holsclaw Hall with Forsythe in the audience. He sat five or six rows from the stage with his wife and son, John, and was smiling ear-to-ear throughout the 90-minute recital.

Segel said the song festival plans to honor Forsythe at the 10th anniversary event. He also will be remembered at the ninth annual festival in 2021 along with Dorothy Dyer Vanek, a longtime festival supporter and classical music patron who died in late March.

Forsythe had participated in some of the planning for those two festivals. Days before he took a turn that landed him in the hospital two weeks ago, he phoned into a festival board meeting.

“That was Jack,” Segel said. “He would call up and you could hear when he started talking about the festival, his voice would get stronger. He was pulling strength from somewhere. It was the thing, I think, that sustained him in the very end and kept his mind off his inevitable death.”

In addition to his wife and son, Forsythe is survived by his daughters, Elizabeth Marie Keaton and Carolynn Anne Ahlstrom; eight grandchildren; and his brother, Jeffery Allen Forsythe.

A Mass of Christian Burial was celebrated at Oro Valley’s St. Mark Catholic Church last week. A memorial service will be held in Tucson once COVID-19 social distancing restrictions are eased.

Some theater educators in town have taken to rehearsing students virtually for the always-anticipated big spring production. And they are mounting the plays the same way.

The idea for UA's Virtual Theatre Lab, geared toward local high school students, was born during coronavirus isolation. It could expand to a state or national program, assistant professor says.

Three years in and Song Festival poised to become destination

Architects of annual event compare its potential to that of Sante Fe Opera.

Tucson song fest to hit the Chicago airwaves this month

Southern Arizona high school students will be honored for their musical theater skills during a live-stream event Saturday, May 16.

A savings program hopes to encourage attendance at local museums, cultural experiences and other attractions once coronavirus restrictions have been lifted.

Jack Forsythe, pictured with his wife Terry, grew up on Chicago’s south side, fell in love with classical music in the late 1960s and moved to Tucson when he retired.