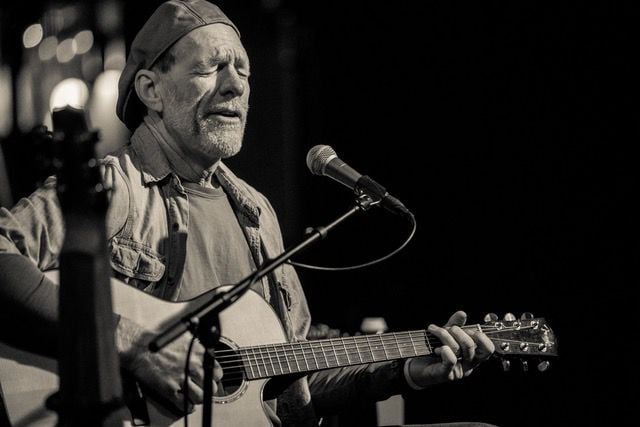 Zoom is the platform of choice for schools and universities in the age of COVID-19.

But if Tucson folk singer J.D. Loveland has his way, it will also be the virtual stage of choice for artists who want to replicate the feeling of performing before a live audience.

“Zoom is the next best thing to being there. You are right there,” said Loveland, who in May launched his Zoom Entertainment Network, ZEN for short.

Since his launch, Loveland, who moved to SaddleBrooke two years ago after retiring from a San Diego nonprofit organization, has produced well over 100 “Zoomcerts” including a series for the Inn at Civano boutique hotel. Artists come from throughout the country but mostly from his native California and Arizona.

Loveland said the artists invite their friends to “attend” their concerts and Loveland sends them a Zoom invite to get in the door. Most of the audience members stay for most of the nearly two-hour show, which usually features several acts on the lineup.

“There are multiple windows open at any given time and you could actually see the people you were playing for,” said Phoenix Americana singer Eric Ramsey, a Zoomcert regular who also plays Tucson’s Monterey Court. “It is not unlike playing for an actual live crowd in that regard.”

Loveland said the Zoom platform allows you to invite as many as 300 people to join. He charges no admission and encourages artists to set up virtual tip jars.

Loveland said he hasn’t figured out a way to monetize his concept, even as he admits the cost of producing the shows is financially taxing. He invested heavily in the startup costs to buy the camera and audio equipment to host the shows, which he advertises on his Facebook page (facebook.com/ZoomEntertainmentnetwork).

Occasionally Loveland performs during the Zoomcerts, but mostly he emcees the shows. It’s not exactly the musical role he intended for himself when he retired.

“Music was going to be be my retirement plan,” said the 70-year-old Loveland, who pursued music as a career from his teens through his late 30s and also flirted with an acting career in Hollywood. “I came to Tucson and it’s quite a big music community. I connected with the folk festival and I played in festivals and I was playing in nursing homes and restaurants.”

But that came to a crashing halt early this year with the coronavirus pandemic. All the venues closed and Loveland found himself following in his music colleagues footsteps to virtual stages. He was one of the founding performers on fellow Tucson musician Bill Brecht’s Desert Southwest Open Mic and both men market one another’s sites. Often their artists cross over on both platforms.

In addition to Facebook, Loveland also tried his hand at streaming concerts through Skype and other platforms, but none stood up to the Zoom experience.

“Here I am sitting in a room playing to a camera and the only way I can tell if anybody’s watching” is to monitor the number of likes and comments, he said of his Facebook experience.

Loveland also discovered that audiences on Facebook tend to “surf” right through live shows as they would TV channel surfing.

“Whenever I would do a live stream on Facebook I would notice the numbers of people watching would fluctuate every five seconds,” he said. “When I first started live-streaming through my Facebook page, I would be able to look through my analytics and for every thousand views, 60% of them were (for) under 60 seconds.”

With his Zoom Entertainment Network, the audience is on the platform with the performers and can applaud and react similar to the way they would in a live setting. And the audience, most of them invited by the artists, tend to stick around for most of the show.

The events serve a similar mission — to promote restaurants — at a time when it's predicted that Arizona could lose as many as 40% of its locally-owned eateries by year's end because of the coronavirus pandemic.

With a slew of art studios, maker spaces and creatives living in Tucson, the Old Pueblo may be on its way to becoming a maker city — if it isn't already one.

The health department said Arizona will add a higher number of new cases over the next two days. "This is a result of advancements in testing, and includes recently classified positive antigen cases dating back over the previous several months."

Events for the 47th annual Tucson Meet Yourself will be held virtually and in-person in an effort to comply with COVID-19 guidelines. And yes, there will be food.