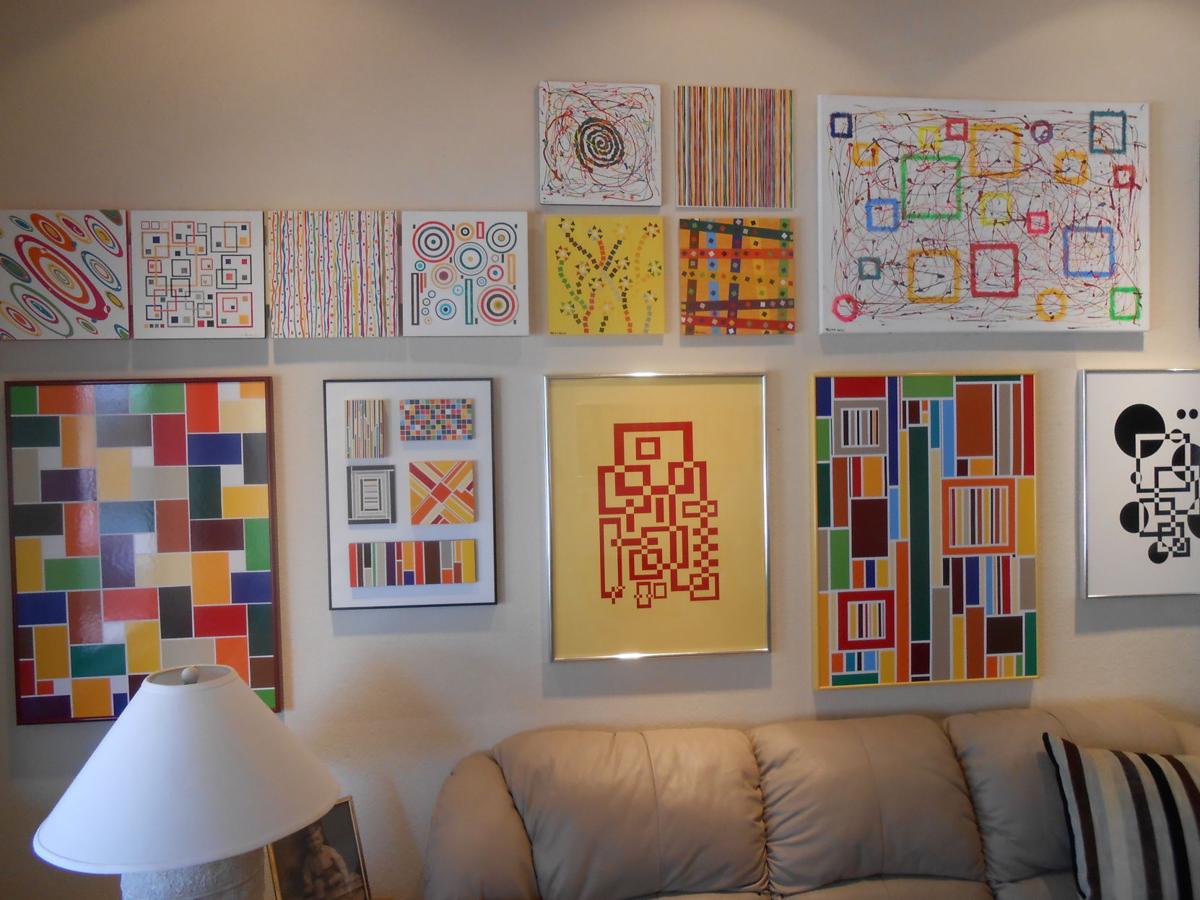 Robert Kitt hopes to open a pop-up gallery to show off his artwork. 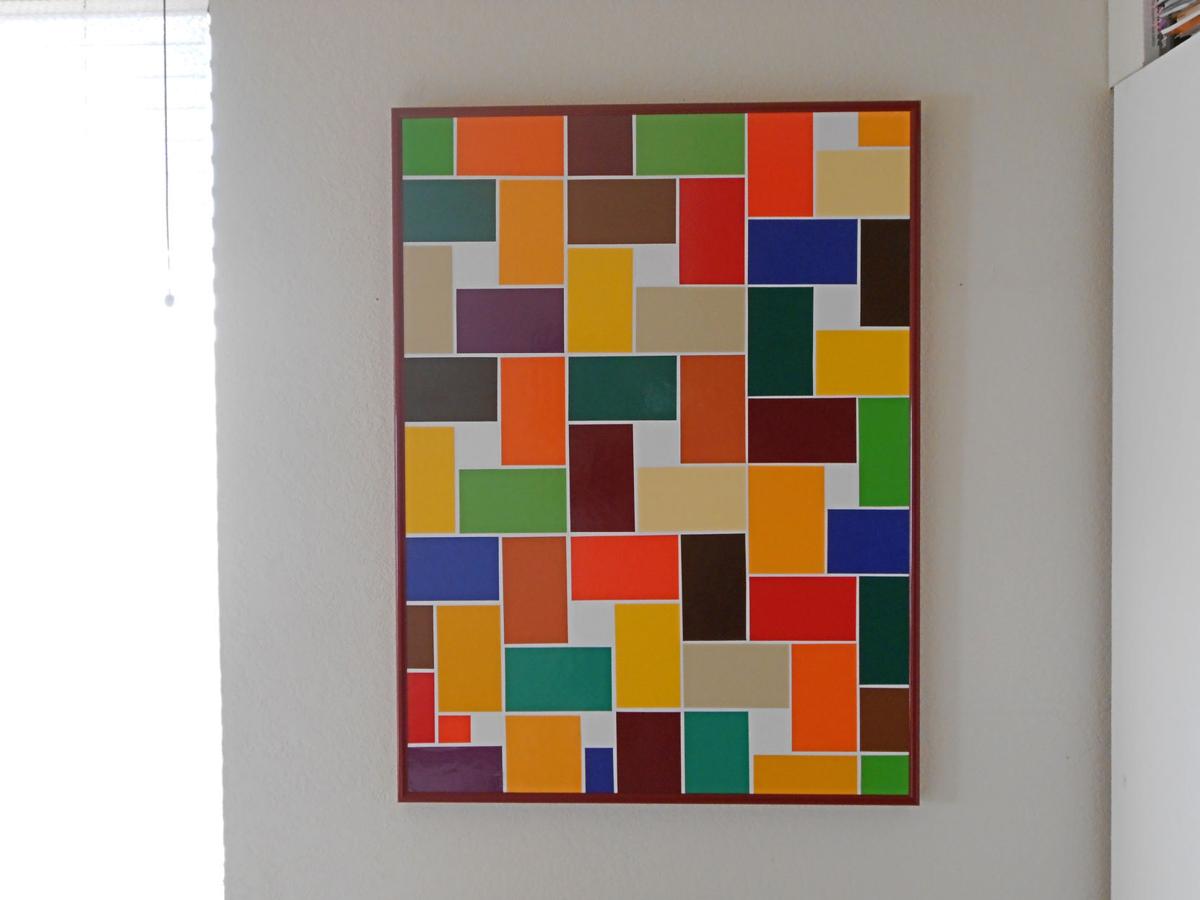 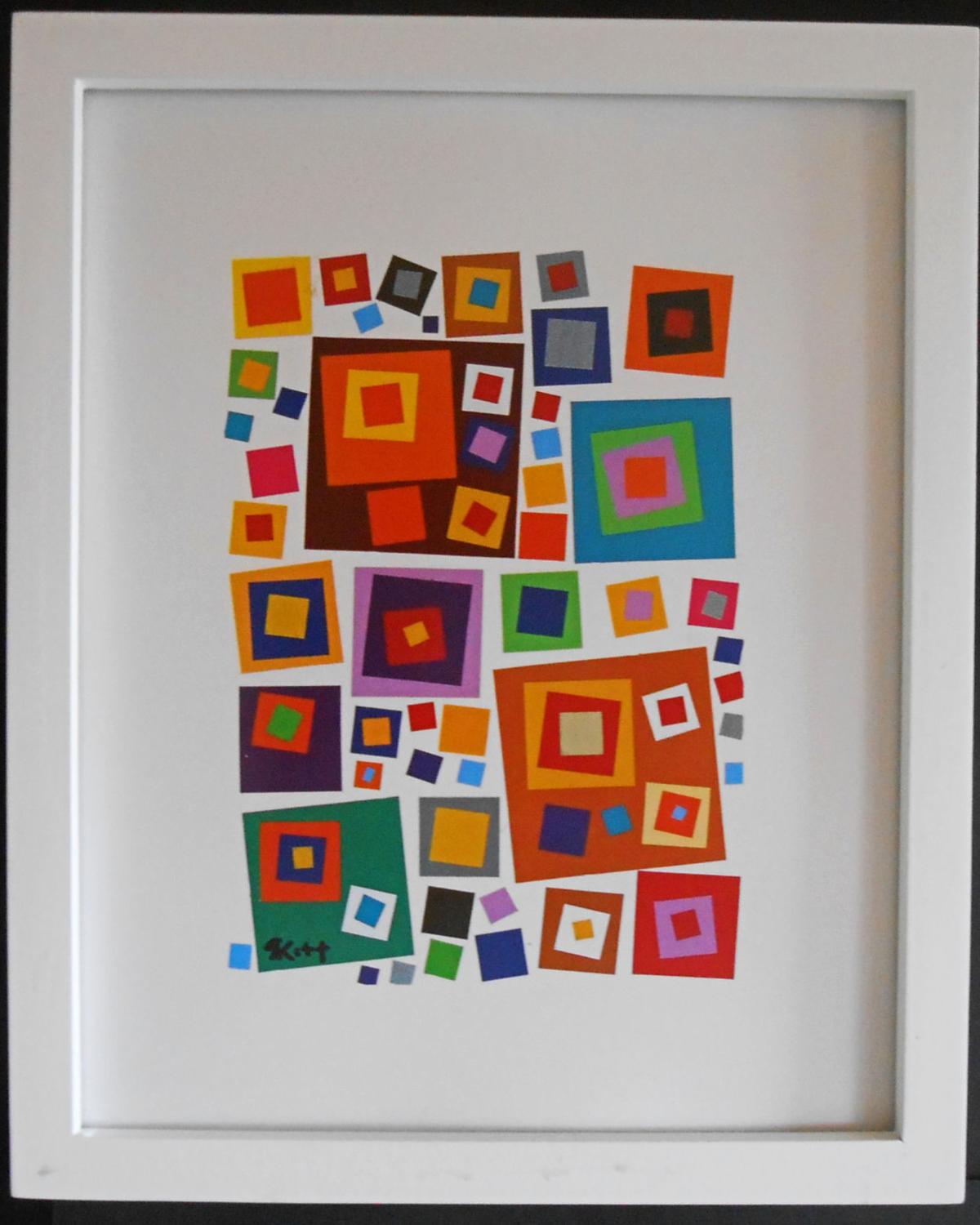 Among the mediums that Robert Kitt uses is colorful vinyl that he cuts by hand. 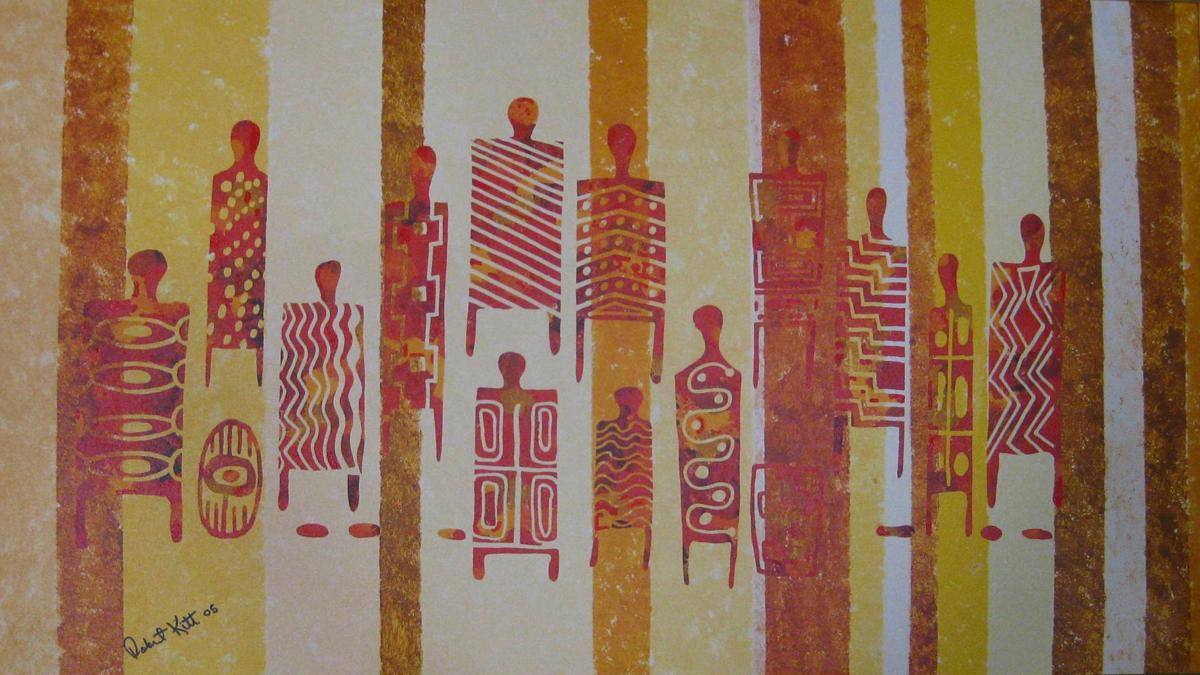 All of Robert Kitt’s paintings are done with sponges.

Robert Kitt has always had a creative mind, but didn’t pursue art until about 20 years ago — when he was in his 70s.

Kitt, now 92, has since dived straight into his artwork, creating new pieces every single day. His art ranges from hand-cut pieces of vinyl glued to canvas, paintings done completely with sponges and sandblasted glasswork.

He describes his work as modern art. Most of the vinyl pieces are packed with vibrant colors and filled with geometric shapes — circles, squares and lines. With a pair of scissors, Kitt cuts even the smallest of shapes by hand, excluding more intricate shapes that he uses a vinyl machine for.

With the glasswork, Kitt will take an ordinary piece of glass — a vase, for example — and create a design, transpose it to vinyl and finish it on the piece of glass with a sandblasting cabinet.

“He can’t draw, but it’s something about modern art — the pattern, the color — that drives him,” Laura Kitt says. “He looks at what’s in front of him to fill up. If he sees something that’s blank, he wants to fill it.”

Laura Kitt says she once gave her dad a pink vase from the 99 Cent Store — he returned it to her, redecorated in vinyl stripes. And when she gave him a blank ornament, it came back with dots all over it.

Kitt says he isn’t sure where he gets his inspiration from — he just sits down and does it.

“It’s like he creates something out of nothing,” Laura Kitt says.

But Kitt says he’s always had the mind of a designer.

“When I was in grammar school, at Christmastime, the nuns would have me do a Christmas scene on their blackboards with chalk,” he says.

Kitt grew up to be a contractor in Chicago, using formica in ways that hadn’t previously been done.

In 1962, longing for warmer weather, he moved his family to Tucson and started a contracting business.

“I figured, ‘What the hell do I have to be (in Chicago) for?’” he says of the Chicago weather.

But years later, Kitt suffered a heart attack, ending his career with the contracting business. He later moved to San Diego with his wife, where the couple lived on a boat for many years, keeping their Tucson home for vacations.

By 1979, Kitt decided to start a sign business in San Diego. He sold it about two decades later, after Laura Kitt had moved back to Tucson and had a baby. Plus, Kitt’s wife was ready to get off the boat.

“When I sold it, we were the largest client-based sign company in San Diego,” Kitt says. “We had the biggies — we had the shopping centers, we had the San Diego Opera, San Diego Symphony. All the major things — we did signs for.”

After moving back to Tucson, Kitt started another sign business — but it was short-lived. His wife found out she had terminal cancer and died six months later.

Kitt sold the sign business and started sandblasting glass only a handful of years later. His interest in vinyl piqued after that.

Currently, Kitt’s goal is to get his art — the hundreds of pieces he’s made — sold. He hopes to open a pop-up art gallery soon.

The Southern Arizona Animal Food Bank supplies food to feed most pets, from fish, turtles, and lizards to guinea pigs, birds, and horses.

Robert Kitt hopes to open a pop-up gallery to show off his artwork.

Among the mediums that Robert Kitt uses is colorful vinyl that he cuts by hand.

All of Robert Kitt’s paintings are done with sponges. 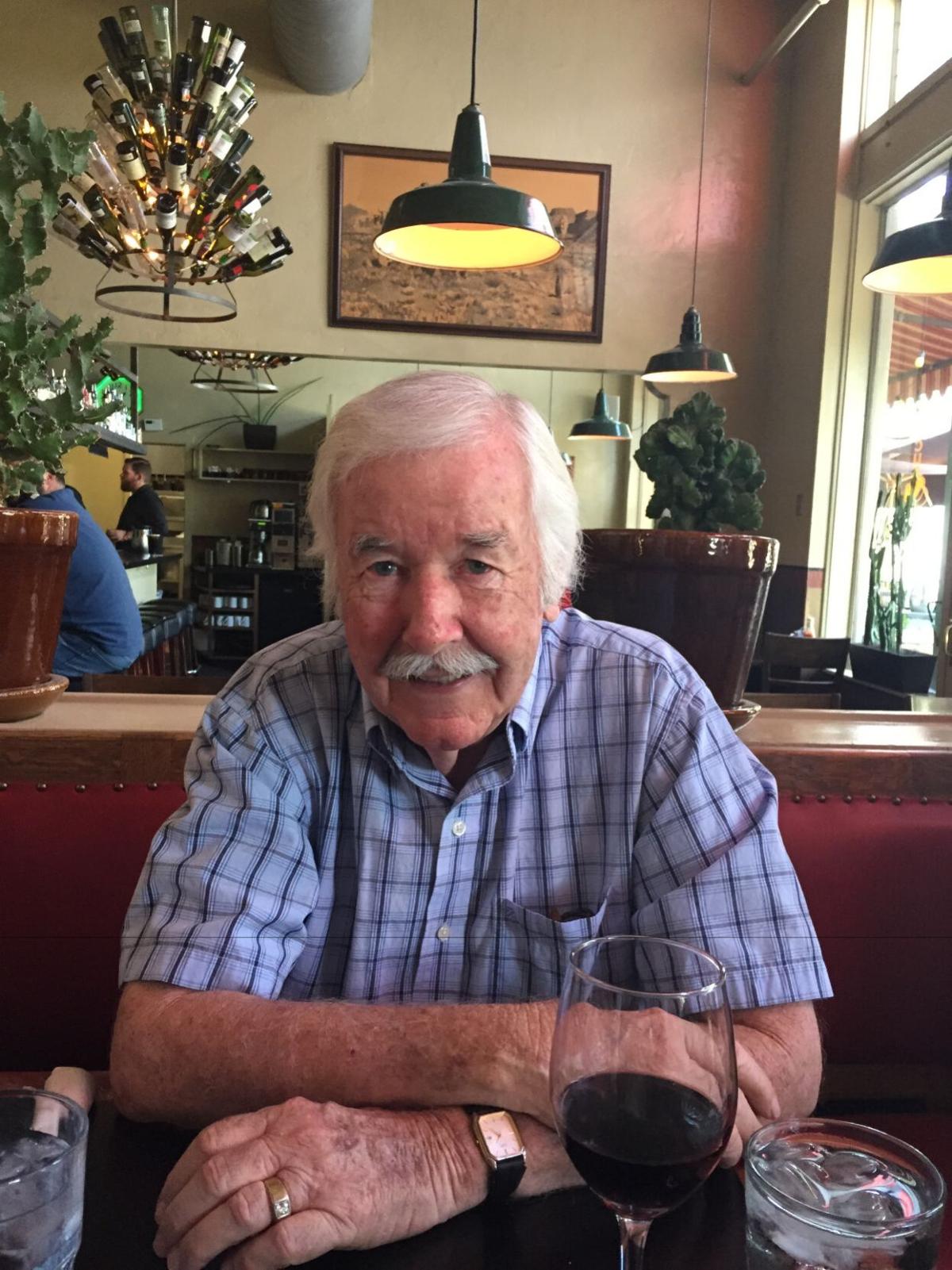