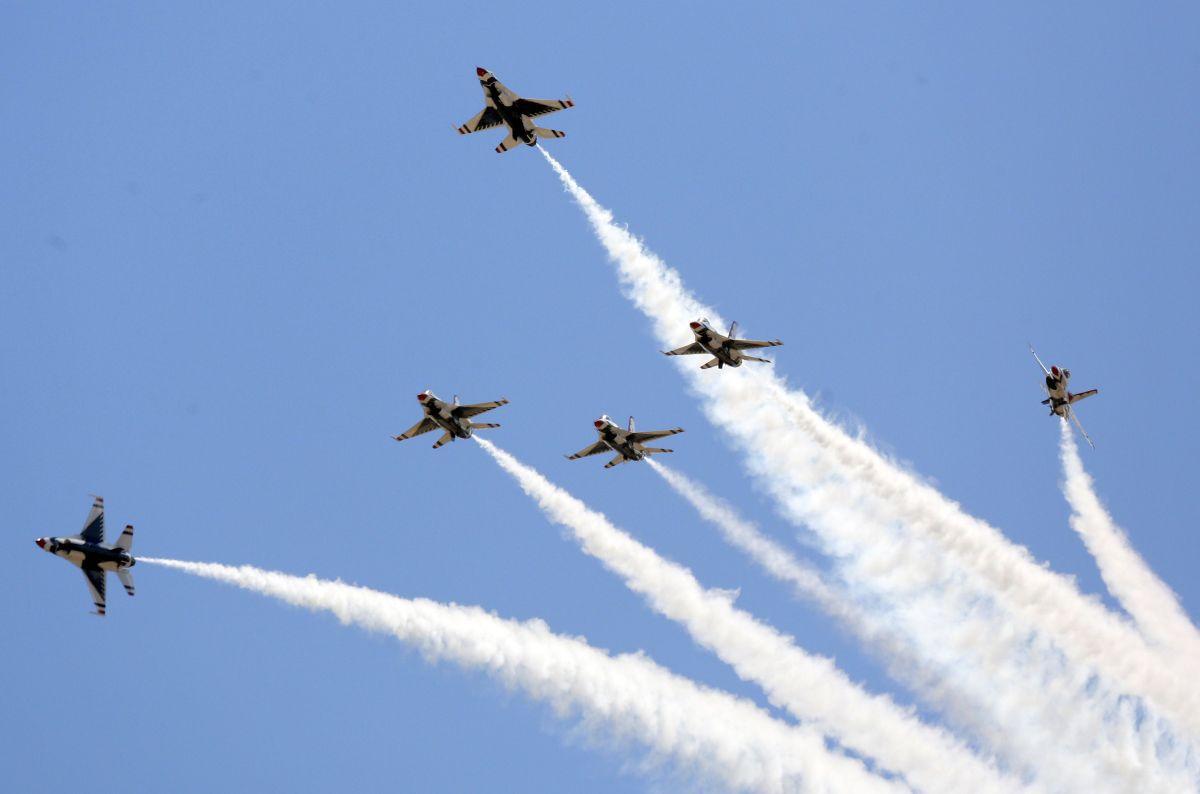 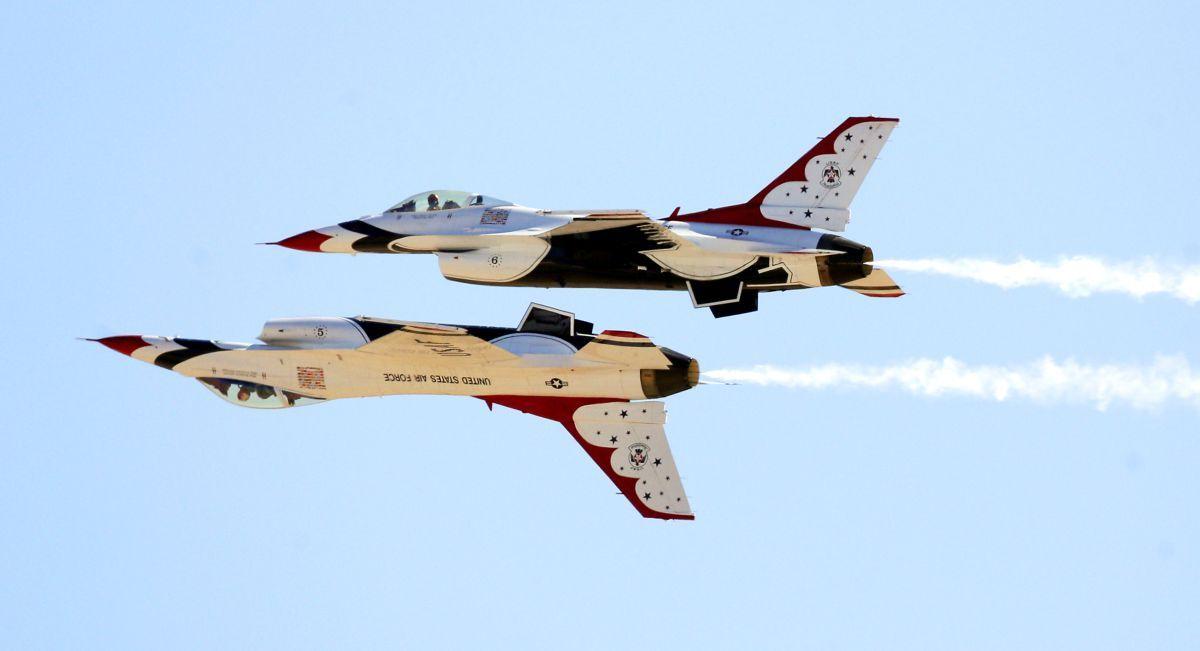 A pair of Thunderbirds perform aerial maneuvers at the 2014 Thunder and Lightning over Arizona show. 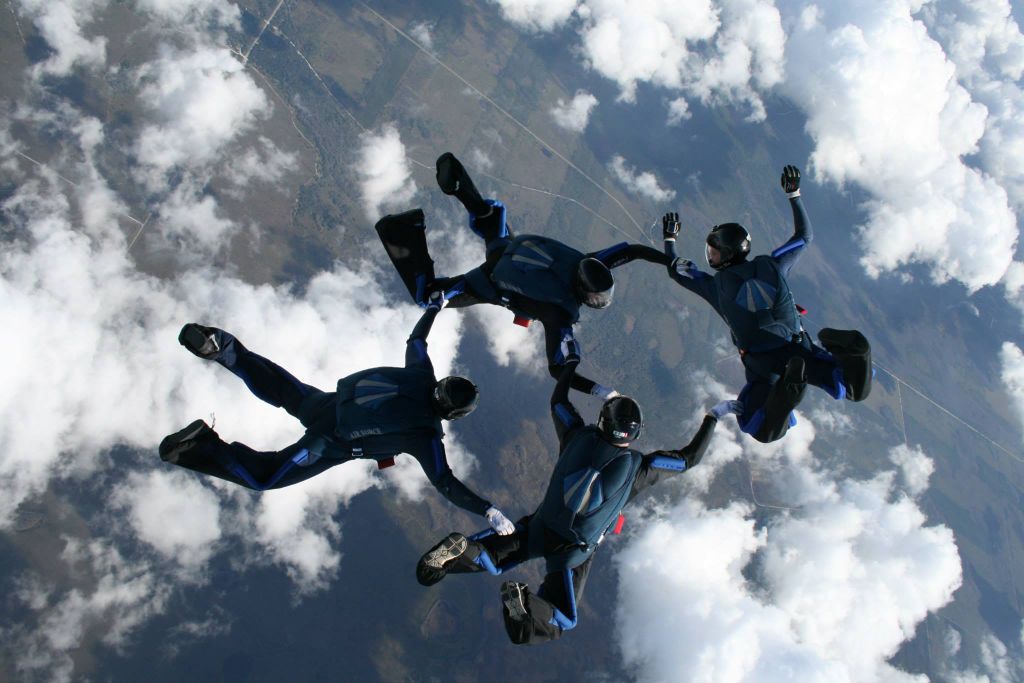 The Wings of Blue parachute team competes in both formation and freestyle skydiving, as well as canopy piloting. 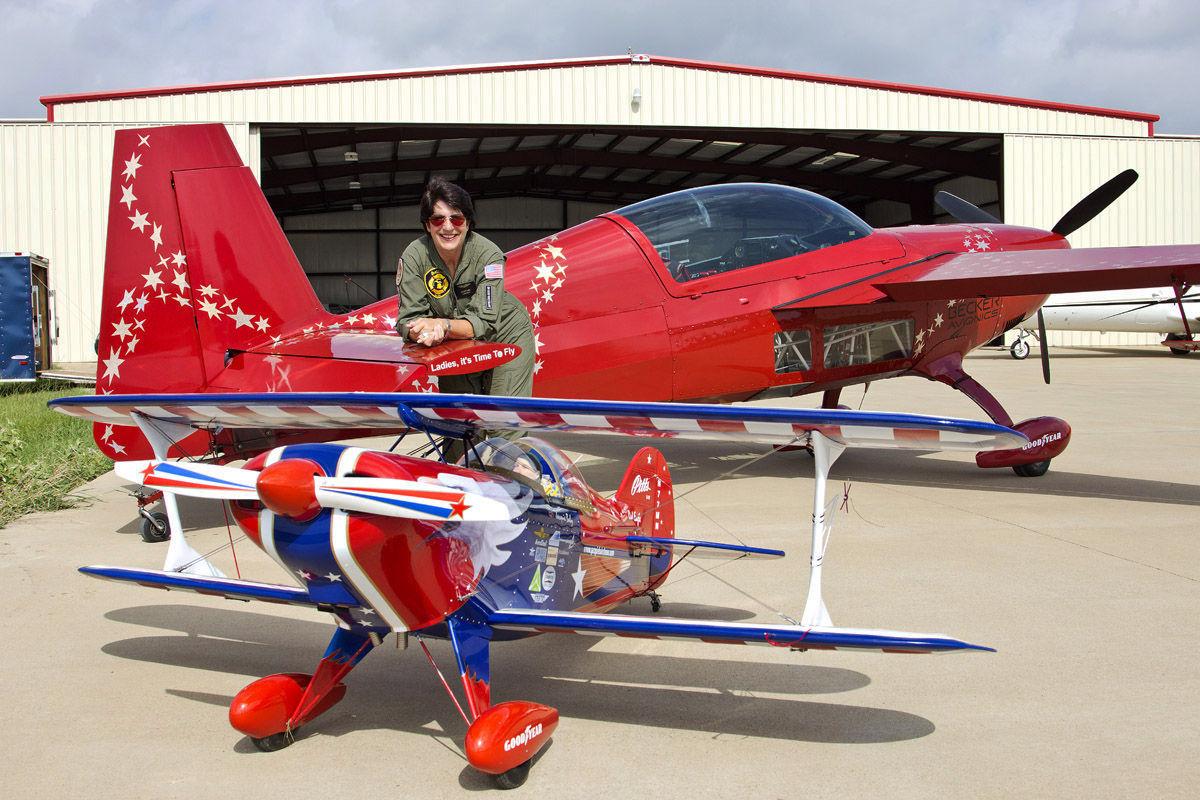 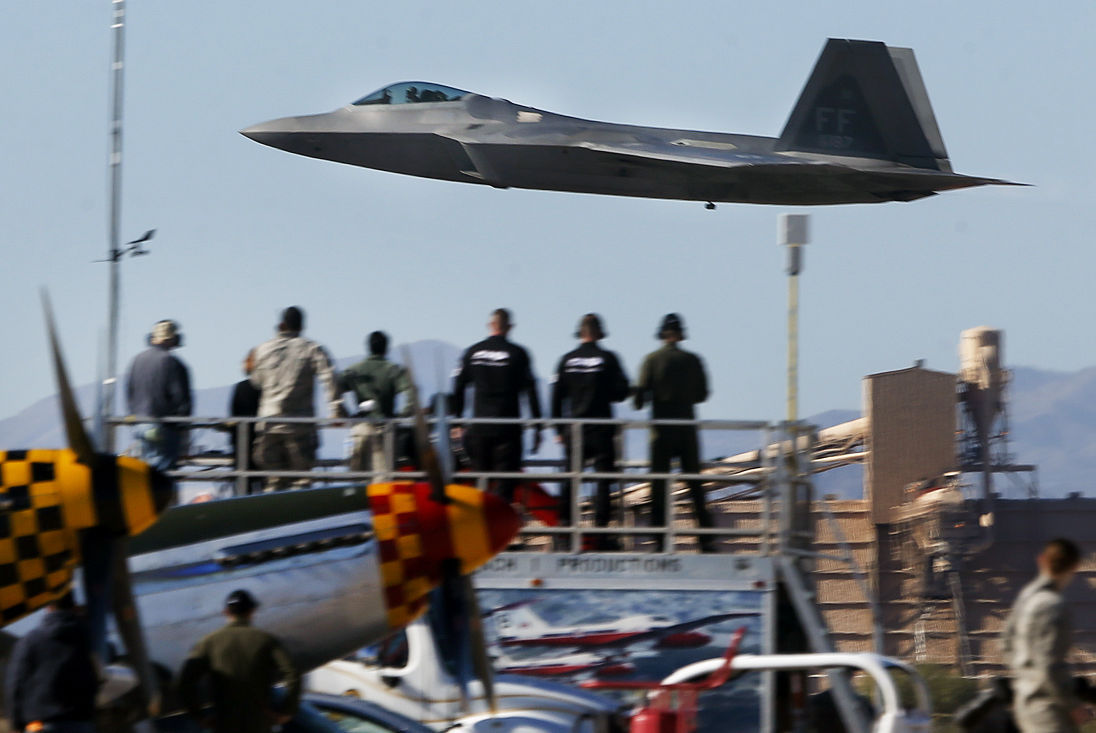 An F-22 Raptor speeds past onlookers during the Heritage Flight Training and Certification Course, which certifies pilots in preparation for air show season. 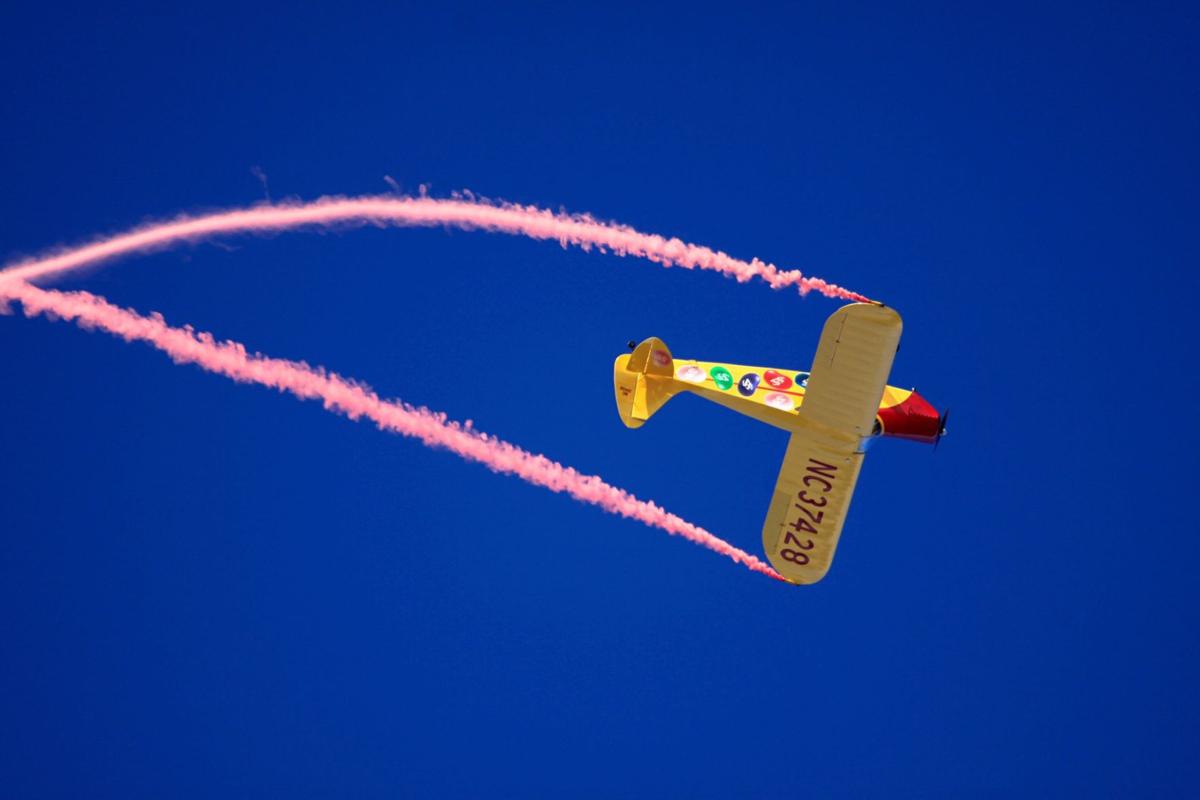 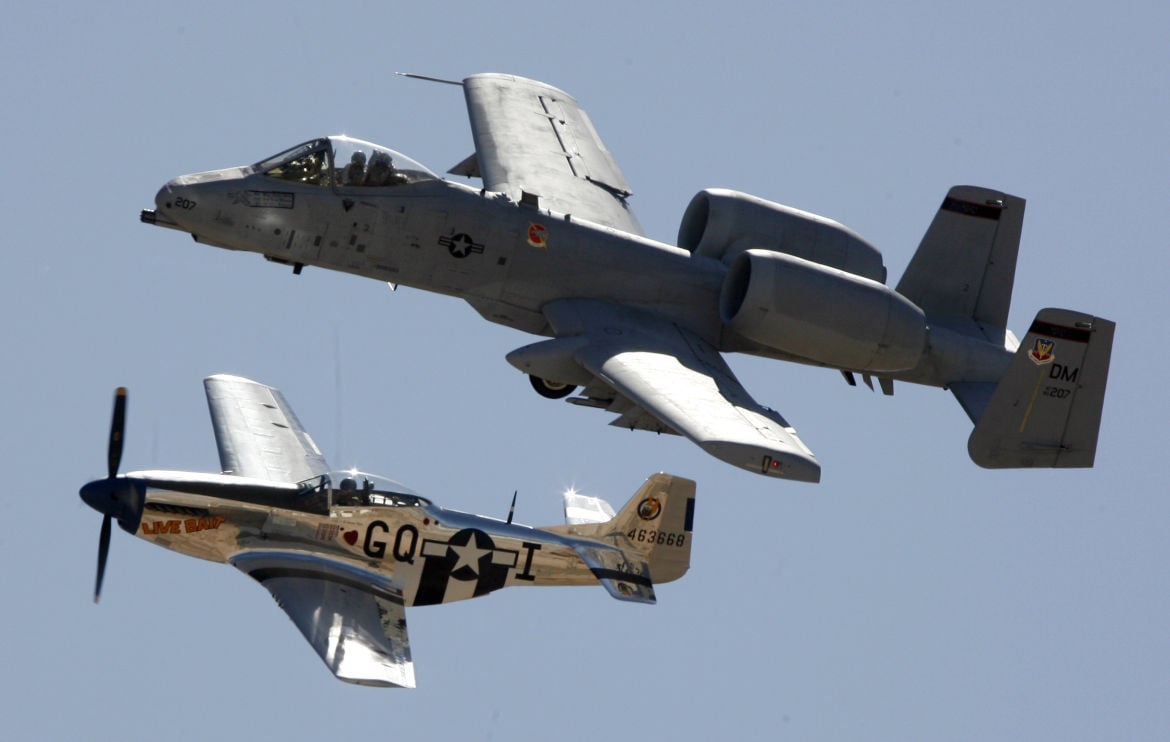 On top, an A-10 Thunderbolt II flies with a P-51 Mustang during the 2012 Thunder and Lightning air show. 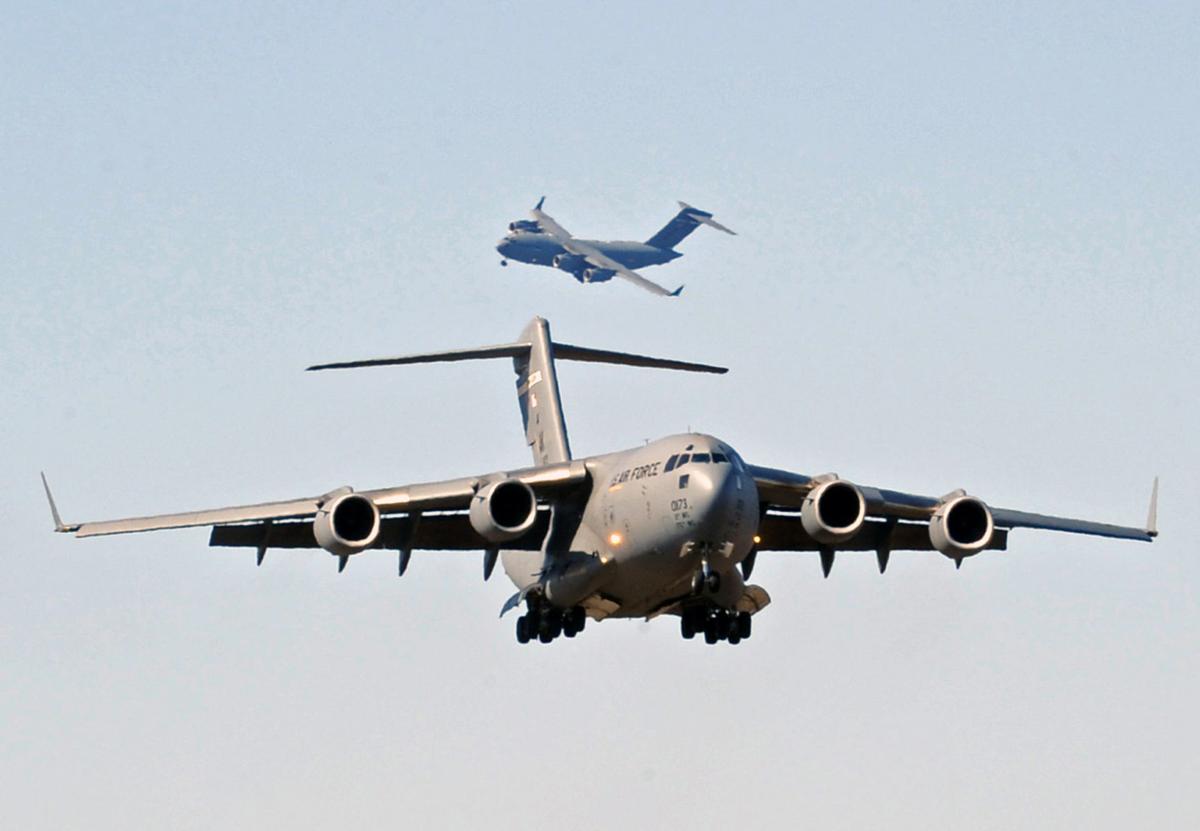 Two C-17 Globemaster III aircraft prepare to land after participating in a training exercise at Elmendorf Air Force Base. 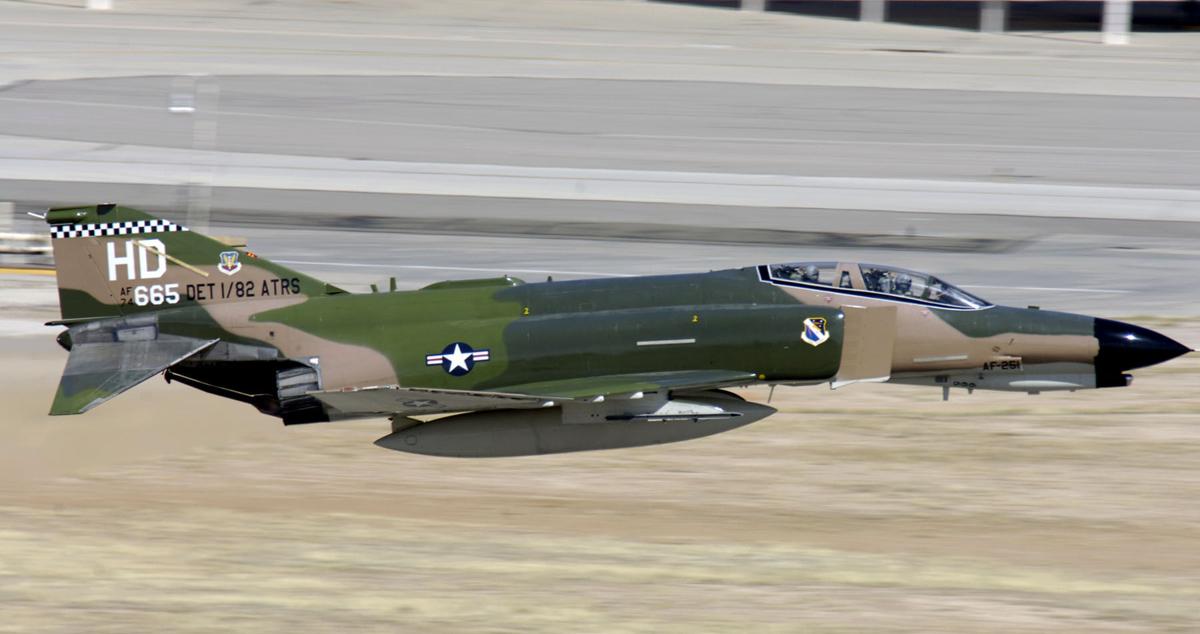 An F-4 Phantom II, on display at this year’s event, takes off from Davis-Monthan in 2007. 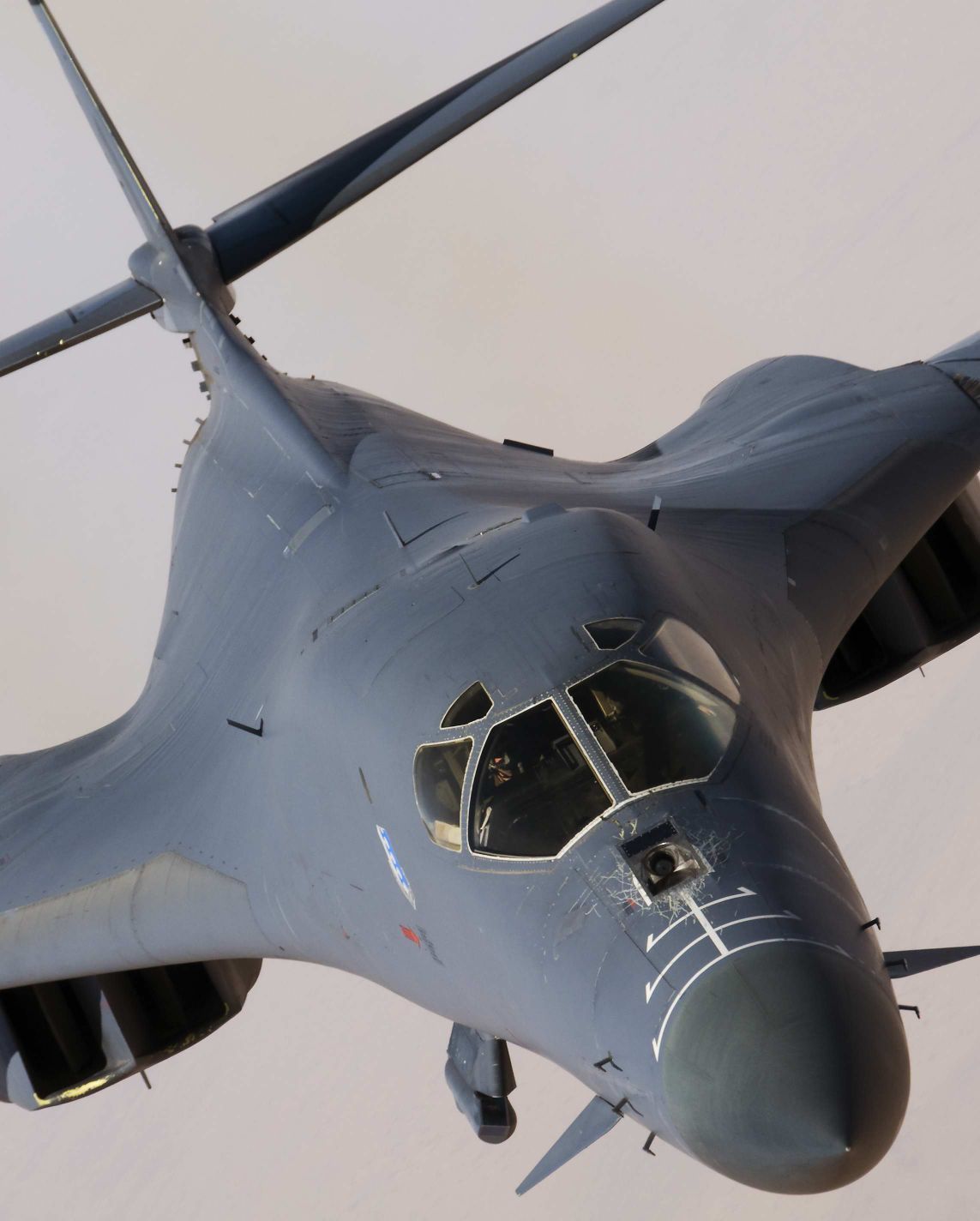 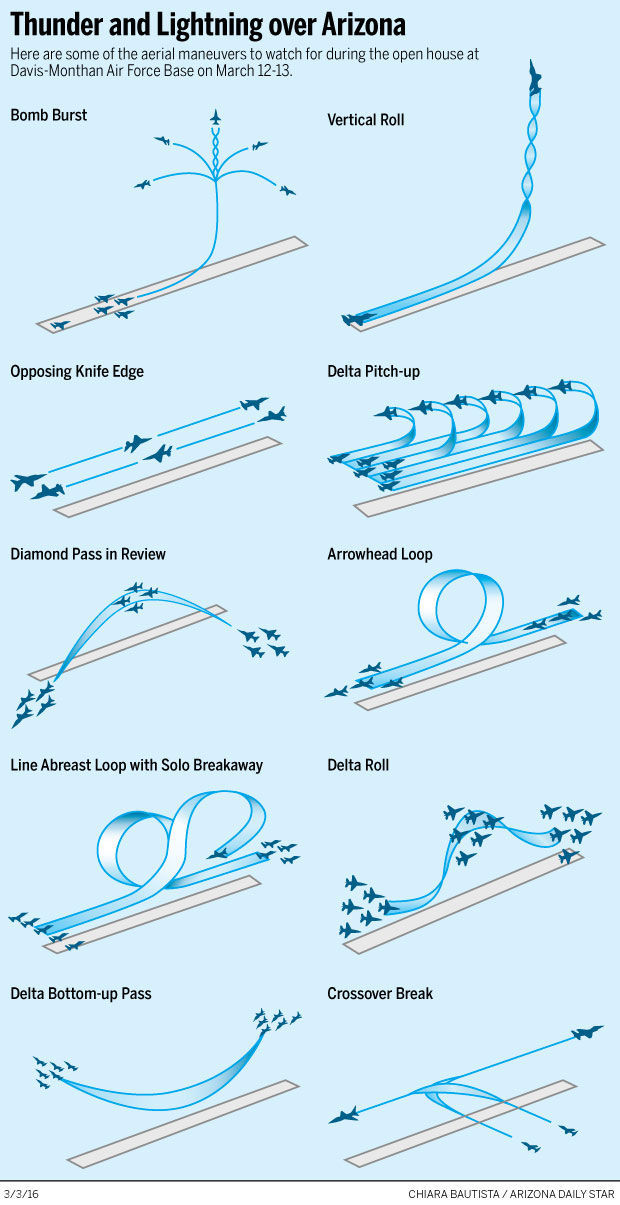 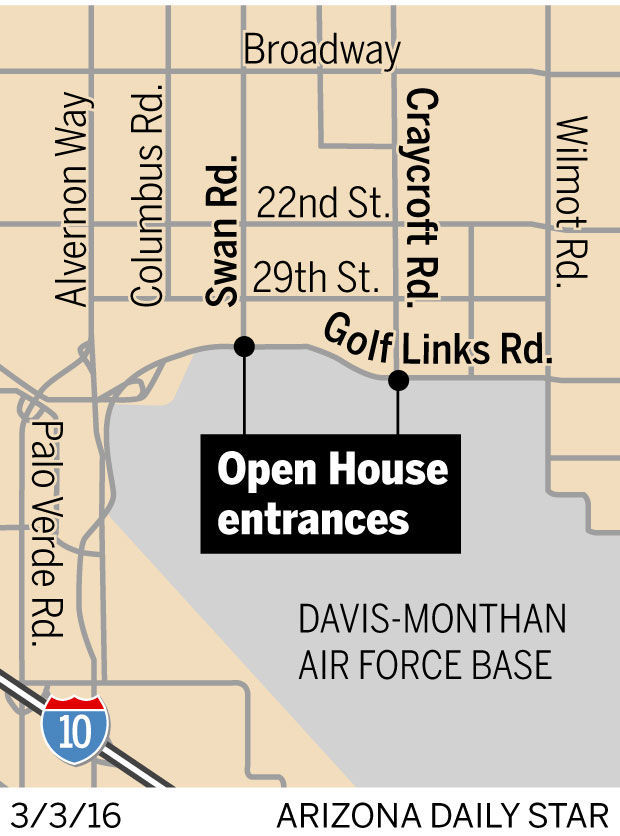 By Sarah Tully Special to the Arizona Daily Star

Capt. C.J. Anthony got hooked on airplanes went he went to his first air show at age 5. When he was 13, he saw his first A-10 at an air show and he knew he wanted to fly one – a goal that he accomplished.

Anthony’s experience has allowed him to help direct the upcoming Davis-Monthan Air Force Base 2016 Open House Air Show. The U.S. Air Force captain knows the event exposes young people to military careers and reaches out to the surrounding Tucson community.

“It’s a great chance to open up our gates to publicly showcase our mission and show our appreciation for the support of Davis-Monthan,” said Anthony, the show’s air operations director.

Davis-Monthan hosts the open house every other year, giving the public a rare opportunity to peek inside the base, as well as see a dramatic air show overhead. The free event, called “Thunder and Lightning over Arizona — Honoring the Past, Inspiring the Future,” is set for March 12 and 13, with gates opening at 9 a.m.

With 9,934 jobs on base, Davis-Monthan had a total economic impact of $974 million to the surrounding community in 2014, according to an economic impact analysis released last year.

“Not only is it a big event in size, but it’s a big opportunity that we only have every couple of years,” said Lt. Sydney Smith, a spokeswoman for Davis-Monthan.

The show will include both aerial and ground displays.

One of the highlights will be a demonstration by the U.S. Air Force Thunderbirds, an air combat command unit of pilots who perform entertaining aerial maneuvers. The Thunderbirds usually do 40 maneuvers, according to the Thunderbirds’ fact sheet. The F-16 planes get within about three feet of each other, said Capt. Sara Harper, a spokeswoman for the Thunderbirds.

The Tucson show will last about an hour and be the first in the Thunderbirds’ 2016 season. They last flew in Tucson during the last Davis-Monthan open house in April 2014.

Tucsonans will also get the chance to see a pre-show in local skies: The jets are scheduled to arrive at 1 p.m. March 10 and a practice run will be at 3 p.m. March 11, Harper said.

Other air show highlights include the Wings of Blue, the U.S. Air Force’s skydiving team, and Kent Pietsch, who does a comedy routine in the sky.

On the ground, at least 42 aircraft will be on display, some of which will be brought in for the show specifically. Visitors will be able to walk through some of the planes.

• C-5 Galaxy: The largest airlifter in the Air Force inventory and one of the largest aircrafts overall in the world.

• E-3 Sentry: An airborne command control center that can provide a real-time picture of a battlefield.

• There’s plenty for children to do: Jumping castles, pictures in an aircraft cockpit and flips in a flight simulator. Other agencies including U.S. Customs and Border Protection will be doing demonstrations.

“This is a real-world thing people get to see,” Smith said. “They can see what goes on behind the scenes.”

While Davis-Monthan provides a lot to see on base, the logistics can be tricky.

Air show planners have been working with local law enforcement to control and direct traffic outside the base, where two gates will be open for the show. Parking will be available.

Also, planners have checked in with organizers of another big event on the same weekend – the Tucson Festival of Books on the University of Arizona campus.

Before arrival, visitors need to check what they are bringing because there are a lot of restricted items. Some are fairly obvious, such as weapons and hoverboards. But others are not: Water and big purses. Free water will be available on base. (See related box.)

Also, visitors need to be ready for a lot of walking. Smith estimates that it’s about a half a mile from the entrance to the end of the airplane displays.

If visitors want a more predictable day, they can pay extra for a reserved seat, the beer garden or a VIP experience.

The full schedule had yet to be released as of Tuesday.

Jacquie B: A monoplane stunt pilot

The open house and air show are free, but most visitors will need to find a place to watch. Chair rentals are available. For those who prefer reserved spots, there are several options for a fee:

Flight Line Club: The VIP experience costs $125 in advance and $135 at the gate, including reserved seats, catered meals and preferred gate access and parking.

Beer garden: A $30 fee gives access to the beer garden, where the first beer is included with admission. A shaded area and exclusive viewing area is part of the garden.

For more information and to buy tickets, go to http://www.dmforcesupport.com/AirShow/index.html

What to bring and leave at home

Davis-Monthan is limiting the items that are allowed on base, so guests should come prepared.

Here is an abbreviated list of what’s permitted, prohibited and recommended at the air show. A full list can be found on the show’s website: http://www.dm.af.mil/library/d-mthunderandlightning.asp

Small women's purses. (No dimensions were released, but small clutches or similar-sized purses are allowed.)

Thunderbirds, by the numbers

2: Number of years of assignment for officers with the squadron.

280 million: Number of people who have seen the Thunderbirds.

The Thunderbirds were officially activated June 1, 1953 at Luke Air Force Base near Phoenix.

Base has room for growth and a bright future, she says.

Brendan Lyons suits up with The Thunderbirds.

Reprieve for D-M's A-10s may be short-lived

Cuts to the A-10 fleet based at Davis-Monthan could start by the fall of 2018, under the latest Air Force plan.

Report: Air Force backs off push to retire A-10

F-35s to train in Tucson in March

Take a tour of this hidden Tucson gem

Randi Kisiel, the executive director of the Little Chapel of All Nations gives a tour of the chapel on the University of Arizona campus. Johan…

Rushing water at Romero Pools in Catalina State Park thanks to rain earlier this week.

A pair of Thunderbirds perform aerial maneuvers at the 2014 Thunder and Lightning over Arizona show.

The Wings of Blue parachute team competes in both formation and freestyle skydiving, as well as canopy piloting.

An F-22 Raptor speeds past onlookers during the Heritage Flight Training and Certification Course, which certifies pilots in preparation for air show season.

On top, an A-10 Thunderbolt II flies with a P-51 Mustang during the 2012 Thunder and Lightning air show.

Two C-17 Globemaster III aircraft prepare to land after participating in a training exercise at Elmendorf Air Force Base.

An F-4 Phantom II, on display at this year’s event, takes off from Davis-Monthan in 2007.