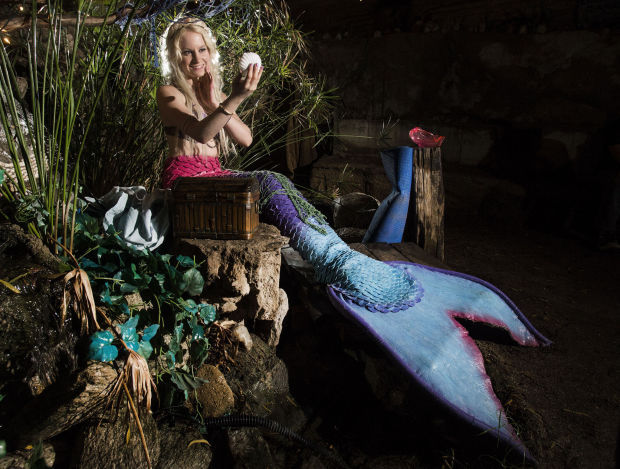 Emy Higdon, maybe better known as Mermaid Odette, checks her appearance in a clamshell mirror at Valley of the Moon, 2544 E. Allen Road. Higdon, 23, a professional mermaid, will be one of many sea creatures marching downtown during Return of the Mermaids this Saturday. Aside from aquatic entertainers, the event will also feature food trucks and a market. 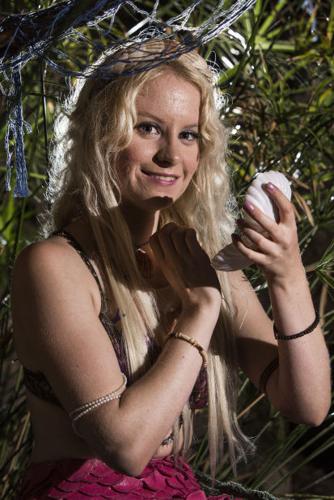 Emy Higdon based the Mermaid Odette on a little bit of French fantasy. When Odette came here from France, she was abandoned in the desert and rescued by a sea creature.

The mermaids of Southern Arizona are making waves.

On Saturday, pirates, jellyfish, mermaids and all manner of sea creatures will come in with the tide, washed ashore on downtown’s pop-up beach on the MLK Lot, North Fifth Avenue at East Congress Street, and Fourth Avenue’s Haggerty Plaza, 316 N. Fourth Ave.

The Return of the Mermaids event assumes that the mythical people once swam in an ancient ocean covering Arizona.

“Basically, people are invited to come over in their costumes,” said David Aguirre, one of the main organizers. “We were under the sea at some point in our past. What would life be like if we were still under water?”

For Lizzie Mead, owner of Silver Sea Jewelry, 330 N. Fourth Ave., and the coordinator of the Fourth Avenue portion of the evening, it looks like a female version of the Aquaman (er, woman) costume, which she will sport Saturday.

Fins will start kicking at both locations at 7 p.m. For those who prefer floaties to deep sea diving, the Mermaid Luau in the Octopus’s Garden at Haggerty Plaza keeps it family friendly, with face painting, crafts and games, island music and a visit with Tucson’s professional mermaid, Odette, supported by the Fourth Avenue Merchants Association.

The party on Fourth wraps up around 9 p.m., and sea life will parade from Fourth Avenue to the Downtown Tucson Partnership’s Summer in the City at the downtown beach, where entertainment, food trucks and a mermaid market will be in full swing.

Don’t expect water or alcohol at either Haggerty Plaza or the beach, though. This is a dry event.

After a costume contest, a staged coronation of King Neptune and a goddess of the sea around 9:30 or 10 p.m., the festivities will follow the current to Hotel Congress for a beach-themed party from about 10 p.m. to 2 a.m.

Until then, we caught up with 23-year-old Emy Higdon, or Mermaid Odette, about getting her sea legs, starting around 2009. The professional mermaid will be at both locations Saturday and is a mermaid at Valley of the Moon, 2544 E. Allen Road, the first Saturday of every month. You can bet your lucky sand dollar we had some questions about the life of a mermaid in the desert.

Tell me what you do as a mermaid. Is this a full-time job or something you do on the side?

Right now, it’s a full-time job and it’s very difficult because I’m also in school. I’m studying business at Pima Community College. When I transform into Mermaid Odette, I swim in pools for kids and other events and parties and photo shoots…”

How did you get involved in this?

When I was 13, we had a play with a mermaid ... and I helped the girl playing the mermaid make her costume, and I always thought it would be cool to make a tail you could swim in. I was playing around with the idea and figured it out and made my first mermaid tail.”

What does it take to turn into a mermaid?

“It takes a lot of swimming practice. It can be intense. It takes a lot of breath holding. I hold my breath so it seems more realistic to the kids. ... It’s all about expanding your lungs. Also you have to develop your mermaid character so you can improv properly with the kids around.”

How did you create the character?

Mermaid Odette is based off of France, because I used to study French. She comes from the Odet River in Quimper France, and from there the story goes that I traveled with the circus, and I came from France to Arizona. My tank I was traveling in ... fell in the desert, and I was abandoned in the desert, and someone, a sea creature from Valley of the Moon ... found me and brought me there…”

Have you always been a swimmer?

I have swum a lot. I never did competitive swimming in high school, but I always loved the water. I loved mermaids as a kid. I did use to play mermaids as a kid, but I think every kid has.”

When you do events, how long are you in the water?

I can be in the water for as long as five hours. I love it. I never really get tired of swimming in the water and sitting there and relaxing with whoever is in the pool. It’s fun to tell stories.”

You are a mermaid in Tucson. What is that like?

Being a mermaid in the desert is pretty epic. There are not many mermaids in the desert, so I have lots of space to stretch my fins in the pool and bring my tail out to different areas like Romero Pools or Sabino Canyon (for photo shoots). It makes it so I can swim longer.”

Animals. Cosplay. Jewelry. All parts of her world at Silver Sea Jewelry.

If the Victorian fashionista met a gadget-loving adventurer, their blended styles might look something like steampunk chic.

An oasis in Tucson's concrete jungle

The Tucson Steampunk Society puts on its annual, holiday tea.

Emy Higdon, maybe better known as Mermaid Odette, checks her appearance in a clamshell mirror at Valley of the Moon, 2544 E. Allen Road. Higdon, 23, a professional mermaid, will be one of many sea creatures marching downtown during Return of the Mermaids this Saturday. Aside from aquatic entertainers, the event will also feature food trucks and a market.

Emy Higdon based the Mermaid Odette on a little bit of French fantasy. When Odette came here from France, she was abandoned in the desert and rescued by a sea creature.