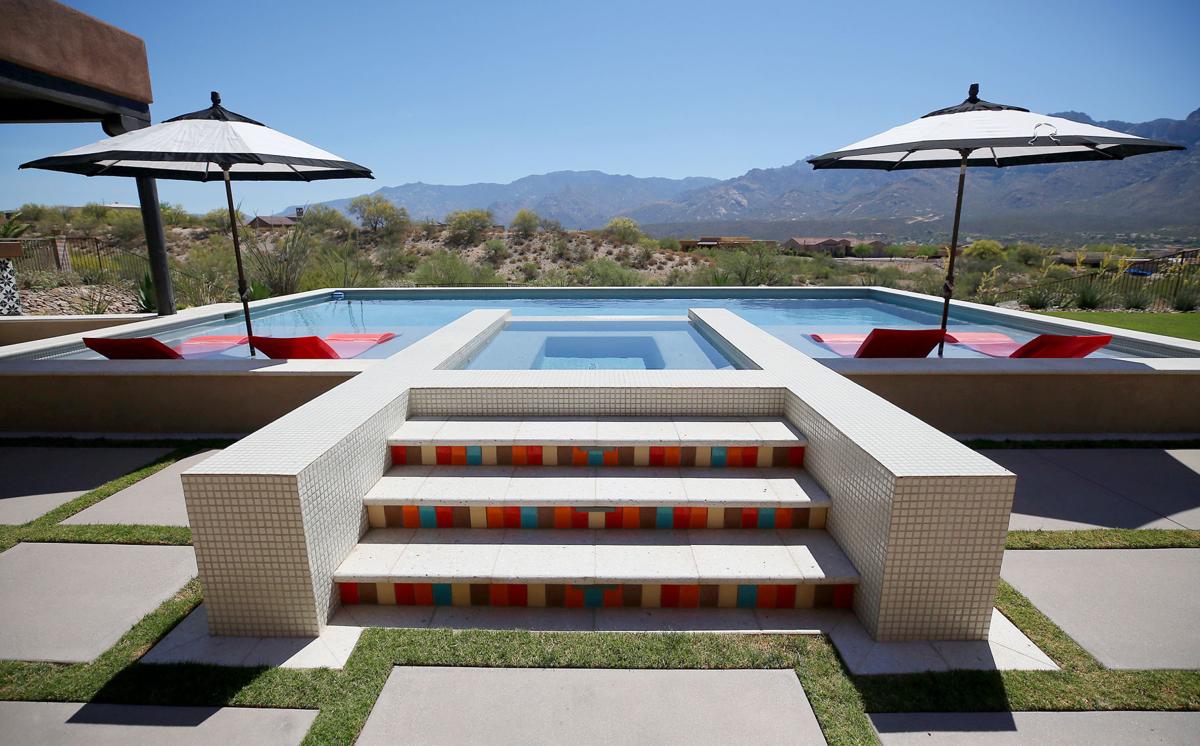 Designer Kathryn Prideaux won an HGTV Ultimate Outdoor Awards editor’s pick for her design at a home in Oro Valley. Her use of color helps the indoor living space move into the yard. 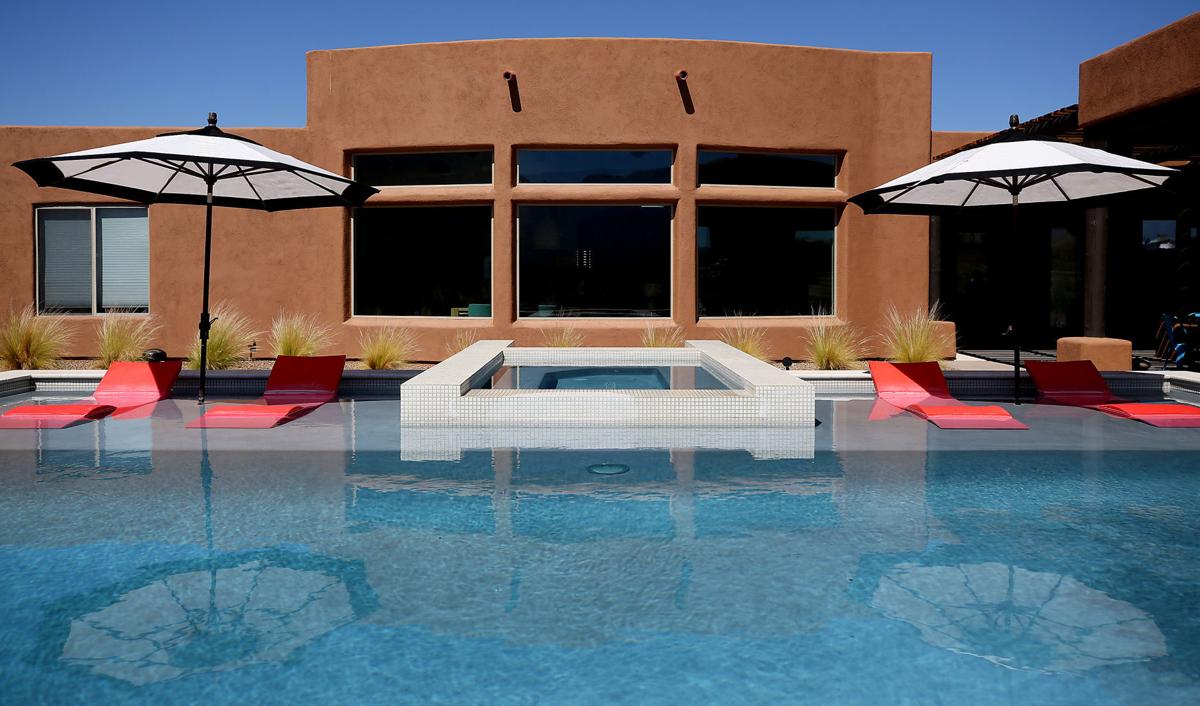 Four ledge lounges are anchored to the shallow end of the pool and shaded by two folding umbrellas. 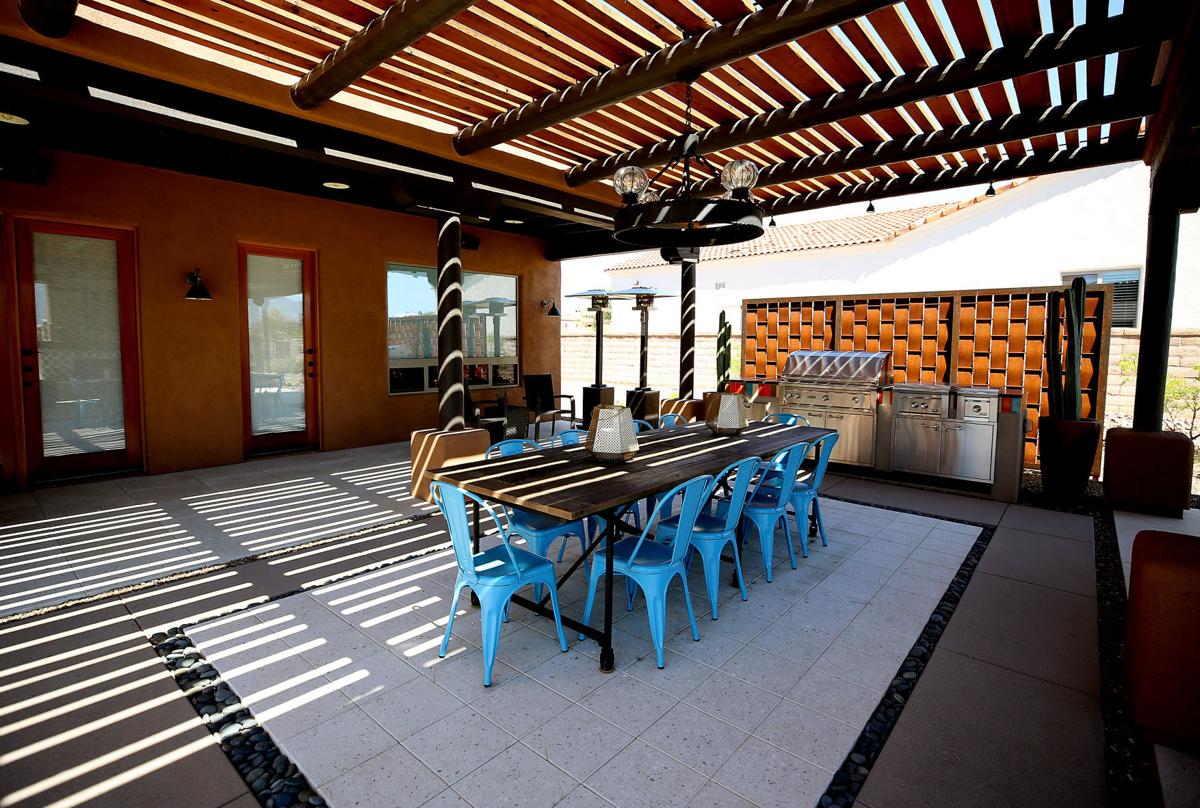 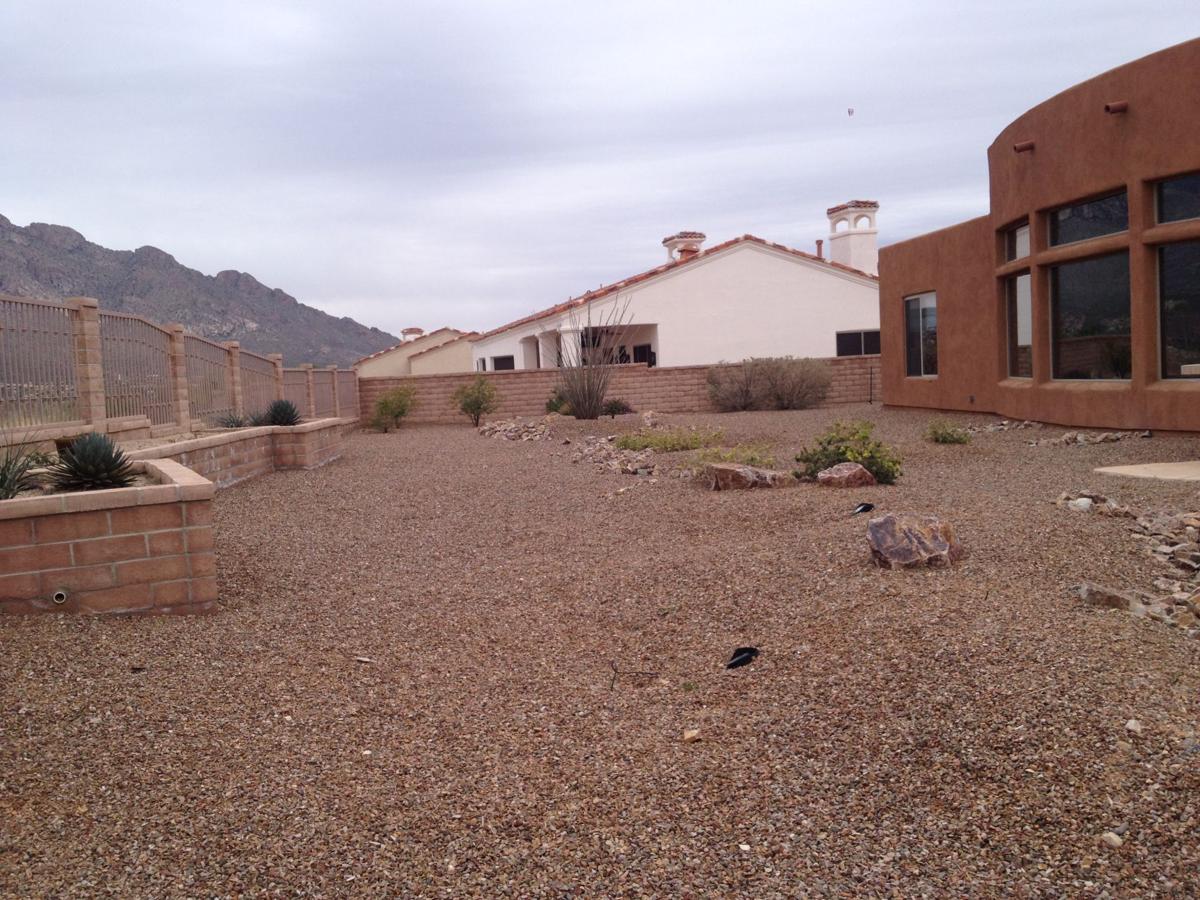 This is how the Oro Valley backyard looked before Prideaux’s award-winning redesign.

Ever wish your backyard would get noticed by HGTV?

One Oro Valley backyard with a panoramic view of looming Pusch Ridge did. It got some love from the cable television station.

It earned an HGTV award for local landscape designer Kathryn Prideaux and is featured on the station’s website, HGTV.com (search for Ultimate Outdoor Awards).

HGTV is a cable television station that focuses on homes and gardens.

Prideaux’s blank canvas was a backyard full of rocks and a perimeter fence that shortened the amount of usable space, she says.

The homeowners, who did not want to be identified for privacy reasons, wanted a pool, gathering spaces and something that took better advantage of the Santa Catalina Mountains view.

The old stair-step metal fence had masonry posts. In front of it were built-in masonry garden beds.

Since it was at the same level as the house, the fence and beds essentially cut off the sloping part of the property for landscaping. It also visually cut off the backyard from the natural desert beyond the lot.

Prideaux’s design replaced that fence with a metal one that goes down the slope and out of view. That opened up the area for adding plants that blend into the desert beyond the property.

Prideaux then put the pool smack in the center view of the big picture window that looks out into the backyard.

Because the pool colors mirror the colors Prideaux also used in the interior design, the feel is that the indoor living space moves out into the yard.

“I’ve always been a fan of the pool being seen from the inside of the house,” she says. It attracts the eye with a large focal point and becomes a visual water feature.

That move put the pool right in the middle of the landscape, which helped Prideaux with another issue: allowing people to easily socialize.

She doesn’t like the look or functions of “islands” of activity, she says. This creates isolation in that some people are at the pool while some are several yards away in a gathering space.

“I wanted connectivity between the pool and covered patio,” she says.

In the Oro Valley design, someone sitting at the dining table or in front of the fireplace can easily chat with someone lounging in the spa or in the pool.

Hacienda updated. Prideaux took the Spanish Colonial style from inside the home to the patio. An iron chandelier with globes, common talavera pottery colors and dark wood posts echo the style. Prideaux used fewer flourishes to give the feel a modern simplicity.

Vista point. Facing directly at the mountains are four ledge lounges, which are anchored to the shallow end of the pool. They are shaded by two folding umbrellas that also are set into the shallow area. That makes for a comfy way to enjoy the view at any time of the day.

For instance, the dining area for 10 is defined by a “rug” of white pavers made of concrete and shells. The tiled area is edged with Mexican beach pebbles.

The gathering area—a sofa and chair facing a fireplace and television—has a “rug” made of larger shell-inlaid concrete pavers rimmed by decomposed granite.

The feeling that the outdoor furniture is sitting on rugs is further made by the “floor” of the rest of the patio area, which is made of etched finished concrete.

Airy patio. The homeowners originally wanted the patio to be covered from the house to the fireplace a few yards away. Prideaux convinced them to place spaced beams over the dining area. It provides natural light and makes the space more airy than having a solid ceiling.

Grass. The grass lawn provides play space for kids and pets. Grass also grows around large pavers that is used as a path from the lawn past the pool to the living space.

Irrigating the grass growing between the pavers would eventually stain the concrete, Prideaux says. The landscaper installed perforated pipe to deliver water to the roots. The lawn is irrigated with pop-up sprayers.

Prideaux submitted two designs for the contest. Her second design earned a nomination in the outdoor architecture category.

Edibles to plant in June

Plant seeds for these edibles by June 15, then take the rest of the hot month off.

Gardens, savings can grow by using graywater in Tucson

Graywater: Water that’s been used once that is clean enough to use again.

Think of the Boldi-Tool as a hefty hand weeder.

Tucson gardening: a blow-by-blow look at raised beds vs. basins

Taking gardening to the mat.

Here’s a rundown of religious and secular floral symbols that mark the Easter season.

Watch: Springtime splendor in the Catalinas

A walk on the Bellota Trail in the Catalina Mountains reveals scenic views, fluttering butterflies, wildflowers, the "little apples" of manzan…

A pair of quail used teamwork to feed their tiny babies — with mom weighing down a mesquite branch and dad tugging it down to free food. Video…

Summer wildflowers in the mountains are showing up now -- just as the saguaro bloom peaks in the desert. Video by Doug Kreutz, Arizona Daily Star.

Just-hatched quail scamper across the desert on a warm May morning. Video by Doug Kreutz, Arizona Daily Star.

Milky white blossoms are turning out for their annual spring show on saguaros around the Tucson Valley. Video by Doug Kreutz, Arizona Daily Star.

Designer Kathryn Prideaux won an HGTV Ultimate Outdoor Awards editor’s pick for her design at a home in Oro Valley. Her use of color helps the indoor living space move into the yard.

Four ledge lounges are anchored to the shallow end of the pool and shaded by two folding umbrellas.

This is how the Oro Valley backyard looked before Prideaux’s award-winning redesign. 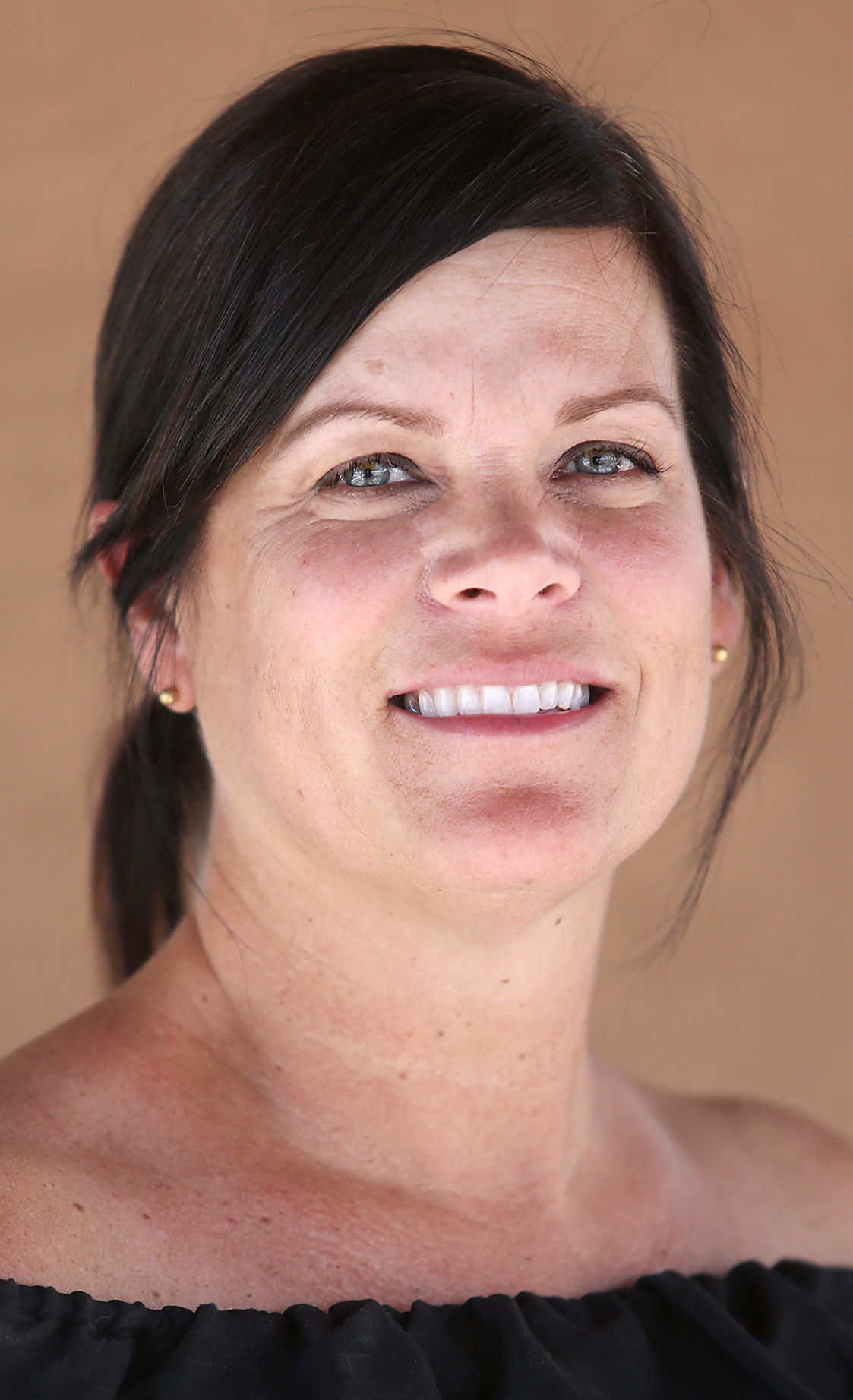