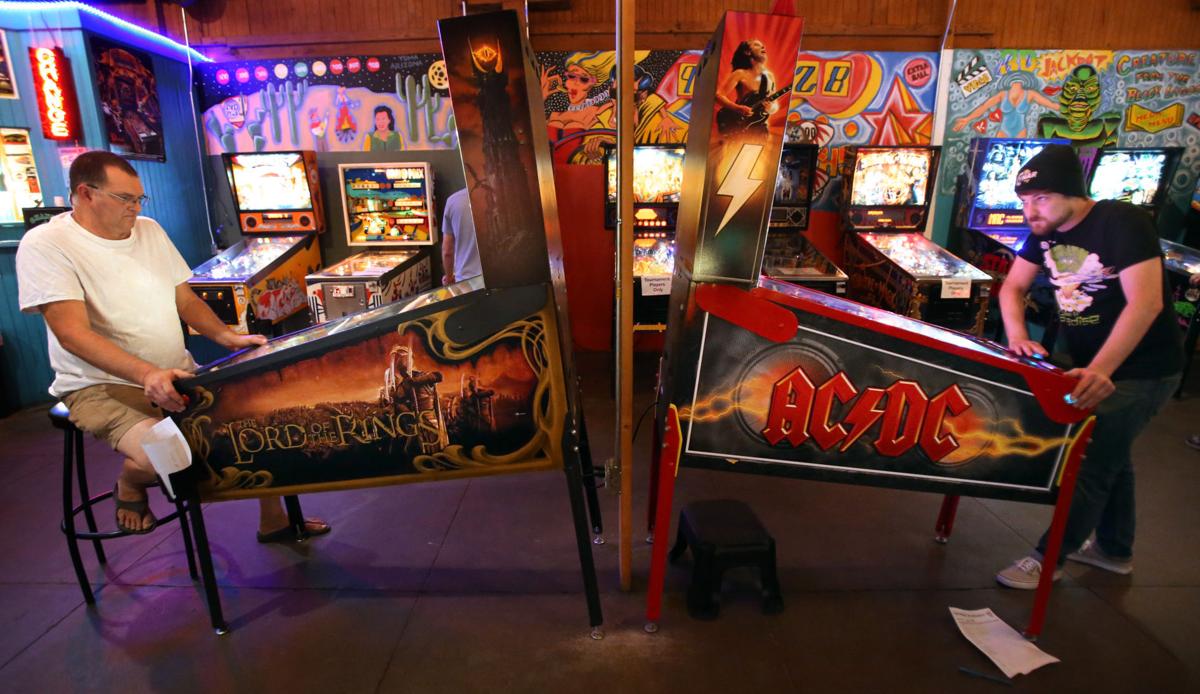 Mike LaHaie, left, and Erick Bornmann take their turns on the Lord of the Rings and AC/DC machines, two of 10 pinball machines in the November tournament at D&D Pinball, 331 E. Seventh St. 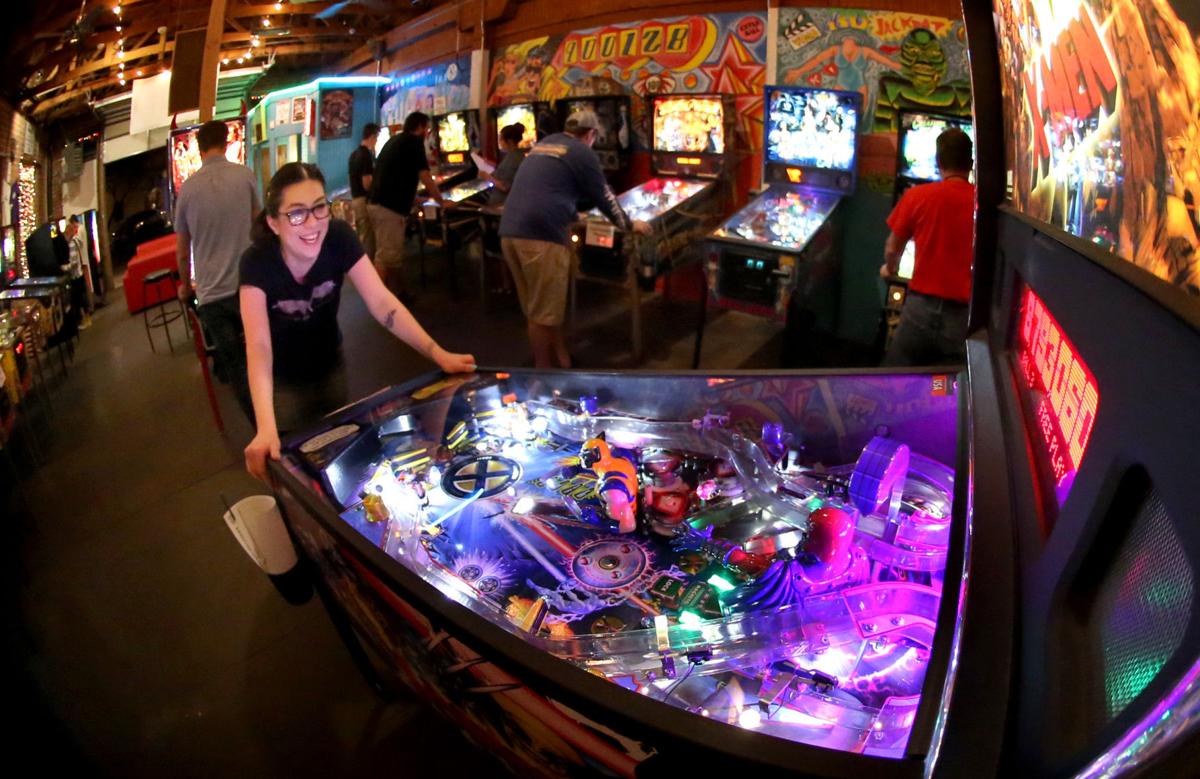 Cecilia Olea tests her skill against the X-Men machine while competing in a tournament at D & D Pinball. 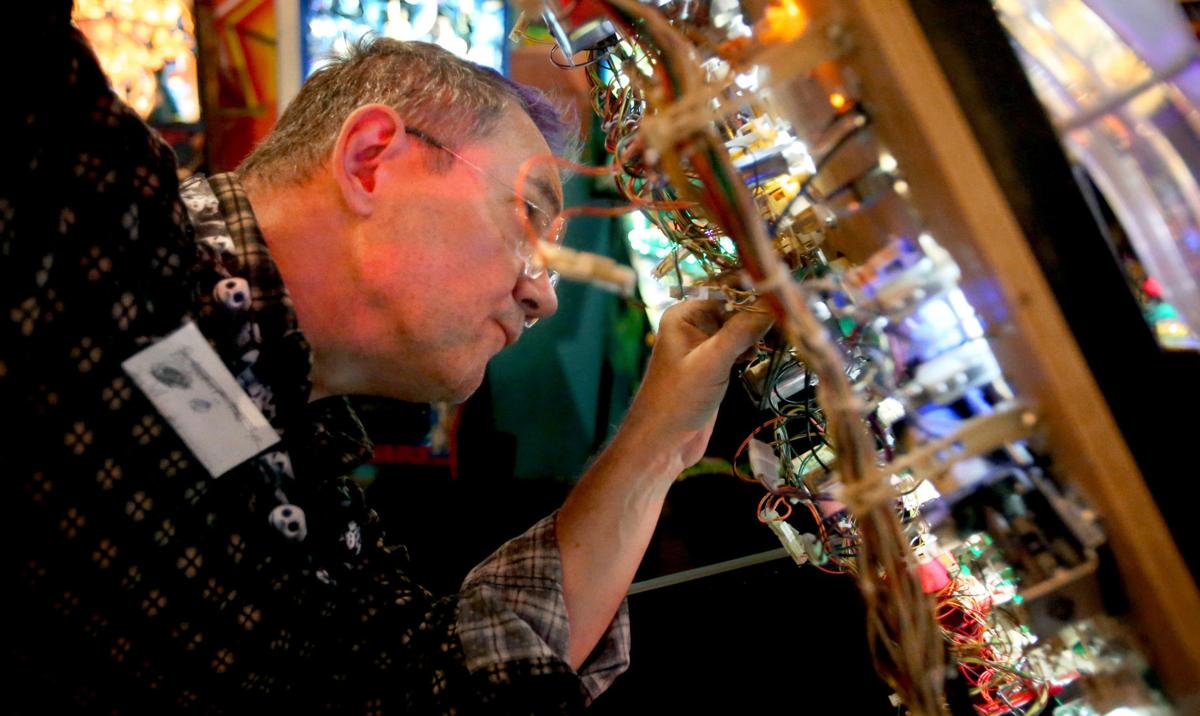 D&D Pinball co-owner Robert Noble looks into the guts of the machines chosen for the night’s competition, getting it ready for the monthly tournament. 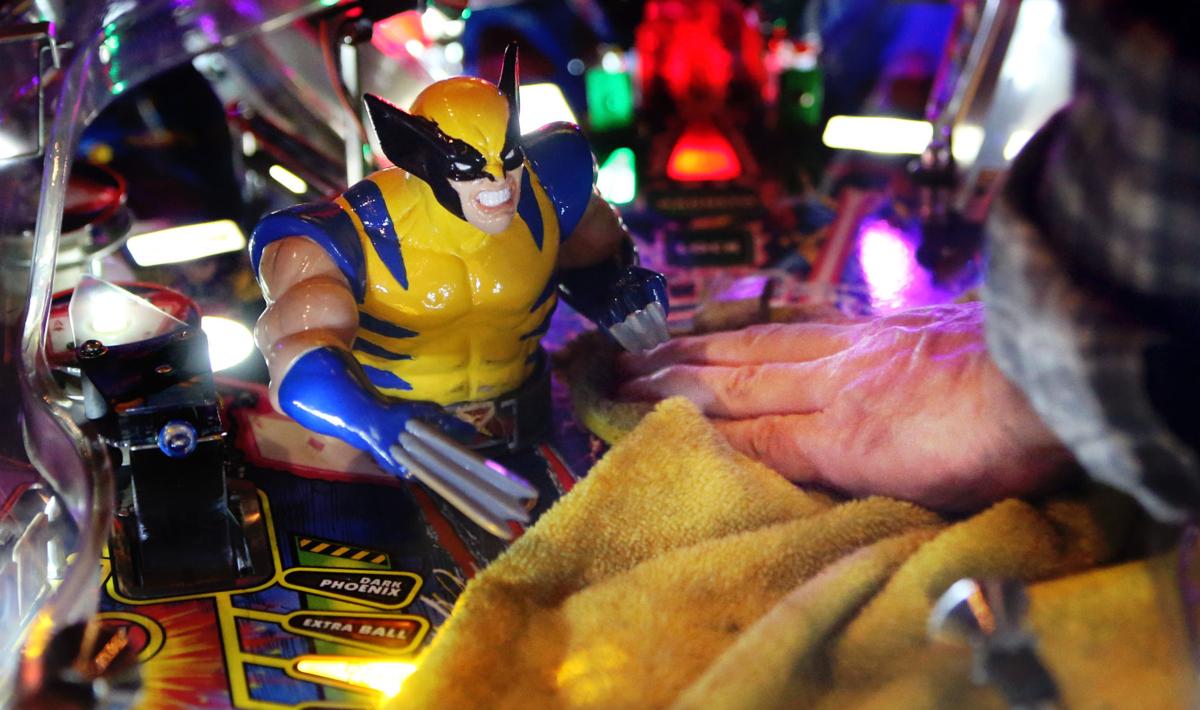 Robert Noble cleans, polishes and fine tunes the X-Men machine to have it in tip-top shape for the monthly tournament. 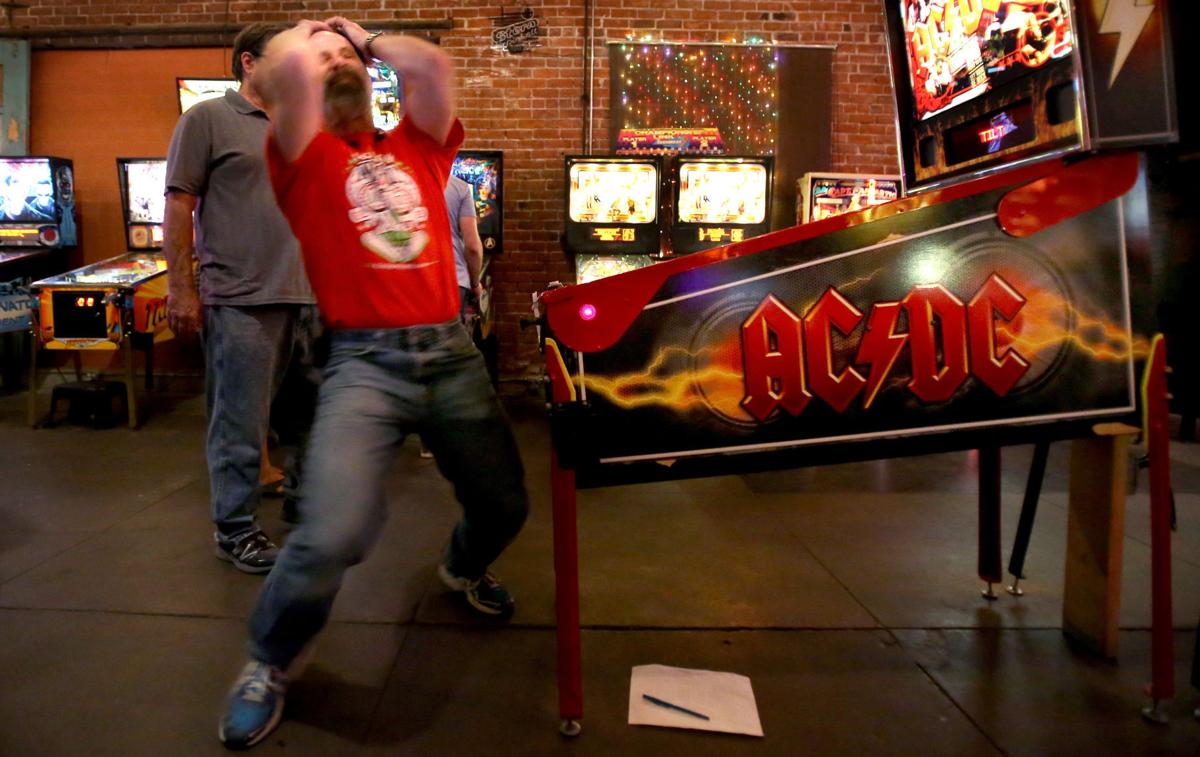 Derek Jordan anguishes after tilting on his third ball and still needing points on his last machine to make it into the tournament’s playoff. 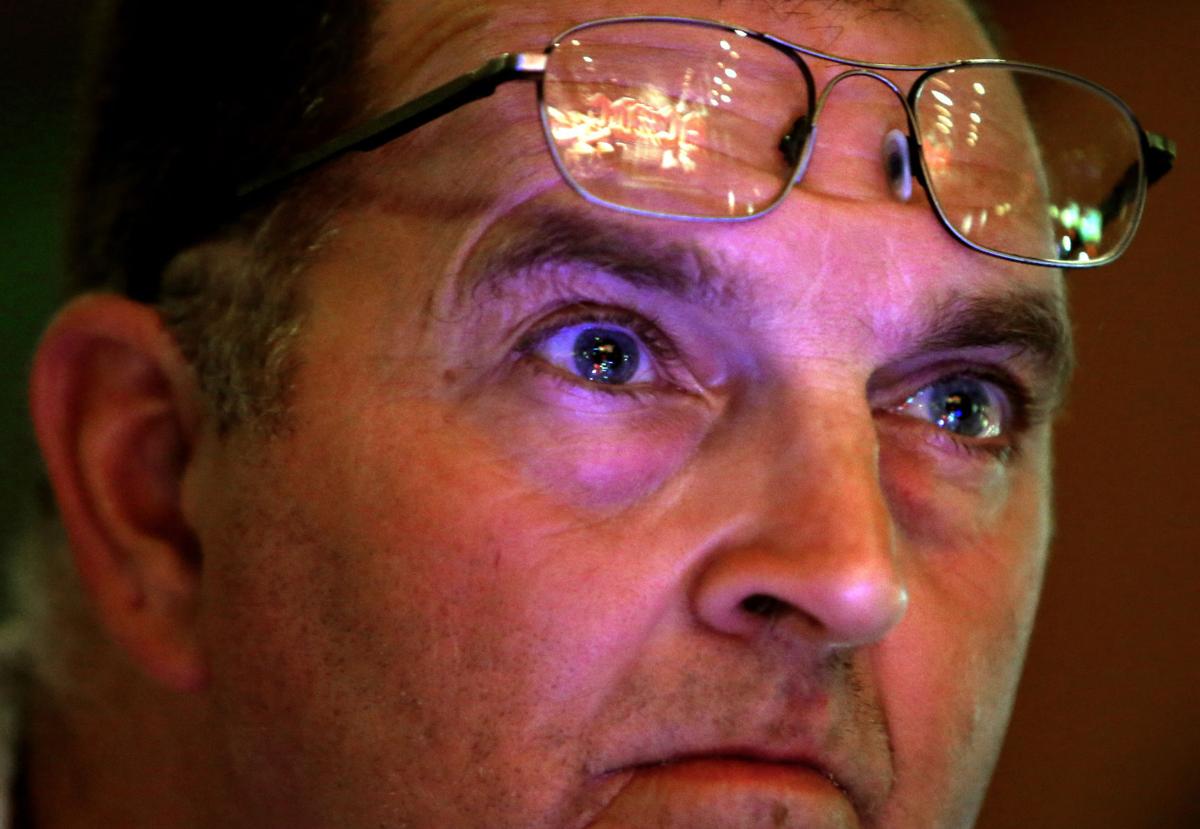 Mike LaHaie looks at his score on the AC/DC machine for the monthly tournament. 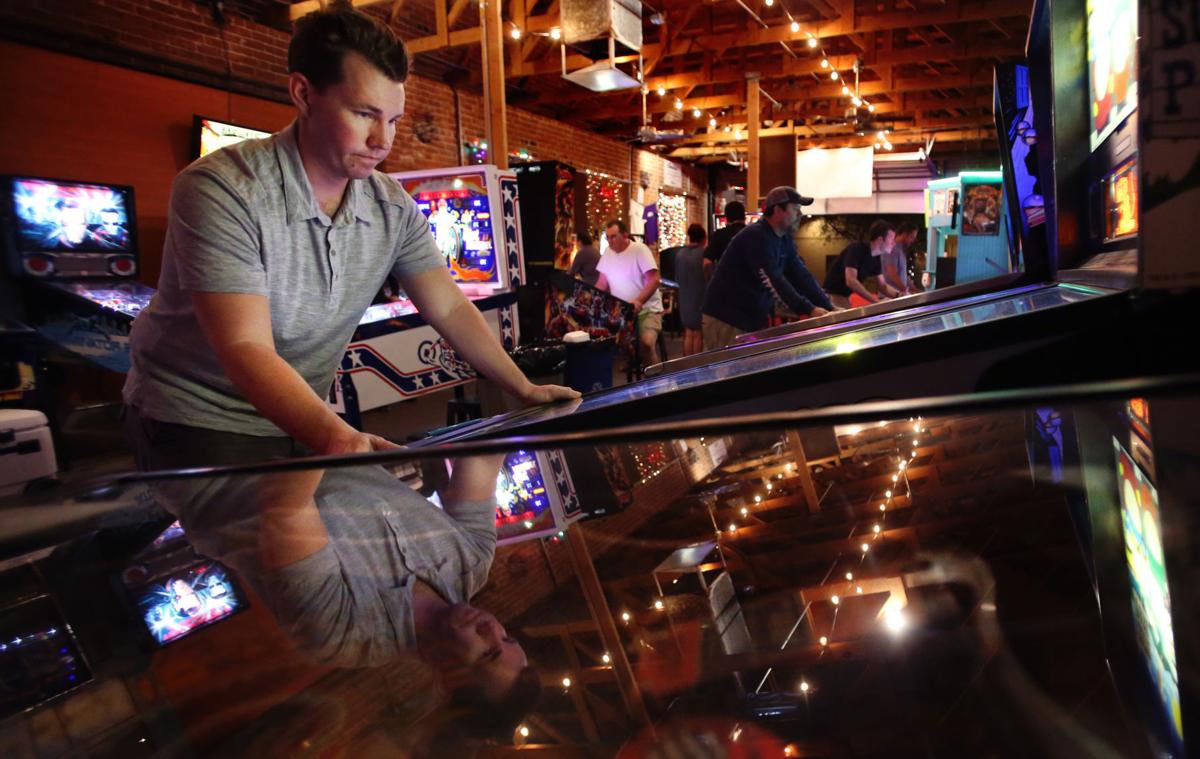 Ben Clement works the South Park machine, one of 10 different pinball machine used in the November session for the monthly tournament at D&D Pinball.

Just off North Fourth Avenue is a warehouse filled with tweens, teens, millennials and boomers playing the silver ball, hoping to beat their high score, blow up a castle or jam out to AC/DC as the metal rock erupts from a pinball machine .

There are neon lights, a whir of sounds and, every once in awhile, a hard slam — and someone gets called for tilting.

This is D&D Pinball.

Arizona’s largest pinball arcade serves as a time capsule of childhood memories and as a pulse for the resurgence of pinball and its growing community.

Inside, 30 machines wait to take your quarters and attention, and to test your patience and skill.

Co-owners Constance Negley and Robert Noble bought D&D a few years ago with the hope of preserving the art, sport and fun of pinball. Noble, who grew up playing the machines, acts as the shop’s go-to pinball wizard and repairman, while Negley runs the books, manages the space and enjoys the social aspect the place offers.

Negley said one of the best parts about pinball is the variety of people who can play, from kids to older folks. The community offers an inviting, playful and social atmosphere.

“Pinball culture is coming back a lot,” said Ben Clement, an Arizona State University graduate and an avid pinball player. “If you asked 10 or 15 years ago, it was dying. It was a low point for pinball and was hard to find public places to play and there was only one manufacturer. Now there are pinball arcades and ‘barcades’ kind of popping all over (nationally) and five or six manufacturers.”

In third grade, Clement shot the silver ball around for fun, but after rekindling his pinball connection in college he bought a machine, then three more and began to play regularly for fun and in competitions.

Today the 36-year-old is one of the regulars who can usually be found at D&D’s monthly competitions and league tournaments. The next one is “Flippin’ With The Greats Pinball Tournament” on Sunday, Dec. 21.

Clacks, clicks, dings and bells are met with grunts, slams, shifts and air kicks. Competition brings out the focus, energy and determination in these pinball wizards. Spectators keep close watch as the board lights up.

The competitions are a mix of experts and beginners. At D&D the mood is usually cheerful, even when a player drops all the balls down the drain in the first 20 seconds.

While many of these competitors say they started playing as children, others had their interest sparked at bars equipped with a machine or two. Some wandered into D&D after a concert.

Neil Feddern, who works in technical sales support at Caterpillar, plays pinball to relax. As a boy Feddern, who grew up in Germany, and his brother, armed with coins from their father or grandfather, spent afternoons at pinball machines.

Glad to have found a pinball arcade in Tucson, he said the coins are the only difference between playing now and when he was a child.

Clement says it’s a relatively inexpensive activity — most games cost under $1 to play — that offers the physical and random nature of any sport.

“I really like the fact that there’s a lot of skill but there’s also luck,” said Derek Jordan, 49, who has played seriously for two years. “So you can play the most skilled player and with some luck you can beat them and I’ve done it. It’s exciting.”

Local bartender Erick Bornmann, 31, said he played pinball in middle school. Since returning to it, he has played obsessively the last four years.

Before D&D he would play the roller-coaster machine at the Surly Wench. Now he’s up-and-coming in the Tucson circuit and plays regularly, hoping to improve and learn more machines.

“It’s weird if a week goes by where I don’t play,” Bornmann said. “Pinball has really grown because of the increasing presence of arcades and barcades. Younger and older are getting into it more than ever before because it’s not just staring into a screen, there’s some physicality.”

While players often come to know the quirks of a machine, competitions mix everything up and you often land with a machine you don’t know.

That intensifies the competition.

Clement said tournaments are also fun because when you’re playing head-to-head against somebody else you can find ways to optimize scoring, and everything becomes more interesting as you get together with other players.

“I like to go headfirst into the tournaments,” Bornmann said. “It’s really like you’re competing against the machine and then somebody else is just doing that better than you.”

Noble said the community is inviting and supportive.

Whether it’s competing for points, state rankings or against your own high score, Negley said pinball is a fun way to compete strategically and enjoy a diverse and lively community.

Noble and Negley play in the monthly competitions, Negley said she does it to have fun. Noble, who has won the last two, said it’s all about mindset and focus.

Chastity Laskey is a University of Arizona journalism student who is apprenticing at the Star.

As a kid, I lost myself on the living room floor with a bookshelf full of games towering before me. As I got older my phone became a window to everything from card games to strategic battles with friends over words and Angry Birds.

For kids like me, who didn’t grow up playing video games or within blocks of an arcade, the complexity of pinball machines can seem interesting and confusing.

No worries. Co-owners of D&D Pinball, Constance Negley and Robert Noble are happy to play with anyone wanting to try it out. For 75 cents I played "Medieval Madness" with Negley, who walked me through the basics. After just three balls I wanted to play more and discover all the machine had to offer. I didn’t quite blow up the castle like she did, but I did play on multi-ball, where I experienced stress like nothing before. I don’t (yet) have any fancy moves or tricks like any of the regular players, but I do want to play again.— Chastity Laskey

Whether you’re a pinball-pro or looking to start, here are some tips and tricks from pinball players:

While there are  bars and indoor sports complexes that offer pinball, D&D is to the game alone.

Tournaments: Usually the third Wednesday of the month. $10 to participate.

More information on pinball competitions around Tucson and the state: tucsonpinball.com, ifpapinball.com

The owner says the fate of the pinball business is undetermined, but could include selling some machines and joining forces with other businesses.

Of course this isn't an exhaustive list, but these are some of the star who have called Arizona home at one time or another.

What do Donald Trump, "The Rock" and Bill Murray all have in common? They all have ties to Arizona Wildcats sports.

What better way to light up the night than a safe, controlled ignition of a gas. Arizona Daily Star photographer Kelly Presnell revisited neon…

Mike LaHaie, left, and Erick Bornmann take their turns on the Lord of the Rings and AC/DC machines, two of 10 pinball machines in the November tournament at D&D Pinball, 331 E. Seventh St.

Cecilia Olea tests her skill against the X-Men machine while competing in a tournament at D & D Pinball.

D&D Pinball co-owner Robert Noble looks into the guts of the machines chosen for the night’s competition, getting it ready for the monthly tournament.

Robert Noble cleans, polishes and fine tunes the X-Men machine to have it in tip-top shape for the monthly tournament.

Derek Jordan anguishes after tilting on his third ball and still needing points on his last machine to make it into the tournament’s playoff.

Mike LaHaie looks at his score on the AC/DC machine for the monthly tournament.

Ben Clement works the South Park machine, one of 10 different pinball machine used in the November session for the monthly tournament at D&D Pinball.