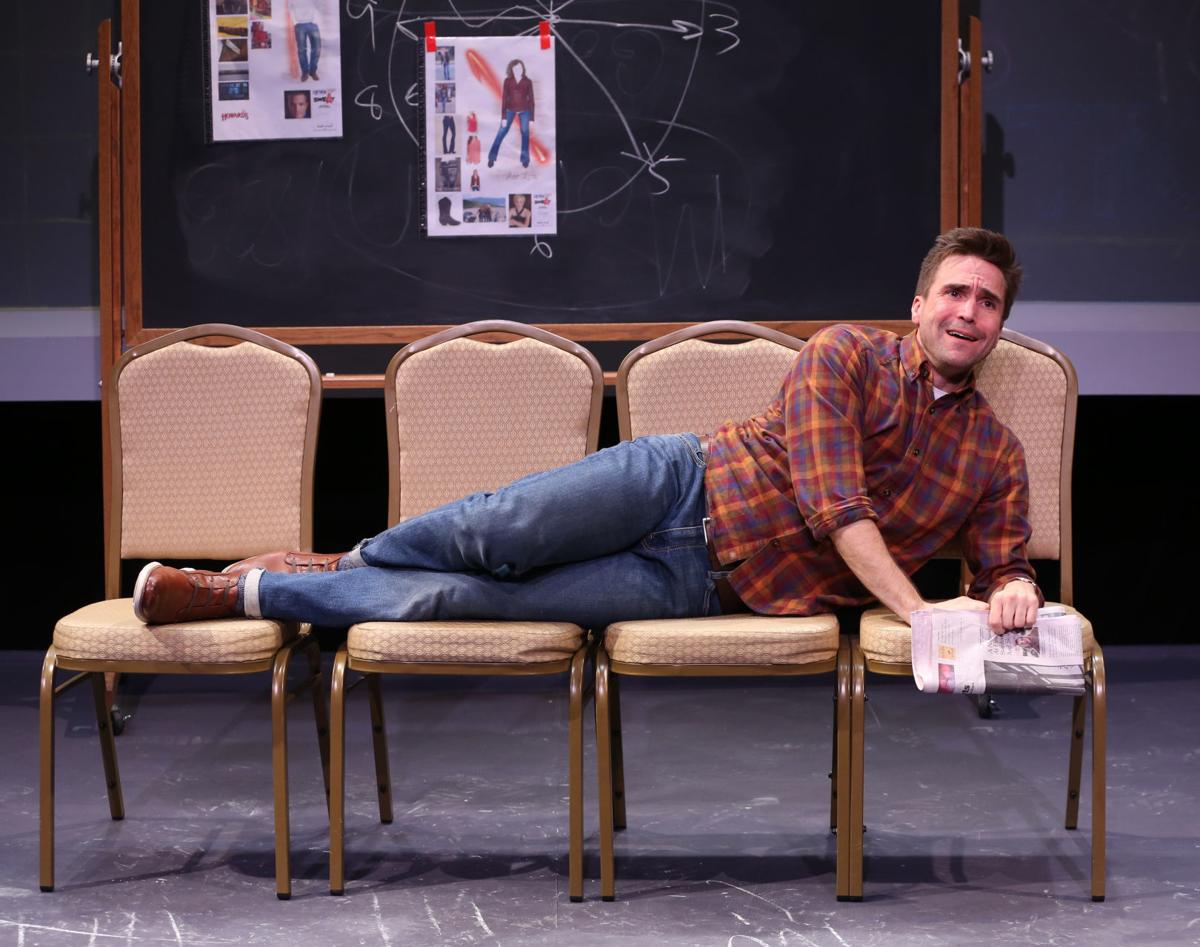 Joe Tapper in the New York production of “The White Chip.” 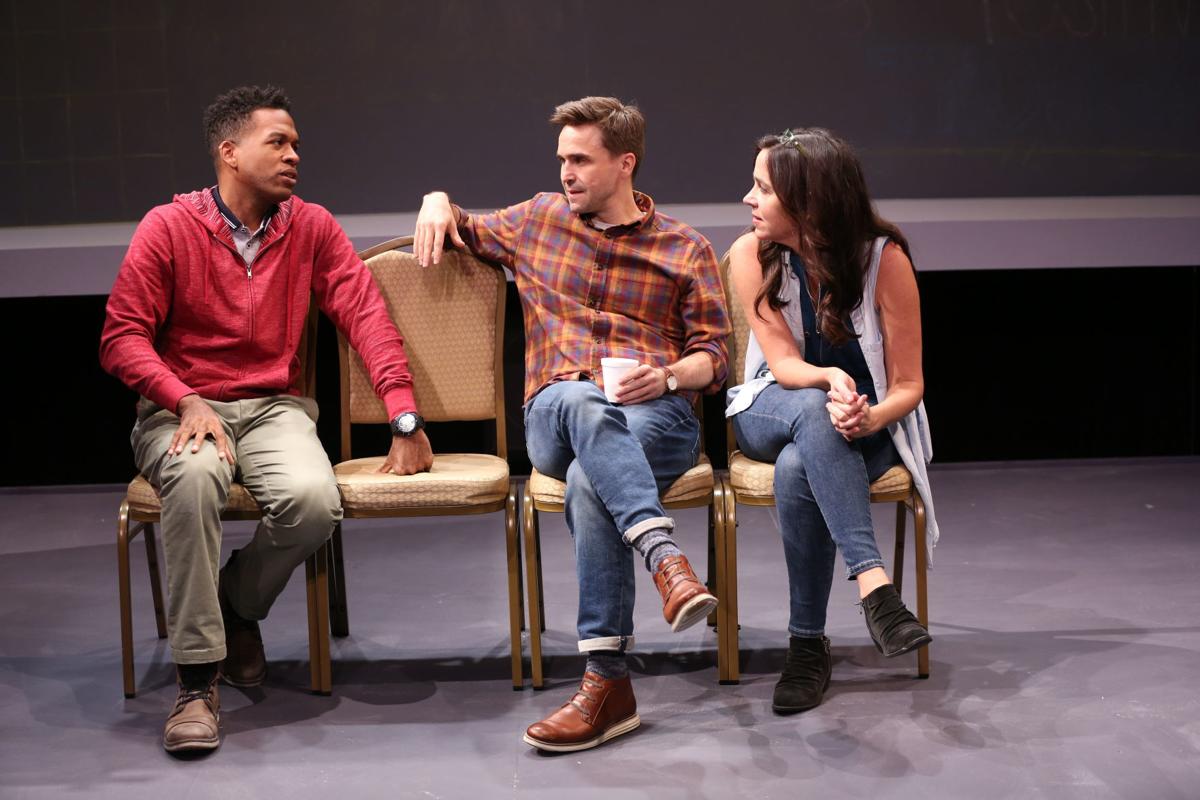 From left, Genesis Oliver, Joe Tapper and Finnerty Steeves in the New York production of Sean Daniels’ “The White Chip.” ATC hopes the play can eventually be staged in Tucson. 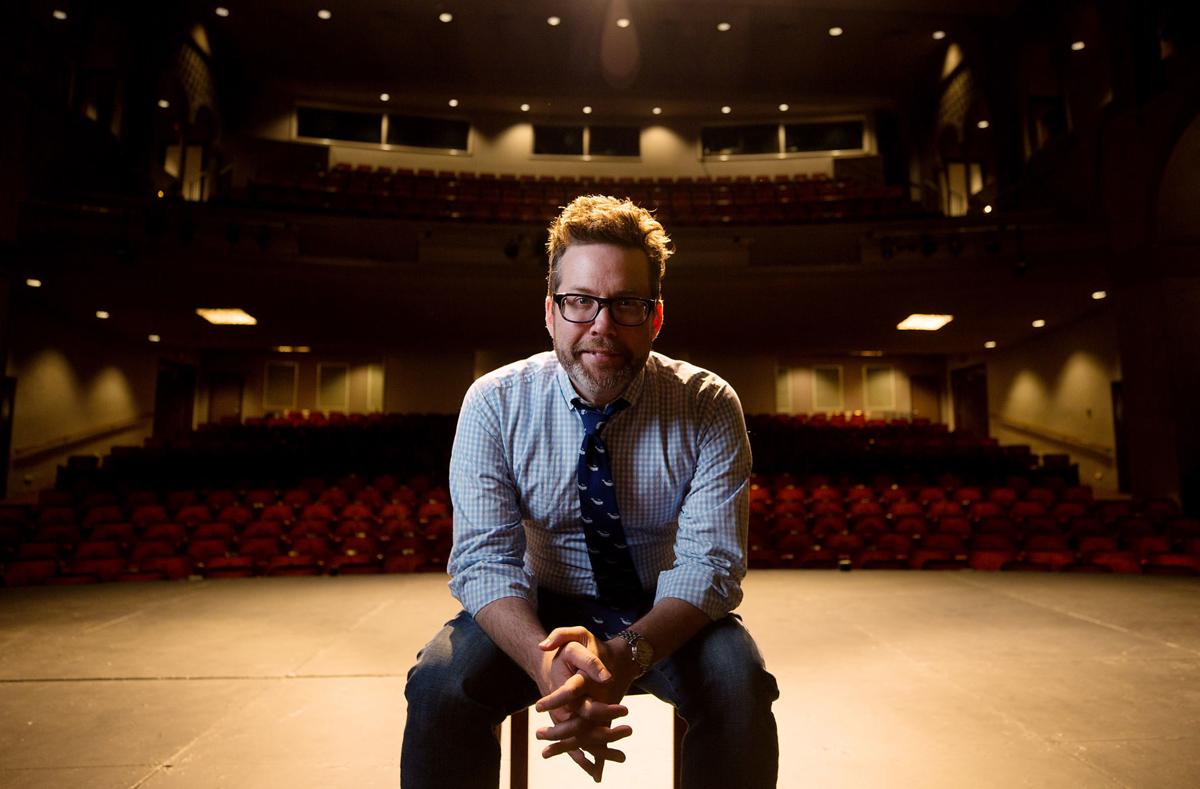 The protagonist in the Arizona Theatre Company-produced “The White Chip,” which received its New York City debut this month, drinks morning, noon and night.

The autobiographical play by ATC’s artistic director, Sean Daniels, is laced with comedy and tragedy and packs a powerful punch.

Steven is an up-and-coming theater director.

He is on the verge of snagging a dream job at a prestigious theater. But he cannot stay away from alcohol.

He mixes vodka with Gatorade to get him going in the morning. He hides bottles of alcohol in bathroom tanks at the office. Lunch meetings are away from the office so he can drink without anyone raising a brow — hey, it’s lunchtime.

We see Steven descend into an alcoholic hell, with no control over the beast that has grabbed ahold of him and won’t let go.

Meanwhile, the guy is funny and charming.

He hopes those traits will help co-workers and friends overlook the slurring words, the work days missed, the obvious drunkenness.

Oh, Steven often tries to crawl out. He has a chest full of white chips — which you get when you attend your first AA meeting. But there was a demand that he look to a higher power. That doesn’t work for Steven; he is more of a science guy.

There is a rawness about this play, and a deep tension and a frenzied despair.

You could almost smell the alcohol seeping off of Joe Tapper’s Steven as he careens further into the illness. And there’s a terrific sense of relief and hope as he is able to overcome his disease.

Director Sheryl Kaller gave the play a killer, almost frenetic, pace which underscored a life reeling out of control. But the pace never sacrificed clarity or robbed the play of its emotional impact.

Tapper wiggled into the skin of Steven and infused him with humanity and desperation. Genesis Oliver and Finnerty Steeves (she was in ATC’s 2008 production of “Enchanted April”) were solid in multiple roles, giving each distinction and full life.

An ATC-produced play in New York City is a big deal. ATC super-boosters Mike Kasser and his wife, Beth, were sitting in the front row at the Oct. 13 opening of the production at 59E59 Theaters (Mike Kasser beamed when he realized one of the characters bore his name).

“This is the direction ATC should go,” said Mike Kasser, long a member of the theater’s board. “The idea is to bring our plays to New York. This is the mecca.”

Billy Russo, ATC’s managing director, hopes “White Chip” can be staged in Tucson — it’s more appropriate for a theater smaller than the Temple of Music and Art main stage, he says, so he isn’t sure where or when. And he thinks producing plays in New York broadens the company’s exposure to artists.

“It’s about connecting ATC to artists around the country that we’ll bring back to Tucson,” he said. “They’ll see that we do things differently.”

“The play really hits home,” the longtime supporter of the company said. “We can all identify with the play; we all know people who have been through this, whether it’s alcohol or drugs. I’m proud of ATC.”

‘Hello, Dolly!’ is a throwback musical that lifts the spirit

The roadshow of the Broadway hit did not disappoint.

Billy Russo, the company’s managing director, has announced he is stepping down from ATC in June, when his current contract is up.

Joe Tapper in the New York production of “The White Chip.”

From left, Genesis Oliver, Joe Tapper and Finnerty Steeves in the New York production of Sean Daniels’ “The White Chip.” ATC hopes the play can eventually be staged in Tucson.