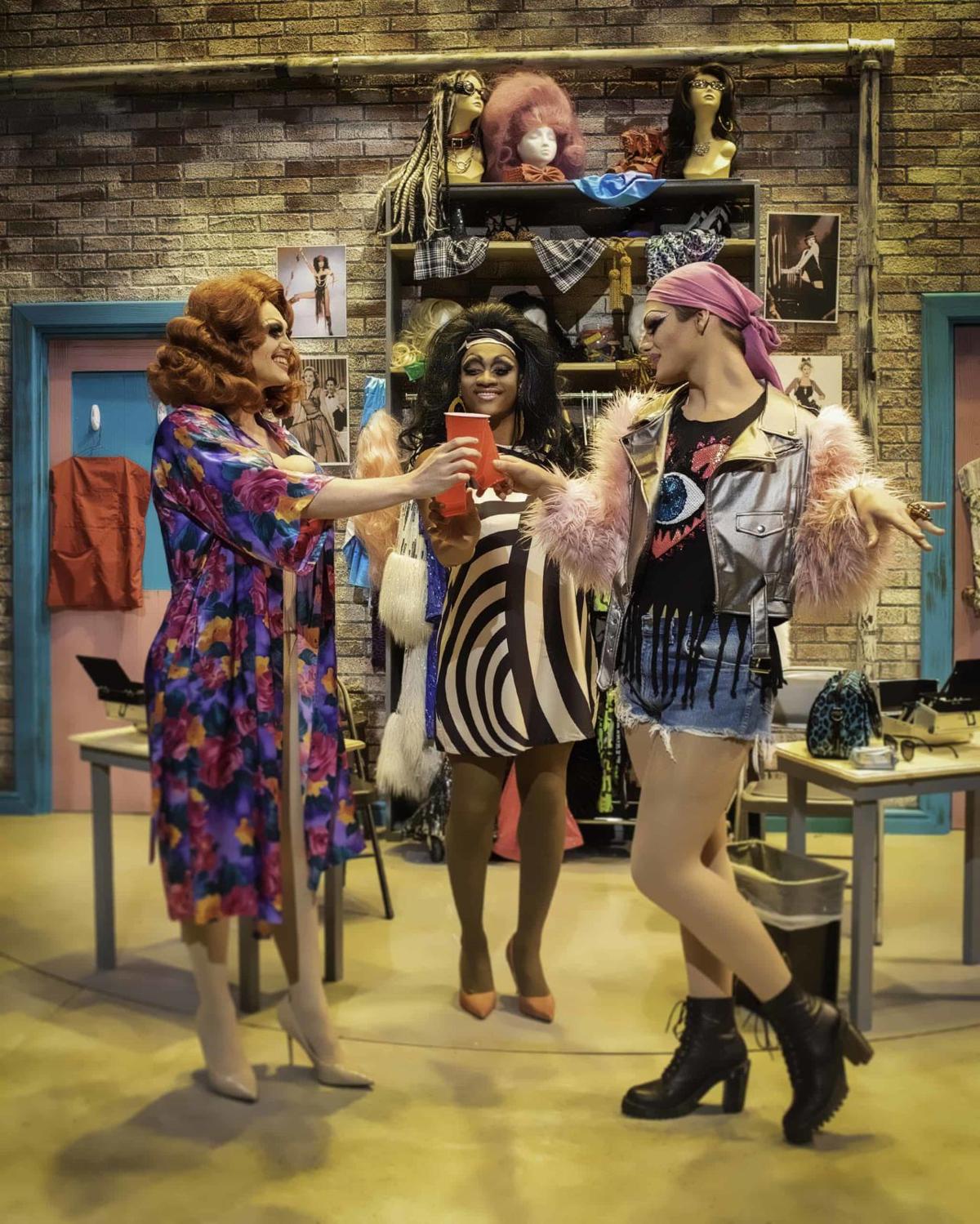 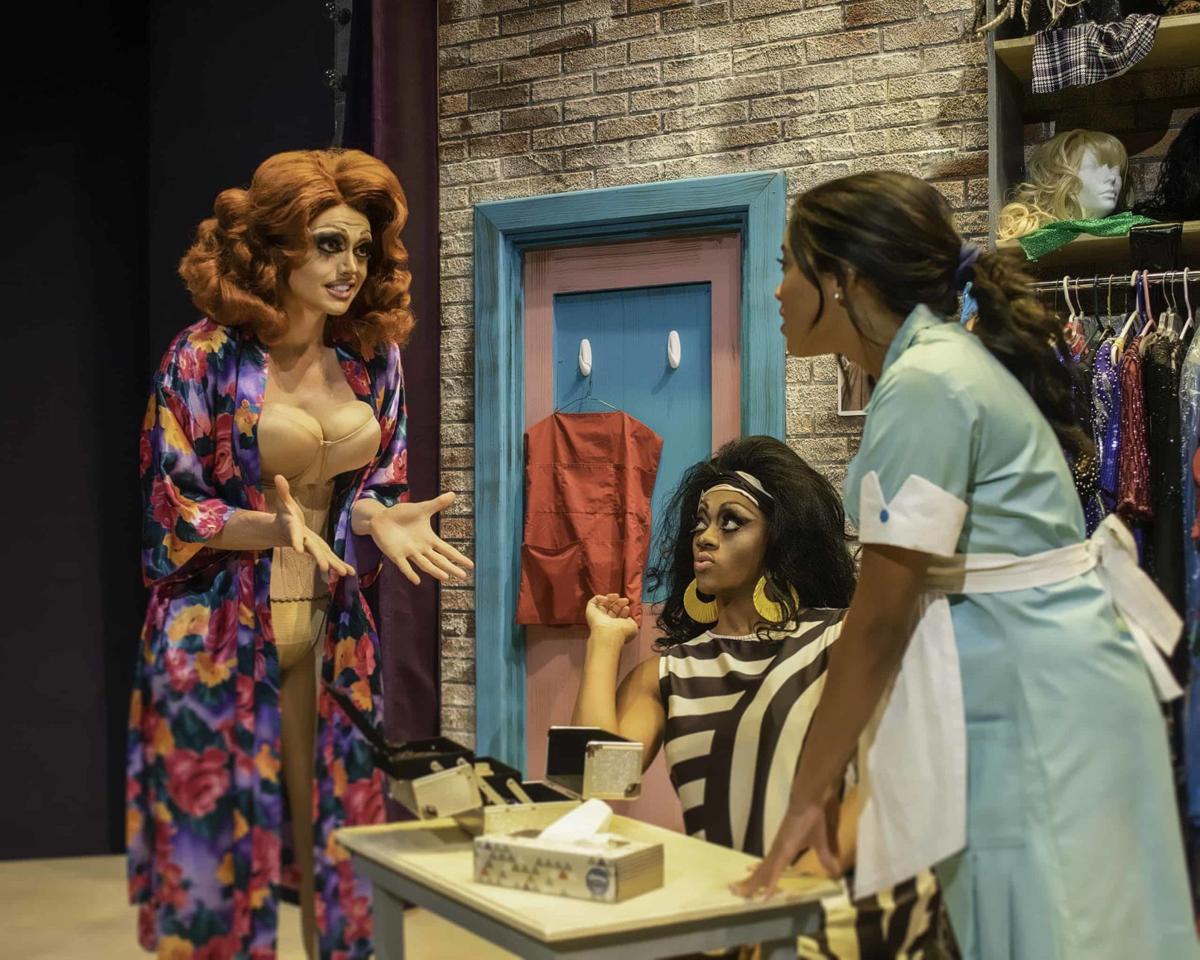 It’s the answer in the sweet, campy and very funny “The Legend of Georgia McBride,” currently on stage at the Arizona Repertory Theatre.

Casey has been trying to pull in audiences to a dive Florida bar with his swivel hips and Elvis tunes.

When it’s clear it’s not working, Eddie, the bar’s owner, calls on his cousin Bobby to bring his Miss Tracy Mills drag persona on over to replace him. This is not good news for Casey — he’s got a pregnant wife at home, the rent is overdue, and his prospects are almost non-existent.

But when Tracy’s fellow drag queen Rexy is too drunk to do her Edith Piaf-on-roller-skates routine, Casey is pushed into falsies, a dress and heels and is told to perform. He objects at first, but then lies to his wife about what he’s doing and discovers his inner drag and a lucrative career.

The Matthew Lopez script is packed with snarky one-liners, and this cast of University of Arizona students embrace the characters — they are mesmerizing and a complete gas.

Dylan Cotter’s overly-optimistic Casey has an innocence that quickly endears him to the audience. His journey from a fumbling Elvis impersonator to a flamboyant drag queen called Georgia McBride is completely improbable (really, no one can take to heels as quickly as he does), but believable nonetheless.

Naphtali Curry in the role of Casey’s drag mentor, Tracy, is wild. Curry’s Tina Turner is downright scary as the actor prances across the stage in high heels lip-synching to “Proud Mary” — you just know there’s a sprained ankle around the next spin. But nope, Curry is the picture of grace.

As is tall and talented Jax Wujek as the often-looped Rexy, whose drag character is Miss Anorexia Nervosa (“It’s Italian,” she explains with a condescending sniff). Wujek is a primo prat faller with pristine timing.

Guy Norris’ Eddie, who introduces the acts, is a natural barker, Lauren Vialva plays Jo, Casey’s wife, with just the right amount of exasperation and tenderness, and Chris Harper’s small role as the couple’s stoner landlord is a hoot.

The 90-minute play is co-directed by Brent Gibbs and Patrick Holt. Holt, who also designed the sparkly costumes with Shaelyn Ellershaw, is a veteran of RuPaul’s Drag Race and his guidance infused the drag scenes with an air of authenticity. It was easy to forget these were students learning their craft; they had the walk, the attitude and the make-up down pat.

The production is at the smaller Tornabene Theatre and scenic designer Clare. P. Rowe fashioned a revolving stage with an apartment on one side and a dressing room on the other. It made the transitions seamless and each had a distinct sense of place.

There’s a sitcomish vibe to this lightweight play, which Arizona Theatre Company mounts in March. And it gives just a few passing moments to the difficulties of a drag queen’s life. But times are tough out there; we could use some laughs. This definitely provides them.

What: Arizona Repertory Theatre’s production of “The Legend of Georgia McBride”

Run time: 90 minutes, with no intermission