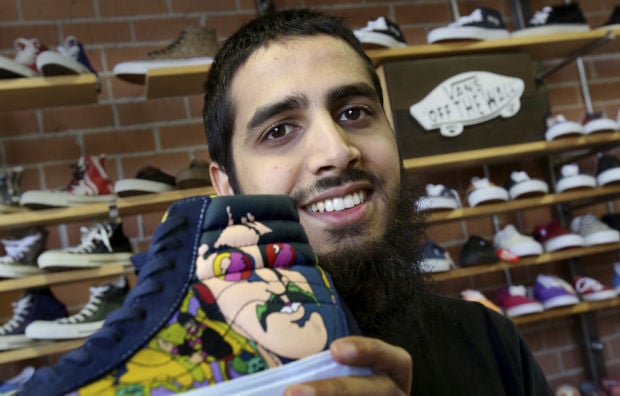 Store owner Mufaddal Dawoodbhoy cradles a pair of Vans with the image of John Lennon. 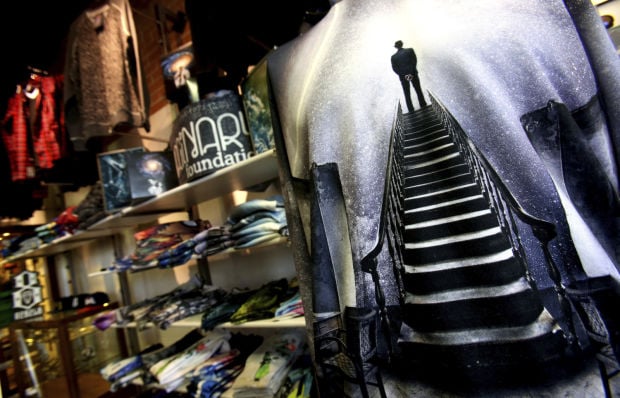 Dress Code carries streetwear and band paraphernalia inspired by music from across generations and genres. Above is an Imaginary Foundation T-shirt. 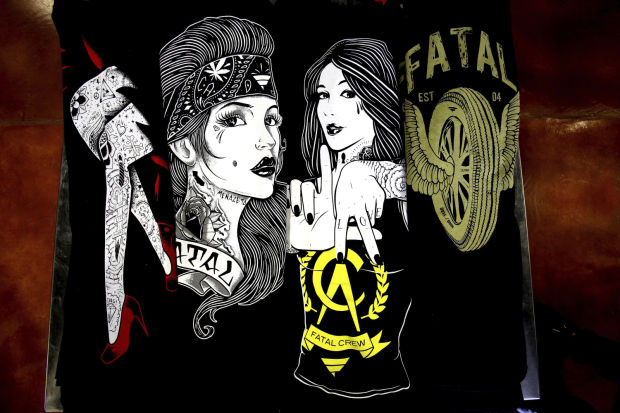 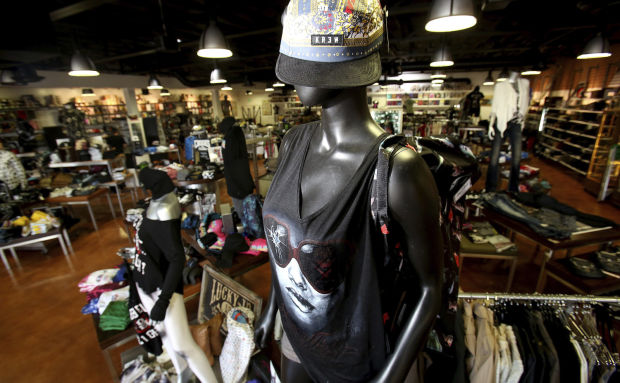 A KR3W cap, Sullen shirt and Herschel bag complete a look at Dress Code, 2636 E. Broadway. The Dawoodbhoy family opened the store in 2006 after moving here from Los Angeles.

Mufaddal Dawoodbhoy wants to bring the record-store vibe back.

And he’s doing it with fashion.

“When we started out, we wanted to make a place where people can come and talk about music,” said Dawoodbhoy, 28, whose family owns the clothing store Dress Code. “We started out in an era where record stores started to fade away and that whole record-store environment is no more. I am trying to bring that back.”

Dawoodbhoy and his brothers, Murtza and Mustafa, opened Dress Code in 2006 after moving from Los Angeles in 2005.

The store, at 2636 E. Broadway, features duds inspired by music from across generations and genres.

“It could look like distressed jeans with an old-school rock shirt, it could look like some raw, slim-fit khakis with a science-based, like Imaginary Foundation, T-shirt with an over shirt over it, it could be a lot of things,” said Dawoodbhoy about the music-inspired fashion. “You can’t forget about the Chuck Taylors and the Vans.”

Dawoodbhoy believes that the locally owned clothing store can bring back the culture of record stores by allowing music lovers from all generations to come in to the store and share their love of music.

The store carries more than 48 brands in the store, and does about 90 percent of its sales online. Dawoodbhoy thinks the larger variety allows Dress Code to reflect on how people listen to music today.

Dress Code aims to mix these different genres and generations of music-driven fashion and create something unique.

Music also is a clue to what his customers want.

“I have customers coming in every Saturday,” he said. “One of the first things we ask customers when they are looking for a T-shirt is what kind of music they listen to. So we can recommend them, not only T-shirts that we have with that band, but also T-shirts that they may like just from the top of our head. If they like Metallica they may like Megadeth shirts.”

The music theme makes sense for the family. The brothers have always been close, and music was a common bond.

With their love for music and fashion, the Dawoodbhoy family believes that music-driven fashion is something that Tucson has never seen before.

“We mix brands, we mix music with brands, we mix different genres and (people) haven’t seen anything like this, not even in L.A.,” he said. “We have something that is unique, not only in Tucson, but nationwide.”

Former Fleetwood Mac guitarist is playing a show at Fox Tucson while Marie Osmond is coming to Casino del Sol.

Tale of two lists: Tucson singer-songwriter Linda Chorney is up for a Grammy

Tucson singer-songwriter Linda Chorney is nominated for a 2022 Grammy, but when she went missing from the nominee list, there was much confusion.

Riley Green and Florida Georgia Line also on the lineup. Reserved seats are sold out, but general admission tickets are on sale now.

It's the Fabulous Thunderbirds frontman's first Tucson show since he headlined the 2019 bash. Tucson' own Michael P. and the Gullywashers open the show.

Civic Orchestra of Tucson performing an all-American concert with works by Bernstein, Dvorák

Admission is free to "Made in America II," which celebrates contemporary works composed by American or composed in America.

The annual event has raised more than $140,000 and eight tons of food over the past 14 years to benefit the Community Food Bank of Southern Arizona.

Three members of Costner's band, Kevin Costner & Modern West, live in Tucson so the chance to play the AVA at Casino del Sol was a no-brainer.

Say it ain't so, Jake! Ukelele virtuoso has yet to try Tucson's classic Sonoran dog

It's the first time she will perform in Tucson since big sister and Sisters Morales partner Roberta died in August.

Store owner Mufaddal Dawoodbhoy cradles a pair of Vans with the image of John Lennon.

Dress Code carries streetwear and band paraphernalia inspired by music from across generations and genres. Above is an Imaginary Foundation T-shirt.

A KR3W cap, Sullen shirt and Herschel bag complete a look at Dress Code, 2636 E. Broadway. The Dawoodbhoy family opened the store in 2006 after moving here from Los Angeles.