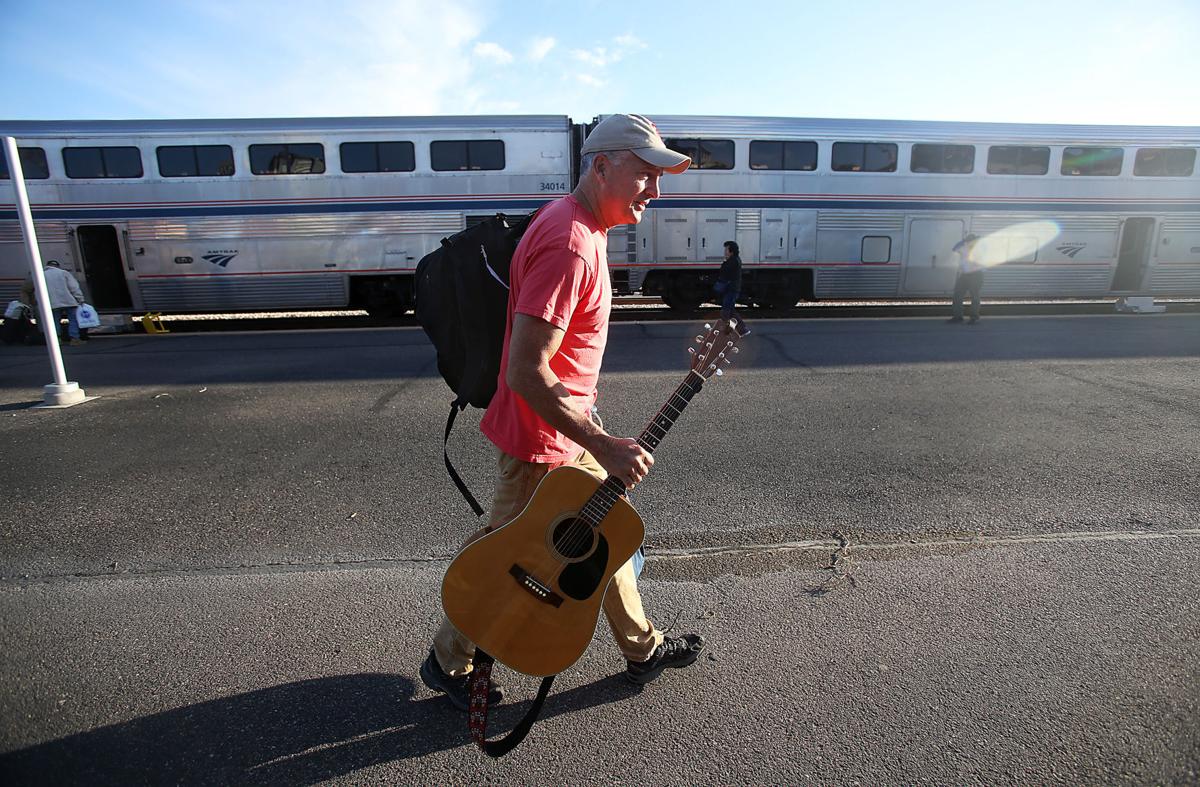 To get to the University of Arizona, Joe Coughlin hops a bus to Los Angeles, then takes a 9ƒ-hour Amtrak ride to Tucson. 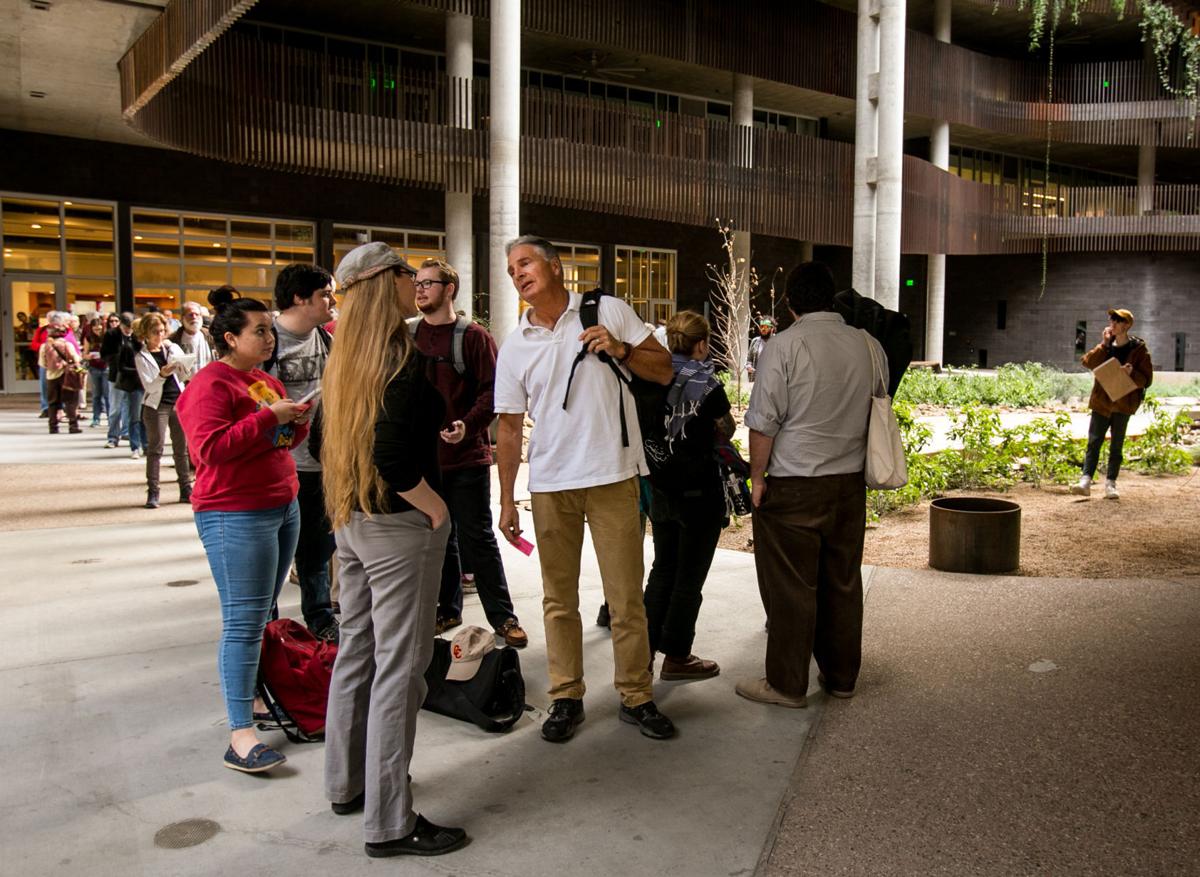 Joe Coughlin, center, who commutes from Bakersfield, California, figures the $225 UA course is costing him around $4,000.

Joe Coughlin is a front-row kind of guy.

In fact, that’s one of his big rules when it comes to school.

“Studies show there’s a one-letter grade difference between the front and back,” he says. “In front, there are no distractions. You’re right in front of the teacher.”

He’s also always the first to queue up for POL 150C2: “What is Politics?” (Yes, there’s a line to get into class.) This is even more impressive when you know about Coughlin’s complicated commute to take the University of Arizona’s general education course: He hops a bus and then rides a train from … Bakersfield, California.

“It’s kind of an adventure to me,” says Coughlin, 63, the married father of three who owns Coconut Joe’s, a beach-themed restaurant that’s been a Bakersfield landmark for nearly 30 years. It’s the kind of place where servers have the regulars’ orders into the kitchen as soon as they walk in the door.

“I immediately got on the phone,” says Coughlin, who’s read many of Chomsky’s books and considers the man his hero. “I didn’t know if outsiders could get into the class. I was going to talk my way in.”

Turns out, community members — even if they’re from a community 598.4 miles away — are more than welcome and account for 278 of those enrolled in the class, according to the UA. Another 232 are matriculated students. People start lining up at 4 p.m. for the 5 p.m. lecture. No one waltzes in late.

“It’s an honor to be in the class,” says Coughlin, who has two daughters in college. “We treat it as such.”

Coughlin, who has always preferred road and rails to planes, has pretty much the same weekly travel itinerary. He leaves Sunday night to drive from his home on a bamboo-studded acre in Bakersfield for Los Angeles’ Union Station. He folds his 6-foot-1 frame into a sleeping car — which costs more, $200-ish versus $47 to spend the night upright in a seat — and snoozes his way across state lines.

Then, he hightails it over to Prince of Tucson RV Park. Yeah, one day he skipped the bus and train and drove his RV over after finding out the hard way that February is high season here.

“The gem show ate up every hotel room in town,” Coughlin says, forcing him to once take refuge all the way in Casa Grande and another time at a motel so skeevy that check-in and check-out happened pretty much simultaneously.

“I’ve had umpty-umpteen problems, but it’s been fun,” he insists. “This experience has taught me to not have to be in control of everything. I tend to plan things out. I’ve become more easygoing.”

Like, not flinching when his RV engine blew up on Grant Road. Or, the time he trekked all the way to Bakersfield, only to turn around and then drive 10 hours round trip to San Francisco. As part of his treatment for chronic myelogenous leukemia, he must head up there to get his blood drawn once a month. Now that, he says, was a commute.

Coughlin, who regularly speaks at schools and in seminars about life lessons through what he calls “Coconut College,” figures the $225 course is probably costing him around $4,000. He hasn’t yet tired of the grind because he gets so much out of the class. “It’s just eye-opening,” he says. “It’s so mentally stimulating.”

This is a dude who really values education.

Not that you’d guess from his high school transcripts. A solid C-minus student, college wasn’t in the cards. His parents didn’t encourage their three kids to go. The youngest, Coughlin says he “crashed and burned” as a young adult. He was stocking green-bean cans in a grocery store in Virginia without much of a future when he joined the Navy Reserve at 24.

Two years later, armed with a top-recruit award, Coughlin talked his way into a meeting with the dean of Virginia Commonwealth University, promising if he didn’t earn straight A’s, the dean could kick him out. Coughlin had a 3.9 GPA when he transferred to Arizona State University the following year. Don’t hold his Sun Devilness against him, though. Coughlin — who met his wife, Leah, there — says he often thought about transferring to the University of Arizona. He much prefers the campus and vibe in Tucson.

Between lectures, Coughlin bides his time doing homework, shopping Urban Outfitters’ book section and dining at La Cocina or Frog & Firkin. You’ll spot him on campus toting a black backpack and Takamine guitar, which he taught himself to play by watching YouTube videos.

Because of Coughlin’s always-hunker-down-in-the-front-row rule, he’s actually sat next to Chomsky, who joins the students in the audience for Waterstone’s Tuesday lectures.

“I don’t know of anybody I more respect,” Coughlin says. “He has no agenda, no ideology he’s pushing. He’s coming from the perspective of making the world a better place.”

While he’s talked to Waterstone, Coughlin has yet to chat up Chomsky.

“What I’d really like,” Coughlin grins sheepishly, “is to get a picture with him.”

Spoken like someone who’s a card-carrying member of the Noam Chomsky Fan Club, which, he is. In a way. Coughlin has a blue plastic card with his name printed on it in white letters that must be scanned to prevent crashers from sneaking into the popular class.

Coughlin smiles. “It would be easier to get into Fort Knox.”

The class taught by Noam Chomsky and Marv Waterstone is both a general education course for University of Arizona undergraduates and a Humanities Seminars class for adult community members.  This is the first intergenerational course of this type to be given at the UA, and one goal was to connect students from multiple generations and political outlooks to stimulate ideas and dialogue.

The UA Humanities Seminars Program will offer month-long courses in May, June, July, August, given by UA professors. See the website hsp.arizona.edu for class descriptions including “Meet the Professor” videos and registration information. The program will have a booth at the Tucson Festival of Books. Registration begins March 13. Class topics range widely: history, literature, archaeology, music, classics, science, and more.  The cost of the courses ranges from $85 to $150 depending on the number of class sessions.

Justin Bieber leads the nominees of the MTV EMAs

Justin Bieber leads the nominees of the MTV EMAs

Librarian Karen Greene aims to reintroduce others to the joys of low-tech living.

Enough with the passwords already

New presidio tour is an eye-opening look at Tucson's beginnings.

Second SundAZe @ TMA and Picture This! offer free admission and plenty to do at the Tucson Museum of Art.

Opposition to president is broad but can be undercut by scenes of conflict and vandalism.

Audience inside church often interrupts the congresswoman, asking her to keep answers short.

Tucson weather: This week's forecast brings a little bit of everything

A pair of storms will roll into town, dropping temperatures, which will return to the 80s by week's end.

He ill begin this fall, and teach in the spring semester.

To get to the University of Arizona, Joe Coughlin hops a bus to Los Angeles, then takes a 9ƒ-hour Amtrak ride to Tucson.

Joe Coughlin, center, who commutes from Bakersfield, California, figures the $225 UA course is costing him around $4,000.