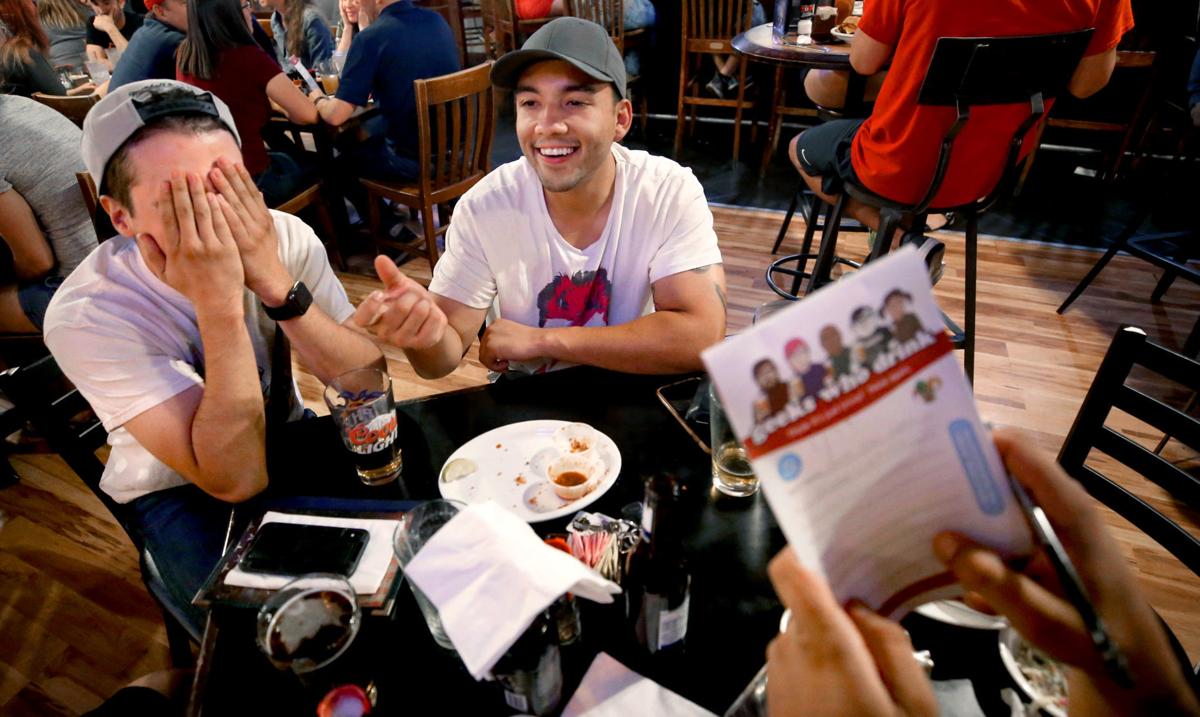 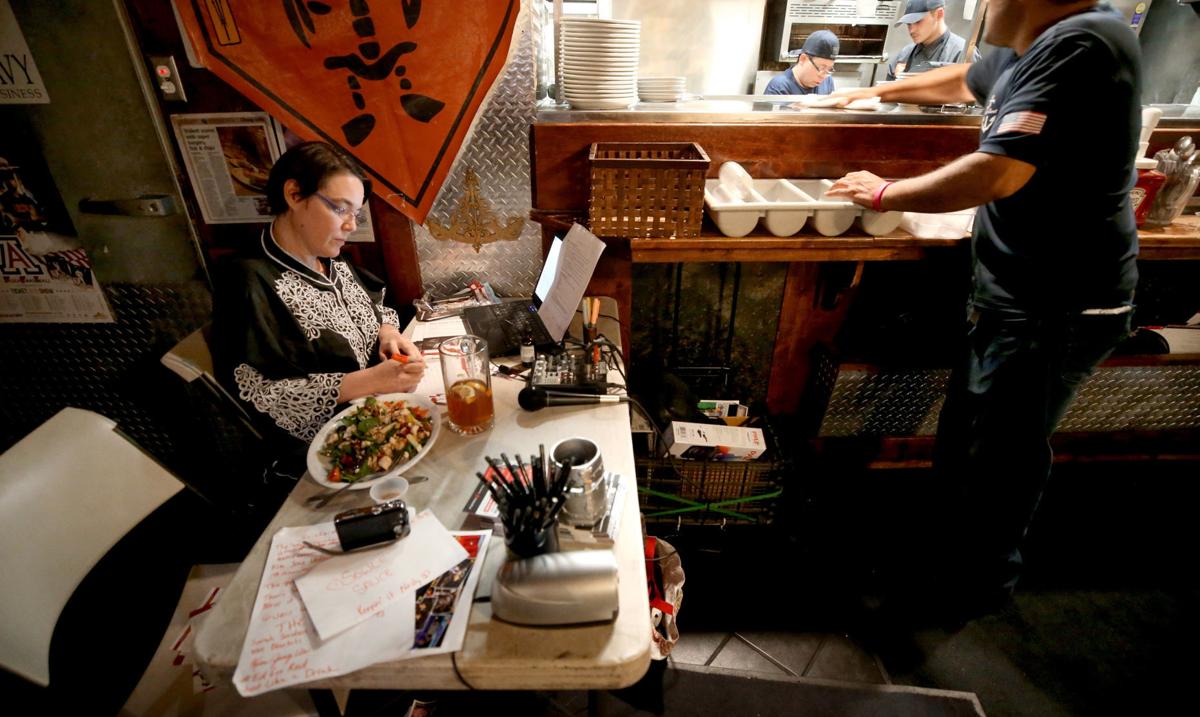 Quiz master Kirsten Cummins, or Lady Busty, tallies up the scores between rounds of questions during Geeks Who Drink trivia night at Trident Grill, 2033 E. Speedway, Wednesday, May 16, 2018, Tucson, Ariz.

A Moscow Mule is a mix of vodka, ginger beer and what fruit juice?

Who sings the iconic song “We Got The Beat?”

We’ll get to the answers later, but if those questions intrigue you in the slightest, you might want to consider spending a summer evening or two attending trivia night at a local bar.

Many Tucson bars and eateries are home to weekly trivia nights, most of which are hosted by the national Geeks Who Drink organization. During trivia nights, or “pub quizzes” as Geeks Who Drink call them, you’ll run into questions like the ones above, in addition to queries on pop culture, history and literally anything and everything in between.

During a Geeks Who Drink trivia night last week, for example, one round was centered around “stuff you might see at the Renaissance Festival.”

Plus, every Geeks Who Drink trivia night is different. They say that questions aren’t repeated for at least a full two years. That’s a lot of trivia to go through.

If you happen to attend a Geeks Who Drink trivia night, one round will also include a number of song clips blasted through the speakers. Guess the song title correctly and get points. There are speed rounds and visual rounds, too, equating to about 70 questions throughout the night. It’s so much more than just a boring question-and-answer game in a noisy bar.

All in all, trivia nights make for an entertaining two hours of light-hearted fun. Plus, drinks and food (depending where you’re at) are basically at your beck and call.

You don’t normally need to sign up in advance to play, but it’s probably a good idea to call the bar or restaurant ahead of time or show up early, especially if you’re playing in a group — and let’s be honest, it’s not as fun to go alone.

And even better: it’s free to play, though it’s not free to eat or drink. Prizes are also given out to the best trivia masters, but really, it’s all about the bragging rights.

And even if you absolutely suck at trivia — or if you’re just not a “quizzard” as Geeks Who Drink say — it’s still fun to go out, have a drink, and people-watch. At a recent trivia game, there were countless people hilariously mouthing curse words when they were stumped on an answer. More genteel, older gentlemen scratched their beards or wrinkled their eyebrows when they didn’t have an immediate answer to jot down.

The night is even more fun when the moderator collects everyone’s trivia sheets and reveals the correct answers. So many energetic high-fives and ear-to-ear grins. And the occasional playful fist to the table when a team didn’t do as well as they had hoped.

Oh, and the answers to the questions? Alabama, lime and The Go-Go’s.

Public Brewhouse, a hidden craft brewery located behind Ermanos on North Fourth Avenue (with access on Hoff Avenue), has trivia every Monday at 8 p.m.

You can find trivia every Tuesday at 8:30 p.m. at this long-standing University Boulevard hangout.

Go up against the crowds downtown at Hotel Congress trivia, Tuesdays at 8 p.m.

If you are midtown, Sentinel Peak on East Grant Road can satisfy your trivia needs, Tuesdays at 7 p.m.

This craft beer joint, a spinoff of the video rental shop, Casa Video, has movie-themed trivia on the last Tuesday of every month, starting at 7 p.m.

East-side trivia fanatics have a home at Arizona Beer House, which hosts a trivia night every Wednesday at 7 p.m.

Find trivia on Wednesdays at 8 p.m. at Gentle Ben's, within walking distance of the University of Arizona.

The original Trident holds a trivia night every Wednesday starting at 8 p.m.

Test your general trivia knowledge at Canyon's Crown Restaurant every Thursday at 8 p.m.

You think Tucson shrivels up in the summer? We beg to differ.

Learn to golf or perfect your game.

Common witnesses in the two cases will only undergo one deposition.

Frank Crary is credited with saving the lives of many fellow soldiers during an intense battle in the Vietnam War.

Neighborhood residents, friends and family of fallen officer agree on compromise to place a memorial plaque rather than rename Alvernon Park.

Greg Hansen: UA-UCLA showdown the latest chapter in 'one of the biggest rivalries'

UCLA’s softball operation was once so feared that the Bruins’ historically dominant pitcher was named Doom.

If approved unchanged, the budget would drop property taxes by 12 cents.

Grocery store clerk is belled for kind way with customers 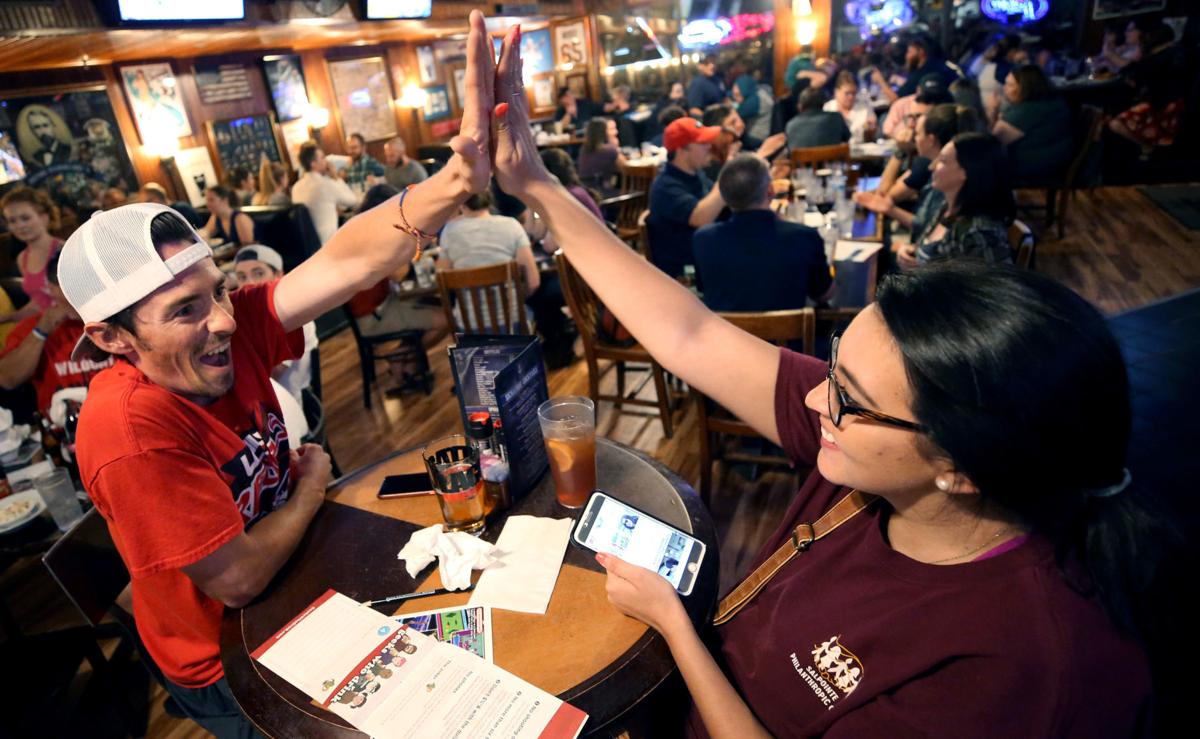 Erick Sowle, left, and Elyse Abbott celebrate a correct answer at Trident Grill. Generally, it’s free to play trivia, but you have to buy your own food and drinks.

Quiz master Kirsten Cummins, or Lady Busty, tallies up the scores between rounds of questions during Geeks Who Drink trivia night at Trident Grill, 2033 E. Speedway, Wednesday, May 16, 2018, Tucson, Ariz.