What would the Star Trek world be without its paradoxes? In the Season 2 finale, Picard (Patrick Stewart) and his team stuck in 2024 must solve this riddle in order to save the future: “To succeed, there must be two Renée [Picards]: One who lives and one who dies.” The action is plentiful as they race to stop Soong’s (Brent Spiner) plot to thwart the Europa mission, and when the dust settles, we’re reminded of Trek’s trademark humanistic philosophies, where absolution and forgiveness chart a path to a more hopeful future. If I didn’t know a third and final season was coming, I’d have been satisfied with this as a series finale. 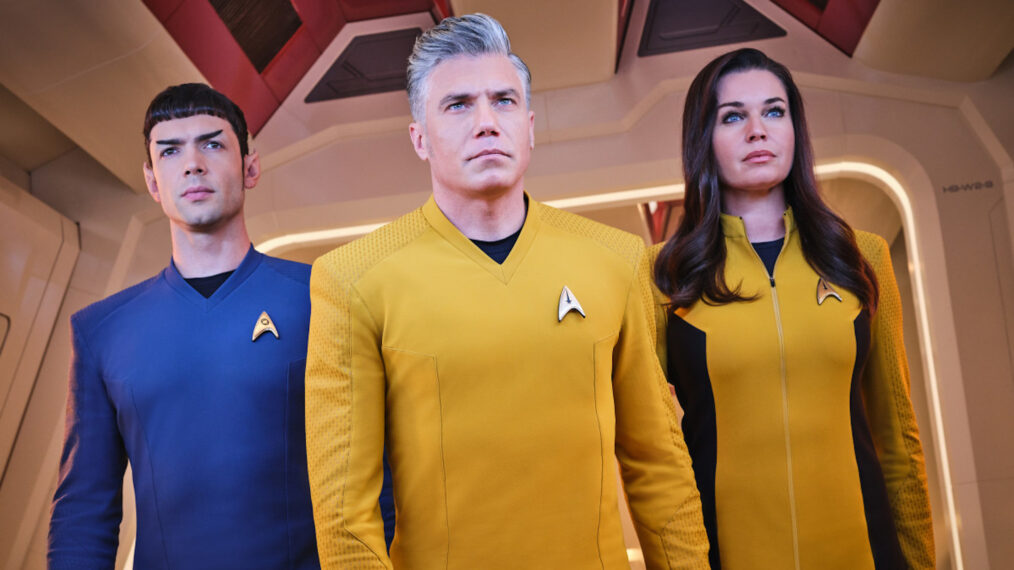 When one Trek window closes, another portal opens. The latest spinoff takes us back to the days before Capt. Kirk, when Capt. Christopher Pike (Anson Mount) led the U.S.S. Enterprise on missions of galactic exploration. Introduced in Season 2 of Star Trek: Discovery, Pike is joined by Rebecca Romijn as Number One and Ethan Peck as Science Officer Spock. May they all live long and prosper. The year’s most life-affirming comedy ends its first season with Julia Child (the magical Sarah Lancashire) considering hanging up her French Chef apron after the first season finishes filming, stewing in an existential crisis following her encounter with fiery feminist Betty Friedan. We know her public-TV show will continue—and HBO Max just renewed Julia for a second season (yay!)—but it’s still worth it to watch her tackle one more dish, a chocolate soufflé, and remind her audience: “All you have to do is plunge in… that’s the key not only to the kitchen but to life itself.” The streamer’s funniest comedy returns for a second season, with the one-hit-wonder 1990s girl group in “album mode” as they prepare to go back into the studio. The road will not be without bumps—including a knee injury for the self-sacrificing Gloria (Paula Pell)—as they sign aboard the Property Records (as in Property Brothers) label. Another hitch: They’re given only six weeks to record a new album, to be launched alongside the Property brand’s new line of scented hammers. (Yes, the barbed jokes fly freely on this show.) Even the ultra-ambitious Wickie (Renée Elise Goldsberry) may have to tap into “human mode” as these sisters in song chase success on their own “we are woman, hear us roar” terms. The Tony-winning Goldsberry and Pell are in great company with bandmates Sara Bareilles and Busy Phillips. How much Mike Myers is too much? Is that even possible? We’ll find out with his latest comedy venture, a six-episode series featuring the Saturday Night Live veteran tackling eight, count ’em, eight, outrageous characters. Launching as Myers’ Austin Powers film franchise marks its 25th anniversary, The Pentaverate tells of a secret society of five men who have manipulated world events for centuries and the Canadian journalist (Myers as Ken Scarborough) who sets out to expose them. Among his other characters: a media mogul patterned after Rupert Murdoch, a rock ’n’ roll manager, an ex-Russian oligarch and a right-wing radio host. Guest stars include Ken Jeong, Keegan-Michael Key, Debi Mazar and Absolutely Fabulous diva Jennifer Saunders. It’s been a minute—OK, a month—since the last new episode of the long-running hospital soap, and they make up for lost time in a busy hour that features the return of Kate Walsh as Addison Montgomery. She’ll no doubt savor all the drama as Owen (Kevin McKidd) returns to work, Meredith (Ellen Pompeo) clashes with Richard (James Pickens Jr.) and Bailey (Chandra Wilson) deals with a miffed Catherine (Debbie Allen) who’s none too pleased that some of her Foundation hospitals are being audited. Another series signs off for the season as Kat wraps its second round with a guest appearance by Ted Wass making for a mini-Blossom reunion. He played her dad on the ’90s sitcom, and now appears as Kat’s late father in a flashback that helps the present-day cat café owner evaluate her life. Julia Sweeney guests as her therapist, helping Kat keep her anxiety under control as she conjures a plan to save her business. Crossover alert, when SVU’s Benson (Mariska Hargitay) teams up with her former partner Stabler (Christopher Meloni) to find a 9-year-old girl they suspect was abducted to strike fear in a member of the corrupt cop squad known as the Brotherhood. Benson’s SVU colleague Rollins (Kelli Giddish) also lends her expertise to the case.

100 worst TV shows of all time, according to IMDb

Here's a look at the 100 worst TV shows of all time, from “The Bold and the Beautiful” to “Toddlers and Tiaras.”

Next year, Christian Cooper will be back on television on his own terms: To showcase his passion for birdwatching on National Geographic.

Worth Watching: This Was ‘Us’ and More Finales, Ricky Gervais on Netflix, Golden Gate ‘Plague’ of 1900

As the traditional TV season winds down, no series finale looms larger than that of "This Is Us" as the Pearsons look back and ahead while they honor their late mother.

The actress, who plays Officer Reina Vazquez, also discusses the responsibility of wearing the badge.

The season is over for NBC’s "Law & Order" lineup, ABC’s "Station 19" and "Big Sky," FX’s "Atlanta" and "Halo" on Paramount+, while canceled CBS comedies "The United States of Al" and "How We Roll" take their final bow.

Texas school shooting: Olivia Rodrigo calls for stricter gun laws in the US

Texas school shooting: Olivia Rodrigo calls for stricter gun laws in the US