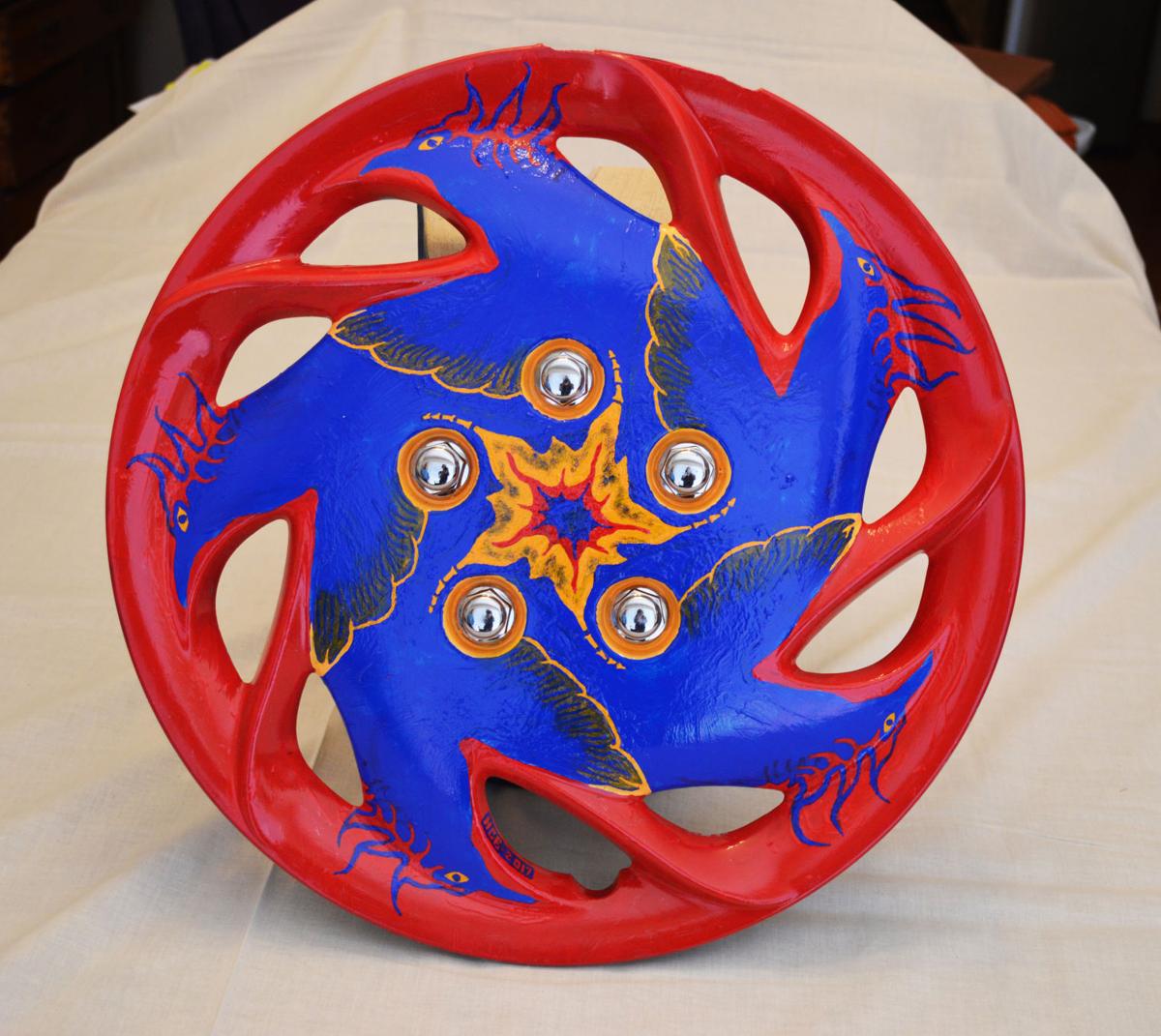 Like a phoenix rising from ashes, Hector Estrada gives these once-ugly hubcaps that were left behind a new life as art. 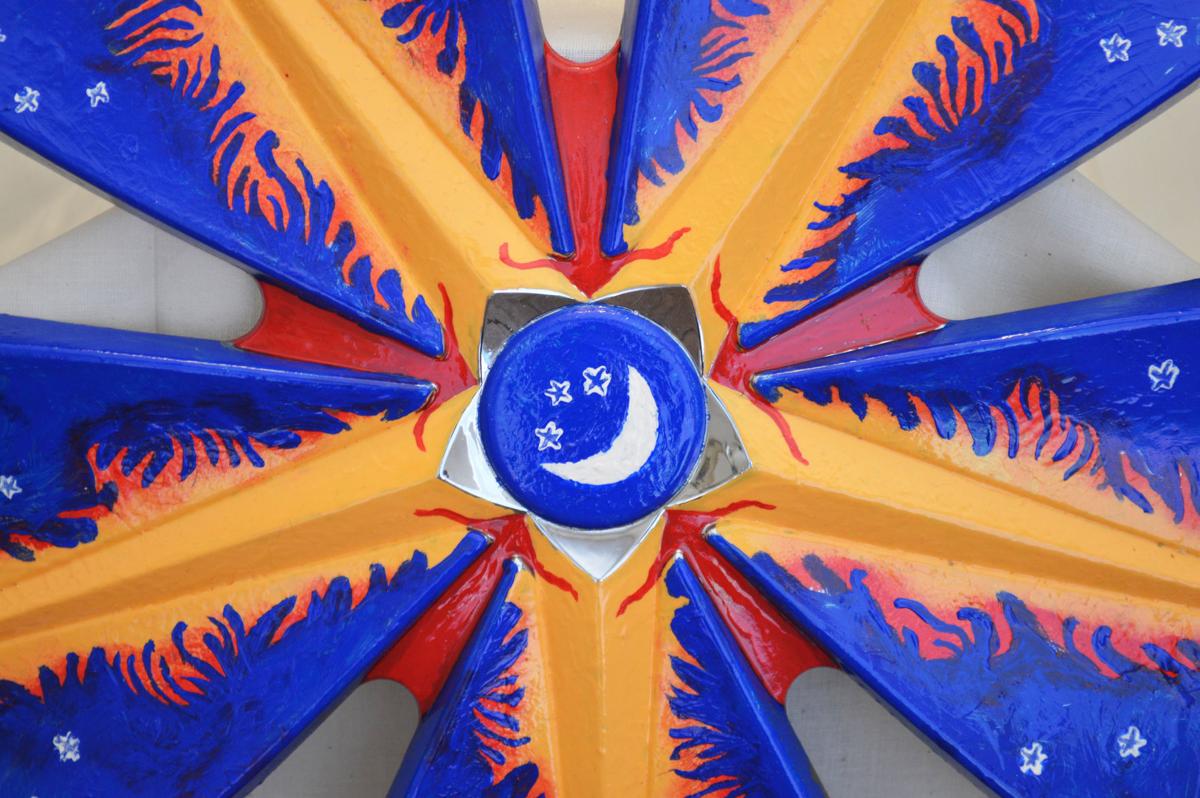 The center of this hubcap has a moon and star design with the silvery color of the hubcap showing through in a star around the center.

After spending nearly 40 years in the legal profession, including more than eight as a U.S. District Court Magistrate Judge, Hector Estrada has turned to a more zen occupation in his retirement.

Years ago, he began collecting hubcaps that had fallen from cars. They were dirty, ugly things, but Estrada saw potential, and thought he might someday paint them and give them new life.

He began painting on canvas in 1985 when he worked as a criminal defense attorney and found it a calming therapy.

Estrada is no stranger to work. He had been working since he was 10 years old and retirement was a difficult transition. Before he retired, he often worked 12-hour days.

One day as his wife, Suzanne was cleaning, she found some acrylic paints that were left over. Estrada first used them to paint some birds that were meant as yard ornaments. They were perched on long sticks so they could be pushed into the ground, but they were in need of some color. The birds are now a merry group sitting on the hearth.

Next came the hubcaps. Estrada cleaned them and bought more acrylic paints and began the transformation. He spends about 10 hours on each one, sometimes painting for only 30 minutes at a time.

All but one of the hubcaps Estrada has picked up are plastic. He claims the one metal hubcap he has found is too gorgeous in its own right to paint.

Each hubcap is different, though those belonging to the same make of car are similar or identical depending on the model of car. “Toyota has been very good to me,” Estrada says when describing some of his finds.

Estrada doesn’t know how long he will continue his hubcap beautification, but he says he probably has at least 15 awaiting his touch and his wife has recently found him another, so it is likely he will continue for some time.

Judging from the zen of his hubcap painting, Hector Estrada has found his art

After years in the legal profession, Hector Estrada turned to a more zen occupation in his retirement, rescuing abandoned hubcaps and turning …

Volunteers turn love of sewing into help for kids

About 140 volunteers gathered in a room at the Tucson Women’s Club on July 21, to help children who are being removed from their homes.

Like a phoenix rising from ashes, Hector Estrada gives these once-ugly hubcaps that were left behind a new life as art.

The center of this hubcap has a moon and star design with the silvery color of the hubcap showing through in a star around the center. 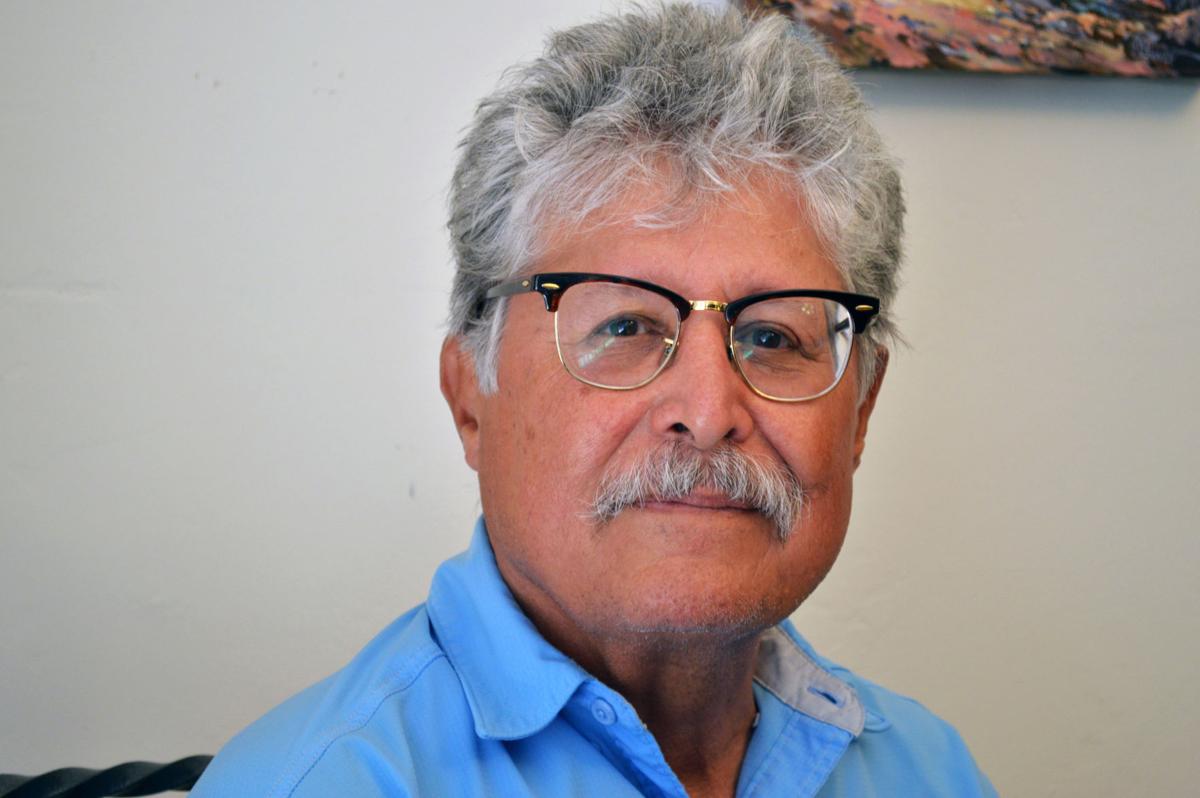