Miguel dreams of becoming a famous musician in “Coco.” In Tucson on Sunday, congratulations poured in to Roni Capin Rivera-Ashford, who worked on a “Coco” book with her son. 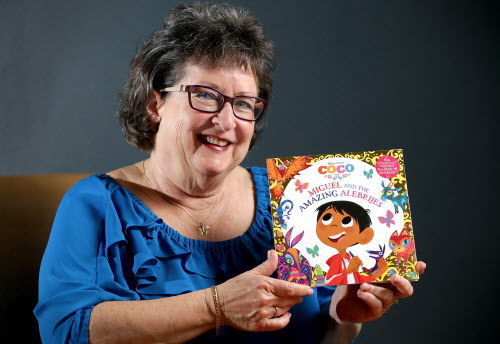 Roni Capin Rivera-Ashford was contacted by Disney to write an adventure book to pair with the movie. She and her son collaborated on the result — “Miguel and the Amazing Alebrijes.”

Sitting in the living room at her Southwest-side home in Tucson watching Sunday’s Oscars, Roni Capin Rivera-Ashford took in the news that “Coco” won for best animated feature and best original song.

She and her husband, Daniel, watched the television screen together in amazement.

Then the texts and messages full of excitement and congratulations from relatives and friends began pouring in, said Capin Rivera-Ashford, a retired educator and award-winning bilingual children’s book author. She translated the read-along with CD for “Coco” into Spanish.

Capin Rivera-Ashford collaborated on the “Coco” book with her son, Aarón Rivera-Ashford of Los Angeles. He was given the script and had to reduce it from 120 pages to 32 pages, using as much dialogue as possible.

“Coco” is a film about 12-year-old Miguel Rivera, a Mexican boy who dreams of becoming an accomplished musician and his adventures into the Land of the Dead on Día de los Muertos. He is on a mission to discover the history of his family and why he is forbidden — like generations before him — to stay away from music.

Capin Rivera-Ashford and her son also worked on her latest book, “Miguel and the Amazing Alebrijes,” which is a related adventure book for “Coco.”

Now, Capin Rivera-Ashford and her husband, also a retired educator, co-authored a second “Coco”-related adventure book that is nearly complete.

“It is about Dante — the dog in “Coco” — from when he was a puppy,” she said. “Dante arrives in the town of Santa Cecilia in Oaxaca and grows up and meets Miguel,” said the author, explaining that the 24-page book needs to now be colorfully illustrated in Disney style.

Since the Oscar news about “Coco,” Capin Rivera-Ashford said, “I feel as though I am floating in the clouds. I am very excited. I think this is a beautiful, long awaited, needed honor to not only the genre of film but for the people it is representing and bringing together.”

“It is just wonderful. The film is uniting cultures and people of all colors and all languages all over the world. It is just like it was expressed at the Oscars by the film’s director Lee Unkrich that this is a time of inclusion,” said Capin Rivera-Ashford.

Reporter Carmen Duarte can be reached at cduarte@tucson.com

Luis Carrasco: Where are all the Latinos in movies?

Hispanics make up about 18 percent of the population, yet between 2007 and 2016 only 3 percent of all speaking roles in major U.S. films went to Hispanic actors.

Miguel dreams of becoming a famous musician in “Coco.” In Tucson on Sunday, congratulations poured in to Roni Capin Rivera-Ashford, who worked on a “Coco” book with her son.

Roni Capin Rivera-Ashford was contacted by Disney to write an adventure book to pair with the movie. She and her son collaborated on the result — “Miguel and the Amazing Alebrijes.”