James Hansen wishes he was wrong. He wasn't.

NASA's top climate scientist in 1988, Hansen warned the world on a record hot June day 30 years ago that global warming was here and worsening. In a scientific study that came out a couple months later, he even forecast how warm it would get, depending on emissions of heat-trapping gases.

The hotter world that Hansen envisioned in 1988 has pretty much come true so far, more or less. Three decades later, most climate scientists interviewed rave about the accuracy of Hansen's predictions given the technology of the time.

"I don't want to be right in that sense," Hansen told The Associated Press, in an interview is his New York penthouse apartment. That's because being right means the world is warming at an unprecedented pace and ice sheets in Antarctica and Greenland are melting.

Hansen said what he really wishes happened is "that the warning be heeded and actions be taken."

They weren't. Hansen, now 77, regrets not being "able to make this story clear enough for the public."

Global warming was not what Hansen set out to study when he joined NASA in 1972. The Iowa native studied Venus — a planet with a runaway greenhouse-effect run — when he got interested in Earth's ozone hole. As he created computer simulations, he realized that "this planet was more interesting than Venus." And more important.

In his 1988 study, Hansen and colleagues used three different scenarios for emissions of heat-trapping gases — high, low and medium. Hansen and other scientists concentrated on the middle scenario.

Hansen projected that by 2017, that the globe's five-year average temperature would be about 1.85 degrees (1.03 degree Celsius) higher than the 1950 to 1980 NASA-calculated average. NASA's five-year average global temperature ending in 2017 was 1.48 degrees above the 30-year average. (He did not take into account that the sun would be cooling a tad, which would reduce warming nearly two tenths of a degree Fahrenheit, said the Scripps Institution of Oceanography's Jeff Severinghaus.)

Hansen also predicted a certain number of days of extreme weather — temperature above 95 degrees, freezing days and nights when the temperatures that don't drop below 75 — per year for four U.S. cities in the decade of the 2010s.

Hansen's forecast generally underestimated this decade's warming in Washington, overestimated it in Omaha, was about right in New York and mixed in Memphis.

Clara Deser, climate analysis chief at the National Center for Atmospheric Research, said Hansen's global temperature forecast was "incredible" and his extremes for the cities were "astounding" in their accuracy. Berkeley Earth's Zeke Hausfather gives Hansen's predictions a 7 or 8 for accuracy, out of 10; he said Hansen calculated that the climate would respond a bit more to carbon dioxide than scientists now think.

University of Alabama Huntsville's John Christy, a favorite of those who downplay climate change, disagreed. Using mathematical formulas to examine Hansen's projections, he concluded: "Hansen's predictions were wrong as demonstrated by hypothesis testing."

Hansen had testified before Congress on climate change at a fall 1987 hearing that didn't get much attention — likely because it was a cool day, he figured.

So the next hearing was scheduled for the next summer, and the weather added heat to Hansen's words. At 2 p.m., the temperature hit a record high 98 degrees and felt like 102.

It was then and there that Hansen went out on a limb and proclaimed that global warming was already here. Until then most scientists merely warned of future warming.

He left NASA in 2013, devoting more time to what he calls his "anti-government job" of advocacy.

Hansen, still at Columbia University, has been arrested five times for environmental protests. Each time, he hoped to go to trial "to draw attention to the issues" but the cases were dropped. He writes about saving the planet for his grandchildren, including one who is suing the federal government over global warming inaction. His advocacy has been criticized by scientific colleagues, but he makes no apologies.

"If scientists are not allowed to talk about the policy implications of the science, who is going to do that? People with financial interests?" Hansen asked.

The Associated Press Health & Science Department receives support from the Howard Hughes Medical Institute's Department of Science Education. The AP is solely responsible for all content.

30 years ago, the first scientist spotted 'global warming.' But climate isn’t the only thing changing now

It’s been 30 years since much of the world learned that global warming had arrived, but climate isn’t the only thing that’s changing: Nature itself is too. 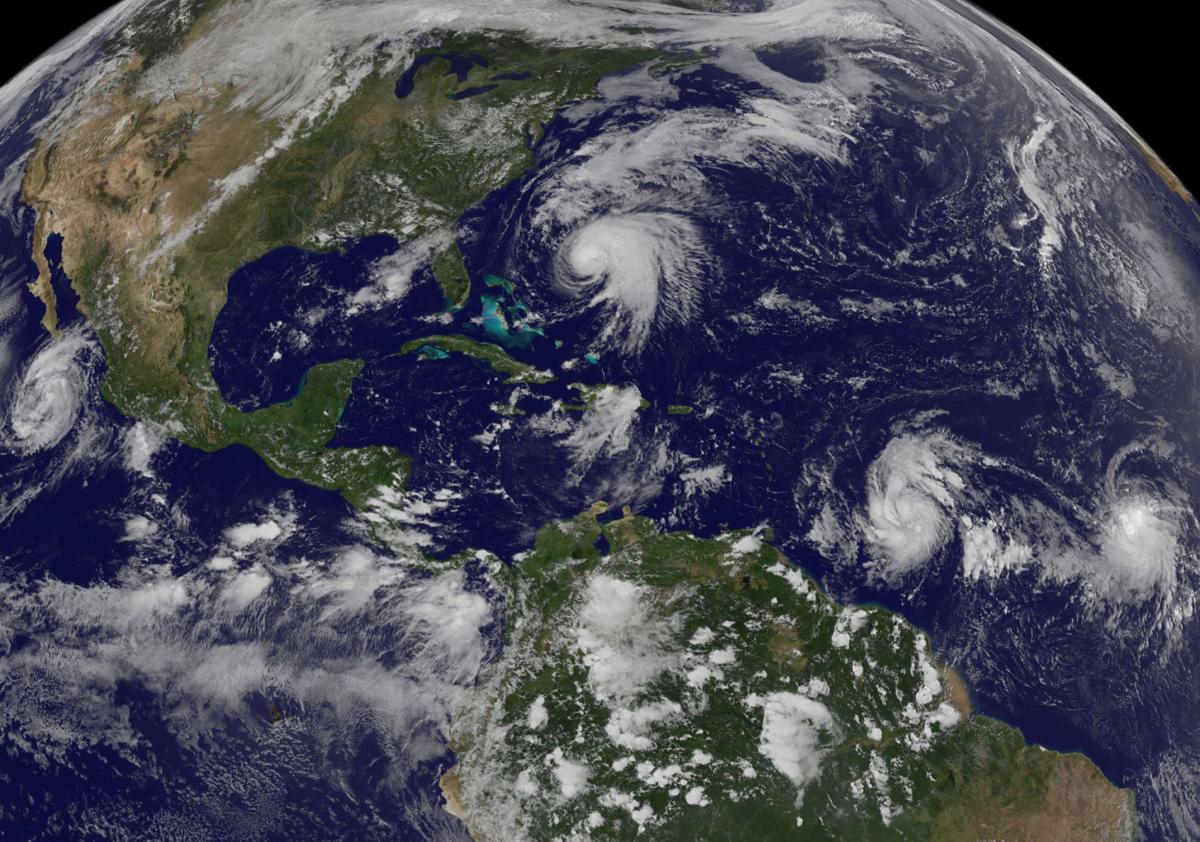 This image made available by the NOAA-NASA GOES Project shows tropical weather systems Hurricane Norma, left, on the Pacific Ocean side of Mexico; Jose, center, east of Florida; Tropical Depression 15, second from right, north of South America, and Tropical Storm Lee, right, north of eastern Brazil, on Saturday, Sept. 16, 2017. During the past 30 years since 1988, there have been more major hurricanes _ those with winds of more than 110 mph _ on average, they’ve lasted longer and produced more energy than the previous 30 years, according to an Associated Press analysis of storm data. (NOAA-NASA GOES Project via AP) 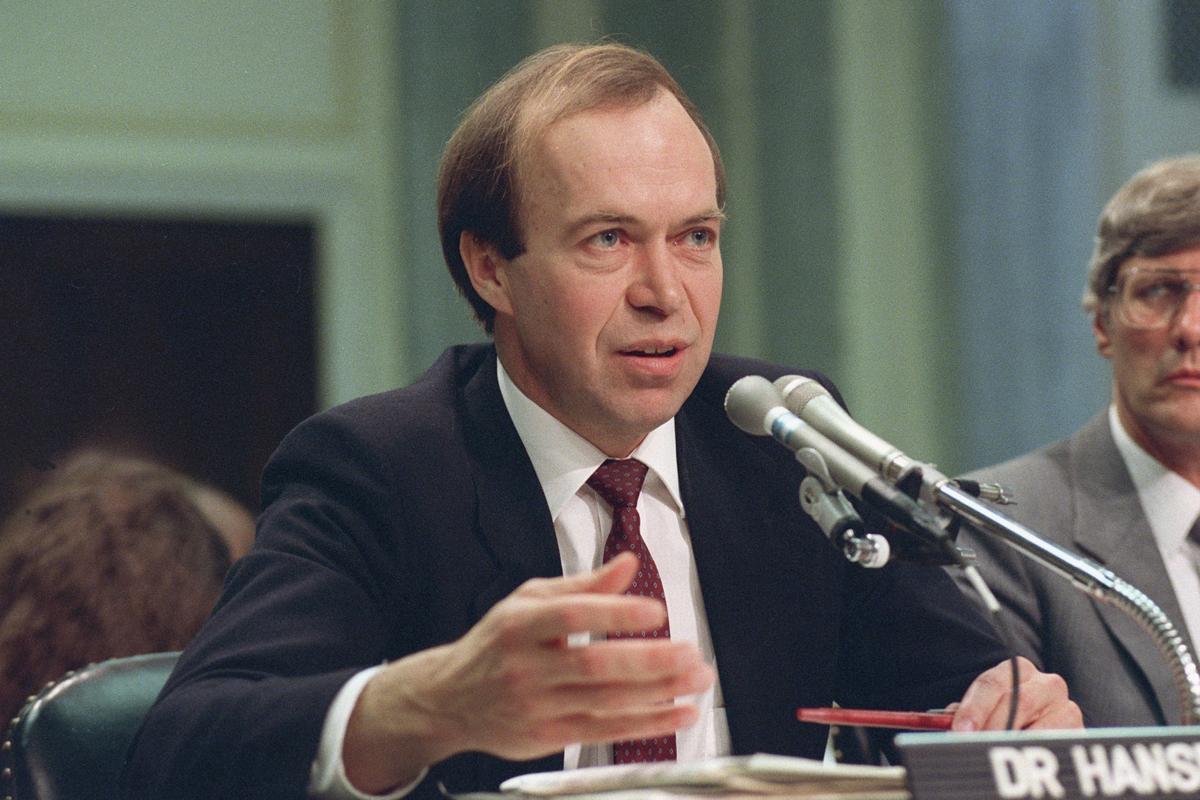 In this Monday, May 9, 1989 file photo, Dr. James Hansen, director of NASA's Goddard Institute for Space Studies in New York, testifies before a Senate Transportation subcommittee on Capitol Hill in Washington, D.C., a year after his history-making testimony telling the world that global warming was here and would get worse. (AP Photo/Dennis Cook)