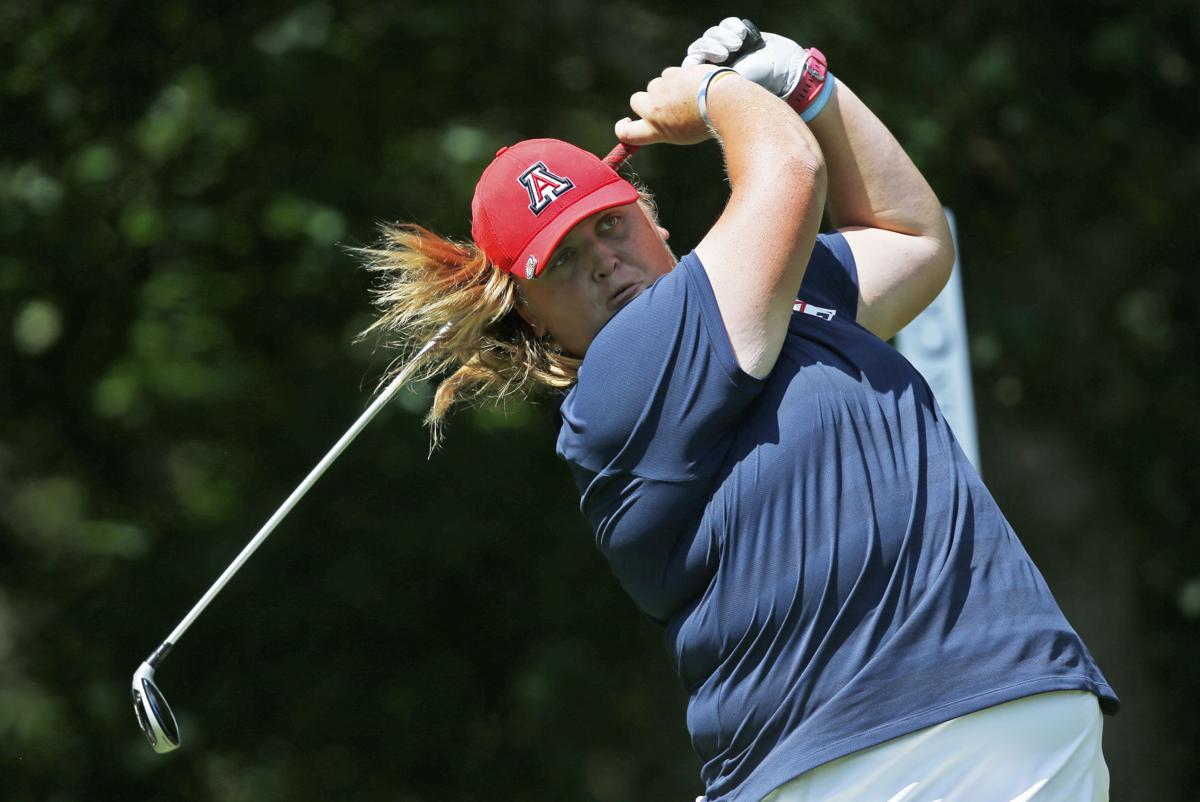 Haley Moore’s clutch putt last week helped the UA women’s golf team beat Alabama in the national championship match. Moore won all three of her matches during the final two days of the event. It was the first team title for a Wildcats squad since the baseball team won it all in 2012. 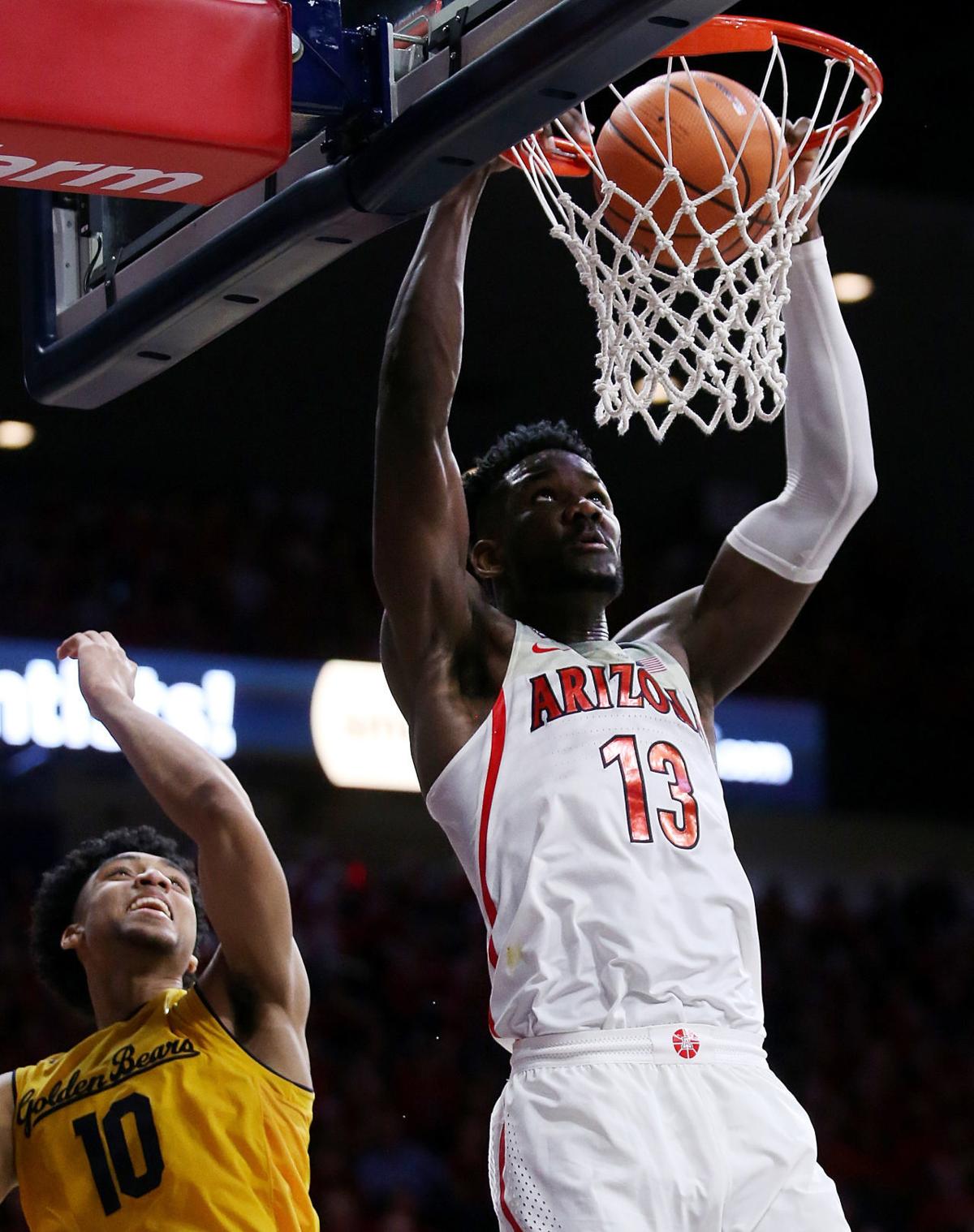 After a dominating season with the Wildcats, Deandre Ayton could be the No. 1 pick in the upcoming NBA draft. 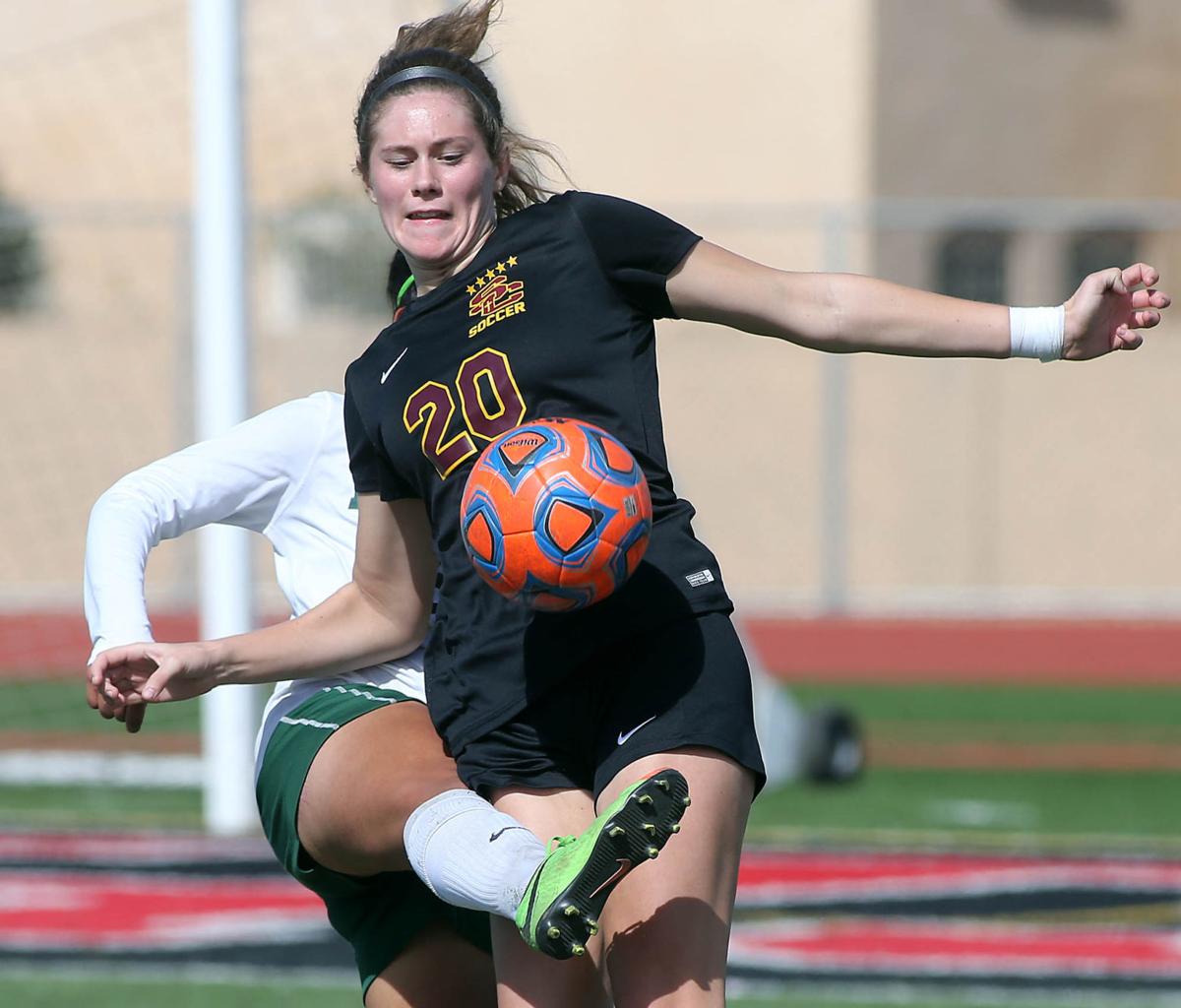 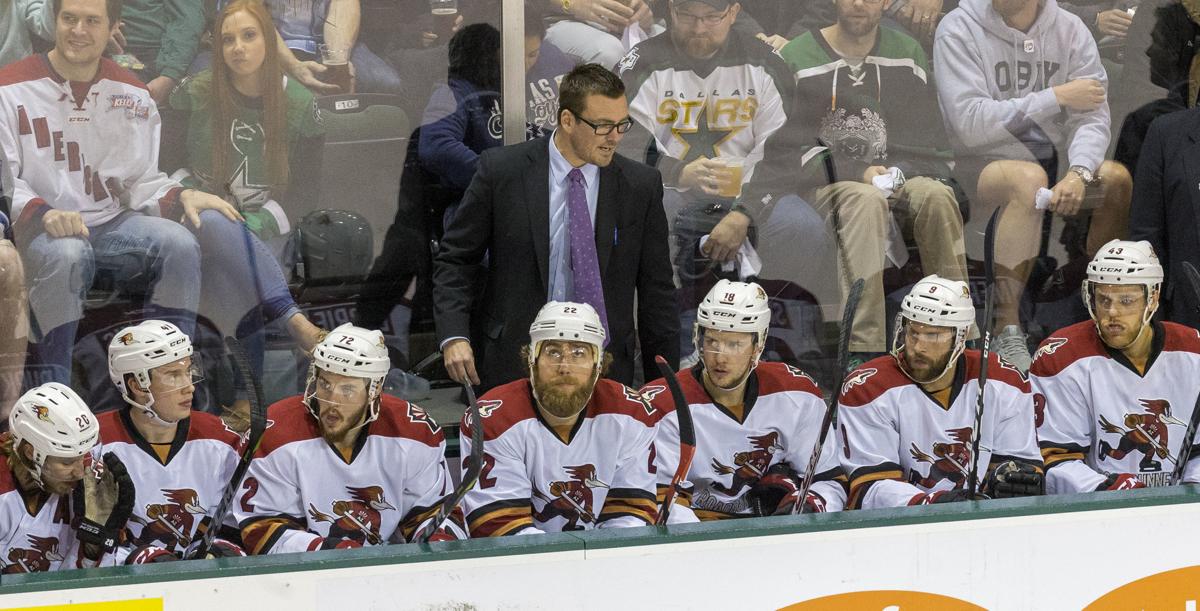 Tucson head coach Mike Van Ryn speaks to his team during Game 5 of the second round in the Calder Cup playoffs in Cedar Park, Texas, Friday, May 11, 2018. (Stephen Spillman / for Arizona Daily Star) 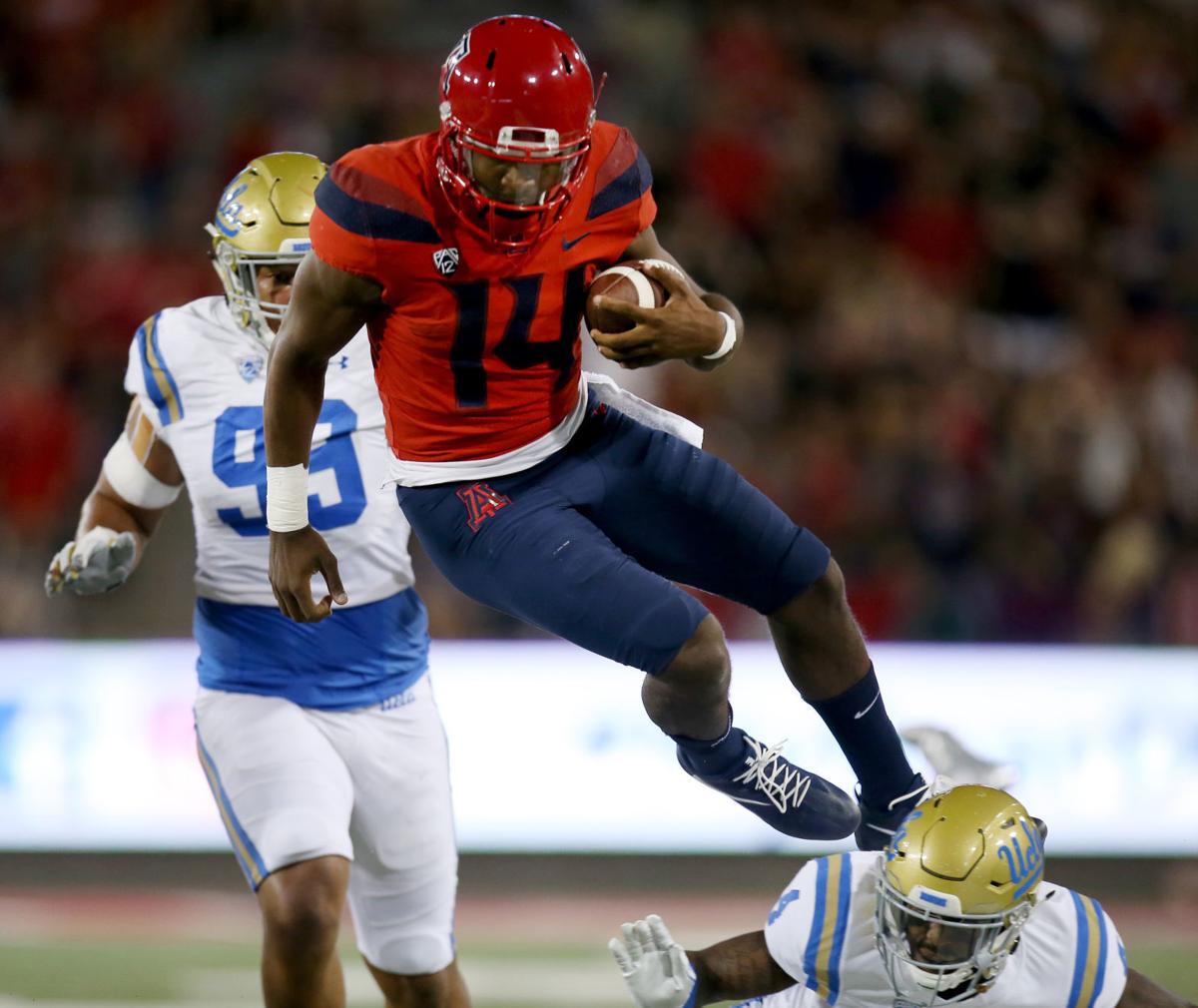 Khalil Tate hit UCLA in the mouth at home last year, leading the Wildcats to a 17-point win. 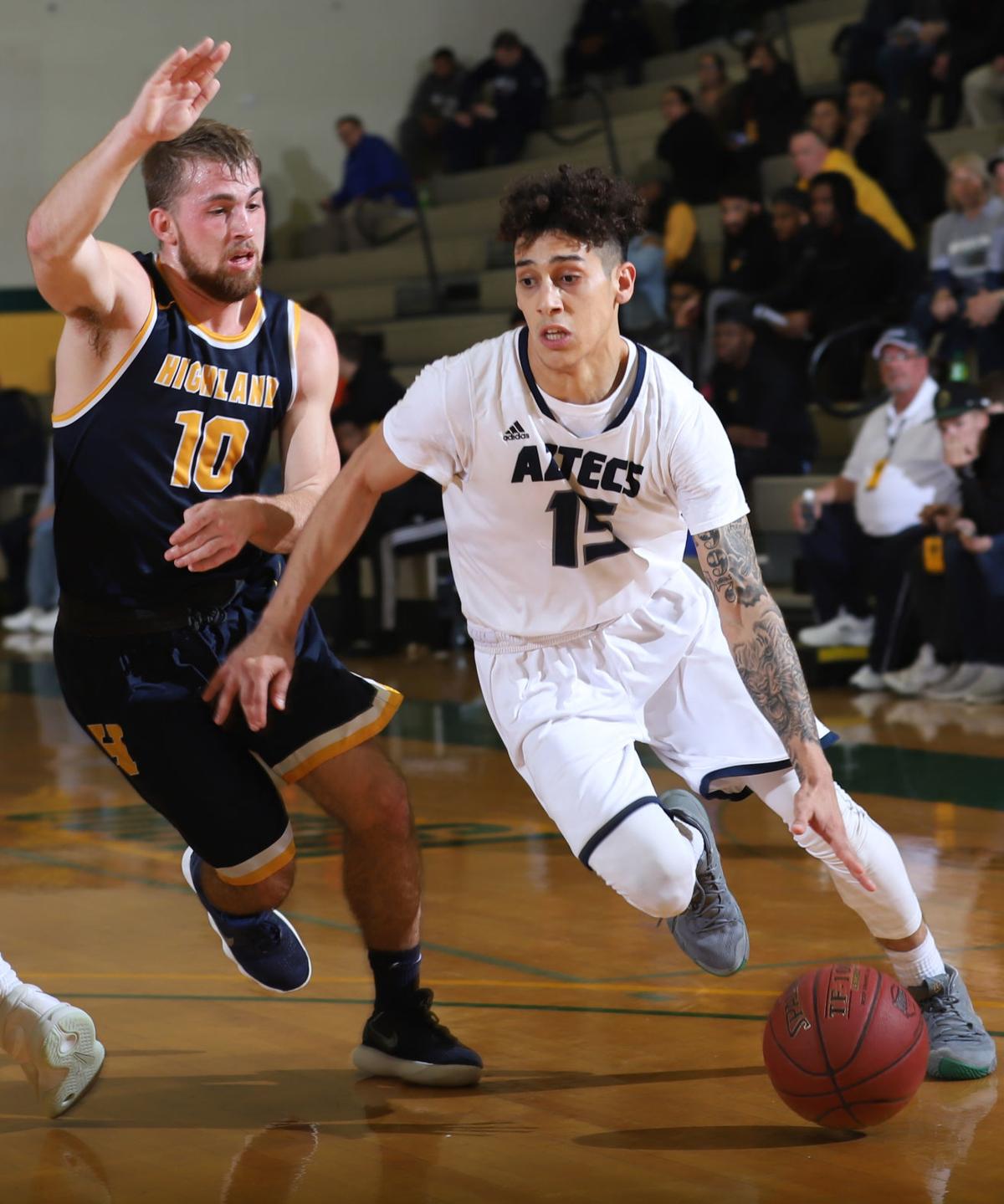 A few moments after Arizona was denied entry into the 2018 NCAA baseball tournament Monday, my phone pinged. Here is the tweet from a colleague:

“… and the UA sports year that we never thought would end, ends.”

Athlete of the year: Bianca Pagdanganan, UA women’s golf. She might’ve topped this list by finishing No. 2 in the NCAA individual championships. But the junior transfer from Gonzaga went far beyond that.

Her 30-foot eagle putt at the 72nd and final hole of the NCAA championships dramatically put Arizona into a tie for the final spot in the “Elite Eight”. Pagdanganan then won a quarterfinals match against the nation’s No. 5 golfer, UCLA’s Patty Tavatanakit. Later that day, Pagdanganan beat Stanford’s Andrea Lee, ranked No. 1 in the Pac-12 and No. 4 in the nation.

Runner-up: Roman Bravo-Young, Sunnyside wrestling. He was ranked No. 1 in the nation, finished his prep career 182-0, and led the Blue Devils to the state championship. Can’t beat it.

Team of the year: Pima College’s men’s basketball team. The Aztecs went 31-5 and finished second in the NJCAA Division II finals, the best season in school history. And they didn’t just grind it out; Brian Peabody’s team averaged a nation-leading 102 points per game.

The Lancers were so good in the clutch that they won their four state tournament games by a combined score of 22-0.

Coach of the year: In his first season as coach of the Tucson Roadrunners, Mike Van Ryn produced a 40-20-6 record, which was the highest winning percentage in the wickedly difficult American Hockey League Western Conference, putting the second-year Roadrunners franchise on the map.

Runner-up: Andy Fetsis, Pusch Ridge Christian High. Try to keep this straight: Fetsis coached the Pusch Ridge boys and girls tennis teams to state championships, with a combined 33-3 record. There’s much more: Pusch Ridge also swept the boys and girls singles and doubles championships, and to make it more rewarding, his son, Christian Fetsis, won the state doubles title, and his daughter, Sofia Fetsis, won the state singles title. And there’s this: In the fall, Fetsis was the defensive coordinator for Pusch Ridge’s football team, 13-1, that reached the state championship game.

Game of the year: New Mexico State had not played in a bowl game for 57 years, but when it was invited to the second Nova Home Loans Arizona Bowl on Dec. 29, the exodus west across Interstate 10 to Tucson was unprecedented. Attendance: 39,132. It was a festive atmosphere like few others in the bowl season, and NMSU added a fairy-tale touch by scoring in overtime to beat Utah State 26-20, which prompted an impromptu field-rushing scene and a flood of happy tears.

Runner-up: One of the true nice guys in pro sports, Steve Stricker, arrived at the 18th tee at Tucson National with a one-stroke lead over Jerry Kelly in the Champions Tour’s Cologuard Classic. It was electric. The grandstands and fairway around the 18th green were full to overflowing as Stricker made a clutch par to win his first-ever Champions Tour event. As the Conquistadores’ helmet was placed on Stricker’s head, he broke down and wept. It was a moment to remember.

Performance of the year: In the final two games of the Pac-12 men’s basketball tournament, Arizona center Deandre Ayton crushed UCLA and USC by scoring 64 points and grabbing 32 rebounds. In a century of basketball at Arizona, it might’ve been the most dominating weekend by any Wildcat.

Runner-up: Arizona freshman Jordan Geist won Pac-12 championships in the shot put and discus, becoming just the fourth man in the last 35 years to do so. He enters next week’s NCAA championships with the top throw, 70 feet, 4½ inches, in the nation.

Performance of the month: Arizona sophomore quarterback Khalil Tate became Mr. October when he was finally unleashed and given a chance to play. In four victories over Colorado, Washington State, UCLA and Cal, Tate rushed for 840 yards, scored eight touchdowns and became the first Pac-12 football player ever to win four consecutive offensive player of the week awards. He also completed 71 percent of his passes for 743 yards. Need convincing? Tate’s touchdown runs were from 76, 75, 71, 58, 49, 47, 45 and 28 yards. Not a cheapie in the bunch.

Runner-up: Pima College’s men’s soccer team went 8-0-2 in September, climbing to No. 7 in the NJCAA poll as All-Americans Julian Gaona and Chris Cooper combined to score 13 goals en route to the NJCAA finals, finishing third with a 19-5-3 record.

Most forgettable 52 hours of the year: No. 2 Arizona was swept by North Carolina State, SMU and Purdue in three days at the Battle 4 Atlantis in the Bahamas, setting the stage for a colossally unfulfilling basketball season.

No. 1 sports figure of 2017-18: Haley Moore, UA women’s golf. Yes, she won two individual championships along the way. Yes, Moore was No. 3 in the Pac-12 finals. And, yes, in upsets of Stanford, UCLA and Alabama at the NCAA championships, Moore was the only golfer who was undefeated, 3-0, taking down formidable opponents from the Bruins, Crimson Tide and Cardinal.

But mostly, Moore is No. 1 because in the moment of a golfer’s lifetime — with the national championship at stake — she was up to it. Moore made a 5-foot putt that will live for posterity in UA sports history.

NBA Finals: A timeline of former Arizona Wildcats playing for a ring

Every former Wildcat who has made the NBA Finals since 1995.

The Cats are among the ‘first four out,’ missing the postseason for the first time in Jay Johnson’s tenure.

The case for – and against – the Arizona Wildcats, who sit squarely on the NCAA Tournament bubble

The UA is seeking its third straight tournament berth and will learn its fate Monday morning.

Program will be in place when temperature goes over 102.

“It is really up to Kim Jong Un,” McSally said. "It is a matter whether he is going to keep playing games while his people suffer."

Survey says 52 percent in favor, with 40 percent against.

Tucson weather: Bring on the heat

Temperatures this weekend could reach 106 degrees or higher.

The Loop gives man a reason to move to Tucson

Dennis Miller is making the move from Los Angeles to Tucson.

Arizona law: Schools with 'D' or 'F' must inform neighborhoods

Thousands without power due to outages on southwest side

More than 5,000 Tucsonans were without power on the southwest side Tuesday afternoon, according to the Tucson Electric Power website.

Report: Arizona man gets 3 days in jail for YouTube stunt at a Disney resort

ORLANDO, Fla. — An Arizona man has been sentenced to three days in jail after deputies say he falsely told guests at a Walt Disney World resor…

The Red Wolves will play a team from the Mountain West Conference.

Haley Moore’s clutch putt last week helped the UA women’s golf team beat Alabama in the national championship match. Moore won all three of her matches during the final two days of the event. It was the first team title for a Wildcats squad since the baseball team won it all in 2012.

After a dominating season with the Wildcats, Deandre Ayton could be the No. 1 pick in the upcoming NBA draft.

Tucson head coach Mike Van Ryn speaks to his team during Game 5 of the second round in the Calder Cup playoffs in Cedar Park, Texas, Friday, May 11, 2018. (Stephen Spillman / for Arizona Daily Star)

Khalil Tate hit UCLA in the mouth at home last year, leading the Wildcats to a 17-point win.