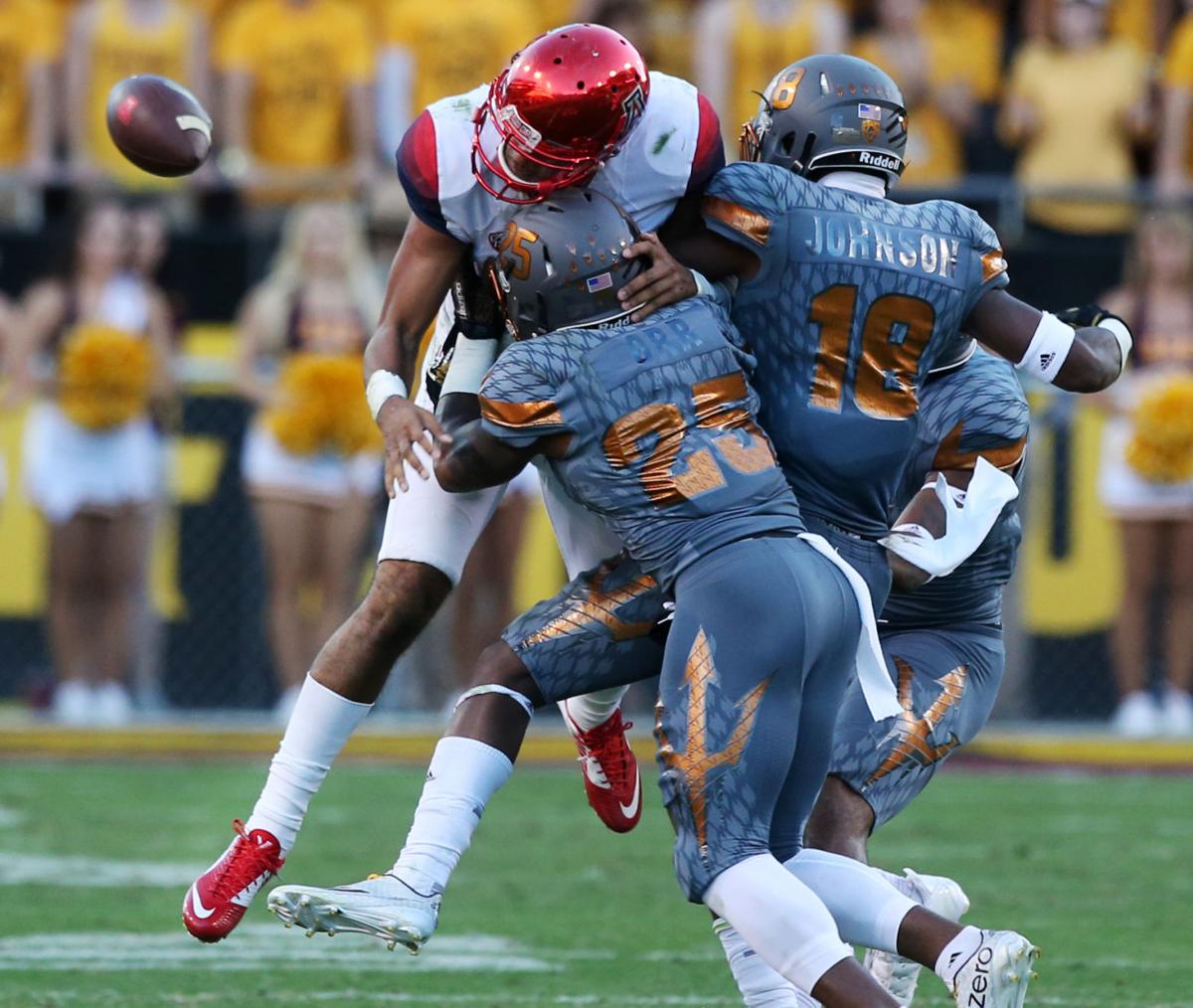 Arizona quarterback Brandon Dawkins fumbles after being hit by Arizona State’s Kareem Orr and James Johnson during the fourth quarter. 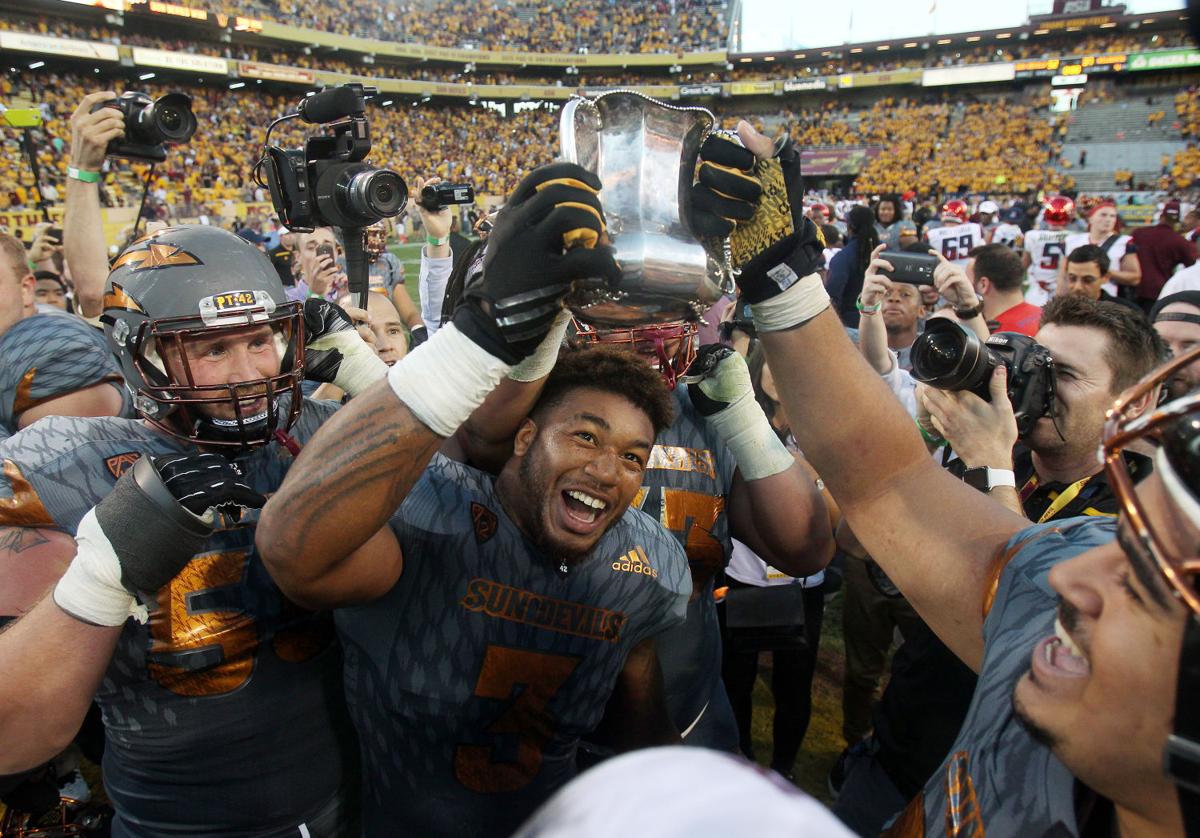 Arizona State players celebrate their win over the Wildcats by holding up the Territorial Cup at Sun Devil Stadium. ASU gained 400 yards in the first half, but then gave up 27 second-half points before sealing the game with two late interceptions. 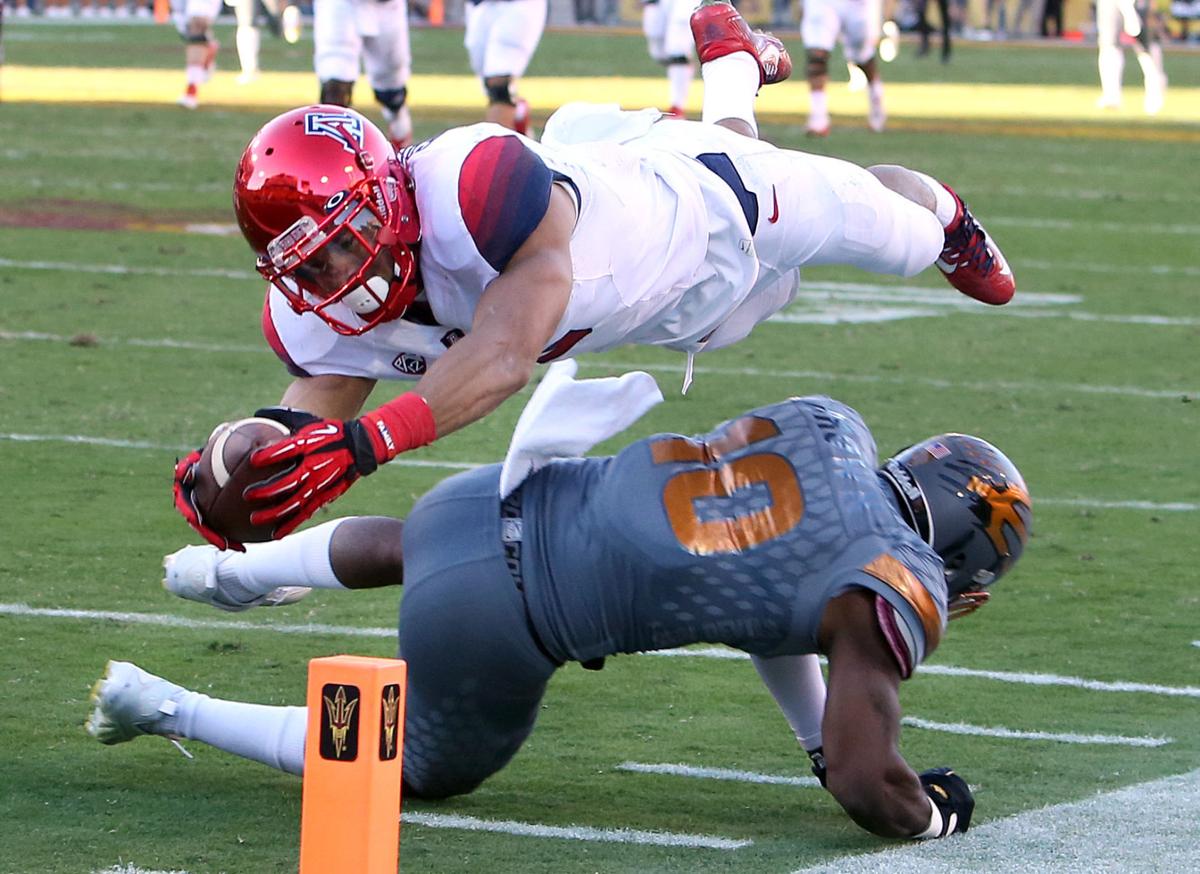 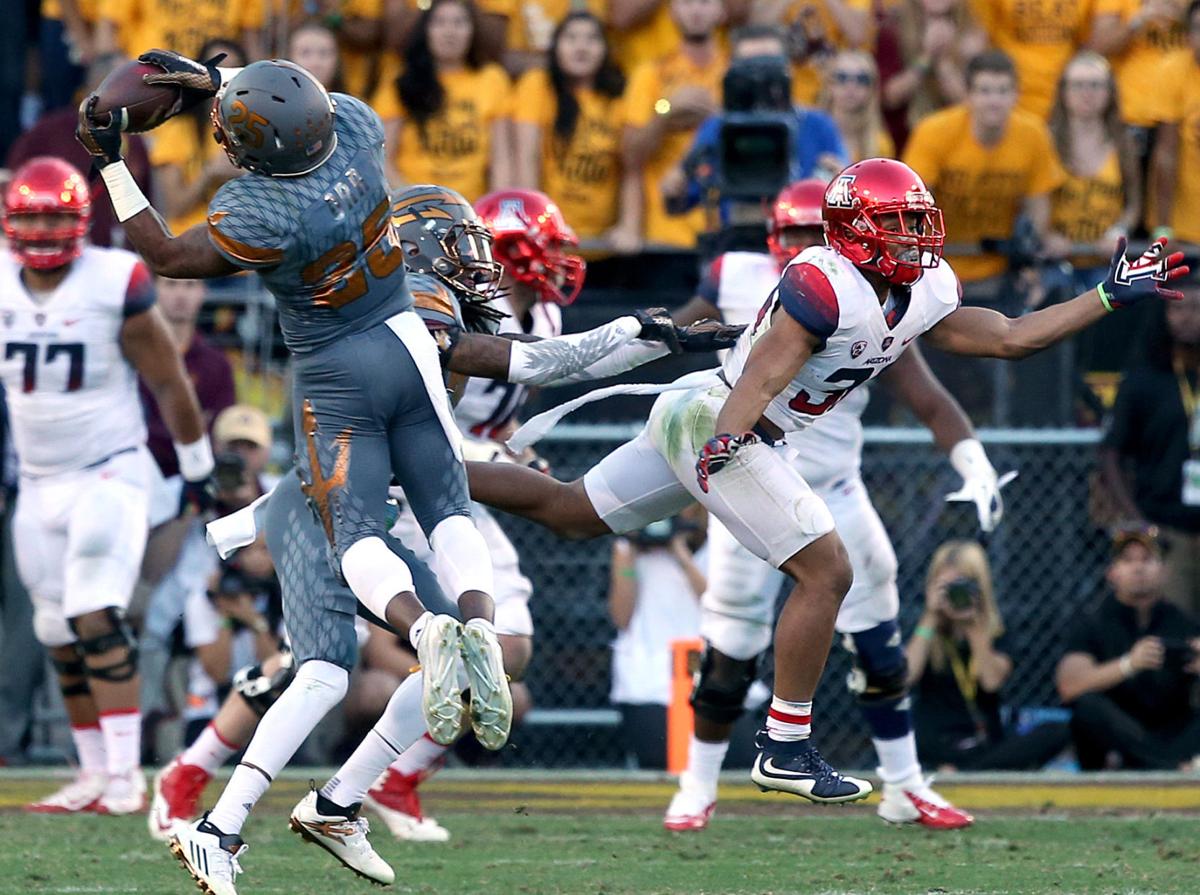 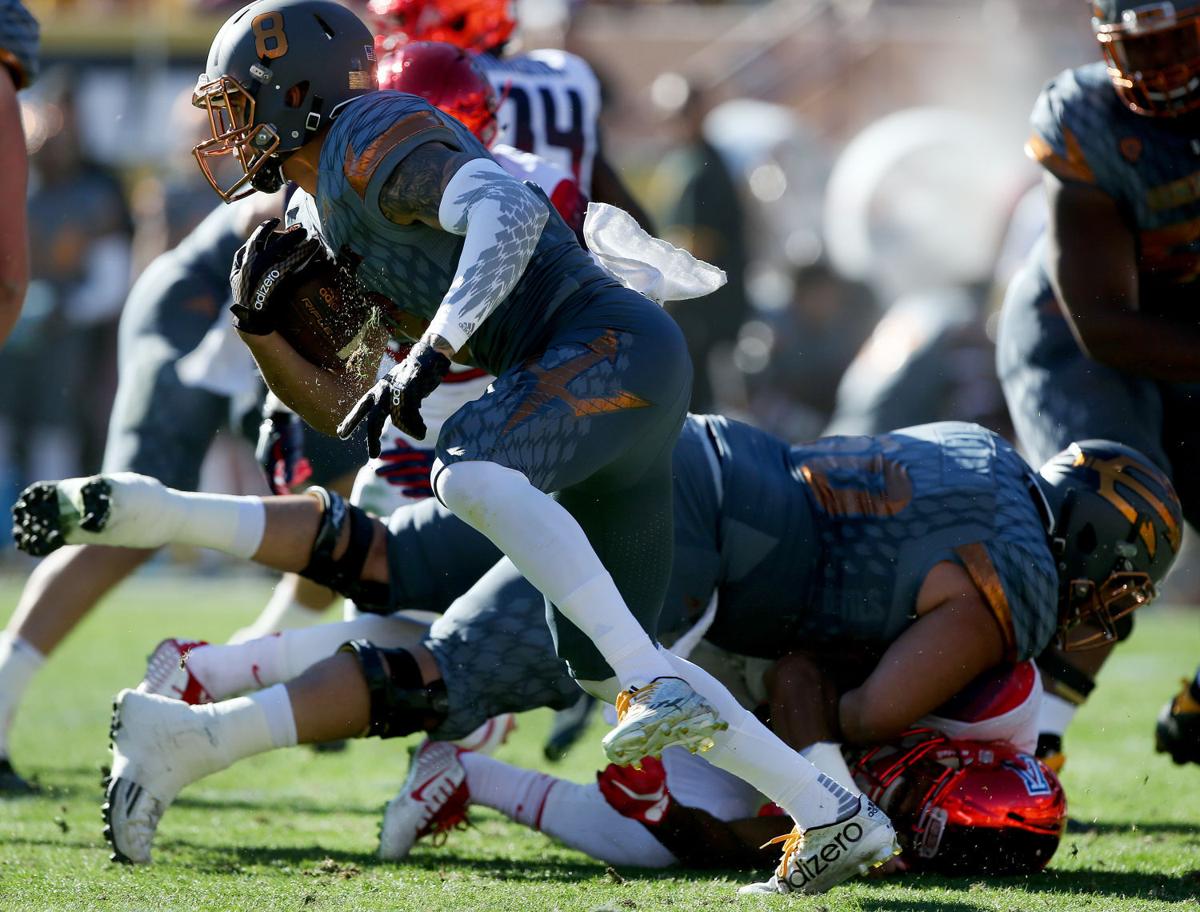 TEMPE — Brandon Dawkins trotted onto the Sun Devil Stadium turf with 4 minutes remaining in Saturday’s Territorial Cup game, his job as simple as it was daunting.

Step 1: Drive the Arizona Wildcats 94 yards for a touchdown.

Arizona’s redshirt freshman quarterback rushed for 4 yards on first down and threw an incomplete pass on second down. The game hung in the balance when Dawkins clapped his hands emphatically on third down, and the ball was snapped.

Freeze the defining play of Arizona’s 52-37 loss to Arizona State, and you’d see the Wildcats’ football stars on the sideline, injured. Quarterback Anu Solomon did not play because of a concussion suffered a week ago. His backup, Jerrard Randall, was benched after 1½ inconsistent quarters. Linebacker Scooby Wright was a spectator — again — because of a foot injury. So, too, were fellow linebackers Derrick Turituri and Jake Matthews. Guard Freddie Tagaloa was in street clothes. Wide receiver Samajie Grant was out with a head injury. Running back Nick Wilson wasn’t himself, still recovering from a knee injury.

Yet, thanks to Dawkins, the Wildcats were in the thick of a game that — given the circumstances — they had no business winning.

“He gave us a chance,” UA coach Rich Rodriguez said.

And then the Wildcats’ chances ran out.

Kareem Orr intercepted Dawkins and returned it 21 yards for a score, extending Arizona State’s lead to 45-30, Another pick-six 1 minute 3 seconds later, this time by Lloyd Carrington, secured the Territorial Cup for ASU. The Sun Devils (6-5, 4-4 Pac-12) found something to celebrate near the end of a disappointing season. The Wildcats (6-6, 3-6) traveled back to Tucson bruised, yes, but not broken.

Following the game, Rodriguez marveled — again — at the Wildcats’ terrible luck. It began with news that the team would have no bye week, got worse when Wright went down and intensified when Solomon and other key players were unavailable for the biggest game of the year.

“The reality is, it’s been a challenge since Week 1,” he said. “It’s one of those years when you have bad luck. I told the team in the locker room that, if nothing else, they had a bit of …”

Rodriguez’s voice trailed off as he searched for the right words. The fiery coach was overwhelmed by his emotions.

“Competitiveness. Heart,” he finished. “The guys showed something today.”

It started with Dawkins, a third-stringer who was forced into action following Solomon’s injury and Randall’s inconsistency.

Dawkins, battling the stomach flu, wrote his name into UA lore. He completed 16 of 30 passes for 305 yards and two touchdowns and ran 21 times for 78 yards and touchdown. But the two turnovers-for-touchdowns were too much to stand, especially after Arizona battled from deficits of 14-0 and 31-10.

“Not the result we wanted,” Dawkins said.

ASU quarterback Mike Bercovici struggled after posting one of the best halves of his career. Bercovici threw for 231 yards and two scores and running back Kalen Ballage rushed for 98 yards in the first half alone. The Devils gained 400 first-half yards.

ASU receiver Devin Lucien caught a 58-yard pass and scored a 59-yard touchdown in the first quarter alone. Lucien caught nine passes for 190 yards and a score, and was named the Bob Moran Most Valuable Player.

The game was a defensive struggle until Bercovici found Lucien streaking down the field with 5 minutes remaining in the quarter. One play later, Demario Richard cut through a half-dozen UA tacklers for the game’s first score.

“A couple big plays killed us the whole game, particularly in the first half,” Rodriguez said.

The Wildcats spent the rest of the game catching up. The team’s maligned — and injured — defense stiffened up, holding the Sun Devils scoreless in the third quarter. The offense managed 27 second-half points against an ASU defense that’s widely viewed as the team’s strength.

But when it came time to make a play — to drive, score and hit the two-point conversion — the Wildcats were not healthy enough, experienced or effective enough to pull it off.

ASU will finish its season next week at Cal, while the Wildcats are idle. The UA has qualified for a bowl game, though their destination and opponent won’t be known for another eight days.

Saturday’s loss was a devastating end to UA regular season that gained life when the Wildcats played well in a loss to USC and then upset No. 10 Utah. The team’s .500 regular season record is “not fun,” said Rodriguez, who has been the subject of coaching rumors at Virginia Tech and Miami, among other stops.

“We’re not going to stay there.”

Find information about UA football coaches, opponents and results from every game since 1899.

Arizona quarterback Brandon Dawkins fumbles after being hit by Arizona State’s Kareem Orr and James Johnson during the fourth quarter.

Arizona State players celebrate their win over the Wildcats by holding up the Territorial Cup at Sun Devil Stadium. ASU gained 400 yards in the first half, but then gave up 27 second-half points before sealing the game with two late interceptions.