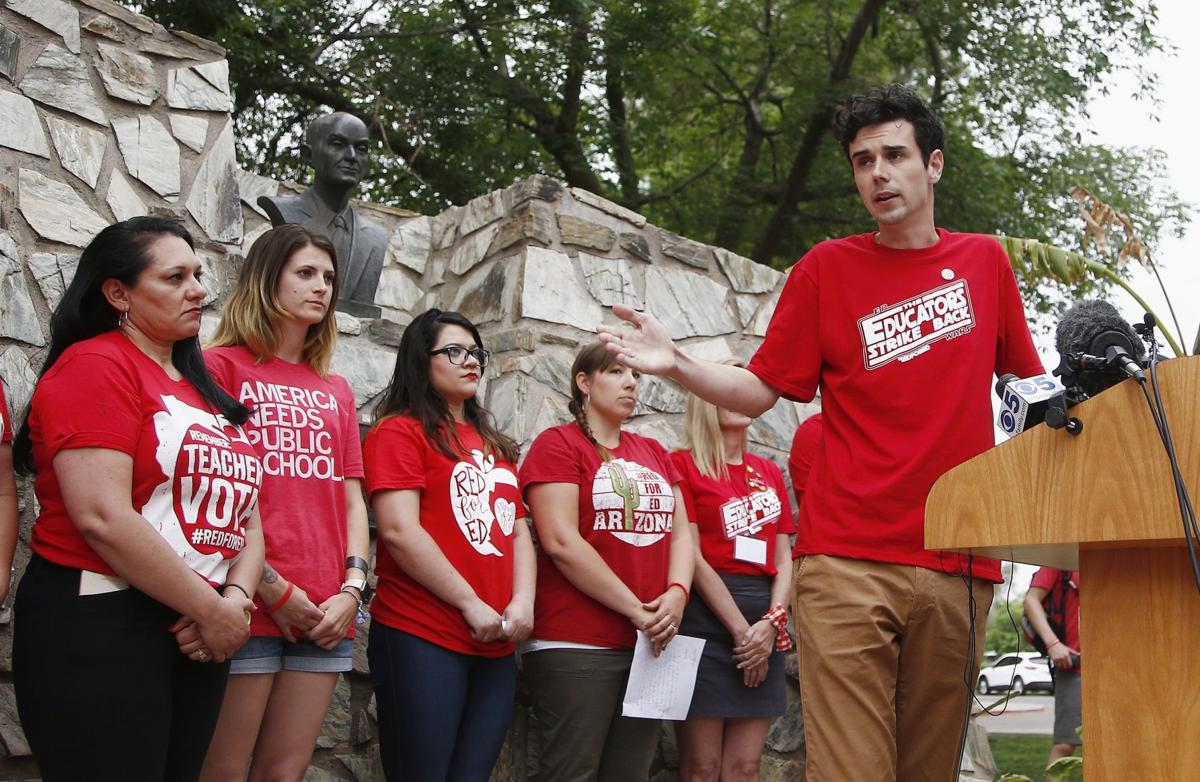 Teacher Noah Karvelis speaks during a news conference in Phoenix prior to protest organizers announcing their intention to go back to work with the passage of a state budget. 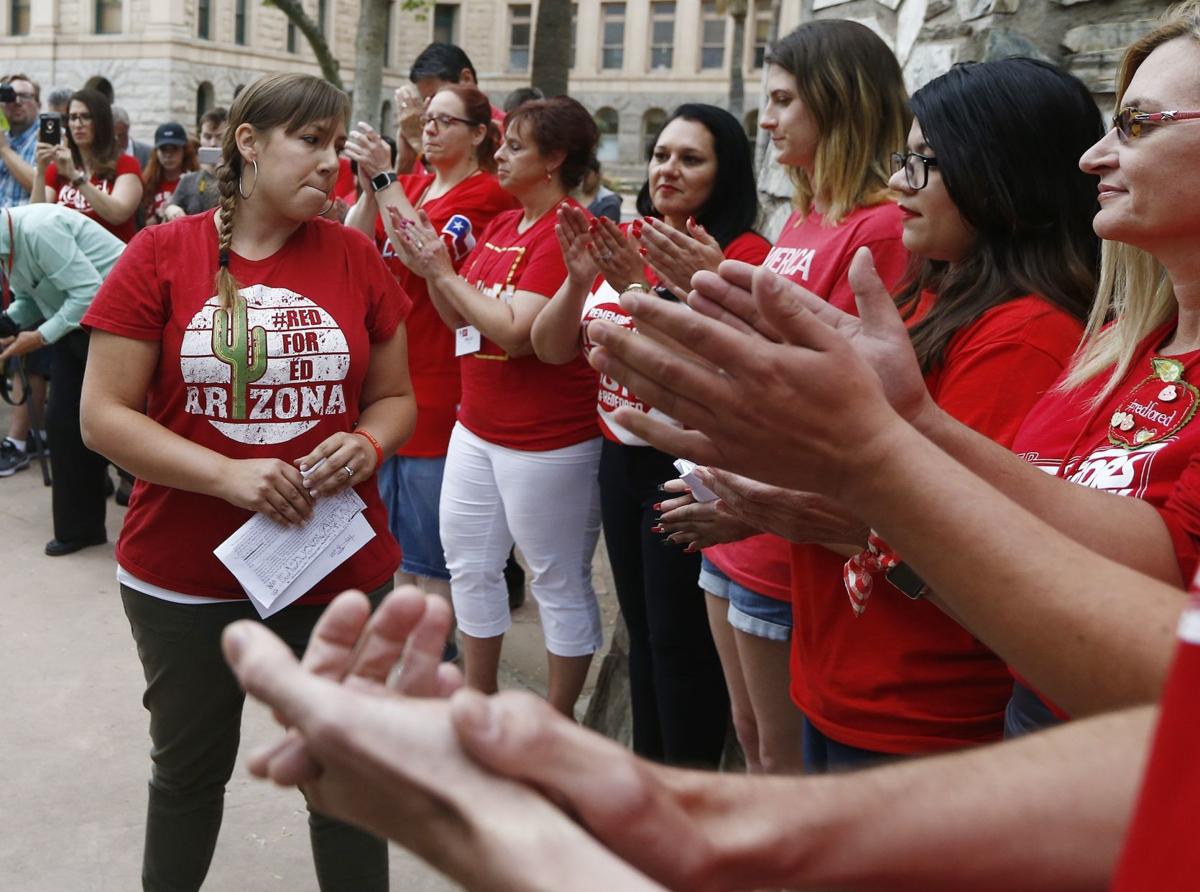 Phoenix teacher Rebecca Garelli, left, is applauded at the Arizona Capitol as she makes an announcement from protest organizers that teachers should go back to work. Organizers said teachers should return to their jobs once the new state budget is passed.

But not until Thursday. And not until lawmakers give final approval to the state budget and teacher pay plan, now scheduled for Wednesday, May 2.

He said the Republican-controlled Legislature agreed last month to extend the 0.6-cent sales tax for education beyond its 2020 expiration date. That was not something on Gov. Doug Ducey’s agenda when the legislative session started in January.

More significant, Ducey has agreed to an average 9 percent pay raise for teachers in the coming school year, with 5 percent increases each of the following two years. By contrast, the budget the governor originally presented to lawmakers included just a one-time 1 percent increase.

But he said it has now become obvious that this is the best educators will get, at least this year.

That means it’s time for teachers to return to classes — and their students —and begin work on the rest of the agenda, he said. That includes supporting a ballot initiative to raise $690 million annually through a surcharge on the state’s highest wage earners in dedicated dollars for education, money that lawmakers could not take away the next time there’s a recession.

What also may be on the table, Karvelis said, is working to change the makeup of the Legislature and perhaps the governor’s office.

“... We haven’t had a second to even catch our breath and think about that right now,” he said. “But I guarantee you there are a lot of people walking around down here (at the Capitol) in red every single day, looking at themselves in the mirror and saying, ‘If they can’t get it done, I’ll get it done.’ ‘’

For the moment, though, this is it. “One of the deciding factors is that the Legislature has gone not as far as they’re able to go, but as far as they’re willing to go,” Karvelis said. “That realization is crystal clear to everybody here who’s been in there, trying to make their voice heard.”

Most notably missing from what lawmakers are set to vote on Wednesday, from the educators’ perspective, is their demand that per-student funding be restored to 2008 levels.

In fact, legislative budget staffers acknowledged Tuesday that, even with all the money the governor says the plan will put into K-12 education, per-student funding on an inflation-adjusted basis will still be less by 2021 than it was in 2008.

That is significant because one of the key demands of the #RedForEd movement is to bring state aid back to where it was a decade ago.

More than pay is at issue. During hearings occurring Tuesday, even as the decision to go back was being announced, a parade of teachers told lawmakers about the effects of funding shortfalls, including the lack of money for basic supplies and schools in disrepair.

They also fault Ducey and Republicans for the plan not providing dollars for support staff pay raises. Ducey said the $100 million he is restoring in additional district assistance comes with sufficient flexibility for school districts to use some — or all — of that for those employees.

But that money — and a lot more — used to be given to schools automatically for things like computers, books, buses and minor repairs. Those funds were raided during the recession, with Ducey himself taking $117 million from that account his first year in office to balance the state’s books and make good on a promise of a tax cut.

Rep. David Livingston, R-Peoria, was not bothered by the finding that state aid to schools will remain below 2008 levels. He called that a “high-water mark” for education dollars, saying it does not represent historic funding.

Yet, the budget includes a tax break for retired military, exempting more of their pensions from state income taxes.

Gubernatorial press aide Daniel Scarpinato minimized the effects of the walkout. He noted that Ducey announced his teacher pay plan on April 12, a week before the vote by Arizona Educators United and the Arizona Education Association to strike.

But he conceded that the #RedForEd movement, started in early March after West Virginia teachers went on strike and got a 5 percent raise, had made a strong difference. It crystallized public support, with demonstrations and “walk-ins” at public schools featuring perhaps 100,000 teachers and parents marching to show support for more funding for education.

So radical was Ducey’s change of heart that just two days before his 9 percent announcement, Ducey had dismissed the #RedForEd movement as “political theater,” reaffirming his plan to give teachers just a 1 percent raise.

“The governor has listened,” Scarpinato said Tuesday. “He’s been impressed with the teachers.”

That pressure also also resulted in Ducey agreeing to meet with teachers —though pointedly not with either Karvelis or AEA President Joe Thomas.

Several local school districts already reopened Tuesday, or planned to reopen Wednesday. Following Arizona Educators United’s announcement Tuesday evening, others confirmed they would be reopening Thursday, while the rest had previously said they would reopen when the strike is over.

A collection of David Fitzsimmons' editorial cartoons during the historic Arizona teacher walkout.

Some say school districts are frittering away money on fat administration budgets. If true, that’s a legitimate problem. But it is not so.

Teacher Noah Karvelis speaks during a news conference in Phoenix prior to protest organizers announcing their intention to go back to work with the passage of a state budget.

Phoenix teacher Rebecca Garelli, left, is applauded at the Arizona Capitol as she makes an announcement from protest organizers that teachers should go back to work. Organizers said teachers should return to their jobs once the new state budget is passed.