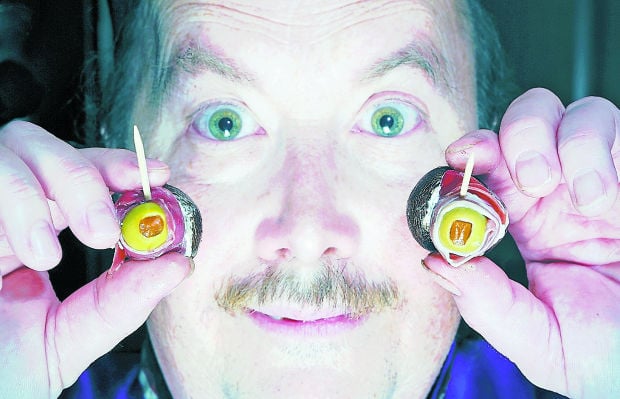 ﻿Personal chef Michael Neylan shows some of his Halloween-themed Creepy Skewered Olive Eyes at his home in Oro Valley. Seven years ago, Neylan moved here after running a fast-paced catering business in Connecticut. 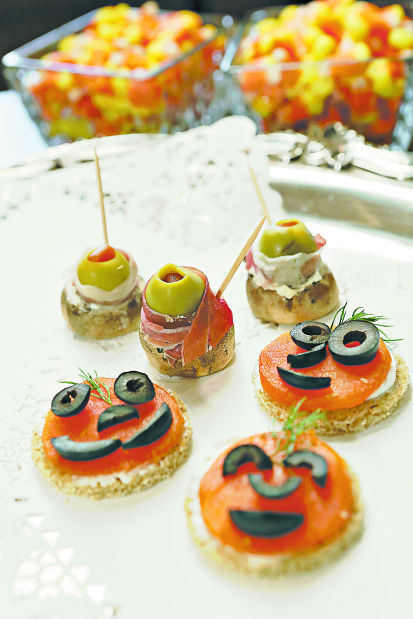 How’s this for pressure: Chef Michael Neylan has cooked for Martha Stewart.﻿

So when we asked him for a couple of tasty recipes for Halloween parties, he was cool and nonchalant about it.

And for the record: Neylan was not stressed-out when he prepared food for Stewart, just one of the many celebrity clients he cooked for when he owned Party Time Catering in Stamford, Conn. The company prepared food for people flying on private jets on the East Coast.

So seven years ago, he and his wife closed down the business, packed their pots and pans, and moved west, settling in Oro Valley.

Now Neylan, 45, does restaurant consulting and is a personal chef for about 15 local clients — he prepares and delivers weekly meals for them. This once-busy chef, who wouldn’t blink at whipping up a meal for 1,500, is in a low-key state of mind mixed with some solid bliss.

After all, he’s doing what he loves.

Neylan remembers the first meal he cooked at home — sausage in peppers. He was 14. By 15, he had started cooking professionally. The glamour never attracted him — the cooking did.

“I enjoy the whole aspect of it,” he says. “I love being in the kitchen with the sights and smells and sounds. I enjoy the creating.”

While big parties are behind him, Neylan still has a few tricks and treats up his sleeve.

His biggest trick: “Prepare what you can in advance; otherwise you’ll spend the whole time in the kitchen.”

He also suggests not being too hard on yourself. If you aren’t the artistic type, don’t fret over a dish not looking perfect.

But that’s another trick he has: He knows how even the most unartistic among us can put together a perfect-looking Halloween party dish.

His Creepy Skewered Olive Eyes” (he loves coming up with names for dishes) can be made in advance and served at room temperature. The Jack-O-Lantern Smoked Salmon Canapes are bite-sized treats perfect for a Halloween buffet table. And both the recipes are simple to make.

And a centerpiece? He recommends keeping that simple, too: “A small gourd inside a crystal vase.”

Even Martha Stewart would approve of that.

Cut out the cocktail bread with a 1 1/2 round or pumpkin-shaped cookie cutter. Spread a light coating of the crème fraiche or sour cream on the cut-out bread. Use the same cutter and cut out the smoked salmon. Lay on top of the bread. Take the olives and cut out eyes, nose and mouth shapes and arrange them on top of the smoked salmon. Use a small sprig of dill on top for the stem of the pumpkin. Serve cold.

These can be made an hour before serving but not much longer — the bread can get soggy.

Preheat oven to 350 F. Remove stems from washed mushrooms and place the caps on baking sheet with parchment paper on it (parchment keeps them from sticking to the pan and also makes cleanup easier).

Bake for 8-10 minutes, until just cooked. When the mushrooms are cool, put 1 teaspoon herbed cheese in each. Wrap olives with prosciutto so the pimento is still showing. Place olive in mushroom with pimento side facing up. Push toothpick through mushroom on the side to secure olive to mushroom cap. Serve at room temperature.

Dear Amy: I just found out (from reading an exchange of text messages) that my husband of 40 years has reconnected with an old girlfriend.

Dear Amy: After we divorced (decades ago), at some point my ex-husband told me that he was the father of another boy (he and I have two sons).

Dear Amy: I have been invited to a family event. One of the other guests, a relative, was recently arrested for possessing child pornography.

The hard seltzer craze has come to an end

The once unstoppable growth of hard seltzer has gone flat.

Ask Amy: Mother wonders if daughter is too happy

Ask Amy: This woman's place is in the home — alone!

Dear Amy: I am a wife to a good husband who is 12 years older than I am.

Ask Amy: Is it appropriate to ask about vaccination status?

Dear Amy: Recently a couple with whom my husband and I were casual friends some years ago moved to our city.

My Pet World: Out of sight, out of mind best for pets who don't get along

Dogs coming to visit and my cat's in attack mode.

Dr. Roach: What's the source of cracking sound in ear?

DEAR DR. ROACH: About two or three months ago, I got a cracking sound in my right ear, and it hurts off and on. This happens several times a d…

Stop the bite: Mosquito prevention in your Tucson garden

Mosquitoes thrive during the Tucson monsoons and can spread diseases. Find out how you can reduce their numbers in your yard.

﻿Personal chef Michael Neylan shows some of his Halloween-themed Creepy Skewered Olive Eyes at his home in Oro Valley. Seven years ago, Neylan moved here after running a fast-paced catering business in Connecticut.