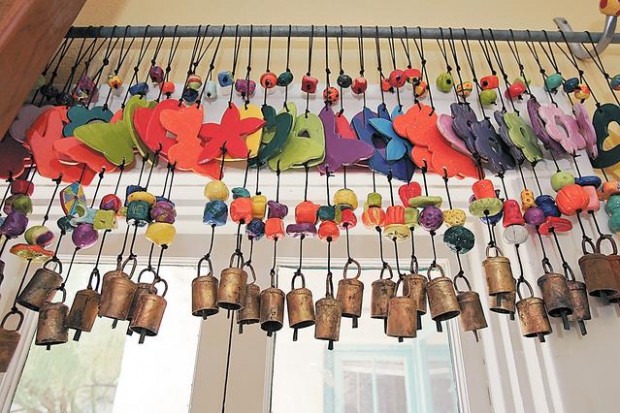 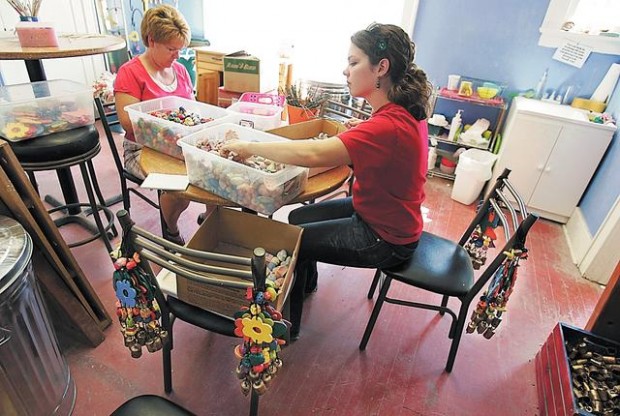 Eight years ago and 2,130 miles away, the iconic towers shook and collapsed.

Today, a group of Tucsonans will be in New York to help show that time and distance haven't obscured the memories of the tragedy of Sept. 11, 2001. With the help of hundreds of middle-school students, they'll make their way throughout Manhattan and other boroughs, leaving 600 small, colorful bells for strangers to find, with simple notes attached reminding people to be kind to one another, to help ease our communal pain.

It's the latest distribution of the local Ben's Bells project, begun in 2003 by a Tucson couple who wanted to find a way to honor their son — he had died of croup just before his third birthday — and encourage the kindness shown them in their time of loss.

They've since distributed more than 13,000 Ben's Bells throughout Tucson and elsewhere, including a still-devastated New Orleans two years after Hurricane Katrina and at Virginia Tech on the one-year anniversary of the shooting that left 32 victims and the gunman dead and two dozen others wounded.

"For the people who lost their family members, their close friends, their world, that day, the pain is still very real and very much a part of who they are," said Ben's mother, Jeannette Maré-Packard, of the motivation for a New York distribution.

"We just want them to know that we still recognize the impact and that we care."

Like many people, Maré-Packard likens her personal loss to the 9/11 attacks. She understands how someone's whole world can come apart at its seams, how something so perfect and seemingly untouchable can disappear, how eventually life is expected to go on, but how in some ways it never does.

"For me, losing Ben was my September 11," she said. "I will never forget anything about the day he died, just like the people in New York City who were so directly affected by that day will never forget. We want them to know we haven't forgotten, either. It's years and years now, but we know that doesn't erase the pain. All you can do is offer love and support, and that's what we're doing."

Maré-Packard will have much help.

This morning, she will go to Kings Collegiate Charter School and talk to students about the project and the reasons behind it. Afterward, students will take 100 bells to the streets of Brooklyn and leave them randomly in special places. Students at three other schools that are part of the same charter school company — Uncommon Schools — also will distribute like-sized boxes of bells. Students at an unaffiliated school also will participate.

Then, Maré-Packard and three other Tucsonans — Bari Ross, president of the Ben's Bells board; Patrick Bradley, a former board member; and Leah Wahl, a volunteer with the project — will meet at Rockefeller Plaza. They'll work with about 20 New Yorkers to distribute 100 bells throughout Manhattan, including at Ground Zero and in Central Park.

"We've found that hanging Ben's Bells is a really unobtrusive way to show support for communities that are having a hard time," Maré-Packard said. "The bells represent connection and mutual support."

To the children involved, they represent an important lesson, said Jessica Goldberg, a fifth-grade Kings Collegiate reading teacher who helped make the partnership possible. She grew up in Tucson and graduated from the University of Arizona, where she became involved with the bells through a friend in her dorm. She moved to New York after graduation and worked with Teach for America, which took her to an English as a Second Language class in the Bronx. The students there made their own small distribution of Ben's Bells four years ago, and when Maré-Packard contacted her recently about a 9/11 event, she knew she wanted to be involved.

Now that she's part of the charter-school company, she knew she could make it into a widespread effort, too.

Students have been studying the project and talking about kindness in general, she said, which fits in with the overall mission of the schools. They serve families in low-income communities and are designed to give students an alternative to traditional public schools — and demand that they learn character as well as academics, and that everyone expects them to go to college and be great citizens.

Students also are studying issues in the neighborhoods where they'll distribute bells, and learning what they can do to fix what's broken in the communities.

"When they're given the chance to do something wonderful, they really rise to the occasion," Goldberg said of her students.

She thinks the effort will mean a lot to many people in her adopted city, too. People don't talk about 9/11 as often as they did when she first arrived in New York, but Goldberg said there's still a strong presence to it, particularly in Manhattan. And even though her students were very young that day eight years ago, almost all of them know what happened, she said.

"Most of them know about it and have some kind of connection to it," she said. "I feel like they're very aware of the impact that the event had on people."

Maré-Packard also hopes the children will hear an important message in the bells. "I hope this experience will be powerful for them, symbolically powerful, of the fact that even though they're children, they really have the ability to make a difference through kindness."

The Ben's Bells Project began in March 2003, one year after Ben Maré Packard died of croup, just before his third birthday. His family hopes it reminds people to be kind, to help ease one another's pain.

Since then, thousands of bells have been left around Tucson — and the world — for strangers to find. There also are weekly "bellings," of people who are making the community a better, kinder place to live.

The New York distribution will mean 13,860 bells have been given away. Another 500 will be distributed throughout Tucson at the end of September.

To learn more about the project, read stories from recipients, and find out how you can make bells, go to www.bensbells.org or call 628-2829.

Contact reporter L. Anne Newell at lnewell@azstarnet.com or at 573-4198.

I am new to Arizona. I was born in London, have lived in Israel, New York and, most recently, Las Vegas. I am now a Rabbi of a synagogue here …

Unity isn't about sameness, it's about the end goal

Tony Evans writes: “If a football team is unified, it does not mean that everyone is playing the same position. It does mean everybody is goin…

‘Wait for it!” Neil Patrick Harris’ character (in “How I Met Your Mother”) said it 40 times, and turned it into an oft-repeated, popular expression.

How to keep your pet safe during winter

Survey: Senior adults are not excited about going to the doctor

Survey: Senior adults are not excited about going to the doctor

Should you buy a real or fake Christmas Tree?

Should you buy a real or fake Christmas Tree?

Your guide to the words on your Christmas turkey packaging

Your guide to the words on your Christmas turkey packaging