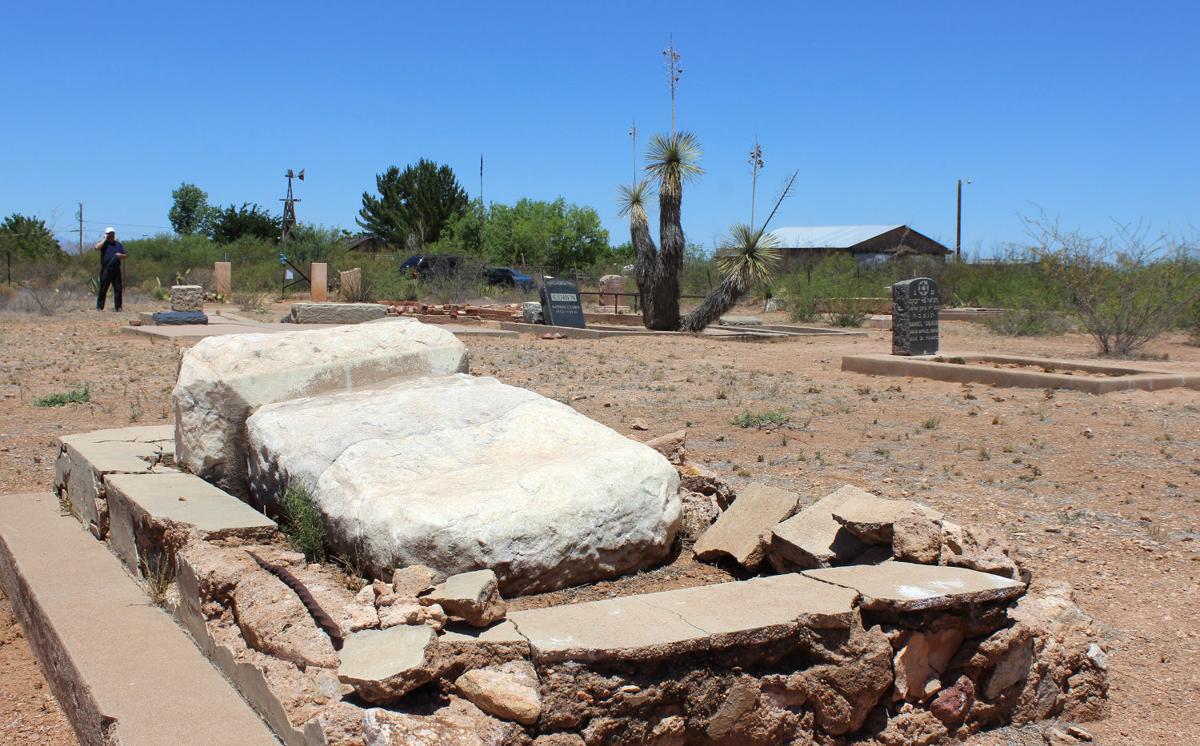 A toppled headstone at the Bisbee-Douglas Jewish Cemetery marks one of many gravesites that has endured damage over the years. 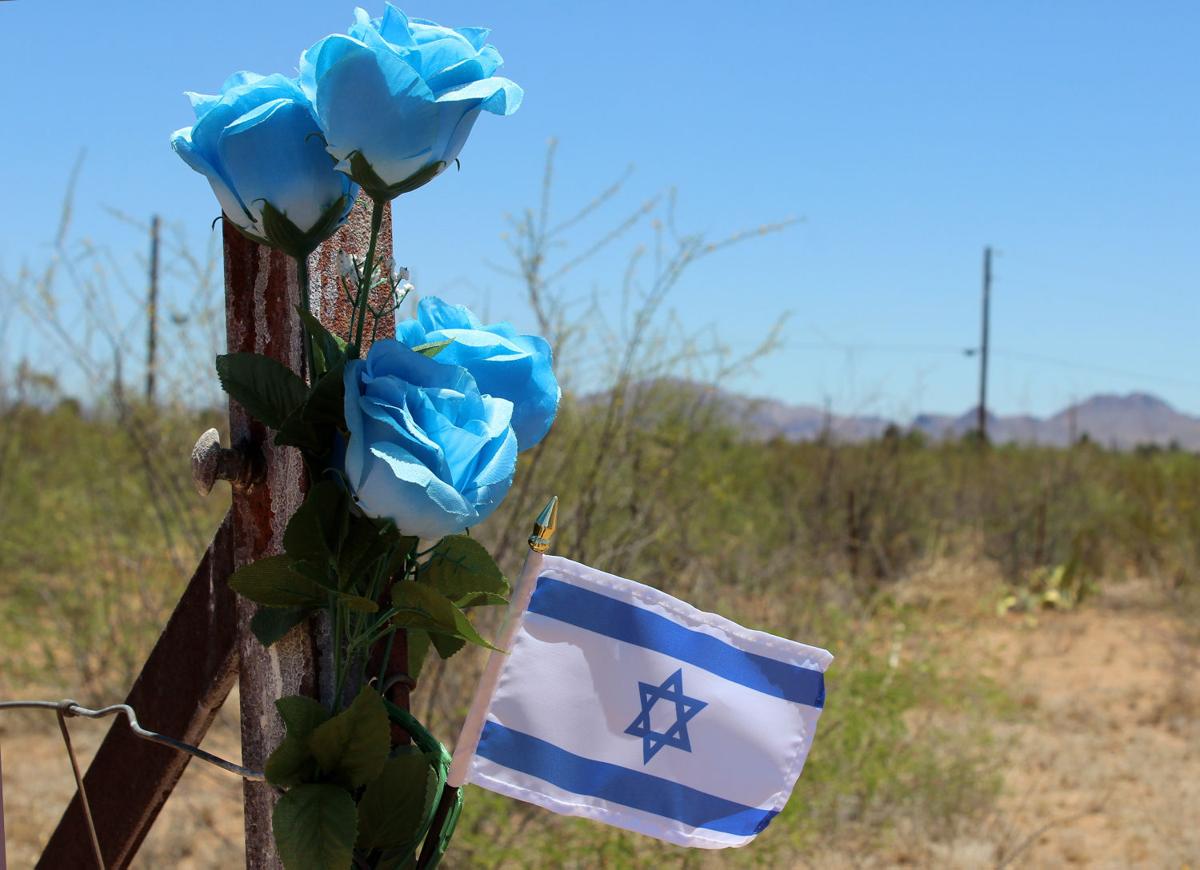 A cluster of flowers and the Israeli flag hint of a new start. 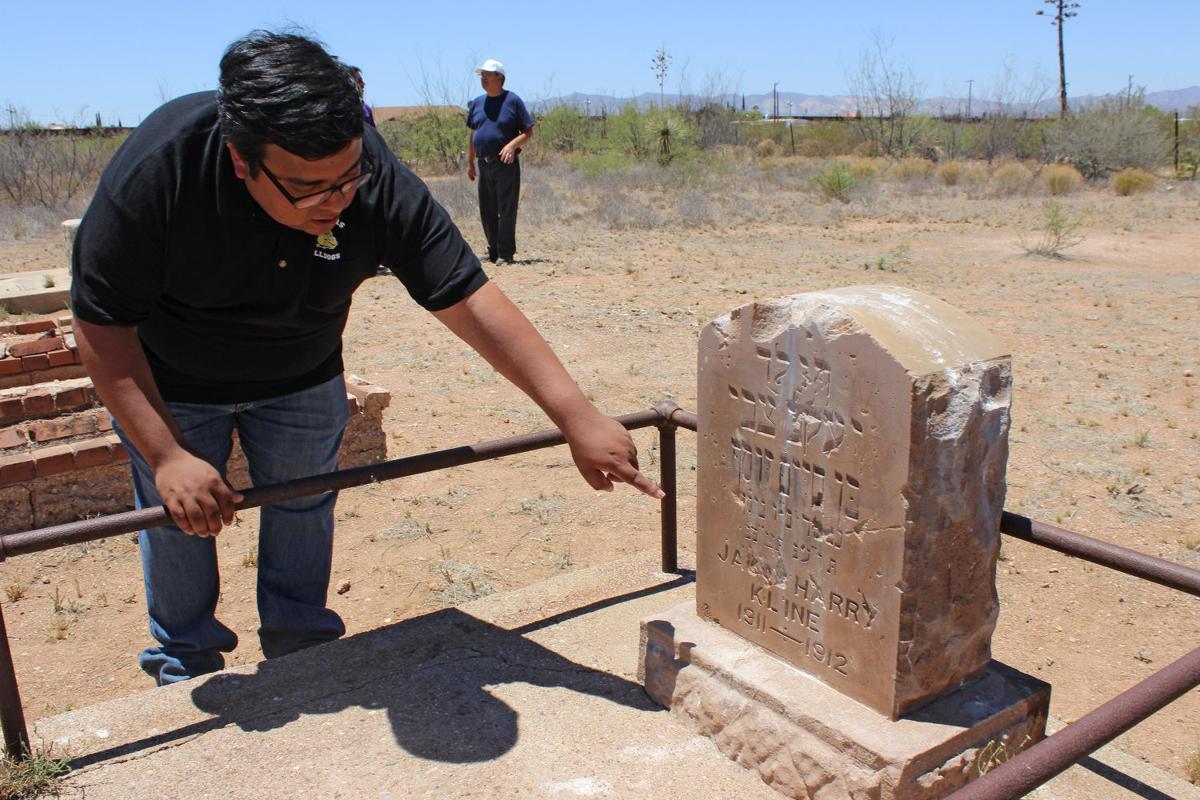 Abe Villarreal, a lead organizer of the restoration of the Bisbee-Douglas Jewish Cemetery, points out damage on a headstone. 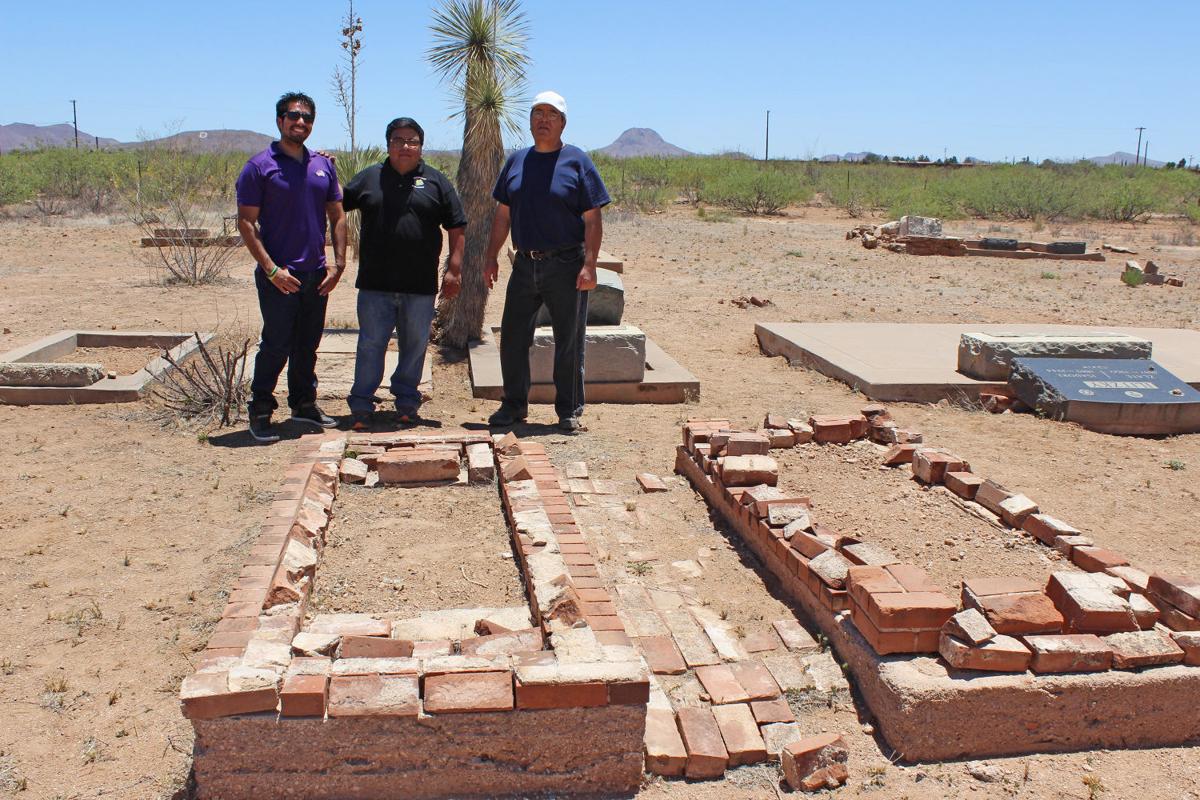 David Cota, 26, Abe Villarreal, 34, and Gilbert Marrufo, 62, want to see the deserted Bisbee-Douglas Jewish Cemetery restored to a place of dignity for the deceased. Marrufo has lived next-door to the site for 33 years.

Not many people know how to find the abandoned Jewish cemetery in Douglas.

The U.S.-Mexico border wall looms about 100 yards from the Bisbee-Douglas Jewish Cemetery. Off a dirt road, shattered glass and desert brush surround tumbled headstones that whisper of years of neglect and vandalism.

But those days could be over. A few blue, artificial roses and a small Israeli flag strapped to a post at the cemetery entrance suggest a new life for one of Arizona’s oldest cemeteries.

Someone finally has a plan for this place.

Abe Villarreal and about a dozen volunteers met at the cemetery on Sunday, June 12, to talk about restoring the site.

Among them was Barry Friedman, former president and a current board member of Tucson’s Jewish History Museum.

“When I went, I found it starkly beautiful even though it is in disarray and tombstones are turned over,” he said.

The Jewish History Museum has owned the property since the end of 2014, when it was donated to the museum.

“It’s a very interesting possibility thinking about it as a way to broaden our exposure to the Jewish community in Tucson and do outreach to a part of the state that we historically look at but don’t have much down there,” Friedman added.

The cemetery has 13 identifiable headstones and 19 known graves with burial dates ranging from the early 1900s to the 1960s. Villarreal believes there are additional graves hidden at the site, specifically at points throughout the cemetery where wooden stakes were driven into the ground. He estimates the property to be about a half-acre in size.

“It’s important that we do the research because we could get to the point where all the information is lost to history,” Villarreal, 34, said. “If there are some descendants in the area … we want to connect with them.”

In addition to research, his plan has three parts: Put in a fence and gate, landscape and beautify the site and repair and replace damaged or missing headstones.

Villarreal’s mission to resurrect a cemetery is only a few weeks old. Although he grew up in Douglas, he now works at Western New Mexico University in Silver City as the director of communications.

It was on a recent trip home that an old memory of the cemetery — abandoned even then — surfaced. He drove dirt roads until he found it. Villarreal is a Christian, not a Jew, but the Southwestern history of the spot resonated with him.

“It’s my hometown, and it’s a cemetery, so it’s a sacred space,” he said, adding that some of the people buried in the cemetery may have played fundamental roles in the 1901 founding of Douglas. The cemetery was established around the same time.

It is the final resting place for Berkowitzes, Greenbergs, Ilitzkys and others.

Nathan Cohen, the stepfather of the Levy brothers, founders of the Douglas-born department store, is also buried there.

Cindy Hayostek, a historian with the Douglas Historical Society, guesses the Jewish community in the city reached its peak during the World War I era and planned to build a synagogue. That never happened, and today there is not a significant Jewish population in Douglas.

Jorge Ilitzky, a rancher in Chihuahua, Mexico, has family buried in the cemetery. He was born and raised in Mexico City.

“My family, we had a store over there in Douglas, and that’s what we did for a living,” Ilitzky, 52, said. “So those were people who made history in that part of Arizona.”

Ilitzky, along with Tucson Jewish community member Richard F. Rosen, owned the property for about 10 years before donating it to the Jewish History Museum.

Rosen, 72, and Ilitzky purchased the property in 2005 from Congregation Anshei Israel of Tucson. Rosen, who has dual citizenship in Israel and the U.S., was moved by Ilitzky’s personal connection to the site.

The Tucson synagogue, which is 86 years old, didn’t even know it owned a cemetery in Douglas.

“No one here knew at the time, and there is no one to ask anymore,” said Rabbi Robert Eisen at Congregation Anshei Israel.

But Rosen and Ilitzky found it challenging to preserve the decaying cemetery on their own. Rosen thought a nonprofit such as the Jewish History Museum might do better.

In addition to donating the site, Rosen plans to make financial contributions toward the cemetery’s restoration. He would like to see his son, who died in 2012, honored at the cemetery. Landon Rosen was 20 when he died.

“This cemetery, it’s sad but interesting,” Rosen said. “You look at it, and there is a spirit there. It’s a little place where there has been vandalism, and we have to stop it.”

Bryan Davis, the executive director of the Jewish History Museum, is beginning to talk with architects and curators about “what we can do to better define property lines and mark it really as a sacred space.”

Davis said the museum might organize formal trips to the cemetery, and the topic of resuming burials there “remains an open discussion.” The maintenance of the latter option would be challenging, Friedman noted.

Villarreal has set up a GoFundMe account to raise $5,000, but the project will likely cost more and last several years. The Jewish History Museum also plans to provide some funding.

Although Villarreal has not met with the full board, he plans to work with the museum every step of the way.

“It’s simultaneously barren and beautiful to see that Jewish iconography in this very desolate desert, with the border wall right there in the background,” Davis said.

This is not the first attempt to restore the cemetery.

In the early 1990s, a group of University of Arizona students, led by former Arizona Daily Star sports editor Abe Chanin, joined others in Cochise County to clean up the site, said historian Hayostek.

Following that effort, the cemetery was rededicated on April 25, 1993, “to the Memory of Jewish Pioneers of Cochise County,” reads a commemorative plaque.

But with no security at the site, vandals returned.

“I can remember the thing from the ’60s, and it was always kind of an orphan,” Hayostek said. “There was really nobody to care for it, and it was in kind of a remote part of town.”

Larry Westbrook, 53, lives in Chandler but plans to return to his hometown of Douglas to volunteer for this round of cleanup. He remembers the stories — tales of seances and parties amongst the tombstones, hidden by the dark of night.

Westbrook said in his memory, the cemetery has never been landscaped. The desert has always prevailed.

Although also not a Jew, Westbrook still plans to make the monthly trips to volunteer meetings in Douglas.

“It’s just something to give back to the community,” he said. “It’s the little town where I grew up. I love that place.”

Watch Now: Photos you should always have on your phone

Learn how to read Hebrew

In Fort Lowell, the ties that bind include an old cemetery

For the second year, descendants of early settlers will gather for Día de los Muertos at tiny resting place.

Abandoned Jewish cemetery in Douglas to get new life

The abandoned Bisbee-Douglas Jewish Cemetery just 100 yards from the U.S.-Mexico border is more than 100 years old, and a group of volunteers …

Tucson church gets back to 'monastic sense of things'

Services have a more casual feel than many other churches.

Tucson historian shares his love of state's past

For 30 years, he has made Arizona's history accessible.

Tucson genealogist Amy Urman unearths some of the symbolism headstone hunters use to learn more about the deceased.

The Gospel and Dr. Seuss. The Torah and wine. Religion gets creative during summer.

Got a question on Judaism here? Ask Jewish Tucson's concierge

A roundup of what’s going on in Tucson’s faith community.

BRIEF: Jewish History Museum positions itself as 'center of conscience'

Church uses summer to collect, give back

Spend a lunch hour with the rabbi

Pets to be blessed at Jewish congregation

Grab the book. Eat some brunch.

A toppled headstone at the Bisbee-Douglas Jewish Cemetery marks one of many gravesites that has endured damage over the years.

A cluster of flowers and the Israeli flag hint of a new start.

Abe Villarreal, a lead organizer of the restoration of the Bisbee-Douglas Jewish Cemetery, points out damage on a headstone.

David Cota, 26, Abe Villarreal, 34, and Gilbert Marrufo, 62, want to see the deserted Bisbee-Douglas Jewish Cemetery restored to a place of dignity for the deceased. Marrufo has lived next-door to the site for 33 years.